You are here: Home / Blog / Adventures in Legoland

We received free tickets in exchange for my honest review of the Legoland Discovery Center, and all opinions are my own.

A couple weekends ago, we decided to take the family to the Legoland Discovery Center in Shaumburg, IL. It’s not too far, and we thought we’d also hit IKEA, and make a day out of it. That way mommy gets a little fun time (shopping) and the rest of the family gets some fun time (playing with Legos.) Win. Win.

IKEA didn’t turn out exactly as planned, which you can read about HERE, but we had a lot of fun at Legoland. 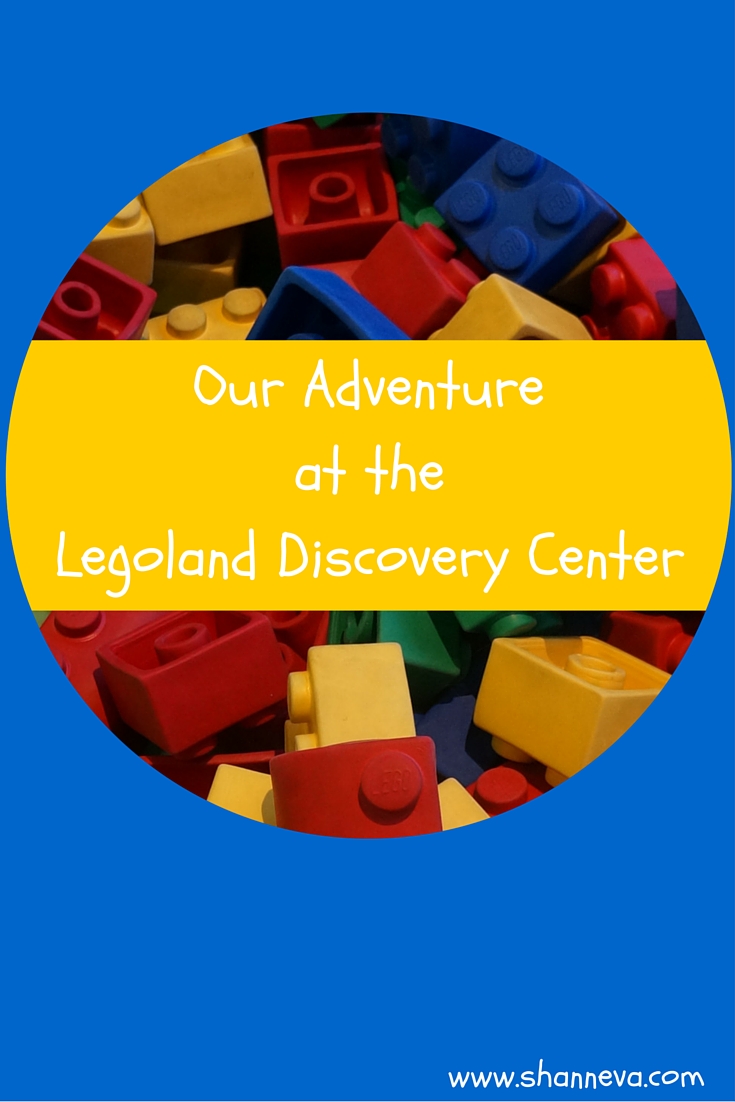 My oldest is obsessed with Legos. He is always building something. Lots of towers, big cities, bridges, and plenty of landmarks. The boys’ Aunt was babysitting, and they were going to watch the Lego Movie. There were ads for Legoland, and everyone wanted to go. Even though there is a huge theme park in California, we found the Legoland Discovery Center right in our own backyard.

After a little bit of crying and whining at IKEA, it was time to get to Legoland. It was easy to find, located in the Streets of Woodfield in Shaumburg, IL. There’s a huge shopping mall, Woodfield Mall, and plenty of places to eat all around the area, in addition to IKEA. We parked in the lot and headed in to get our tickets.

If possible, I suggest buying your tickets online ahead of time. You get a discount, and can choose the exact time/date of your visit to guarantee you get to go when you want. Our tickets were waiting at will call, so we were able to get right in.

As soon as you enter, you can take a family picture, with a green screen background. It was cute, but not everyone was looking (per usual) so we didn’t purchase one. At the end you have an option to get the picture put on a key chain.

I have to say that I was most impressed at this exhibit. It was an exact replica of Downtown Chicago all done out of Legos. It was amazing to look at. We all took turns recognizing the things we had just seen on our recent trip to the Shedd Aquarium. It also goes through an entire day, and the sun goes down, so you can see the city at night. My pictures don’t do it justice. The detail was amazing. 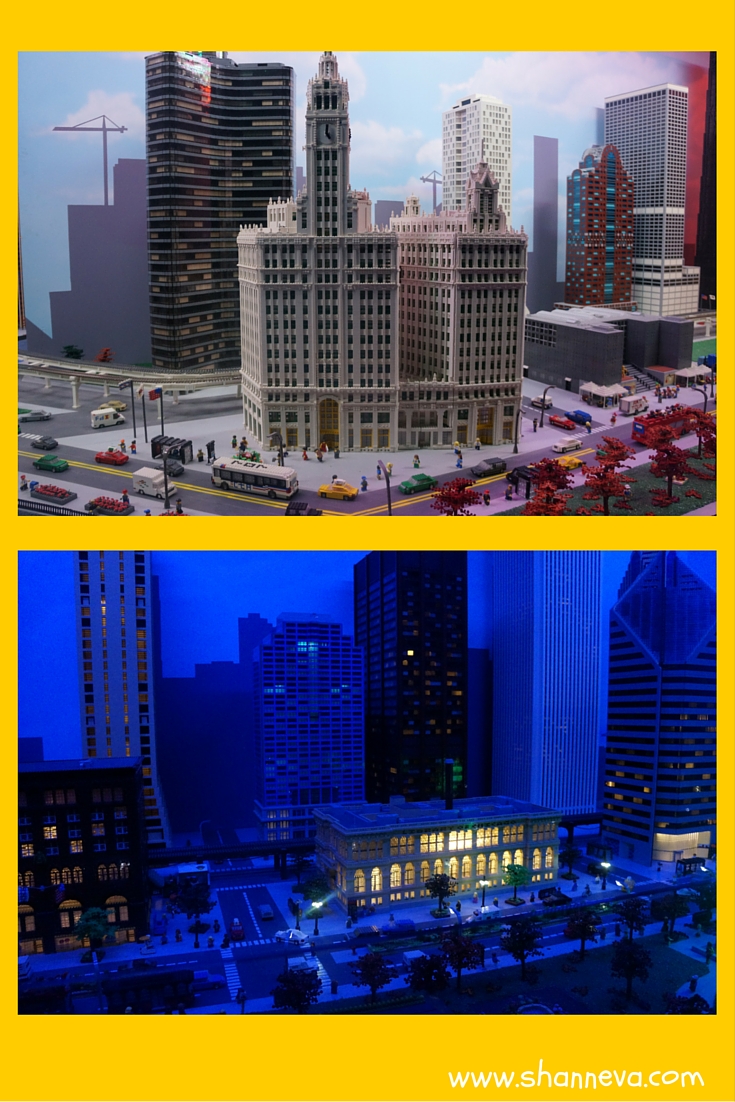 Next stop, we walked through the Legoland Jungle. There were tons of animals made out of Legos, along with palm trees, and jungle sounds. The boys all wanted to touch everything, and it was perfectly OK. 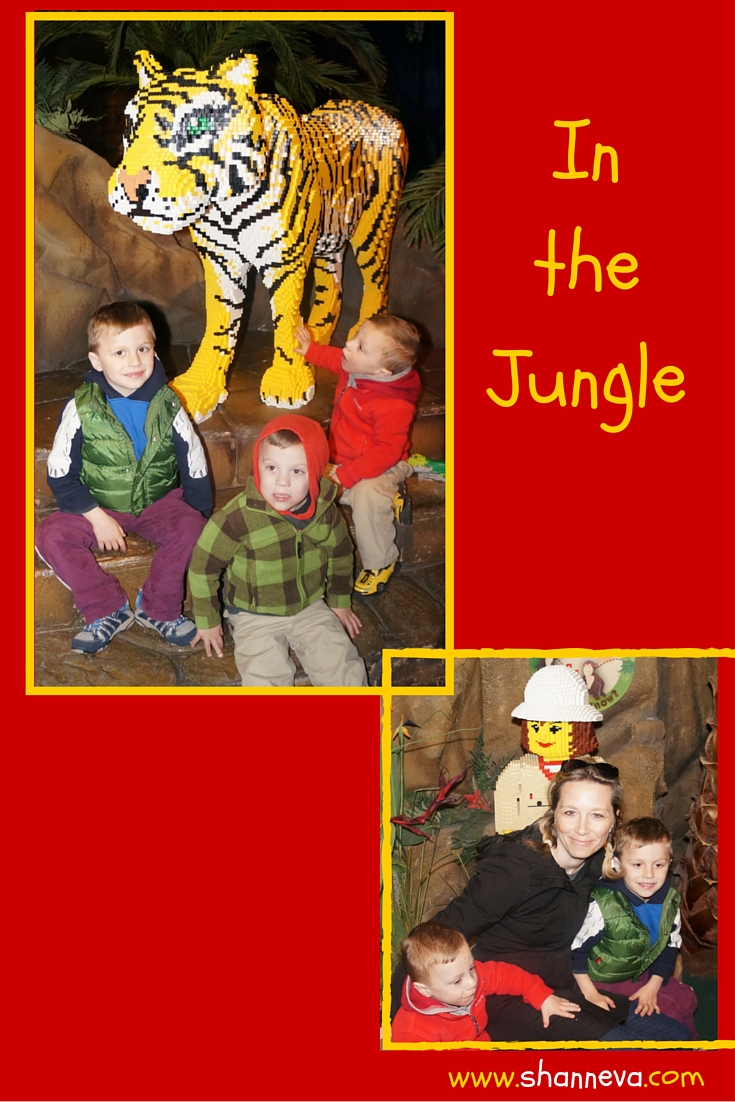 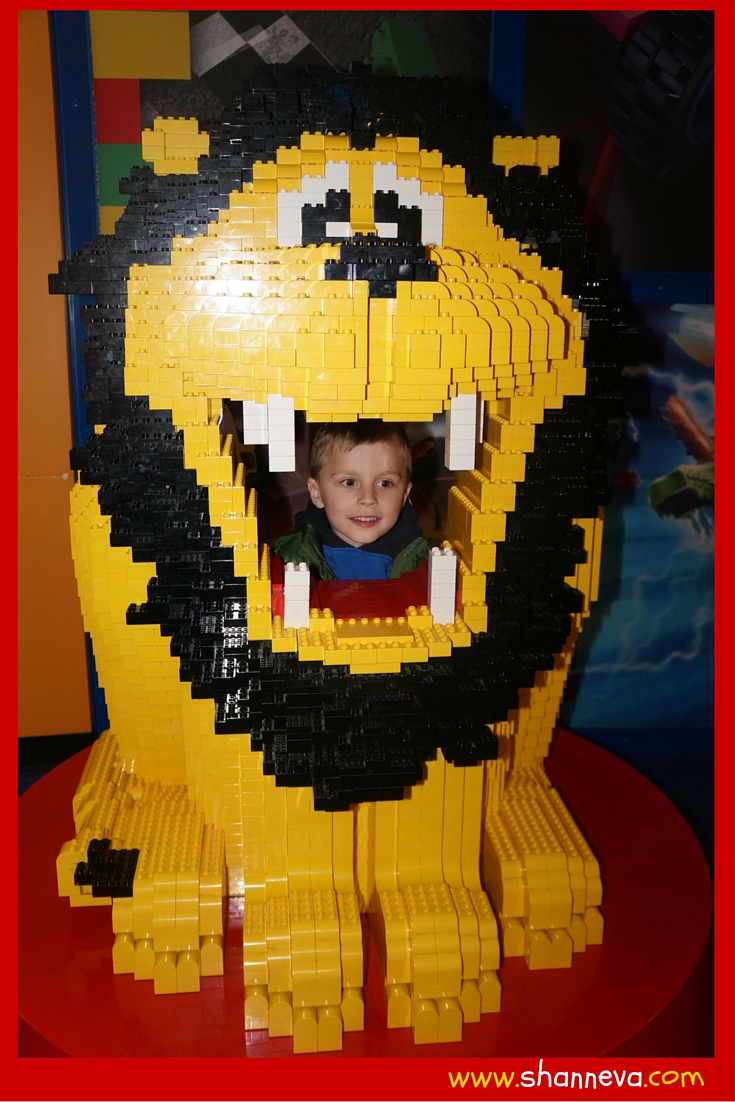 After we made it through the jungle, there was an area set up where the kids could play with Legos. They all had fun building. Even the biggest kid got into the act. 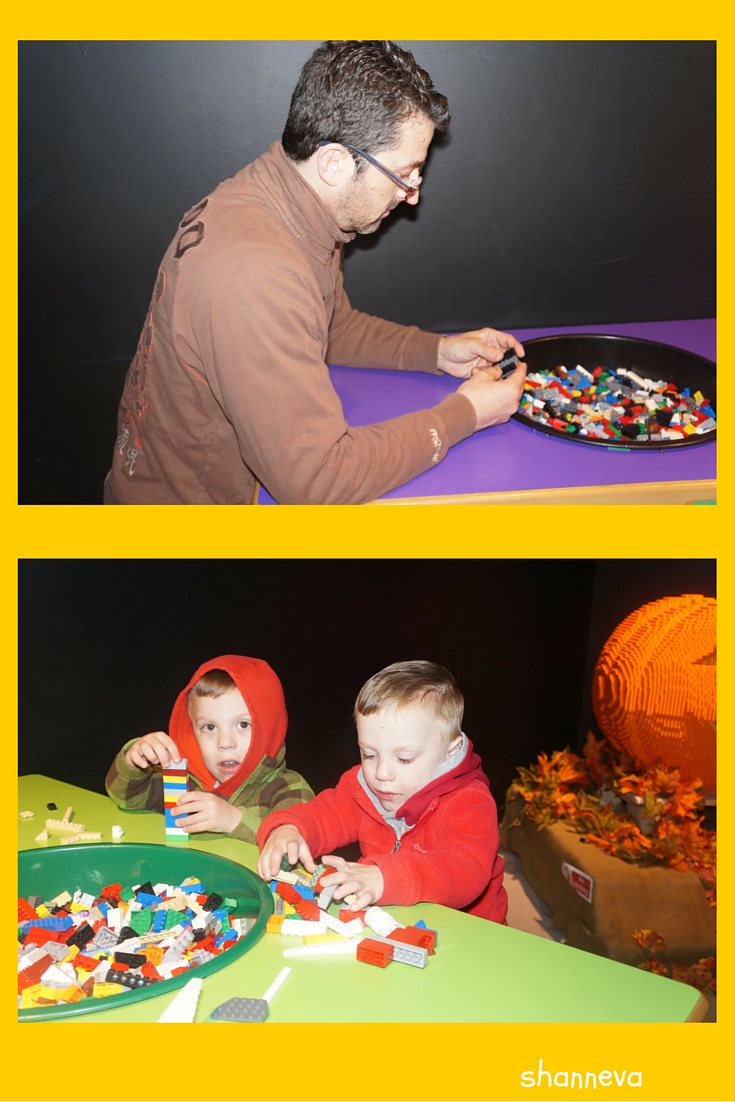 We finally got them out of the building center by showing them there were some rides. The really awesome thing about the Legoland Discovery Center is that everything inside is included in your admission. So, we could ride the rides as many times as we wanted.

The first ride was a dragon boat, and you got ray guns to shoot at the bad guys. It was called the Kingdom Quest, and the boys all had fun. Only my oldest really understood the laser gun, but the twins were having fun just riding and looking around.

The second ride was called Merlin’s Apprentice Ride. Each cart held two people, and you peddled the Lego peddles to go up and down, while it spun around in a circle. That ride was not for this mommy, so we took turns. My oldest and big guy went first, then my husband took my little guy.

My favorite part was watching my big guy watch his brother on the ride. They were both smiling and laughing as he went by. 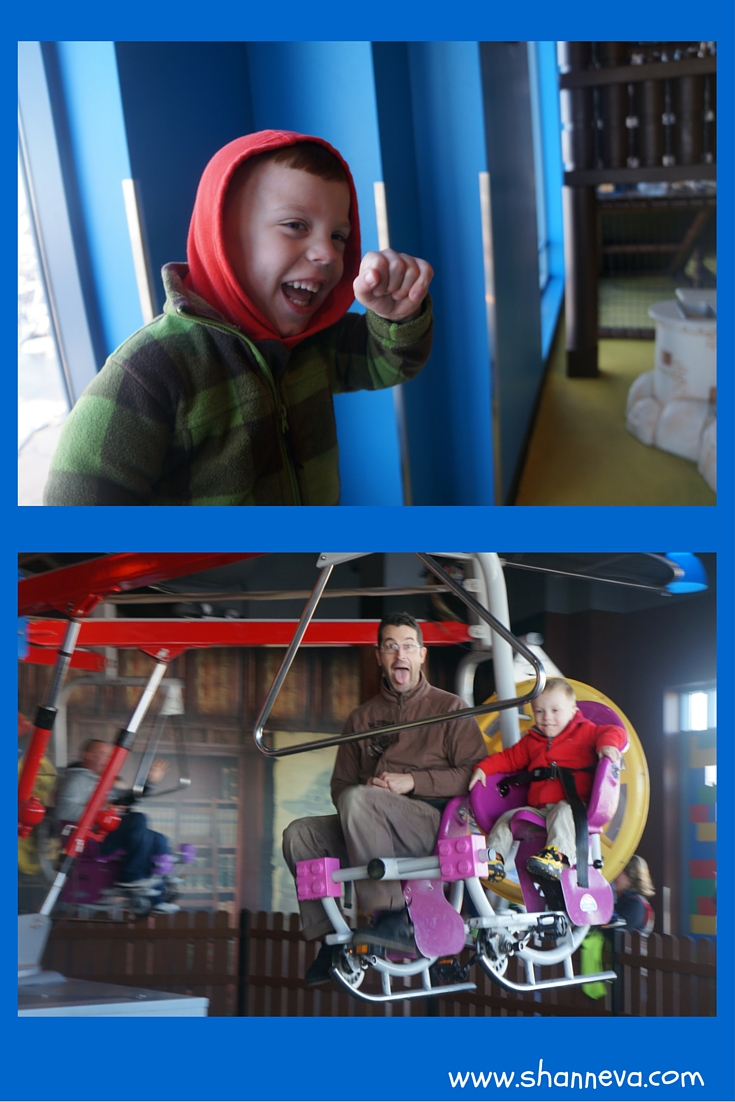 After they’d had enough rides, there was a huge area for the kids to play. There was a giant castle to build Legos on, and there was a huge piece of climbing equipment, like at a playground. There were tunnels, slides, and, of course, tons of giant Legos everywhere.

There was also Duplo Village where there were the bigger Legos, the Duplos, to play with. 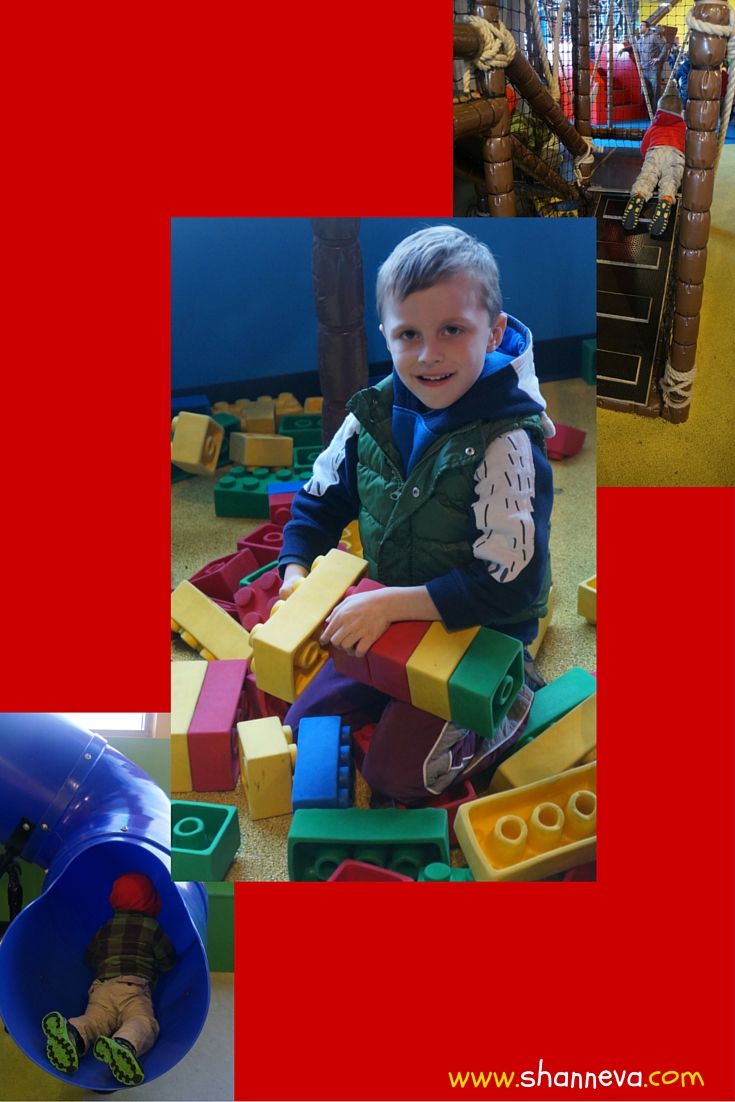 There was also a place to make Lego boats and float them in water, and a ramp where you could send the Lego cars you were able to build.

A Tour and A Movie

Once we finally rounded up everyone, we decided to go on the Lego Factory Tour. It was basically one room, and they showed the process of making a Lego. The guy who did the demonstration was pretty funny, and held 2 out of my 3 kid’s attention. The screamer had to go outside with Dad. At the end, they all got a souvenir Duplo that said Legoland Discovery Center, which was cool.

They also had a short Lego movie you could watch, but the kids were getting tired and cranky by this time. It was past lunch, and we decided to head out.

They did have a cafeteria, and lunch didn’t seem too expensive. They also had a gift shop that you walk through on the way out. And this guy… 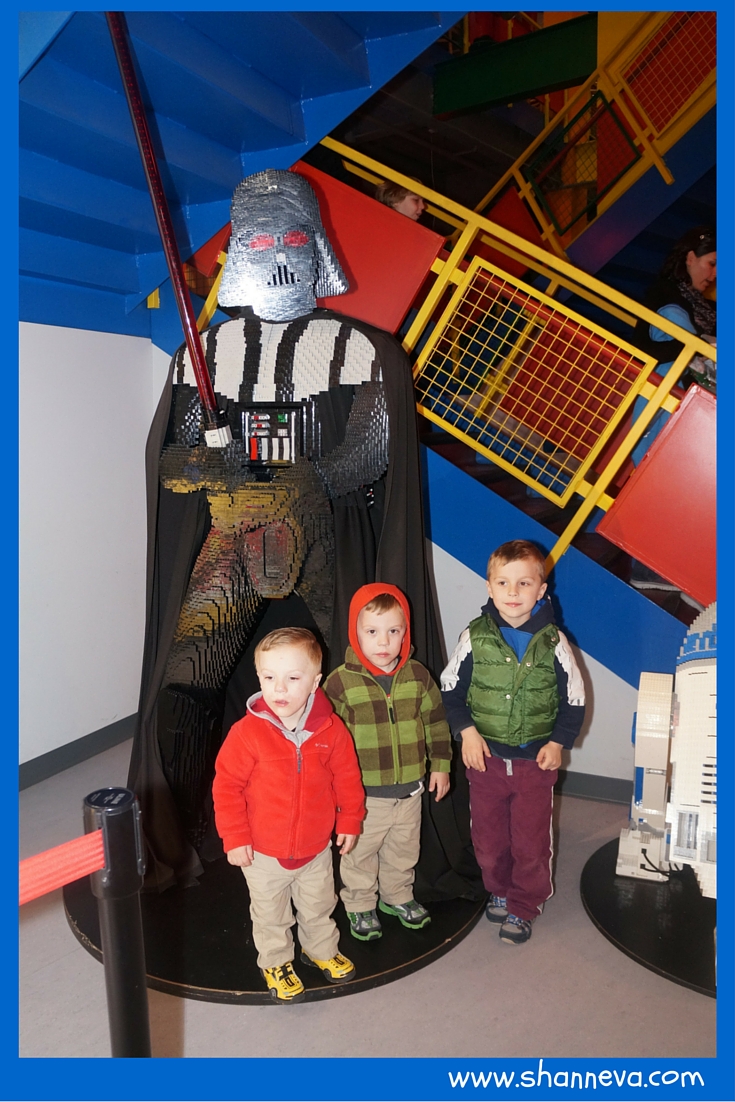 Overall, I would definitely recommend the Legoland Discovery Center. All three of my boys had a lot of fun, and they are ages 3 and 6. You can easily spend a couple of hours there. They also have party rooms, so if you live in the area, it looks like a fun Birthday party spot. From their website, it looks like they change-up exhibits often, so if you live close, a yearly pass might be a great idea.

If you’d like to read more about the Legoland Discovery Center, or find out if there’s one in your area, you can find out more on their website, https://www.legolanddiscoverycenter.com. They also have a Facebook page, which you can find HERE.

Have you been to a Legoland Discovery Center? Are your kids as obsessed with Legos as mine are?