You are here: Home / Blog / NICU Anniversary and cleaning house

A NICU anniversary is something special to preemie moms. It may bring up some mixed feelings, but it definitely brings relief and happiness too.

This Thursday and Saturday, August 1st and 3rd respectively, will be my boys “NICUversary.”  It’s their one year NICU anniversary or the anniversary to the dates that my boys came home from the hospital.  We’re throwing a big celebration to make up for the small first birthday party they had.  We figured since their first birthday was right out of cold/flu season, and since they weren’t really supposed to be born until August, the NICUversary party would be the perfect idea.  In my next post, I’ll recap the party, but for now, I want to give a little background on their experience in the hospital. 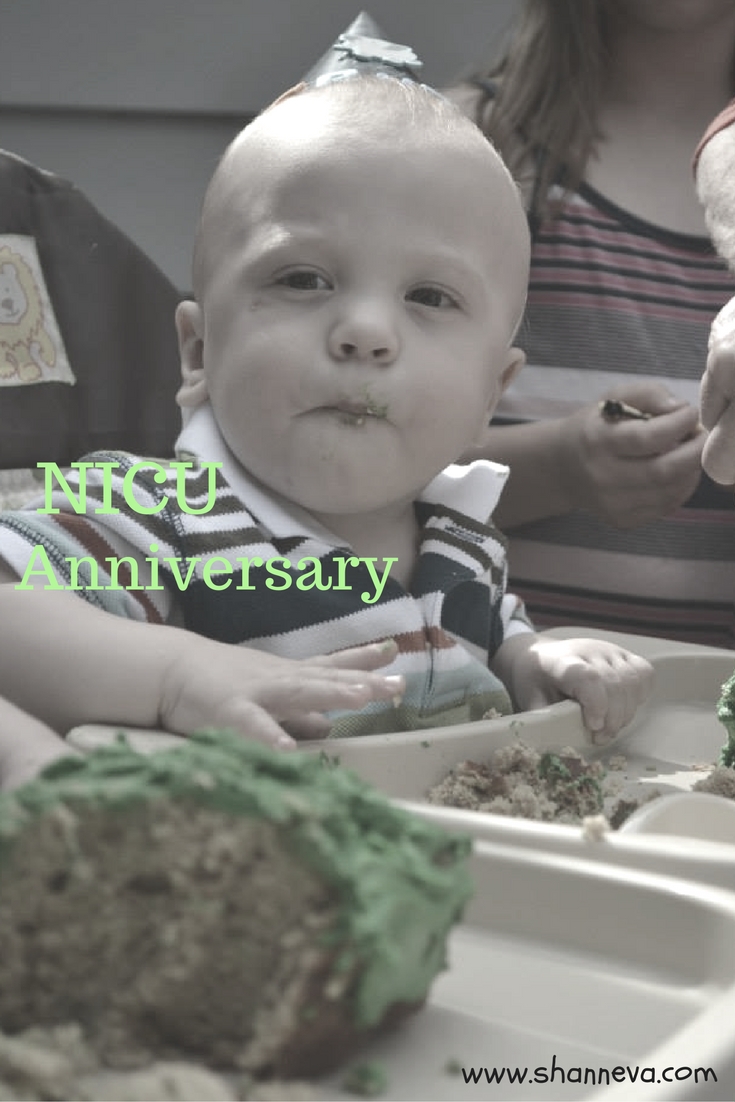 On August 1st of last year, my bigger twin, came home from the NICU after 91 days.  For those of you that luckily aren’t familiar, the NICU is the Neonatal Intensive Care Unit.  I refer to him as my bigger guy because he was 2 lbs 2 oz at  birth, a whole whopping 11 oz bigger than his brother.  Even though he was bigger, he still had his share of scary moments in the hospital.  He had a heart murmur caused by his PDA not closing at birth.

PDA stands for Patent Ductus Arteriosus. According to the National Heart, Lung, and Blood Institute, “Patent ductus arteriosus (PDA) is a heart problem that affects some babies soon after birth. In PDA, abnormal blood flow occurs between two of the major arteries connected to the heart. These arteries are the aorta and the pulmonary (PULL-mun-ary) artery.Before birth, these arteries are connected by a blood vessel called the ductus arteriosus. This blood vessel is a vital part of fetal blood circulation. Within minutes or up to a few days after birth, the ductus arteriosus closes. This change is normal in newborns. In some babies, however, the ductus arteriosus remains open (patent). The opening allows oxygen-rich blood from the aorta to mix with oxygen-poor blood from the pulmonary artery. This can strain the heart and increase blood pressure in the lung arteries.”

So, in order to get him healthy and able to eat, a heart surgeon had to come in and close his PDA.  Surgery on a baby is scary, but surgery on my 2 lb, 25 weeker baby was absolutely terrifying.

I remember the nurse telling us to be there at a certain time.  Did we want to baptize him first just in case?  ugh.  They would do the surgery right at his bedside, and it would actually take longer to set up and sterilize the area than the surgery.  Somehow, this did not make me feel any better.

The surgery did go well, and now my big guy has a cool looking scar to show how strong he was/is.  After that surgery, he still had to work on breathing on his own, gaining weight, and getting the blood vessels in his eyes to vascularize (I’m still not sure what that means,) but he did so much better.  That PDA really made his little body work hard, and with everything working normally, he was on the road to getting home.

My little guy did not have the PDA problem, thank goodness, but he had another nightmare of a problem, NEC, or Necrotizing Enterocoloitis.

According to kidshealth.org, ” “Necrotizing” means the death of tissue, “entero” refers to the small intestine, “colo” to the large intestine, and “itis” means inflammation…A gastrointestinal disease that mostly affects premature infants, NEC involves infection and inflammation that causes destruction of the bowel (intestine) or part of the bowel…”

He also had the same problem with his eyes, however, it was more severe, and it required laser surgery.  He would lose his peripheral vision, but it was either that or blindness.  Although it seemed like bad news on top of bad news at the time, whatever they gave him to prepare for the surgery seemed to help him finally get off the ventilator.  I think he was so mad he had to be intubated again, he decided no more tubes for me!  Seriously though, he really was mad after the surgery.  The nurse tried to give him a pacifier and he just screamed and threw it across his incubator.  After they were able to extubate him, he figured out this breathing thing that we all take for granted, and was on the road home.  He only ended up staying in the NICU for an extra day and a half!

All Together at Last

So, on August 3rd of 2012, I had my whole family back together.  It still sometimes seems unreal to me.  From the perinatologist telling us my little guy would never be big enough to be viable, to the neonatologist explaining the percentages of how many babies actually make it home if they are born that early (I don’t remember exactly…I think I was blocking it out,) to now having two healthy 15 month old beautiful boys.  A one year NICU anniversary is just amazing. I just have to pinch myself most days.  It also helps this sleep deprived momma keep awake.

With our struggles and heartache during this pregnancy and the months following, we’ve decided our family is complete.  I’m not sure I could take the anxiety of an ultrasound or even an OB visit again.  Plus, I’m already outnumbered 4 to 1.   Sooooo, I’ve been cleaning out my closet and getting rid of my maternity clothes.  It does make me sad to see them go, but it also makes me feel good to clean house a little.  The dress at the top of the post was one I wore when I was pregnant with my first.  I really didn’t get to wear any cute maternity clothes with the twins because I was I was on bedrest, then in the hospital.  I actually don’t even have any pregnant pictures with the twins because I was so terrified the entire time and didn’t want to have those pictures in case something happened.  Now that they are here and OK, of course, I wish I would have taken some.  But, the pictures I have of them now and having them physically here is better than any belly picture I could have put in an album.

I hope my boys have a wonderful NICU Anniversary!