You are here: Home / Blog / Micro Preemie Monday with Kim

Hello! Today’s Micro Preemie Monday story is a little different. Kim wanted to share the story of her preemie, but her story would not be complete without including her other 2 children, as well. We will start with Kim’s first pregnancy, which is her premature birth story, and then move on to her other two children in tomorrow’s post.

1. Tell us about your first baby.

54 days in the NICU & 13 days in Special Care (67 days total in the hospital). He came home 15 days before his due date (he was due Christmas day 2001). There were many really hard parts: not getting to hold him as much as I would have liked (either he was sick or I was too afraid to ask); having to leave him (he would be asleep the whole day & open his eyes as I was saying goodbye- it broke my heart). 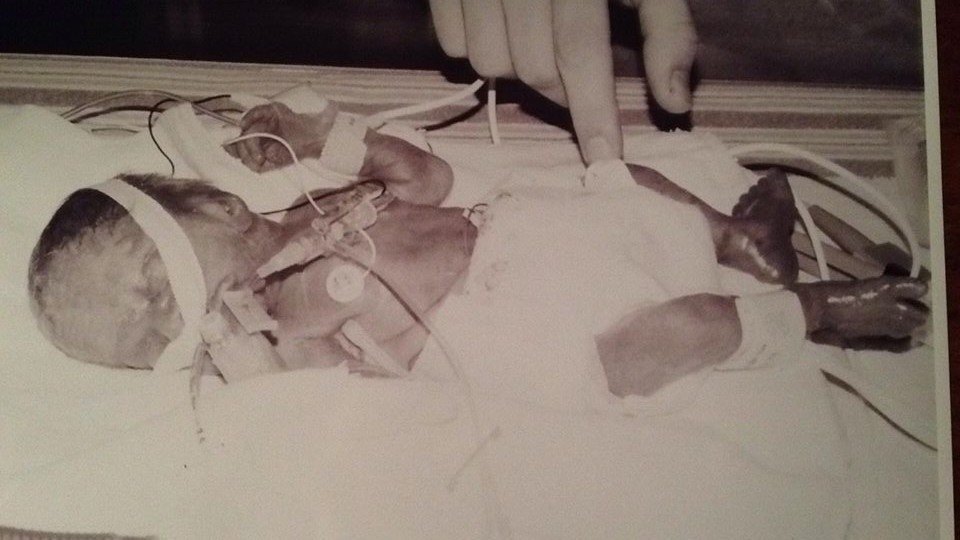 Caleb’s story starts at 20 weeks gestation. I had an AFP test show that our baby could have spina bifida. The ultrasound tech noticed that his head was long & flat, (squished), so I was sent to a specialist. The specialist told us that I had a placental abruption that healed its self & that the placenta was not working properly or making amniotic fluid, (that is why his head was flat, he only had a  dime sized amount of fluid). The specialist also told us that babies that have abruptions at 20 week are severely brain-damaged, that our baby would be in a vegetative state if he survived birth & if he did survive birth that he would be on life support until he was 2 years old then he would die.

I was put on bed rest at home to try to build up  amniotic fluid, but it didn’t work. I received my first round of steroid shots at 24  weeks to help mature his lungs. A few days later I woke up with a gush of fluid. We went to our local hospital (in Newton), the fluid stopped & the strip test showed that it wasn’t amniotic (however I know it wasn’t urine due to the color & smell).

At 25 weeks, I woke up with a gush of blood. We went to our local hospital, the bleeding stopped, I didn’t have contractions so I was sent home. Shortly after my husband left for work the bleeding started again. I was alone & very scared. So I started calling hospitals & I was told by all but one that there was nothing they could do. Wesley was the only one that told me to come in. So I had my husband take me to Wesley Medical Center (in Wichita – 15 minutes from our house). When I got there I was checked, but the doctor couldn’t see where the bleeding was coming from, so I was observed overnight. I was dismissed the next morning as the bleeding had stopped. My husband & I were taken on a tour of the NICU to help prepare us as we knew our baby would be premature. We were shown a baby that was the size our baby was at the time, (25 weeks). It was a lot to take in. There seemed to be a lot of bed, wires & tubes, but not much baby.

The next day I went to see another specialist & I was told that I could come in for daily non-stress tests & that they could not do anything for the bleeding. So I had myself admitted to Wesley Medical Center to monitor our baby & myself, (Sept. 10, 2001). That next day, (Sept. 11, 2001), was insane with all the nurses coming & going from my room as we watched in horror as the Twin Towers fell. While at Wesley we found out that our baby was a boy, (from an ultrasound), that he had no fluid & that I had gestational diabetes. I was put on strict hospital bed rest because there was a chance that I could have a prolapsed cord (I never did) & because I had PROM, (premature rupture of membranes). I was there for 3 weeks, I bled constantly (moderately to heavily), I received my 2nd round of steroid shots, (to mature his lungs), & I had contractions off & on during my stay that were controlled with Benadryl. While there I read every bit of information I could get on preemies & the hospital also had videos that I watched.

At 2:20pm on October 4th, 2001 I started having contractions that could not be stopped. After about 5 hours of being observed in Labor & Delivery my heart rate & blood pressure shot up & Caleb’s heart rate shot up. It was decided that I had an intrauterine infection, (I didn’t have a fever or any other symptoms of an infection). I was given the choice to receive pitocin & have a vaginal birth, (I had not dilated at all), or a c-section. I chose a c-section, because I knew he would have a lesser chance of brain bleeds.

4. How are you and Caleb doing now?

Caleb just turned 14 years old & he has no lasting effects from being premature. He is a normal, healthy boy who is an awesome violinist. He came home on a ‘wiff’ of oxygen, a pulse oximeter, an apnea monitor & reflux medication. He was only on oxygen & his monitors for 3 weeks. He was also born with congenital hip dysplasia & had open hip surgery at 7 months old. His doctor (who also had a 29 week preemie) stopped adjusting his age at 6 months old as he had caught up in size & milestones of a term 6 month old. He had another hip surgery & a knee surgery at 10 years old to correct his hip shape & allow his leg length discrepancy to correct itself. From the time he came home until 6 years old Caleb had: speech, occupational & physical therapies. He graduated from all three at 6 years old.

Caleb is an amazing blessing! He never had any brain bleeds, he did have 3+ blood transfusions, he had NEC that resolved with meds & his feedings being taken away, he also had a few other infections & chronic lung disease that he grew out of.

The only issues I have from his premature birth are physical, (scar tissue) & like many parents I do get emotional when hearing about babies being born premature. 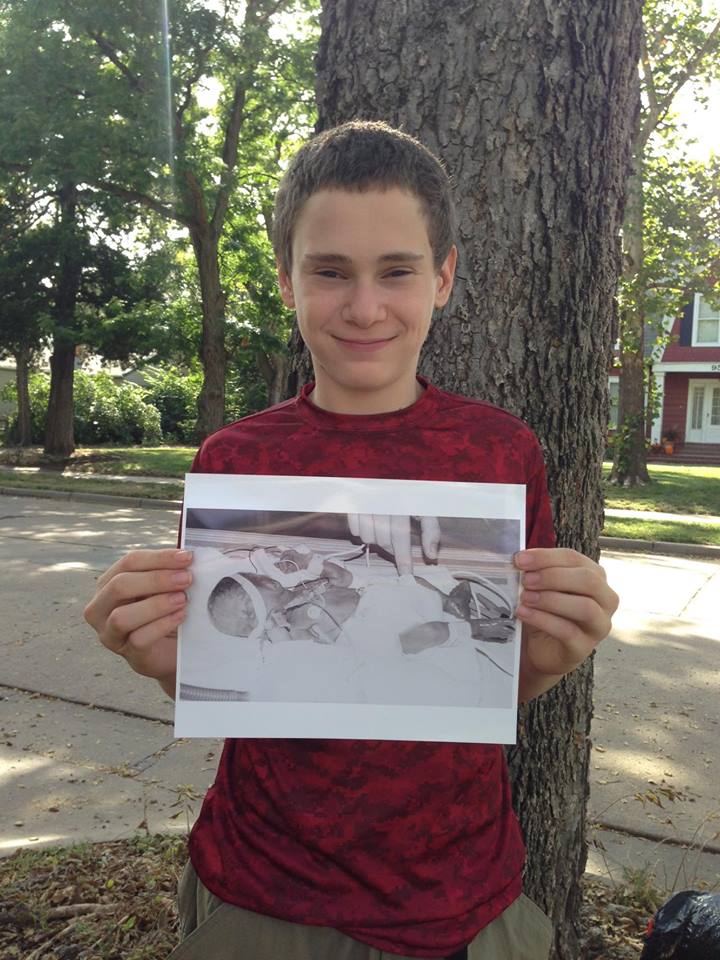 I had a preemie mom who supported me. I was able to call her at all times with questions & just to talk. Her daughter was a 23 weeker & she was 18 months old when Caleb was born. Find someone to talk to: a nurse, another parent, a therapist, anyone who will listen & support you. Don’t feel afraid to ask questions! You are your baby’s advocate! Hold your baby skin to skin as much as possible & for as long as your baby will tolerate. If you can’t pump or you dry up it’s not the end of the world. Your baby will be ok on formula or if you can get donor milk! I dried up when my son was about 4 or 5 months old after many months of pumping. At one time I was on Raglan to increase my supply while my son was on it for reflux. I did get to breast feed him of a few months.

Thank you for joining us today for Micro Preemie Monday. I hope you’ll come back and read the rest of Kim’s story tomorrow. I think it’s a very powerful story, and will help many other woman.

ps. It’s Kim’s Birthday today, so please feel free to leave her a birthday wish in the comment section. Thanks!