You are here: Home / Blog / An Old World Christmas and A Big Old Mistake

We’ve been pretty cooped up in the house lately since the boys all had colds.  Now that they’re on the mend, we decided we should have a family outing.  We wanted to do something Christmas themed, and my husband suggested Old World Wisconsin. I don’t remember the last time I was there, and it’d been a couple of years for him too.  It’s not too far of a drive, the weather was supposed to be warm (in the 40’s!!!) so we planned to go Saturday morning.

All week the boys had been asking for candy canes (not sure what started that) so to divert them from this, I might have mentioned we’d get them popcorn when we got there.  I figured it’s an theme-park like attraction, so they must have snacks, right?  When I used to work at Old Tucson Studios they would always have someone making kettle corn.  Popcorn was a safe bet.  WRONG.

So, after having Goldfish crackers, cheese sticks, and milk in the car, we arrived at Old World Wisconsin.  My husband dropped us off, then went to park.  I loaded the twins in their stroller, and let my oldest walk beside me.  There were a group of carolers, and one of the woman let my son hang an ornament on their Christmas tree.  So far, so good.

We went in the admission building, where they did have things to buy, but no popped popcorn.  There was popcorn kernels to buy, but that wasn’t going to work.  Luckily, we got out tickets and headed right into see “Father Christmas.”

Although there were still requests for “popca,” letting the twins out of their stroller while waiting indoors to see Santa seemed to distract them.  We’ve never had a picture with Santa before, so my oldest was pretty nervous, and the twins didn’t really want to get on this old guy’s lap.  So, mommy got in the picture, and it actually turned out! 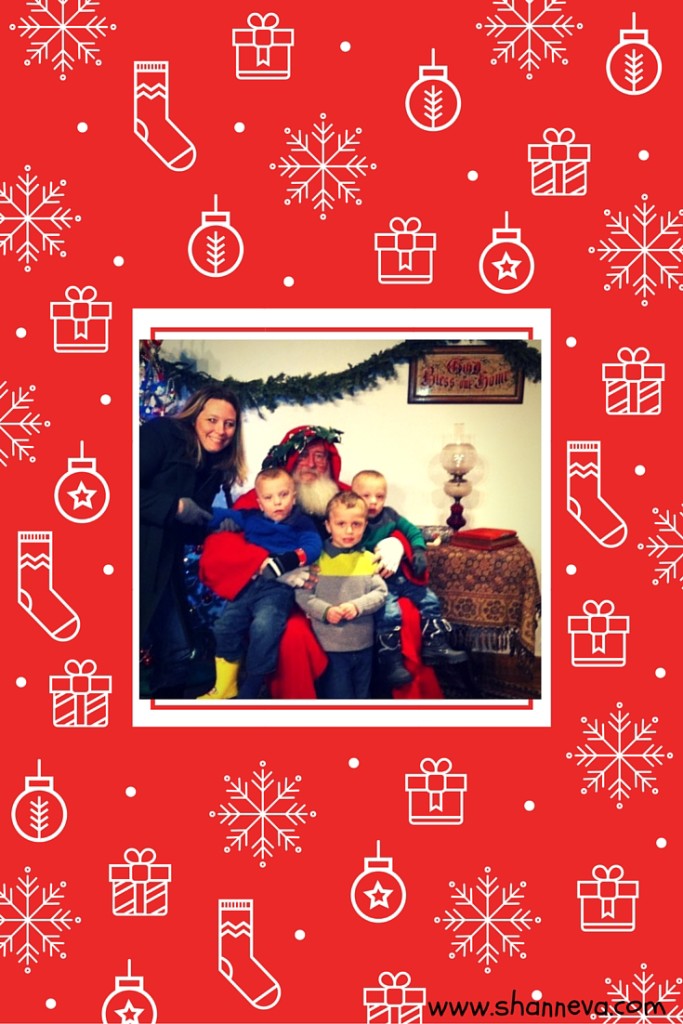 They then got to pick a toy, which was really great.  They all picked jingly bells, and we were off to the next stop.

We headed into the church.  At first, just more screams about the popcorn, but then they passed out songbooks and Christmas carols started.  They loved it!  The organ was playing, everyone singing, and everyone staying on mommy and daddy’s laps.

Unfortunately, that was probably the nicest stop of the day.  After that, we went to the blacksmith.  My oldest loved to watch, but it was so crowded, I had to take the screaming twins outside.  We then went for a horse drawn carriage ride, but of course, we just missed it.  Luckily, the next one came just 15 minutes later.  We went inside a building to wait where there were crayons and paper to make ornaments.  Again, perfect for my oldest, but the twins just wanted to grab the scissors and eat the crayons.

I took them back outside, and I could see the carriage on its way.  Even though there were still some cries for popcorn, the big “ponies” were cool enough for a little bit.

By this time, even mommy was getting hungry, so we decided to make our last stop the big barn where they served food.  It said chili, hot cocoa, and cookies, but I was still secretly hoping for some popcorn.  Nope.  Just bags of potato chips. Which, by the way, did not satisfy the twins.  Now, not only did they want popcorn, but they wanted their milk, which we left in the car.  Time to go.

On the way home, we stopped at the first gas station, got three bags of cheese popcorn, and had blissful silence for about 10 minutes.