Pumping, then Breastfeeding, then Pumping was a huge challenge for me as a mom to preemie twins.  It was a very emotional, exhausting process that caused additional stress in an already stressful time in our lives.

With my first son, I breastfed exclusively.  Sure, it was hard to get started, and I had my share of latching problems, soreness, and clogged ducts, but eventually we got the hang of it.  I nursed him up until he was almost two.  I really enjoyed the closeness and bonding of breastfeeding, and even though I was happy to be done after two years, I missed it.  I wasn’t sure how it would be to nurse twins, but I knew I would try.

Then, they came early.  Really, really early. A whole trimester early, so they had plenty they had to do before we could even think about breastfeeding.  They had to learn to breathe on their own, regulate their body temperatures, and gain lots of weight. They were not able to do all that PLUS learn how to breastfeed, so they were fed by tubes. 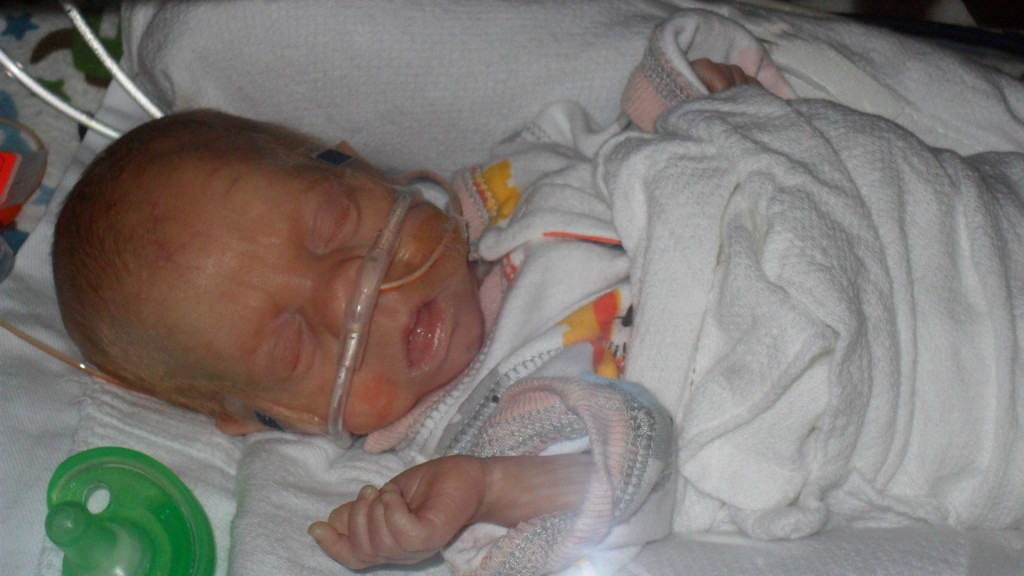 Now, as moms we are all told by doctors, other mom’s, pretty much everyone, “Breast is Best.” The nurses and doctors in the NICU where my boys lived for their first three months completely agreed with this statement.  Even before I could recover from my emergency C-section, I was given a hospital breast pump, and told to start pumping every 2 to 3 hours. You could have a 5 hour stretch overnight.  Gee. Thanks.

I had probably pumped for my oldest about a handful of time, but he never liked taking a bottle.  I knew what pumping felt like, but had no idea it was such a huge time commitment, and so much work.

But, I wanted to do what was best for my babies, and it was really the only thing I could provide them.  I couldn’t hold them, and I could hardly touch them at first.  They were supposed to be in my body, so they weren’t ready to be touched or handled. It was just too much stimulation too soon. 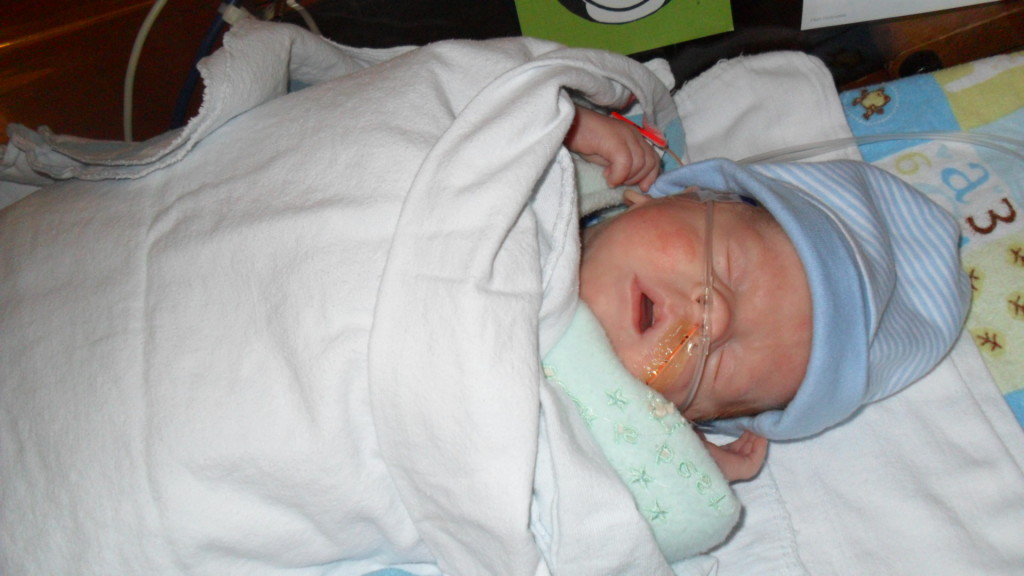 So, I sat in my hospital bed, pumping and pumping until my milk came in.  I remember being so proud of the teeny, tiny bit of colostrum that first comes out.  The nurses called it “Liquid Gold.”

It became part of my daily routine.  Get up. Pump. Eat, get dressed for the hospital, and go to the hospital with my containers full of breast milk.  Pump at the bedside.  Go home.  Eat.  Squeeze in a nap.  Pump.  Play with my then 2-year-old.  Pump.  Eat dinner. Pump.  Watch TV. Pump.  Go to bed.  Get up in the middle of the night.  And you guessed it, Pump.

My husband would joke that he hated the Pump and the noise it made more than I hated it.

That was simply not possible.

Not only was it uncomfortable to do, time-consuming, and exhausting, but it was a constant reminder that my babies were not with me.  I remember crying a lot while pumping.  And writing.  That was actually when I started to use writing as therapy (with my sports bra cut to make a hands-free pump.)

Yet, I still continued until the nurse told me they were ready to breastfeed.  I was so happy and excited!

They were still so little, though, so it was very hard to get them to latch.  I used plastic nipple shields to help, and eventually, they both started to get the hang of it. 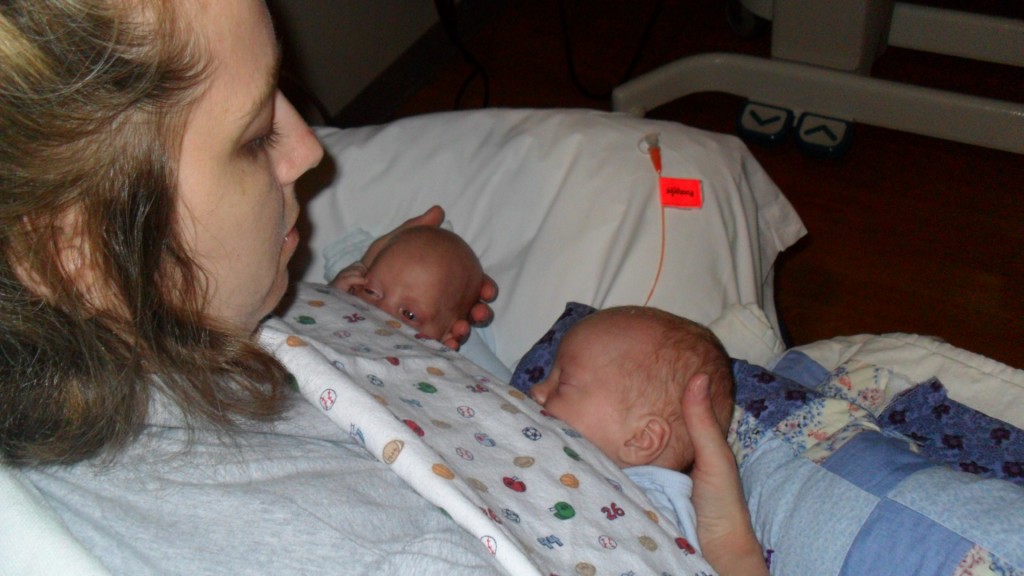 Then, all of a sudden, the babies were ready to come home.  I bought a double breastfeeding pillow, took the rest of my frozen milk supply from the hospital, (which I thought would last months and months, but in reality lasted maybe 1 month,)and was ready to toss the breast pump.

Except I couldn’t.  They still needed to gain more weight, and wanted me to fortify a couple of bottles a day with extra calorie formula.

Only, it wasn’t as easy as I thought it would be.

My little guy got Thrush.  Thrush is basically a yeast infection in your mouth, which he got from the antibiotics he was on for his eye surgery.  It is very easily transferred, so I had to be careful about my little guy passing it to my big guy and myself…which he did.  Well, he only passed it to his brother because I’m sure I mixed up a nipple shield or put them on the wrong side in my sleep deprived haze.

Two babies with Thrush meant trying to get two babies to take anti-fungal medicine.  Not fun.

Their mouths were sore, and they’d get frustrated trying to latch.  Going back and forth between bottles and the breast was confusing for them.  I would then get frustrated, and everyone would be crying.  Not the breastfeeding experience I was hoping for.

So, I got back on my full-time pumping schedule, and the babies were much happier. No more confusion, just a bottle.  Plus, they were still getting all the benefits of my breast milk.

But, it was HARD for me.

Now I had to fit in pumping with taking care of three children, two of which were basically newborns.  I was exhausted and starving all the time. Plus, I was super stressed out.

Preparing bottles is a lot of work.  Way more work for me than breastfeeding.

I had to make sure everything was sanitized…pump, parts, bottles, nipples…because I was worried about them getting sick.  I was definitely paranoid, but that’s what happens when your babies are in Intensive Care for the first three months of their lives.

Still, I kept at it.  I continued pumping for 6 months exclusively.  I then started cutting down my pumping time, but did it at least 3 to 4 times a day until I hit the year mark.

It was at that point, I felt I had done my job.  I was actually pretty proud of myself. I provided them with the nutrition and antibodies I had for a whole year.  A whole year of being hooked up to a machine.  I can still hear the noise of the machine in my head.  Ugh.

After an experience like that, I will never judge another mother again when it comes to feeding.  I felt a lot of pressure to provide breast milk, and now I really don’t think that was fair.  Especially to put that kind of pressure on a mother when her babies are in the hospital fighting for their lives.  Luckily, many hospitals now provide donor milk to preemies.

Of course every mother wants what’s best for their baby, but you have to do what’s best for you too.  You need to be able to take care of yourself in order to care for your baby. Whether you feed your baby breast milk or formula, all that’s important is that you’re feeding your baby and giving them love.