You are here: Home / Blog / Disney California Adventure Park: What to Expect

After spending time at Universal Studios, Los Angeles, and Disneyland, we were ready for our final day in California. We had one more theme park to hit: Disney California Adventure Park.

To be honest, I didn’t know much about this park. We saw a little of it when we first arrived, and I looked at the website a bit before we left, but for the most part it was going to be a surprise for all of us.

Within one day, we were able to see the entire park, and ride (almost) every ride we wanted. Since they share the property, you are also able to view the nightly fireworks.

Apart from that, the parks have some differences, and I’m going to share what exactly to expect. 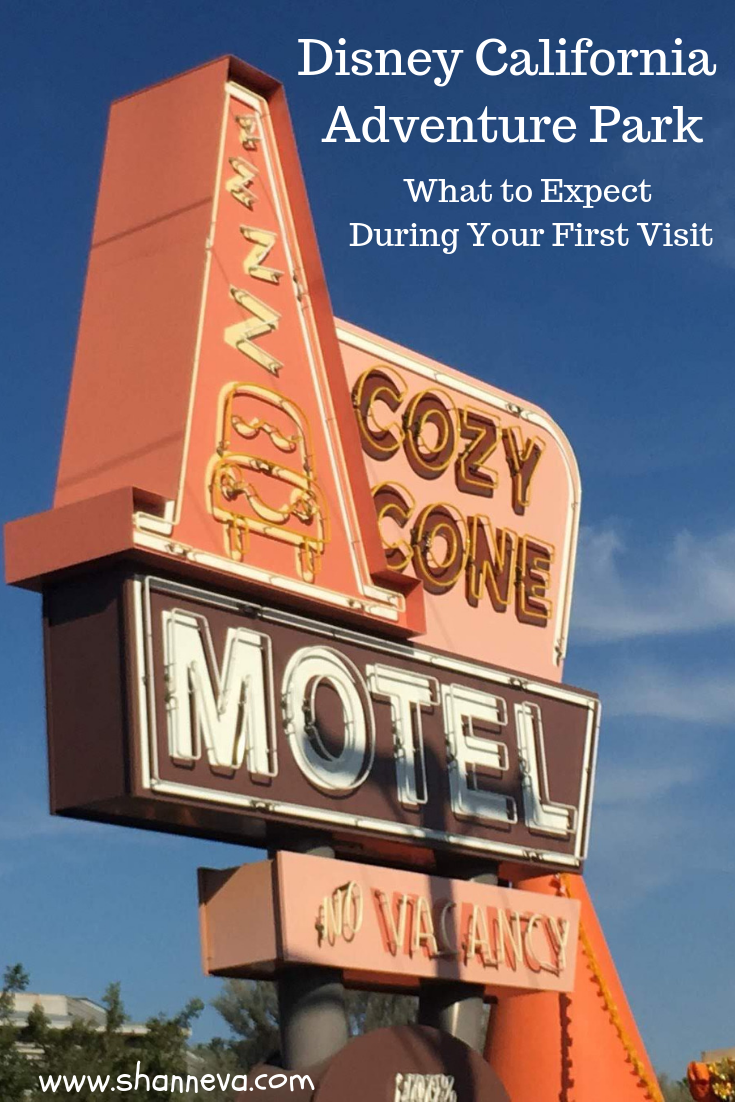 The Set-up and Characters

While Disneyland and Disney World have many classic characters and rides, the Adventure Park is filled with more recent ones. You can find characters from Cars, Monsters Inc., Toy Story, Inside Out, Frozen, and The Incredibles, just to name a few.

This was by far our favorite part of the park. It feels like you’ve just stepped into Radiator Springs! The Cozy Cone Motel has come to life, along with some fun rides for both kids and adults. We also got to take a picture with Lightning McQueen! 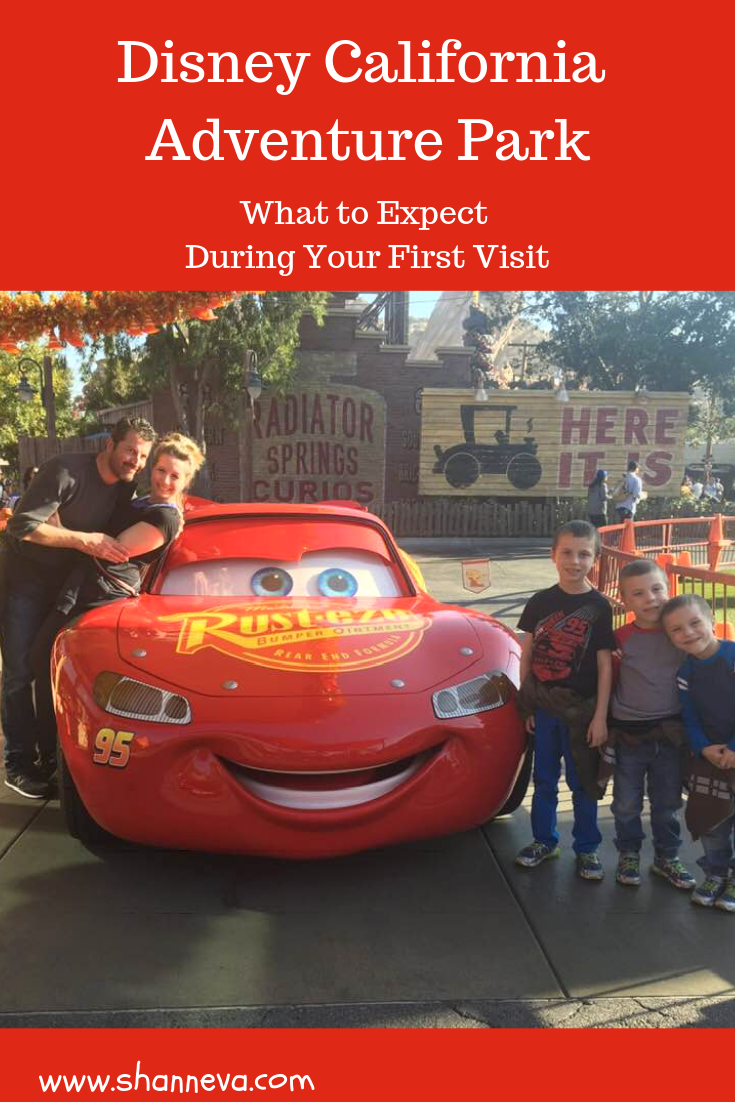 In this area, you get to experience a carnival with all the characters from your favorite Pixar movies. There is a giant ferris wheel, carnival games, and food.

Shortly after our visit, a bunch of Toy Story rides opened. Guess we’ll just have to go back!

We did get to meet Sully and saw some characters from Inside Out. 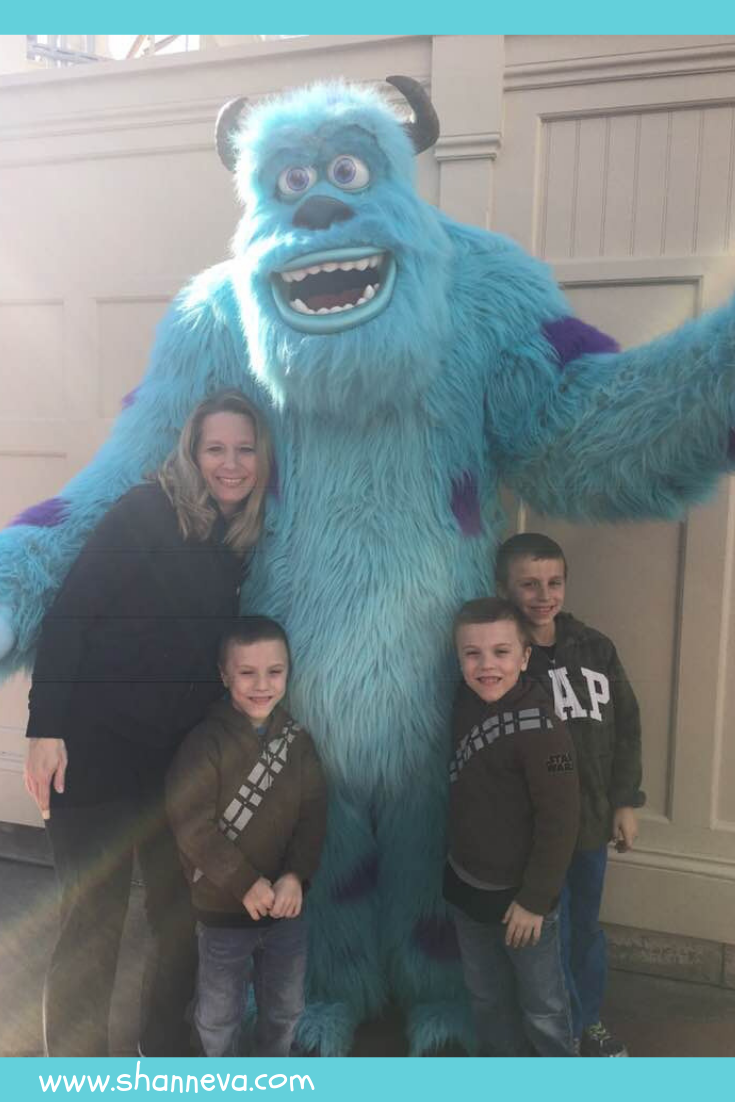 The park didn’t seem as spread out as Disneyland. You can definitely walk, but there is also trolley that you can ride to visit the different areas of the park.

There are plenty of rides for everyone in the family, but there definitely are more rides geared for older children and adults. The lines were also significantly shorter than the lines at Disneyland. We didn’t use a Fastpass all day, and we got to ride on everything we wanted to with one exception.

The Radiator Springs Racers had a huge line and Fastpasses weren’t available until late at night. Even though the boys wanted to drive the cars, I’m actually glad we didn’t ride. They wouldn’t have been able to drive the cars themselves, and I think it would have been a little too fast for them. 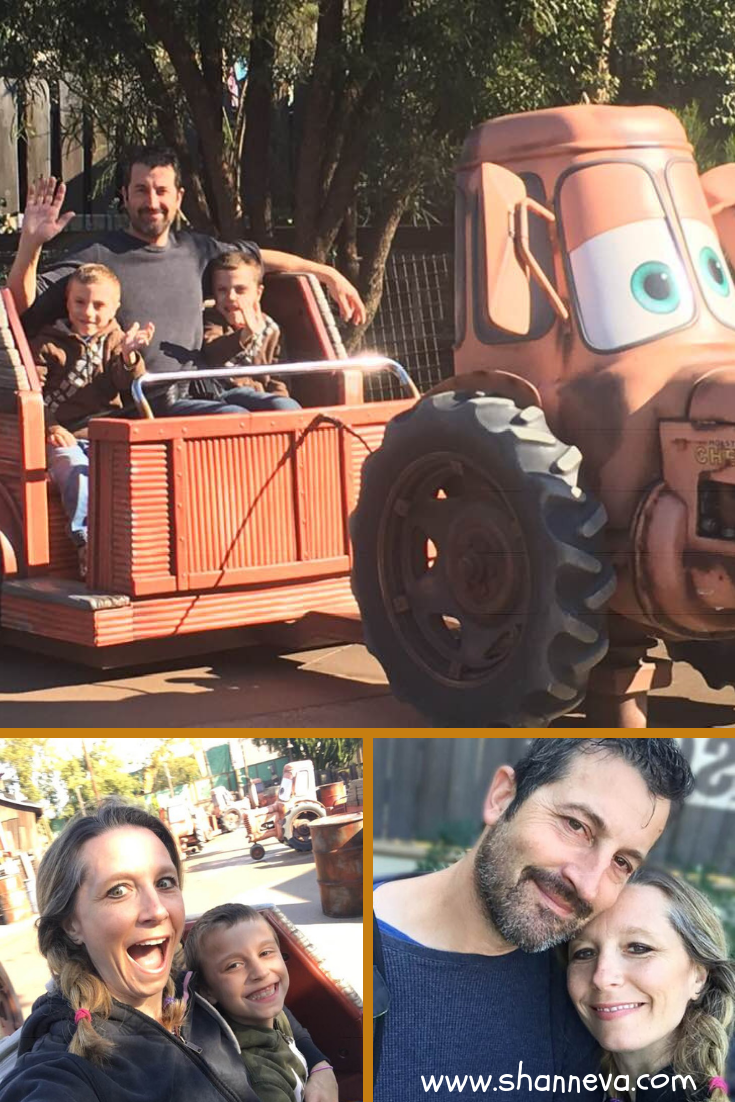 As a family, we rode Luigi’s Rollickin Roadsters,  and Mater’s Junkyard Jamboree, which were both small spinning rides in cute cars and tractors. Monsters Inc. Mike & Sully to the Rescue, and The Little Mermaid: Ariel’s Undersea Adventure were rides that we all sat together and you go through scenes of the movie.  Pixar Pal-A-Round was a giant ferris wheel. There were two options for the Ferris Wheel, one with swinging baskets and one without. Can you guess which we chose?

All the boys rode on the Grizzly River Run, which is like a giant river rafting experience. Then, Mr. B and Andy rode the Guardians of the Galaxy. If you’re wondering if those are scary, I’ll just tell you that Mr. B held onto both my husband and the stranger next to him during the Guardians ride.

Finally, Andy took the twins on the Golden Zephyr…twice! Mr. B was actually scared of this one, but it looked like a couple of big rocket ships flying around in a circle. He gets dizzy, so it was probably a good choice.

Like Disneyland, you are able to bring in your own snacks and unopened drinks. I brought a small backpack with pretzels, granola bars, and fruit snacks, just as I had the day before.

Unlike Disneyland, Disney California Adventure Park does serve alcohol. It was a happy discovery for me and my husband.

As for food, there tons of snacks and treats, and there are also sit down spots to eat meals. We ate in an outdoor restaurant called the Wine Country Trattoria. On the website, they recommend reservations, but we walked right up and found a table.

Later in the afternoon, we had some macaroons for dessert.

We definitely enjoyed our day at Disney California Adventure Park. The boys loved seeing some of their favorite characters, they enjoyed the rides, and we had some beautiful weather.

Since it was our last day, and our 4th theme park day, we were pretty tired out by the end. We didn’t make the fireworks, but we had a full day at the park.

Although it is different than Disneyland, it still had the same Disney magic.