Party food should be fun, right? Well, what is more fun than Dr. Seuss inspired party food? Nothing!

Today, I’m sharing all the fun appetizers and desserts we served at our NICUversary.

I plan our parties in the middle of the afternoon, so we just serve snacks and treats. And cake, of course. There is always cake!

At least some of the party food always matches the theme of the party. For Mr. B’s Star Wars party, for example, he had plenty of themed food. There were Fruit Light Sabors, Pizza the Hut Rolls, and Yoda punch. You can see the rest of the food HERE, if you’re planning a Star Wars party yourself.

As you know from my previous post, the Twins’ NICUversary theme was Dr. Seuss with Thing 1 and Thing 2. I focused on red and white food, like the Cat’s in the Hat’s hat. There was also blue food, like the Thing’s hair. 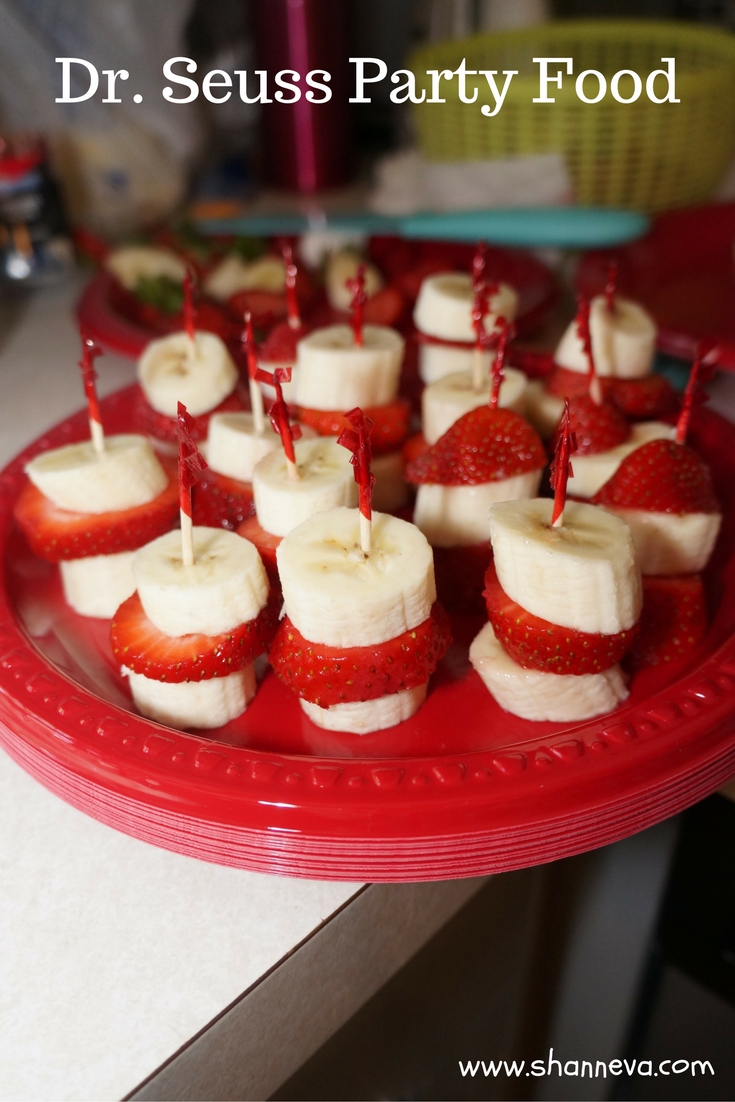 The first appetizer was fruit. I stacked bananas and strawberries to represent the Cat’s hat, and made a dip, colored blue, of course. The dip was made of whipped cream cheese and marshmallow fluff. It was colored blue with sweetened Jello.

Next, I made another stack of white and red. This time, it was fresh mozzarella and tomatoes. There were two different dipping sauces. The first was a red balsamic, and the second was a ranch dip, colored blue with food coloring.

Both appetizers used toothpicks with red or blue at the ends. 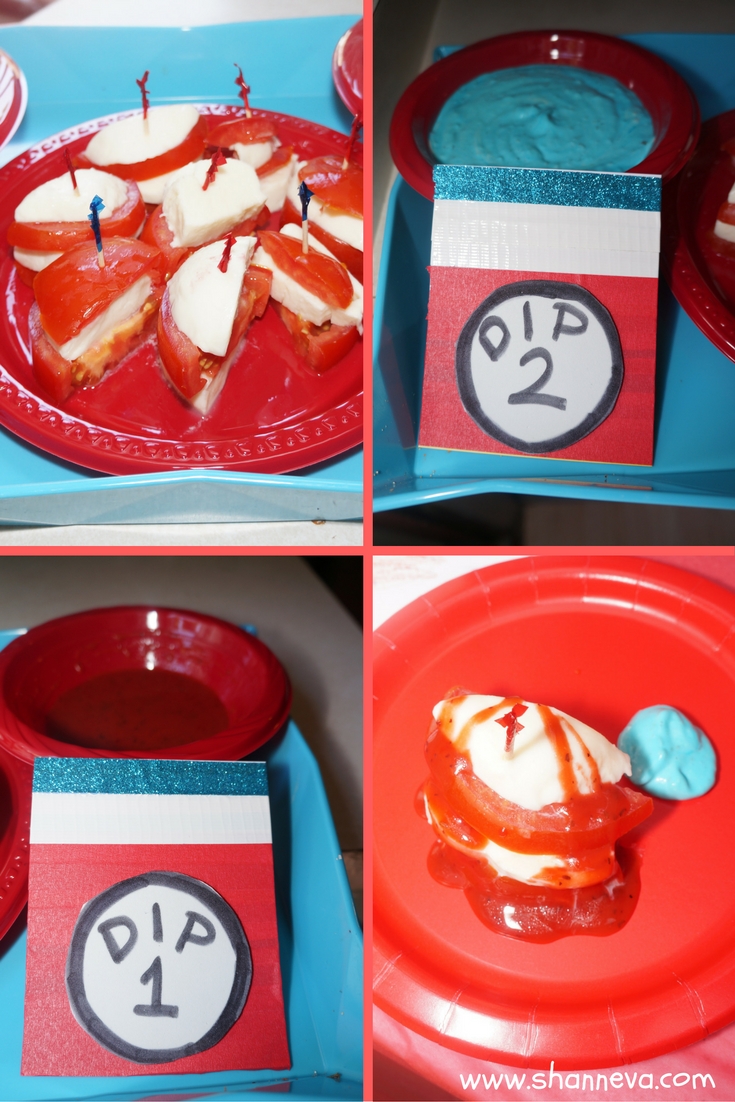 We had Cats in a Blanket (mini hot dogs in crescent rolls,) a cheese and sausage platter, white tortilla chips and red salsa, and carrots with Red pepper hummus. Too bad there aren’t white carrots!

I was going to serve meatballs with BBQ sauce, but somehow forgot all about them. Darn mommy brain.

Punch is always fun to have for a party. My boys don’t like fizzy (or as they say “spicy”) drinks, so I had Hawaiian Punch and a red fruit juice. Mix in a little water, and you’re set.

For the adults, instead of mixing up a punch, I just had some red soda and red wine. There was water for everyone.

The drinks were served in red cups. If you’re really ambitious, you can put white tape stripes around the cups, and they look just like the Cat’s hat!

For it to be a party, you must have cake. Grandma was nice enough to volunteer to bake not one, but two cakes, for my own Thing 1 and 2. They were blue and white on the inside, with red icing. 4 red and 4 white candles topped each cake for their 4th birthday. Each cake also had a candle with the boys’ initial on it. 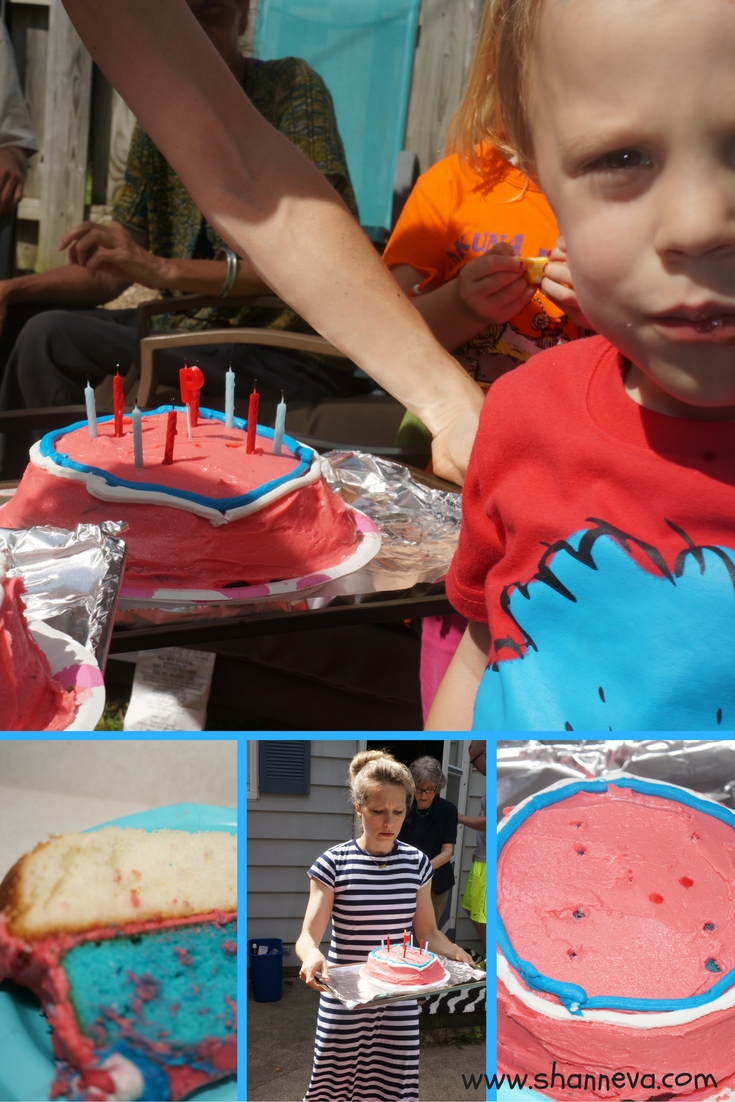 The flames kept flickering, as I brought the cake out, which is why I have such a look of determination on my face. They would not blow out before getting to the boys!

I served all the food on red and blue plates. I also used plastic red cups, and red/white silverware. This eliminated the need for expensive pre-made themed party-ware. I used the red and white plastic bowls we already owned, and put stripes of the opposite colors on them.

Dips were labeled with “Dip 1” or “Sauce 2” sticking with our theme. If I’d had more time, it’d be really fun to come up with some crazy names for food just like Dr. Seuss comes up with in his books.  Just another idea for your next Dr. Seuss themed party!

Included below are my Amazon Affiliate links for some of the products I used. Remember, there is no additional cost to you, and you will be supporting my blog by clicking through and making a purchase.

Instead of birthday hats, you can use these adorable paper Cat in the Hat hats! How fun is that!

Stay tuned for more about our NICUversary decorations  later this week.