You are here: Home / Blog / Fertility on Micro Preemie Monday

Many people struggle through fertility issues, but it’s not talked about enough. It is truly an emotional and physical battle that is often faced in silence.

There can be so much heartbreak along the way, but it is a journey that most people wouldn’t hesitate to do again for their sweet baby. Much like the NICU journey, there are so many unknown complications and outcomes in a fertility journey.

Today, we meet a couple that not only struggled with fertility, but also experienced a premature birth. Their story truly shows strength and hope for those going through both.

I’m so happy to introduce you to Israel Jr., as told by his mom, Kristin.

My husband and I tried for almost five years to have a baby. We started fertility treatment, and after a few failed rounds of IUI, we did IVF. The doctor called and said you are pregnant, but my levels were low and I needed to take medications to help preserve the pregnancy.
At the first ultrasound, my doctor said hmmm… Baby was growing on track but his sack wasn’t. At 14 weeks, I was told by specialist that everything was normal! I was finally able to enjoy my pregnancy!!
At 18 weeks, my water broke for reasons still unknown. I went back to the specialist who had nothing positive to say. He encouraged me to terminate the pregnancy and warned me that the baby had less than 10% survival. If he did survive, he would have no quality of life.
Thankfully, my OB didn’t agree and sent me to the best place possible.
After the first week, I barely had a centimeter of measurable fluid in 2 out of 4 quadrants. I went on bedrest until 24 weeks, when they would admit me. Again, the doctors there told me how grim the chances were and how long the road would be, but that they were willing to fight for him.

On May Day, at 27 weeks and 2 days, Israel Jr protested his living conditions, and he was born by emergency c-section, weighing 828 grams and 13 inches long.
The nicu ride has been exactly what I was warned it would be. He is so amazing and strong.

He has some muscle tone issues from the IUGR, he has a cleft palate, and horseshoe kidneys, with one functioning.
They discovered a large VSD and PDA. He had his first bypass surgery before his due date at just 1.8 kilos.
Unfortunately, it left him with permanent complete heart block. St. Jude had a discontinued model that was small enough for him. I took another blow when they discovered he wasn’t getting better, and that he had something else going on in his heart. 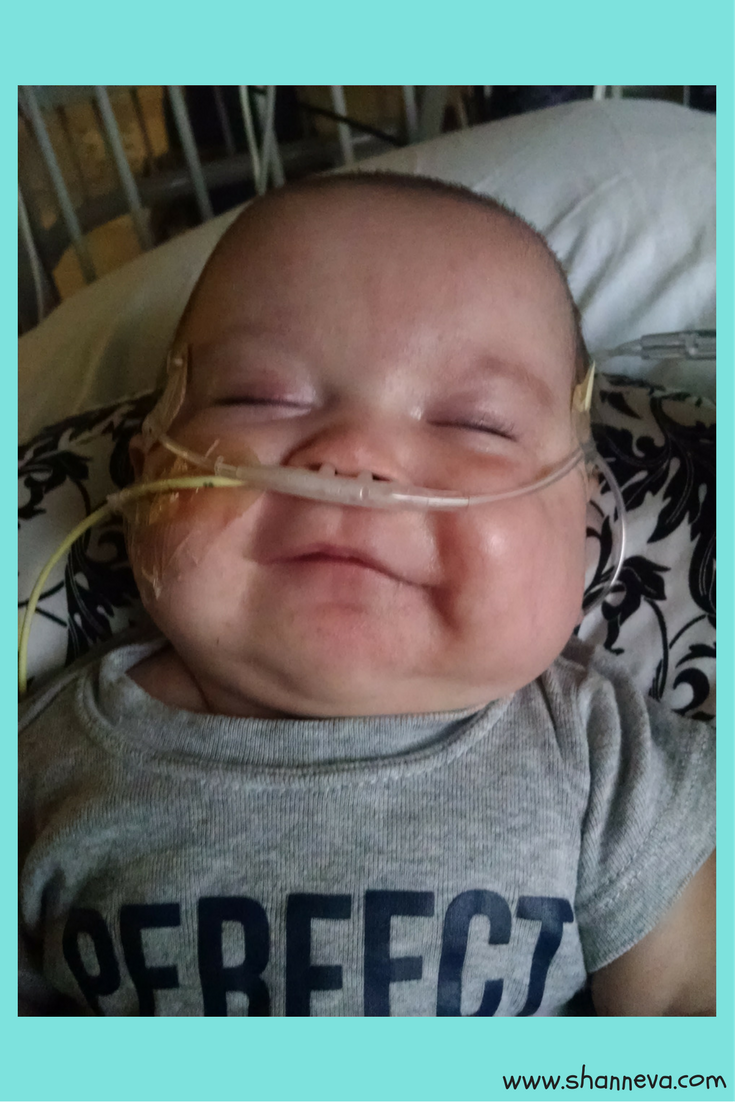 They did a second bypass surgery where they found another good-sized hole hiding in the back of his heart. He has BPD (Bronchopulmonary dysplasia,)  CLD (Chronic Lung Disease,) and pulmonary hypertension.

We are still in the NICU at Seattle Children’s Hospital. It’s been 200 and something days.  He just turned 7 months old and is the happiest, most beautiful baby I have ever seen.

We were transferred here at 6 weeks because they thought his hernias were incarcerated and causing an obstruction.  Right now, he is trying to recover from hernia and g-tube surgery, and has now got his first cold.
The drive to the hospital is 100 miles, and I am constantly driving back and forth.
I also have an 11-year-old and 3 dogs at home to take care of. I do it mostly on my own. My husband works so much, and I have no physical support from anyone other than minimal help from my disabled mother who helps as best as she can.

My advice for couples would be to make sure you and your partner agree on limits of how far in treatments you want to go. For example, if you want to do insemination versus IVF, and be supportive to each other. It was a defeating feeling for my husband to think something was wrong with him and just to need the help. He was supportive, but apparently he didn’t agree with some of the things we had done. He wondered and questioned if we were being punished somehow because we went to the lengths we did to get pregnant.
My advice for moms would be to speak your mind, no matter how crazy you sound. If you are wondering or don’t agree with something, say something! Be the biggest pain in the butt you have to be! It has helped me so much by being so involved and learning as much as I can about everything.

Thank you so much to Kristin and her husband for sharing sweet Israel, Jr. with us. You are all such fighters, and I look forward to updates in the future.

Please leave any questions or supportive comments below.