We did it! We made it through a week of kindergarten (and by “we” I mean mostly me!) 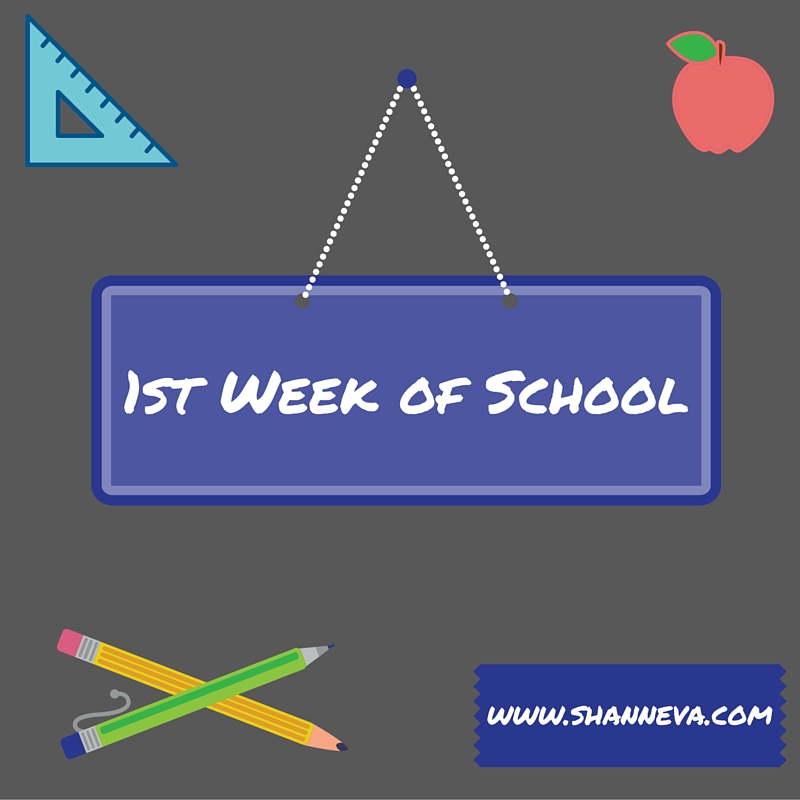 After seeing his classroom, meeting his teacher, and getting pictures taken on Monday afternoon, we tried to get our boy in bed early, so he’s be well rested for his big first day.

He was way too excited.

He finally fell asleep, but was up super early. And by super early, I mean 5 am. My husband, coincidentally, also fell asleep early, so was up around the same time. Lucky me that didn’t have to get up!

I had gotten his clothes ready, backpack and lunch packed, so we were good to go in the morning. My mom came over for the big send off too.

We actually were ready about 20 minutes before the bus even came, so we headed outside to wait…and of course, take a few pictures. 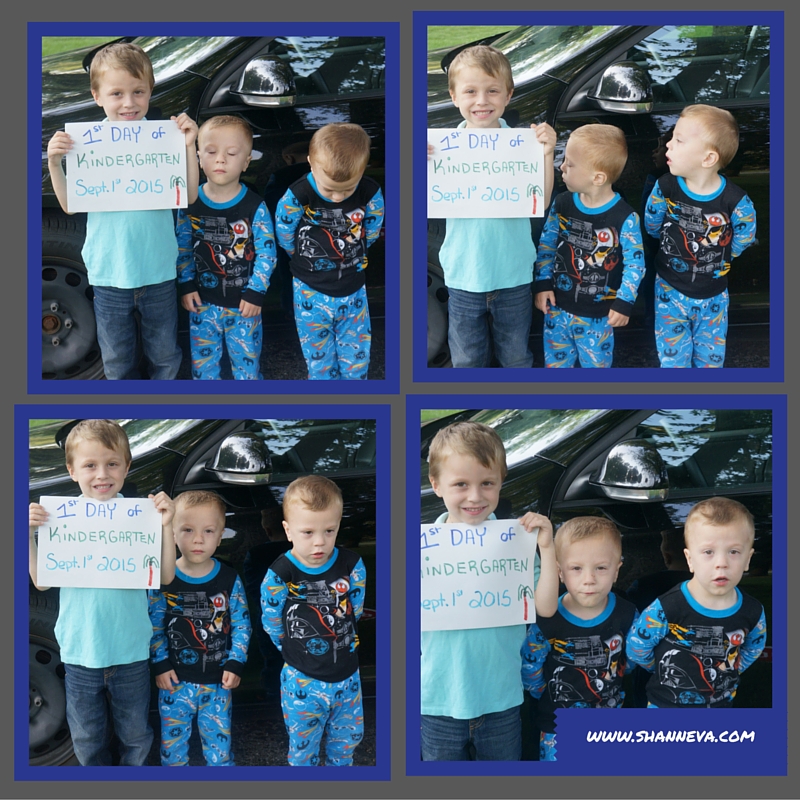 Yes, these are the best ones I could get even with my Mom and husband yelling their names over my shoulder to look and smile. Yes, the twins are in their pajamas. At least they have shoes on!

Overall, my baby seemed pretty excited, and as soon as the bus came, he grabbed his backpack, let me take one last picture and got on.

This is what happened next. 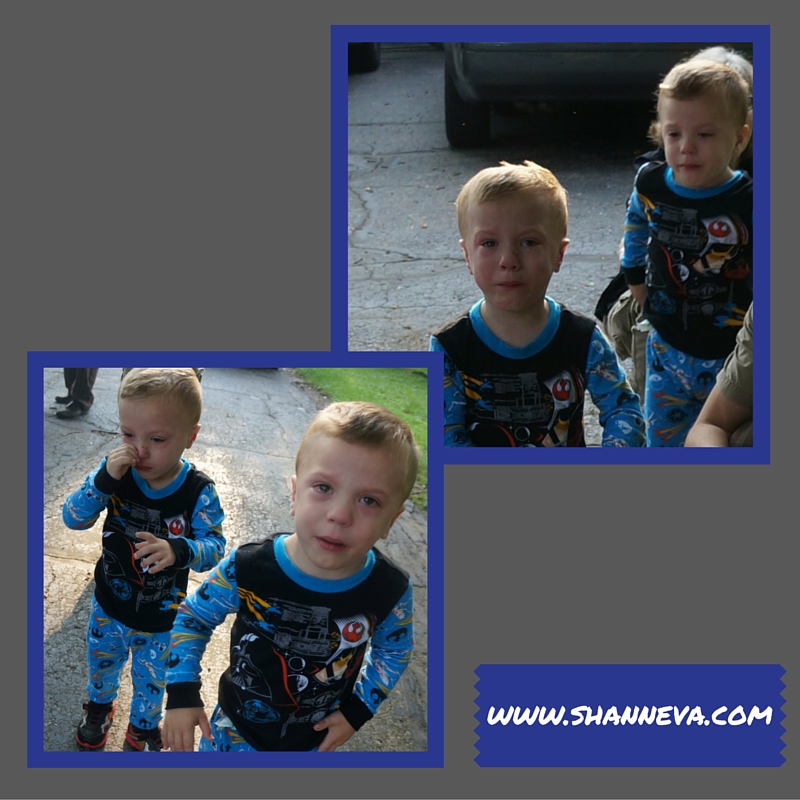 Awe. They are sad because big brother is leaving for school. So sweet.

My Mom thought they were crying because they thought I was getting on the bus.

They wanted to get on the bus. It could have been going anywhere. They just wanted to ride the big yellow bus. Poor guys. They still have 2 more years to go.

So, in order to stop the crying (and so I didn’t start crying,) we all piled in the car (except for my husband who went to work, and didn’t know we were going to do this,) and went to my son’s school. The twins were excited to see more buses, and I got to make sure my baby arrived safely without him knowing it. Don’t worry. We just parked in the lot a safe distance away, and watch for his bus. We didn’t get out or anything.

As you know from my other post, I took the twins and joined a gym, so that occupied much of the rest of the day until nap time…which of course, they didn’t want anything to do with after having so much fun at the gym child care.

Then it was time to go outside and wait for big brother to get home and tell us about his first day.

Then, my parent’s called to see if he was home yet..NO!..so they came over to wait too. I was just starting to get worried, when he arrived!  I was so excited to see him, and from his big smile he was excited to see all us waiting too. 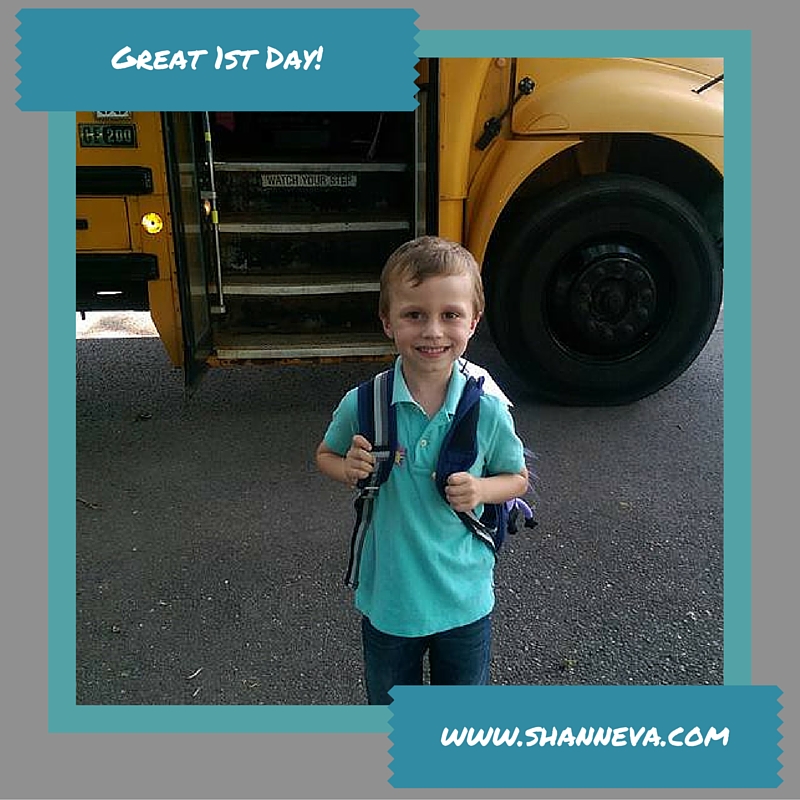 Turns out, the buses all left the school late because they were making sure everyone was on the right bus.  At least I got a phone call. Although, it was after he was home.

So after tons of hugs and kisses, I tried to get the scoop on the first day. I knew it would be hard, as it was like pulling teeth to get him to tell me about what he did in preschool. What I did learn:

He said he had fun, but I could tell he was overwhelmed and really tired. He wanted to watch one of his favorite shows, and gulped down the rest of his water bottle, two glasses of milk, and finally used the bathroom.

It was no trouble getting him to sleep early.

Day 2, I made sure to remind him to go to the bathroom at least once during the day, to have the teacher help him buy milk at lunch, and to at least drink his water throughout the day.  He wasn’t quite as excited and seemed a little teary. He kept saying he was going to miss me. It made my heart hurt, but I just kept smiling telling him how much fun he would have. Luckily, our neighbor was on the bus, so at least he had a friend to sit with.

Again, he came home and was tired. He just kept saying that he missed me, and that he loved me. I snuggled him for a long time, and tried to pry more information out of him, but got nothing. Except, he did go to the bathroom and get milk for lunch! Hooray!

Day 3 was pretty much the same. I waved to him as he was riding off in the bus, and I noticed he had to turn away. I think he was trying to stop himself from crying. Ugh. They do get out early on Thursdays, and I could tell he was having fun as he got off the bus cause he was laughing and waved to some kids. 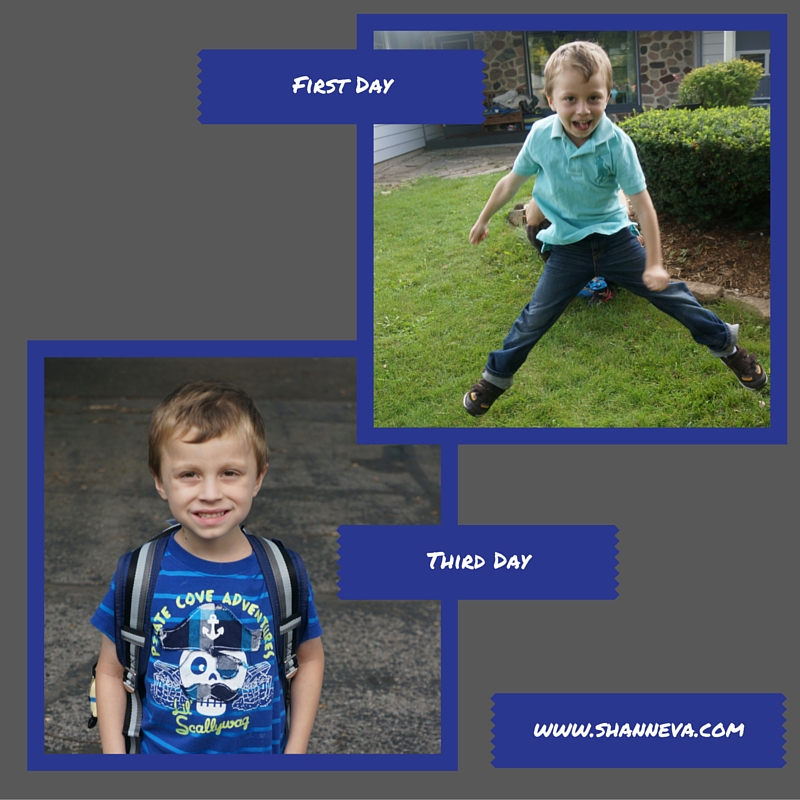 I know it will keep getting easier for both of us. It’s just going to take some time to get used to the schedule because it’s just such a long day. He was only in preschool for about 3 hours, 3 days a week. Now, he leaves at 8:15 and doesn’t get home until 4 pm.

While, it’s nice that I can now go to the gym with the twins, and not worry about occupying my oldest while the twins nap, I really miss him so much. I think it will be easier for me when I can see that he’s making new friends and really having fun.

It’s all just an adjustment, and we’ll get the hang of it soon. I’m looking forward to the long weekend with my baby (and celebrating my birthday!)

How have your little ones been doing with going back to school? Are they having fun? Are they missing home too?