All mother’s experience guilt at one time or another, but a premature mother’s guilt can be overwhelming. Not only is there guilt about “normal” parenting decisions (like the guilt from choosing one feeding method over another, for example,) but there is guilt about the actual prematurity. Not being able to carry a baby to full-term can really play with your emotions.

A mother may feel like her body failed her and her baby. Everything that happens after that early birth can just magnify those feelings.

Even though I knew it wasn’t my fault that my twin pregnancy was complicated, I still felt all the responsibility for those two lives inside me. I carried the weight of every decision on my shoulders, and when it came time to deliver, I, alone, had to give the doctor permission to save my babies.

Watching my boys struggle in the NICU was very tough too. Why couldn’t my body take care of them longer? Why did they have to fight so hard just to live? Was there something else I could have done to keep them from being born so early and from suffering so much?

In my head, I know there was nothing I could have done to change the outcome, but sometimes my heart didn’t get the message. Sometimes, no matter what reassurances we’re given, that guilt takes over logical reasoning.

I’m so honored to bring you their story because it really will help others understand another struggle that comes with a premature birth. 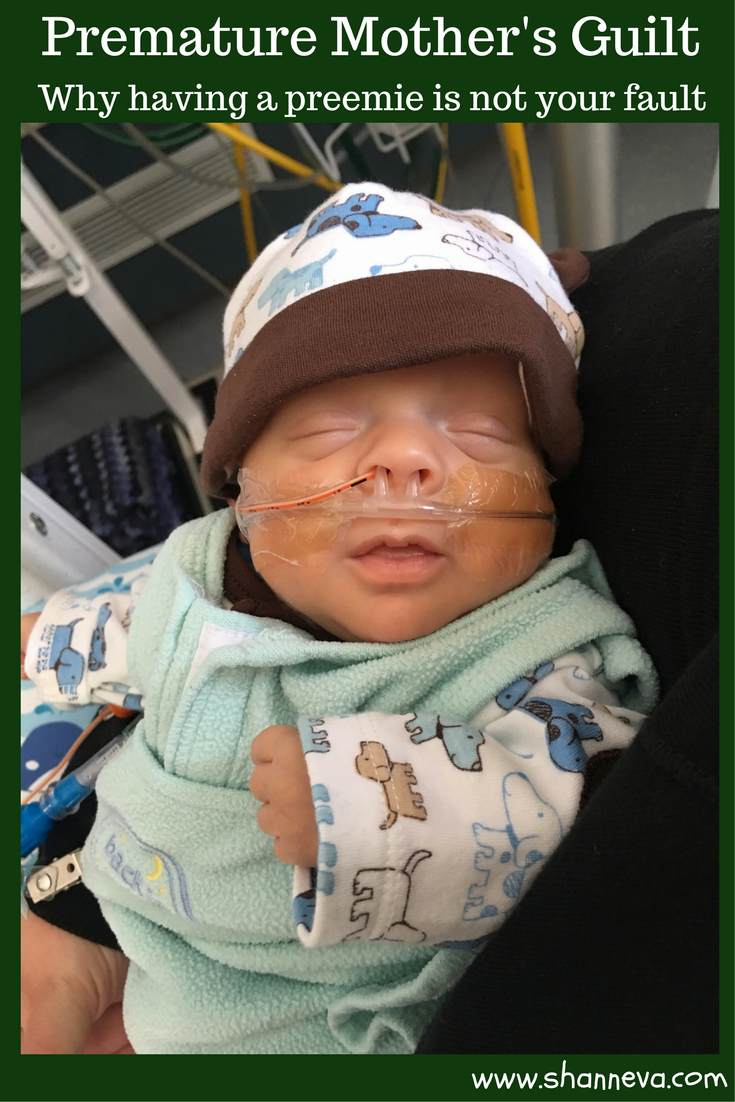 My son, Merrick, was born on January 13, 2017 at 4:56 am weighing in at 1 lb 13 ounces and 14 inches long. It was both Friday the 13th and a full moon, but we decided to change the superstition and make it a lucky day, because even though he came early, we felt lucky we got to keep him. 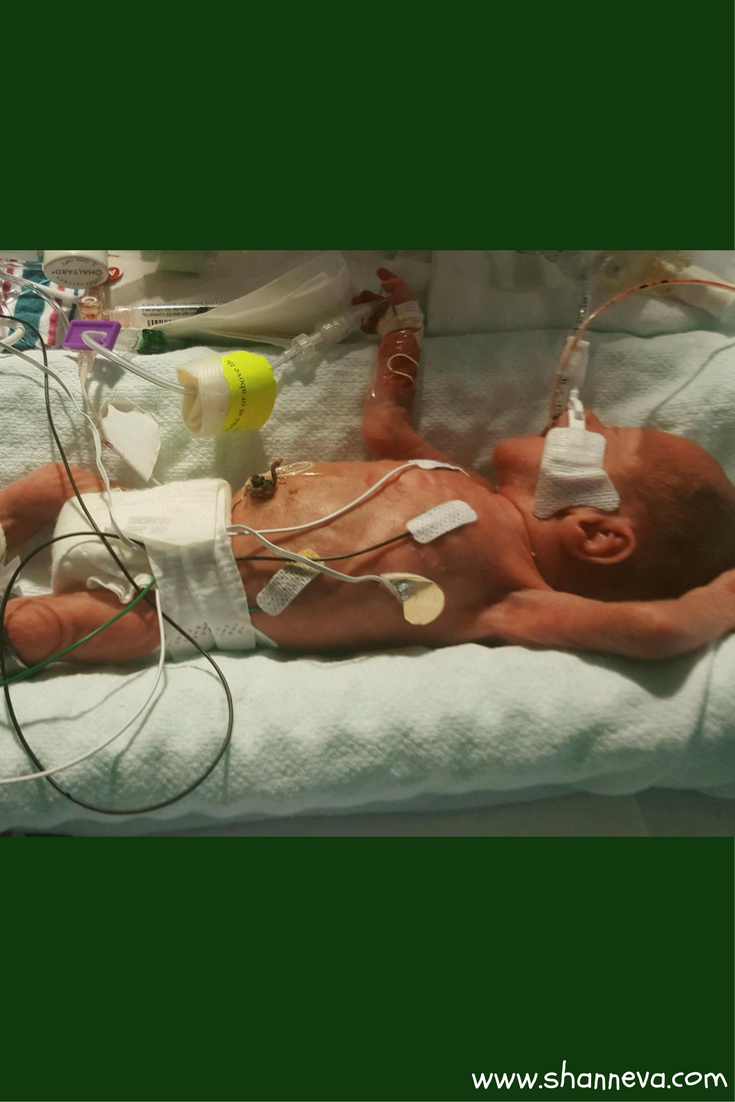 He is now almost 7 months old actual and just over 3 months corrected. He weighs 11 lb 7 ounces and is just shy of 22 inches long.

My pregnancy had no complications other than that I had terrible morning sickness and threw up constantly, up until the day I delivered.
My water broke at exactly 23 weeks. I hadn’t  been feeling well the night before and barely slept all night,  but I chalked it up to round ligament pain. When I got up to get ready for work, I realized I had lost my mucous plug, and while  I was brushing my teeth, my water broke.
We rushed to our local hospital. I wasn’t dilating or having contractions, but unfortunately where we live there is no NICU or high risk maternity floor. I was transported by ambulance 2.5 hours away.
After 2.5 weeks on hospital bed rest, I started having contractions. After 41 hours of labor, our little man arrived. The doctors said PPROM is rare, and they don’t know the exact cause as to why it happens. A lot of times it is related to some type of infection, such as a UTI, but every test they did came back negative.
We will never know why this happened. 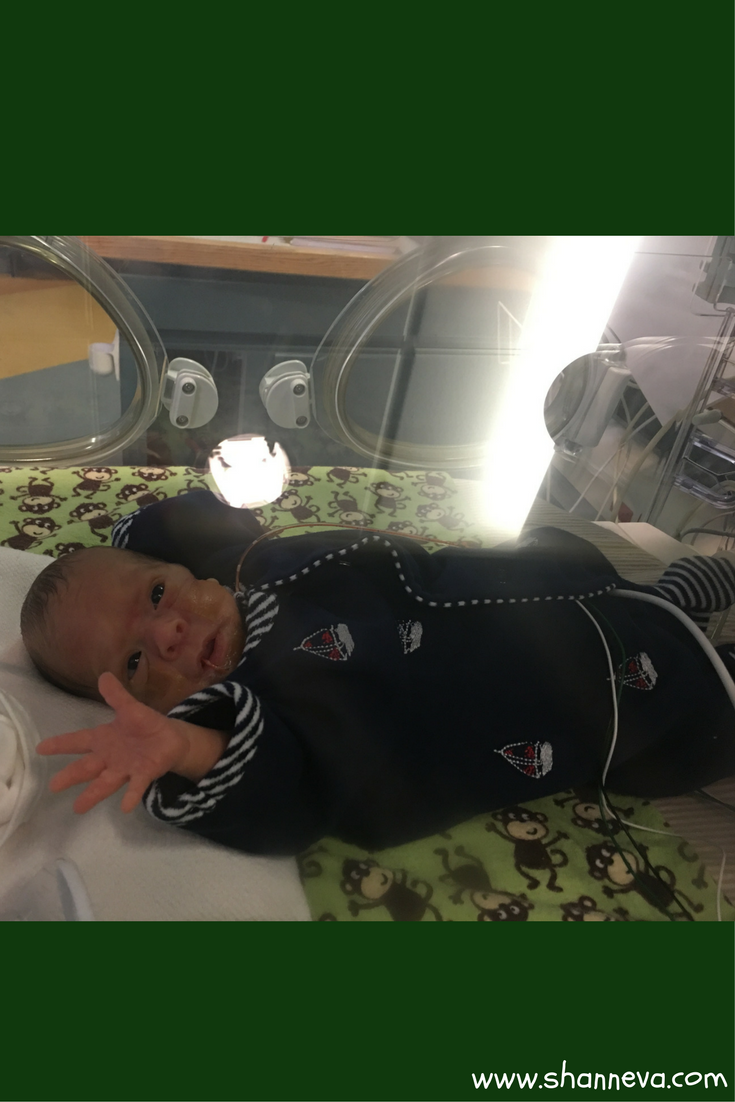 Merrick was in the NICU for 92 days and came home 10 days before his due date, which was the day before Easter! 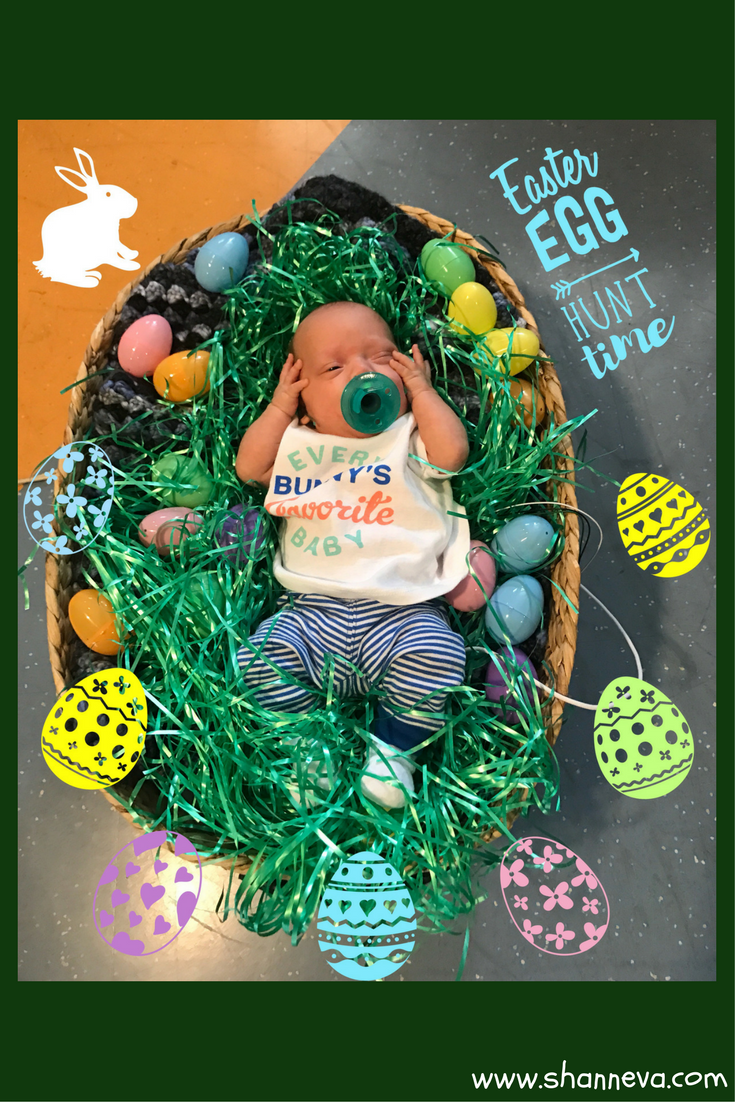 There were so many parts of being in the NICU that were challenging, it’s hard to choose just one.
When Merrick was born, he was the smallest and sickest baby in there, and it stayed that way for a long time. Watching your baby suffer and fight to survive …. there are just no words. I’m a RN that works in critical care, but I work with adults. I wasn’t used to having to depend on someone else to take care of my family. Everything about it went against who I was. I wasn’t used to being so helpless.
The worst memories I have are when he was accidentally extubated multiple times, and I sat and watched them bag my 2 lb baby. When it was all said and done, he would have tears in his eyes, and it would rip my heart into a million pieces.

Merrick is doing very well overall. He has severe reflux which still causes some issues and a cow’s milk protein allergy, so he is on a special amino acid based formula we have to get through a medical company. I had such a hard time feeding him when he first came home because of the reflux, I ended up having little time to pump, so my supply dropped. When we found out about his allergies, this meant I could no longer use frozen breast milk because I had eaten dairy. I have an entire deep freezer full of liquid gold waiting to be used!!!! Children usually grow out of this allergy, and the GI doctor told us this week that soon we should be able to reintroduce him to my frozen milk to see how he tolerates it.
He is developmentally on track, rolls over both ways, and is close to sitting up on his own. 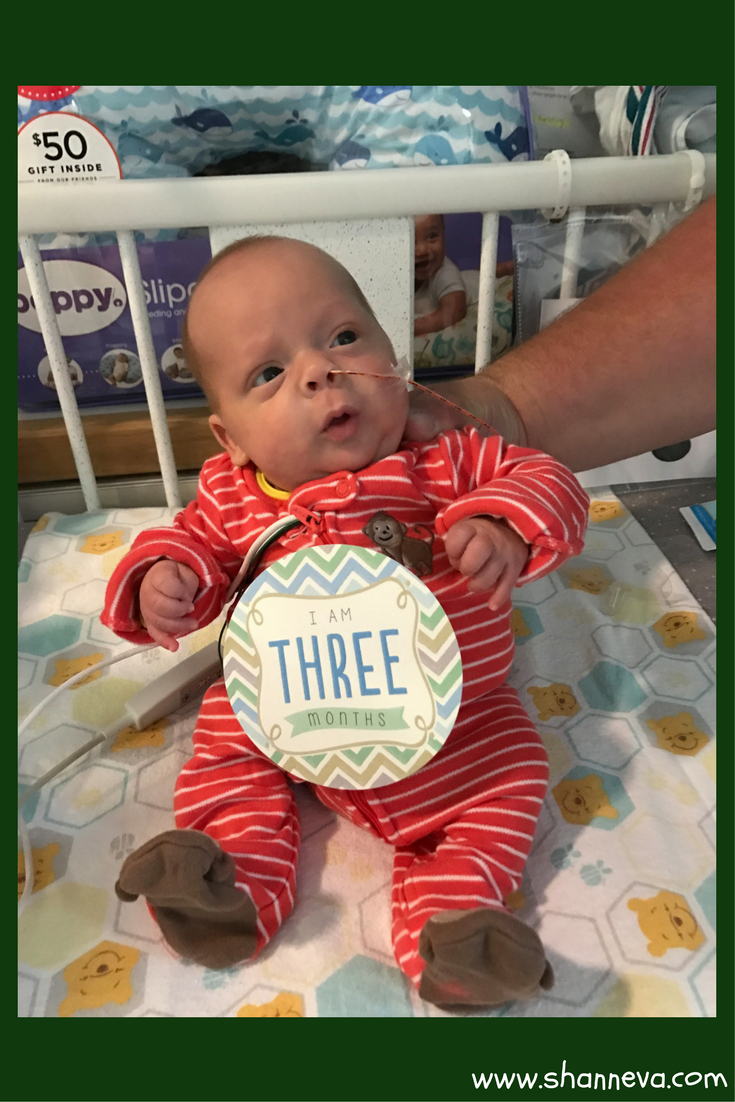 I think for me, personally, I struggle just as much as I did in the NICU, but in a different way. Every time he has an issue, like when he projectile vomits which makes him cry, I feel guilty. The doctors, my husband, family, and friends have told me so many times there was nothing I did wrong to cause him to be born early. But when an issue arises, I think to myself that if I could have kept him in longer, it wouldn’t be a problem.
When he was in the NICU, I didn’t want to leave him 2.5 hours away by himself, so I had asked my employer could I stay out longer than 6 weeks so I could be with him. Instead they let me go. The good part about this was that I no longer had to decide what to do with work. The choice was made for me. I never left Merrick’s side except to sleep, and now I am a stay at home mom. It’s been an amazing but difficult adjustment at times. 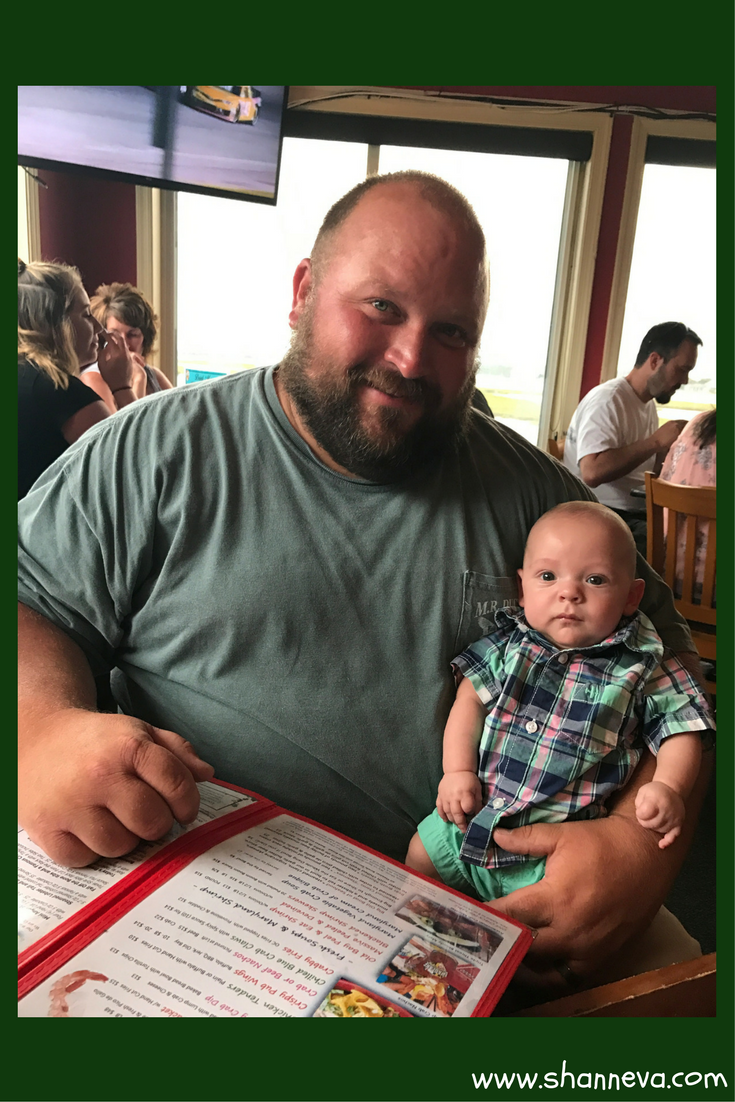 The best advice I can give to new preemie parents is to learn everything you can about your child and ALWAYS stand up for and advocate for them. There is no one on this earth that knows your child better than you do, whether you come from a healthcare background or not. Never be afraid to speak up or question things, because your baby cannot speak for themselves. You have to be their voice. 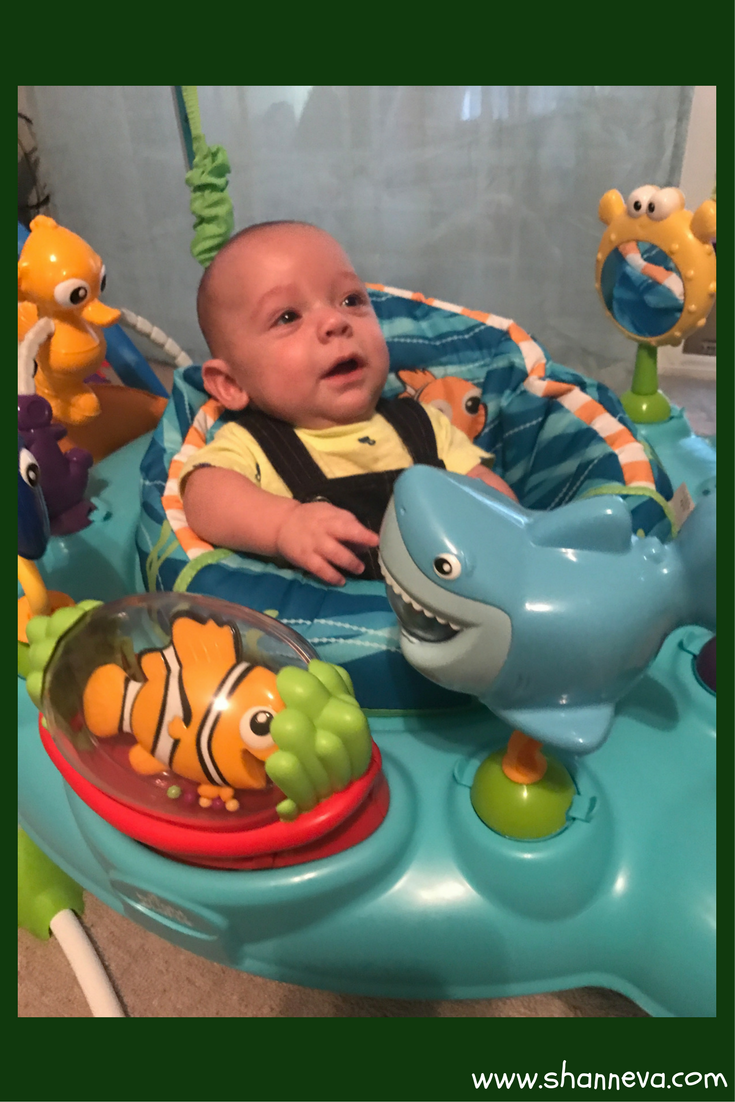 Such great advice from Kristie. I’m also so grateful for her honesty about her feelings because so many other moms will be able to relate to that premature mother’s guilt. I know I definitely could relate.
Please leave a supportive comment or question for Kristie and Merrick below.