You are here: Home / road trips / Review of A Day Out with Thomas

I still have to share the rest of our Road trip with you!  I can’t believe it’s been over a week since we got back.  So, let me tell you about our hotel stay in Green Bay, WI, and of course, a review of  “A Day Out with Thomas.” 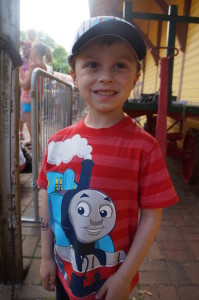 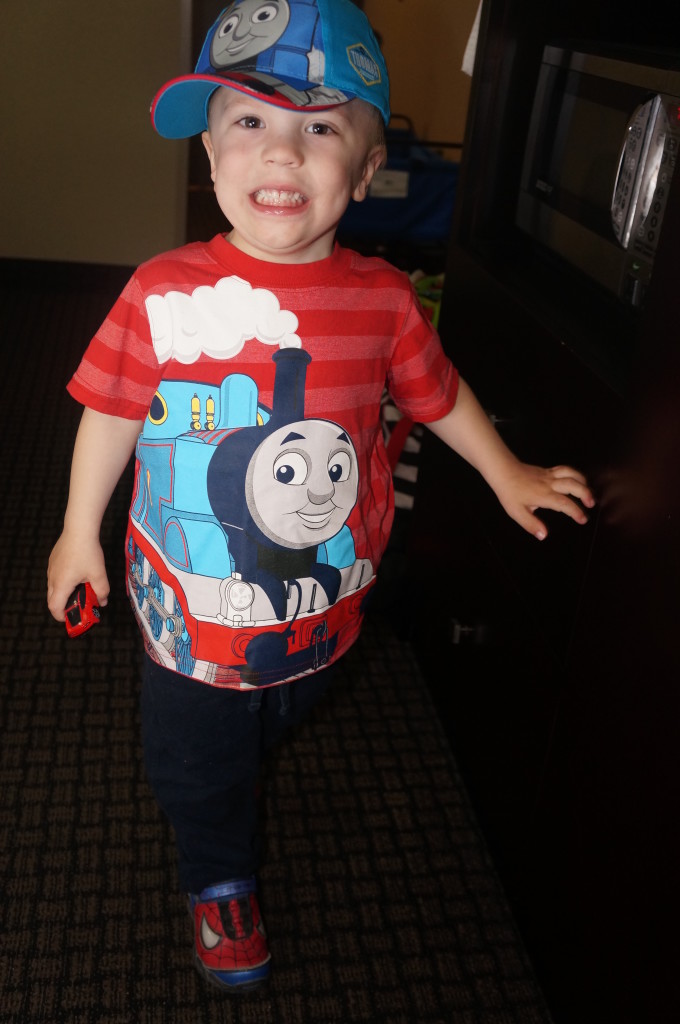 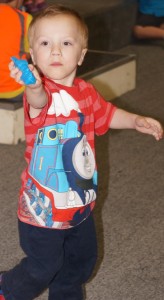 After our fun at Bay Beach, we headed back to the hotel.  I got a great deal on Priceline at the Ramada Inn.  For $55, we got a nice, clean room with a view of the pool and a continental breakfast. The pool also had 2 water slides!  According to their website, the slides are only open on the weekend, but to the kid’s delight, they opened them when we were there on Thursday afternoon.  The Ramada is also conveniently located in Green Bay near tons of restaurants and shopping.  Lucky for me, since I had to run to Target for swim diapers.

We were hoping no naps and a late afternoon of the pool would tire everyone out, but everyone managed to stick it out until well after their usual bed time of 7 pm.  I was worried we wouldn’t get up early enough to make it on time to Thomas, but I was wrong.  Everyone was up nice and early.  The hotel was nice enough to give us a late check out time, so we could come back and pack up later.

I purchased our tickets for “A Day Out with Thomas” well ahead of time, however, seating was still limited.  When you buy tickets, you need to choose both a time, and the type of Train you want to ride in.  The Train closest to Thomas was sold out, so I chose the 9:15 am Train that was a single-level.  There is also a double-level car, and an open air car.

The tickets for the event advised you to arrive an hour prior to Train boarding time.  I didn’t really understand why, until we went to find parking.

At our Event, which took place at the Green Bay Railroad Museum, you parked in a lot, then took a bus to the Event area.  My kids were thrilled!  An actual School Bus! Seriously, they loved it.  Plus, it made it super easy because there was plenty of free parking.  We also brought our wagon, which folds up nicely and fit in the bus perfectly. 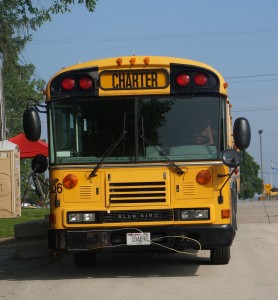 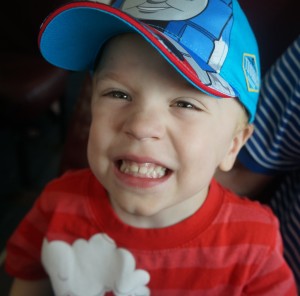 Once we arrived at the Event, there was a TON of stuff for the kids to do.  First, we stopped for souvenir conductor hats and key chains, then got some cute pictures in Thomas/Percy cutouts. 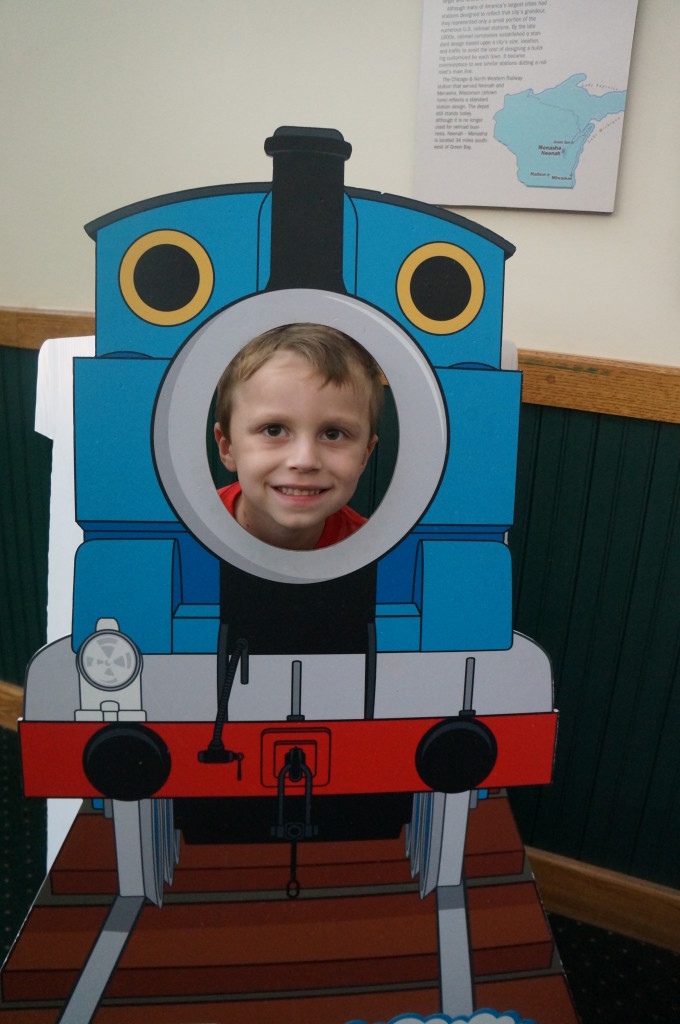 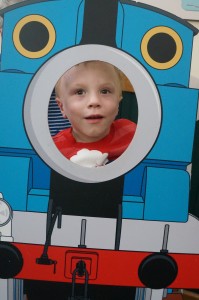 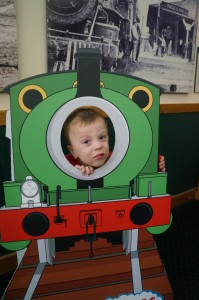 We still had some time before we boarded, so we headed to meet Sir Topham Hat.  Only my oldest was brave enough to actually meet him.  He was a little scary for the twins. 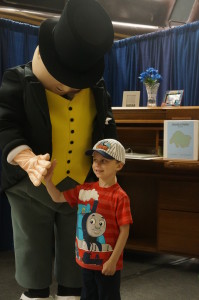 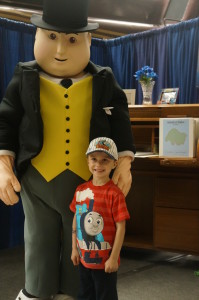 Next, we headed to where they had a bunch of train tables set up for play, a motorized train set going to watch, a few people applying temporary tattoos, and a few crafts to make. The boys weren’t really into the crafts, but they all loved the tattoos, and the train tables were one of their favorite parts of the day.  What was not a favorite?  Leaving all the trains at the table.  One of the twins tried to pile them all in the wagon when we had to leave.  He was NOT happy when I put them back. 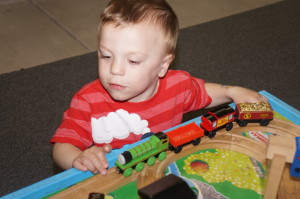 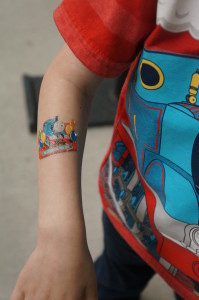 Before a major meltdown occurred, we headed out to board our train.  As I mentioned earlier, we were in the single-level car.  Since we were the first train of the day and the windows were open, it wasn’t too warm.  I would imagine as the day went on, it would get pretty hot, so I would suggest the open air car if you’re going in the afternoon. 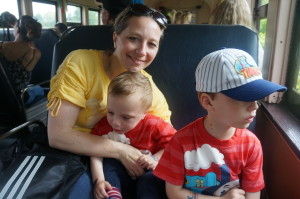 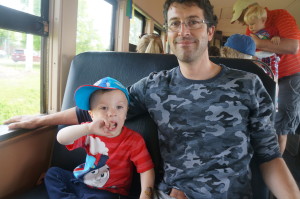 While on the train, they play the famous Thomas music, and the conductor makes periodic announcements.  You do two loops around for about a half hour ride.  Also, the train conductors come to punch your ticket, then give you a souvenir certificate. 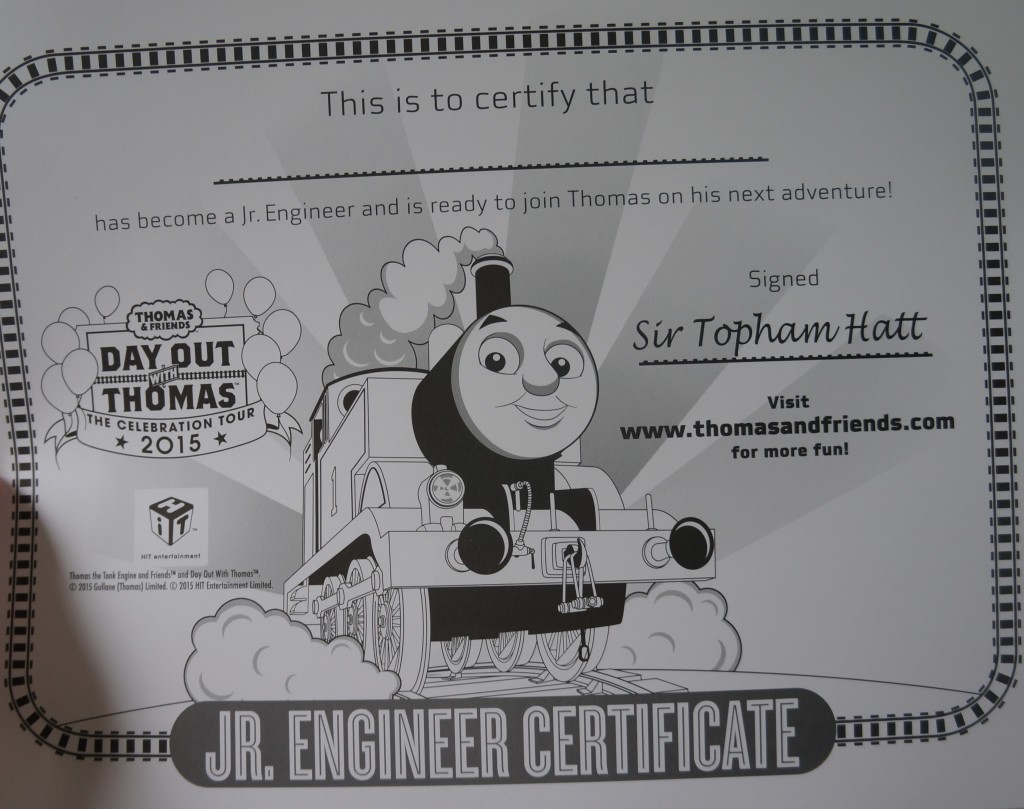 Speaking of souvenirs, they were all really expensive.  I opted to get a flag, which was $4.99, to hang in my son’s room, then I went shopping in the railroad museum gift shop.  I was able to score museum shirts for 1/2 price from their last graffiti exhibit.  I thought they were pretty cool, and you can’t beat half price! 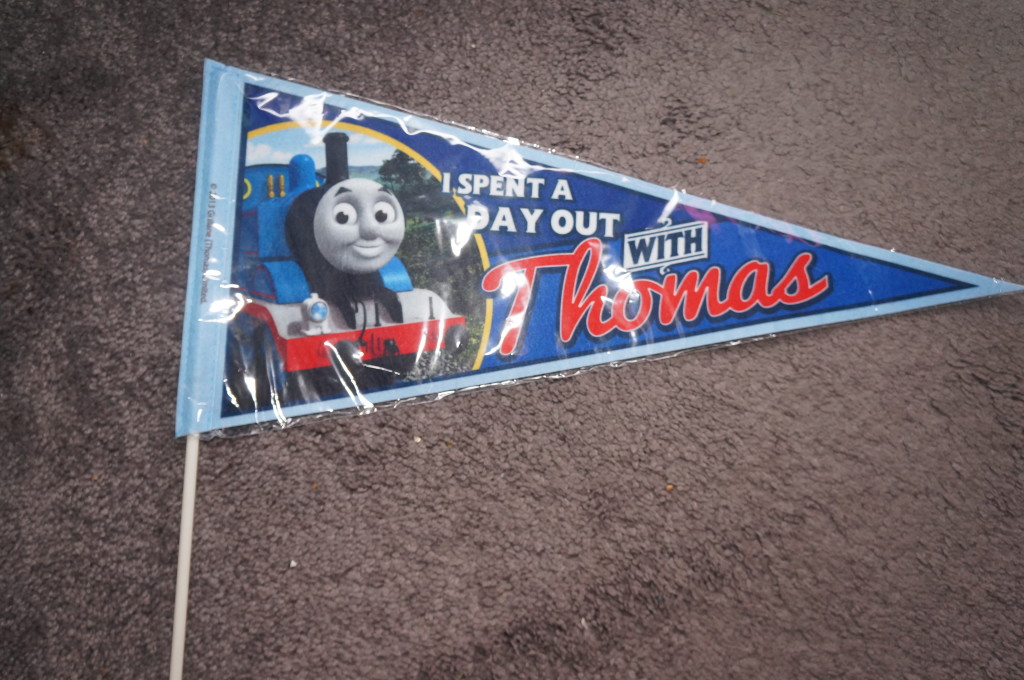 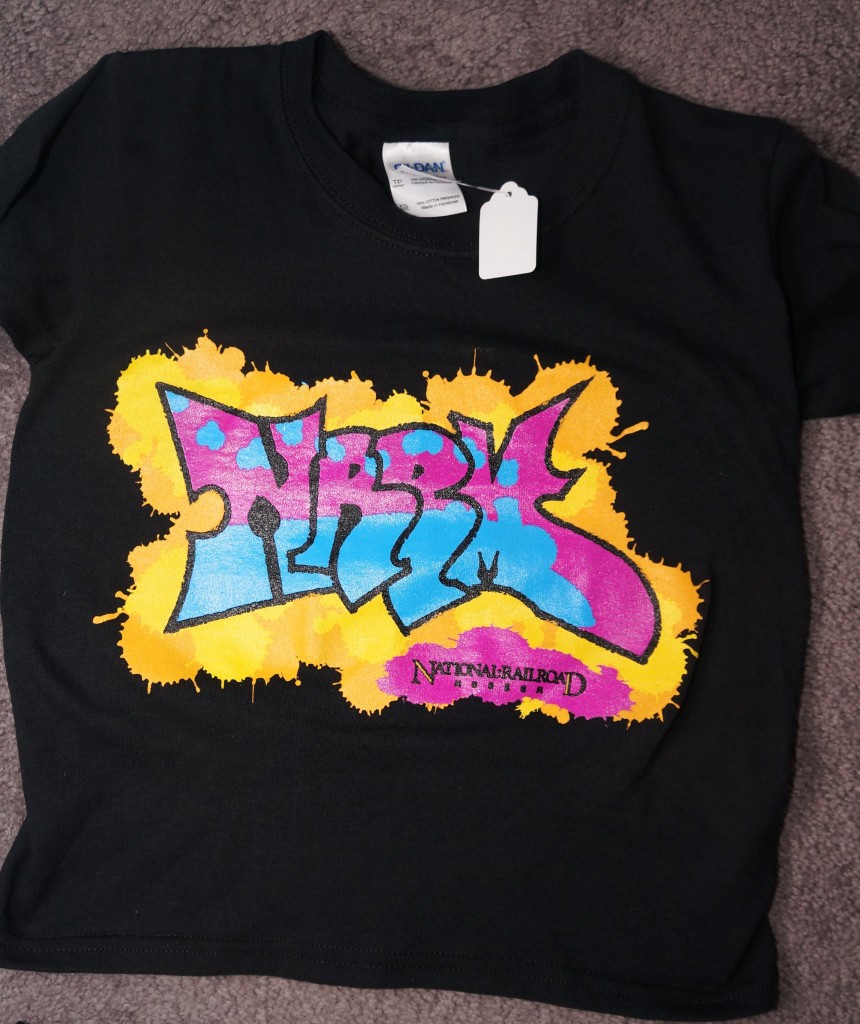 After the train ride, the kids got to get their picture in front of the Thomas train.  It was pretty hard to get them all to look, since they were so busy looking at Thomas, as you can see. 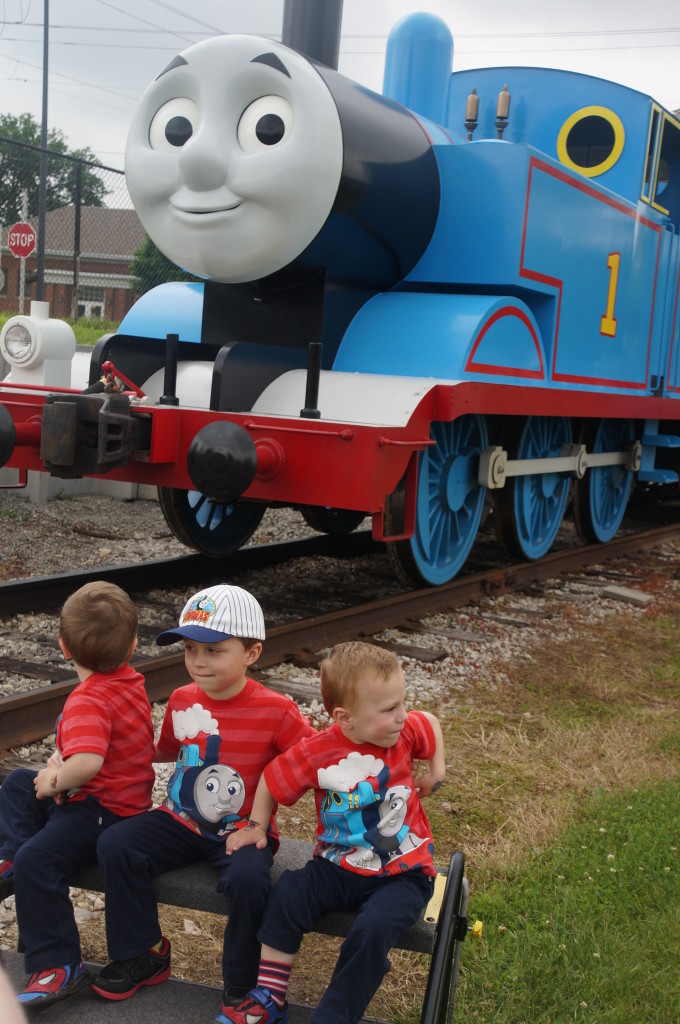 We then got a little snack, and went back in for more play time.  The twins were happy to go back to the train table, and they had a singer/entertainer that my oldest really enjoyed.  He got a train whistle and got to go on stage and perform too. 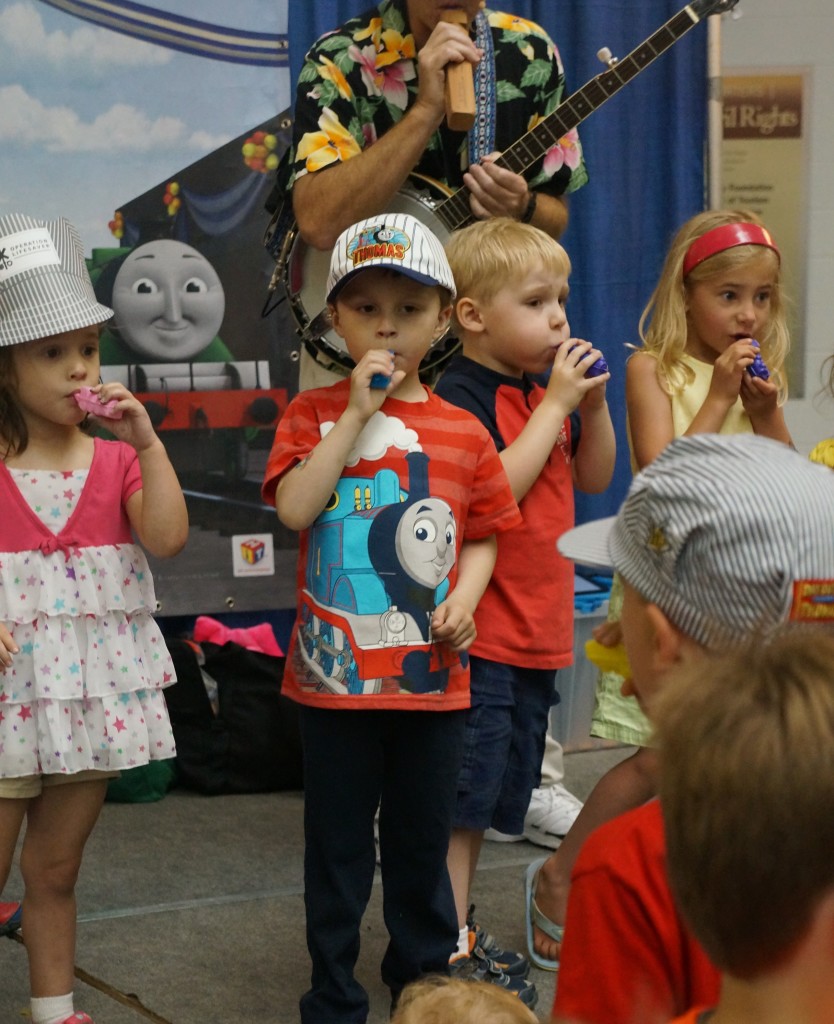 After that finished, we were ready to head out. The kids were happy to get one more bus ride!

Overall, we had a great day at “A Day Out with Thomas.” The tickets are a little pricey, but they are worth it if you have big Thomas the Train fans in your house.  I highly recommend getting one of the earlier train tickets because in addition to being cooler in the train, we were able to participate in all the activities without hardly any lines or waiting.