During any pregnancy, you will go through many tests. In fact, a test to determine pregnancy is how most journeys begin.

Factors like age, family history, and health can increase risks in pregnancy and cause even more tests. When I got pregnant for the second time, I was older, 34. Plus having multiples, I was considered high-risk and it was recommended that I do genetic screening at 12 weeks.

The results we got were not what we wanted to hear, and it was the beginning of a very intense and complicated pregnancy. Today’s mother had a similar experience when she had a test early in her pregnancy.

Their story is one of incredible hope and also a testament to how tests can be wrong.

I’m so happy to introduce you to Elise, as told by her mom, Tessa. 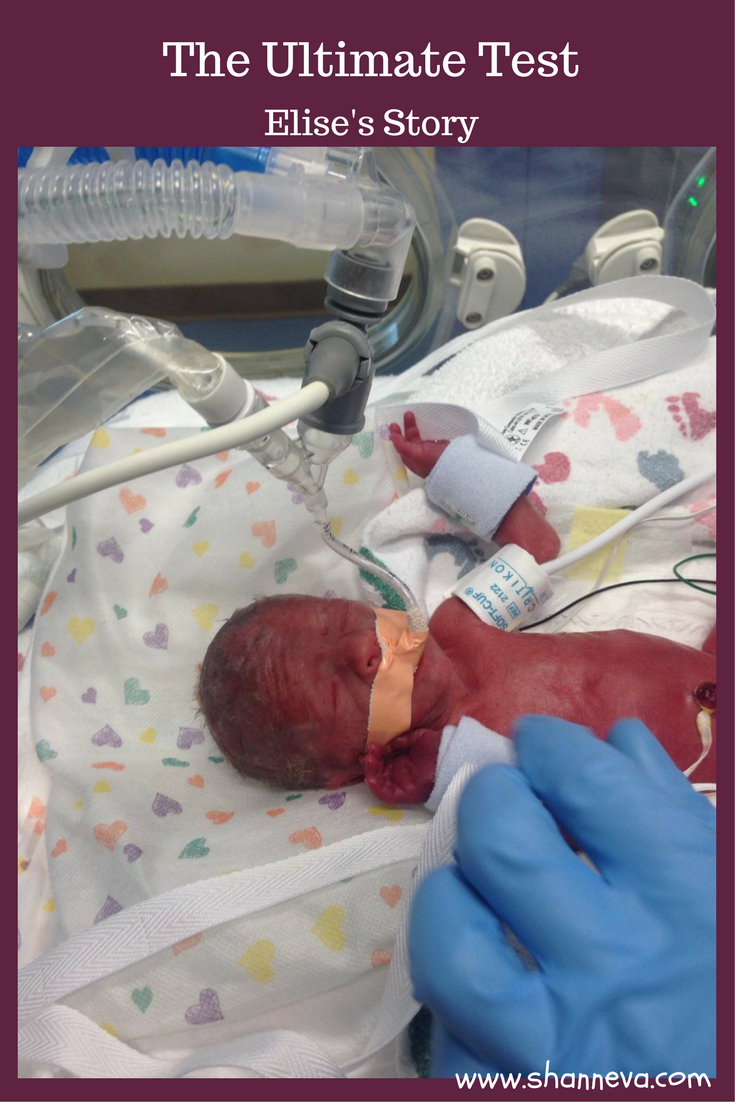 My pregnancy was stressful beyond belief. I had tried for 5 years to have children. I had a miscarriage June 10 of 2015, and I was ready to give up. Then, on Christmas Eve I found out I was pregnant. I was on progesterone to maintain the pregnancy. I made the decision to have a cell free DNA test because of my age (34, 35 when I was to deliver.)
At 13 weeks pregnant, I received a call from my OB that my test had come back positive for Trisomy 13. This was absolutely devastating news. I was told there was a 1 in 10000 chance the test was wrong. I sat on my couch for a week. Couldn’t function.
For those of you who are not familiar, Trisomy 13 is “incompatible with life” and most children don’t make it to term, and then die shortly after birth. They have significant deformities and brain impairment.
I began appointments to a high risk OB in Denver. Ultrasounds were done at 13, 17, and 23 weeks. No abnormalities were present, and I declined amniocentesis because of my miscarriage risk.
Then 1 week and 6 days later, on May 21, 2016  I was flown to Denver with a BP of 195/115. They kept me pregnant 4 days, during which I developed pulmonary edema and HELLP syndrome. 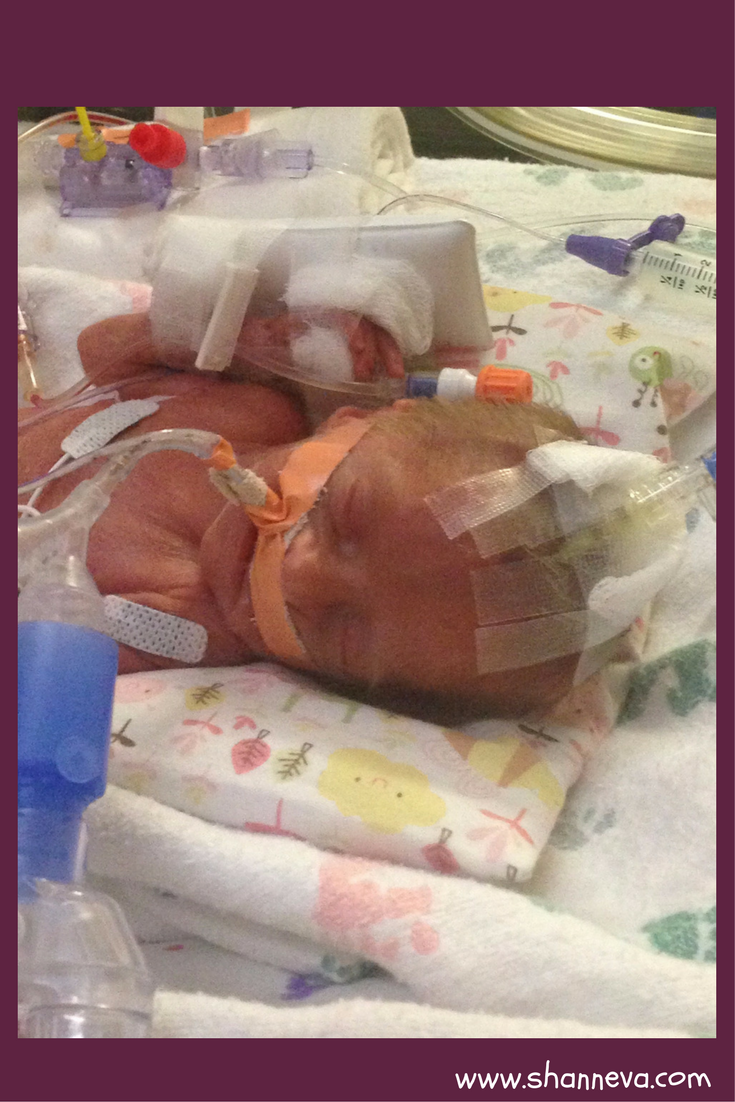 On May 26, 2016 at 740 am, our world came crashing down. The team of doctors, along with the surgeon, rushed in and said, “We can’t wait any longer. I need you to sign this consent to permit us to do a cesarean in order to save your life.” There were no happy faces, no excitement, no joy. I was in a life threatening situation, there was no choice. Save me and maybe save my little girl, or we both die.
Wheeling me into surgery, I remember breaking down, a fear more intense than I had ever experienced. The fear was not for me, it was for Elise. All I wanted was a healthy baby, to keep her safe. My body was betraying me. I was awake the entire time. It was terrifying. There were so many people in the OR. People kept telling me to relax because my BP was so high that they were concerned about strokes, seizures, cerebral hemorrhage.
Relaxing was never going to happen, though.

I remember the surgeon being casual at first, then everyone started working faster. At 9:05 am, she was born.
I waited for a cry, something to tell me Elise was alive. That she would be ok. I thought I heard a small cry, but there was no laying the baby on me. I couldn’t see her and waited as they rushed to get bleeding stopped.
With my severe preeclampsia that had progressed to HELLP, there were some issues happening with me, while the NICU team worked on Elise. There were no congratulatory comments, no excitement. They were focused on saving our lives.
Finally, they brought her around so I could see her for a moment. She was in a plastic bag. She was the smallest baby I had ever seen. At 25 weeks, she had a primitive form of alveoli in the lungs. They were severely underdeveloped, and her brain was smooth and underdeveloped. There were no ridges on her brain yet. This allowed her to feel pain more intensely than you or I. She was a fetus and came into this world 15 weeks early. 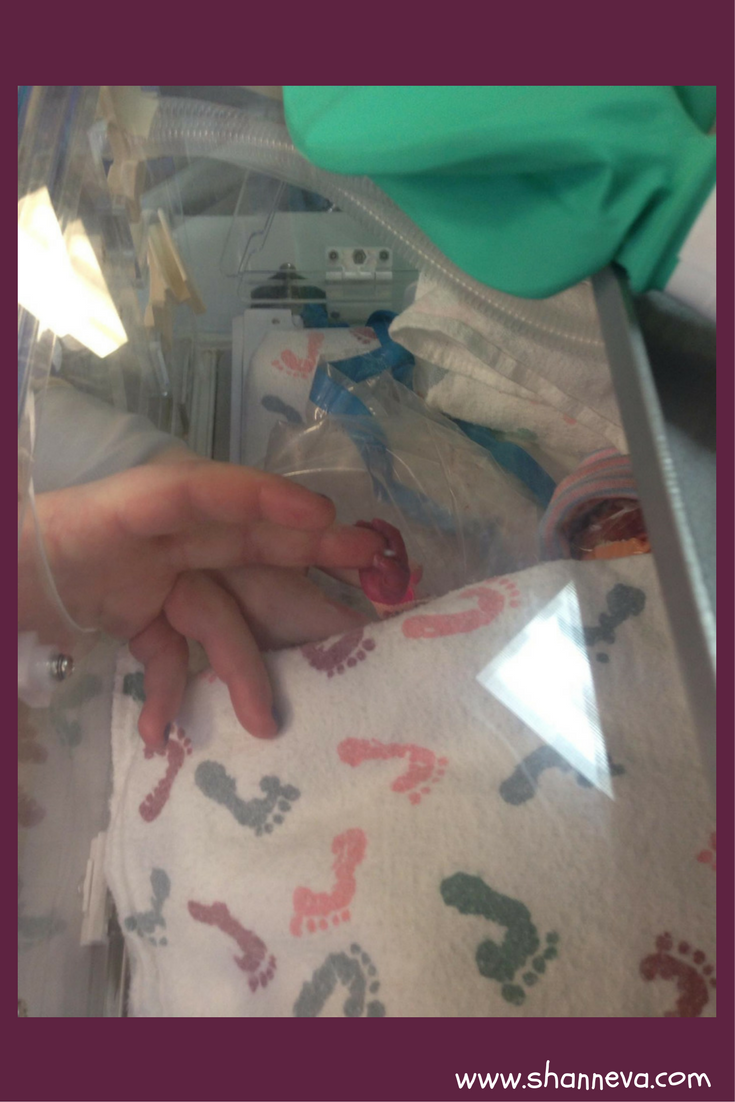 I didn’t get to see her for 24 hours, and when I did my thoughts were “this is mine?”
I didn’t even know a baby that tiny could survive. She was so small, weak, and red. They took her away, Dustin went with her to the NICU.

My NICU was 95 days with her, following ten days of my hospital stay.
The hardest part was everything. The uncertainty, fear, each day a blur, living 4 hours from home and husband.
She fought with every breath to survive. She had a grade 2 brain bleed. This was immediately after a pulmonary hemorrhage, only 72 hours after birth. She had a large enough pulmonary hemorrhage to need PRBC, plasma and platelets. Then only one day later, she had a pneumothorax causing a collapsed lung. Elise was intubated for 33 days, using each one of the three ventilators. She received 3 chest tubes, and 6 transfusions of packed red blood cells. She also had DIC, adrenal insufficiency, roaming atelectasis, sepsis, and severe damage to the lungs. Plus, all the usual micro preemie issues.

I spent three weeks in shock, trying to process what had happened and what was happening. I didn’t bond with her for over a month, because I feared she would die. I was protecting my heart. I felt tremendous, debilitating guilt. I blamed myself. I couldn’t carry a baby to term it seemed, and this time I had failed Dustin and Elise.
Eventually, I accepted the new normal that was my life. Every day back and forth. Moment to moment, care times and Ronald McDonald house. Each day feeling longer than the one before it. Eventually she improved enough to where I could bond with her, hold her. The infusion pumps, arterial lines, breathing tube, chest tubes, all were removed over time, but it was so slow. 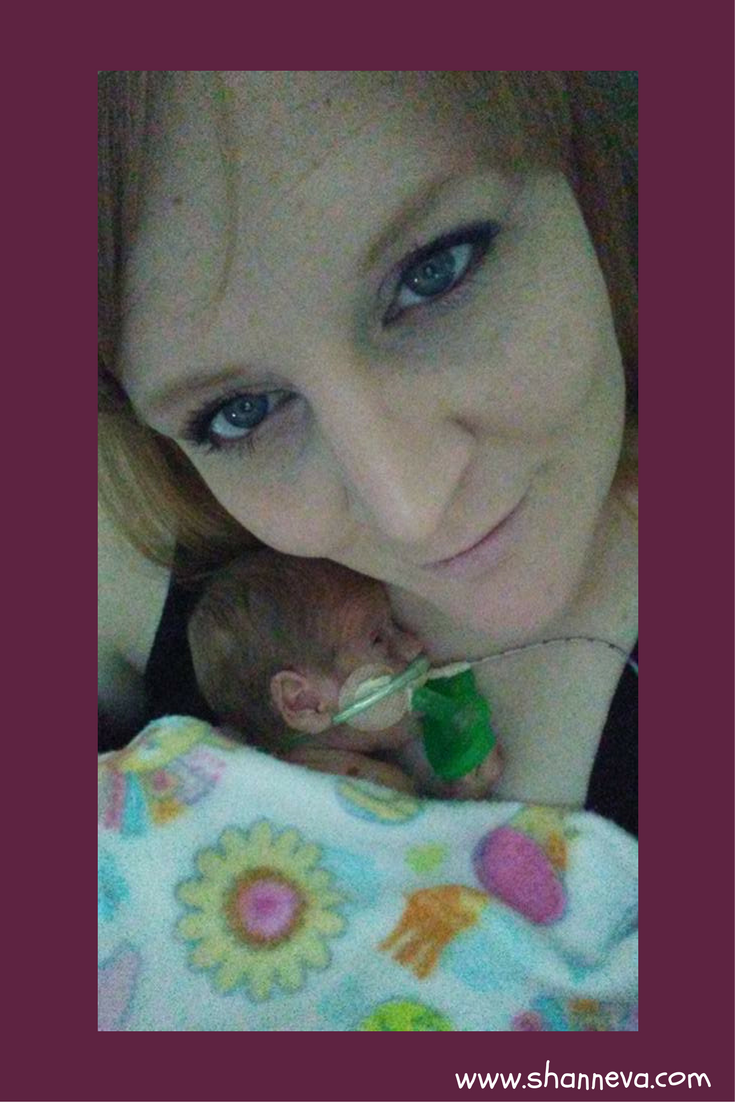 On August 29, we brought her home, which was also a new set of emotions. Excited, but terrified, we realized it was now up to Dustin and I.

4. How is your baby doing today?

Today, Elise is one year old, and at times it feels like I just had her. Other times, I feel like it was ages ago. She overcame so many obstacles, so many life threatening issues. Her medical team was there with us every step of the way.
Elise amazes me every day,  I thank God for this gift. She is a light in our world, filling the void Dustin and I had. She is happy, healthy, content, and BIG. You would never know her beginning and her fight to survive.
Elise is one, almost 9 months adjusted. By all accounts, developmentally she is right on track. She has CLD but has only been ill once with RSV. She was only hospitalized one night and did fine. 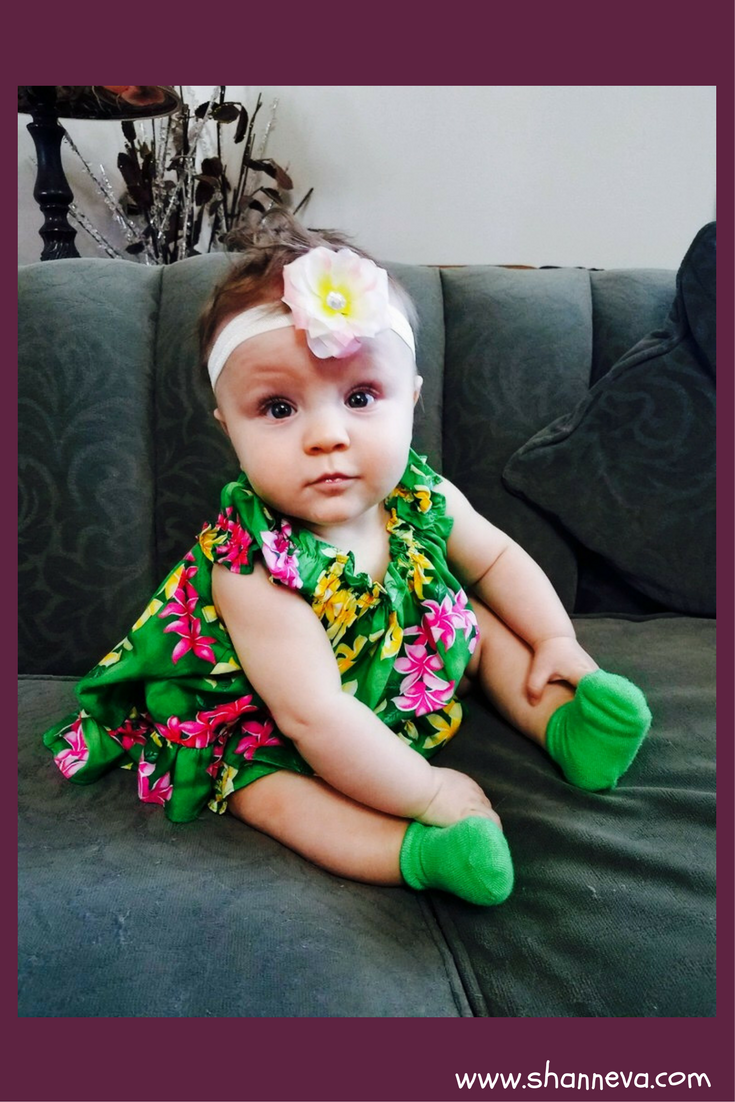 I never forget her beginnings, but I always think about how far she has come. I hope that her journey has provided hope and inspiration to people struggling. Our infertility, loss, and trisomy 13 is a part of her story as well.

5. How are you doing today?

I am back at work full-time, working in a hospital laboratory as a Medical Laboratory Technician. It is hard sometimes, to see babies intubated or on cpap at my work. It reminds me of my life in the NICU, bringing back those feelings. You all know that even when they get to level 2, they have episodes where they need bagged with oxygen. I still feel anxiety every time she chokes. That internal panic, the kind that a mother who has seen too much feels. I have symptoms of PTSD, but not too often. I get depressed sometimes, but mostly I am just so thankful I have a healthy child. I always remember the parents who don’t get to bring their babies home.

Though I may never know what happened, I am thankful for so many reasons. I wear the scars on my heart, but we met some incredible people. The medical team is so special to us. The people at the RMH, they helped me through it when Dustin couldn’t be there. They understood what it was like having a critically ill child. You gain a great appreciation and empathy for families who have a sick child. There is always someone who has it worse.
I realized I have an awesome work family. From giving me time to be with Elise, to having a color run and gun raffle to help with cost, and accepting me back after almost 5 months of absence. They sent me gifts and cards and brought me flowers. Some visited me. The support of the people in NW Kansas, people who I didn’t even know sent me cards and gifts, offering support. My community as well. I am forever grateful to everyone.
This experience has changed us forever. For me it is a good change, with the exception of the PTSD symptoms I have. I never take moments with her for granted. Every milestone is celebrated, no matter how small. I am patient, which I decided comes from 95 days in the NICU waiting for her to grow and develop. Also, from waiting years to have a baby. 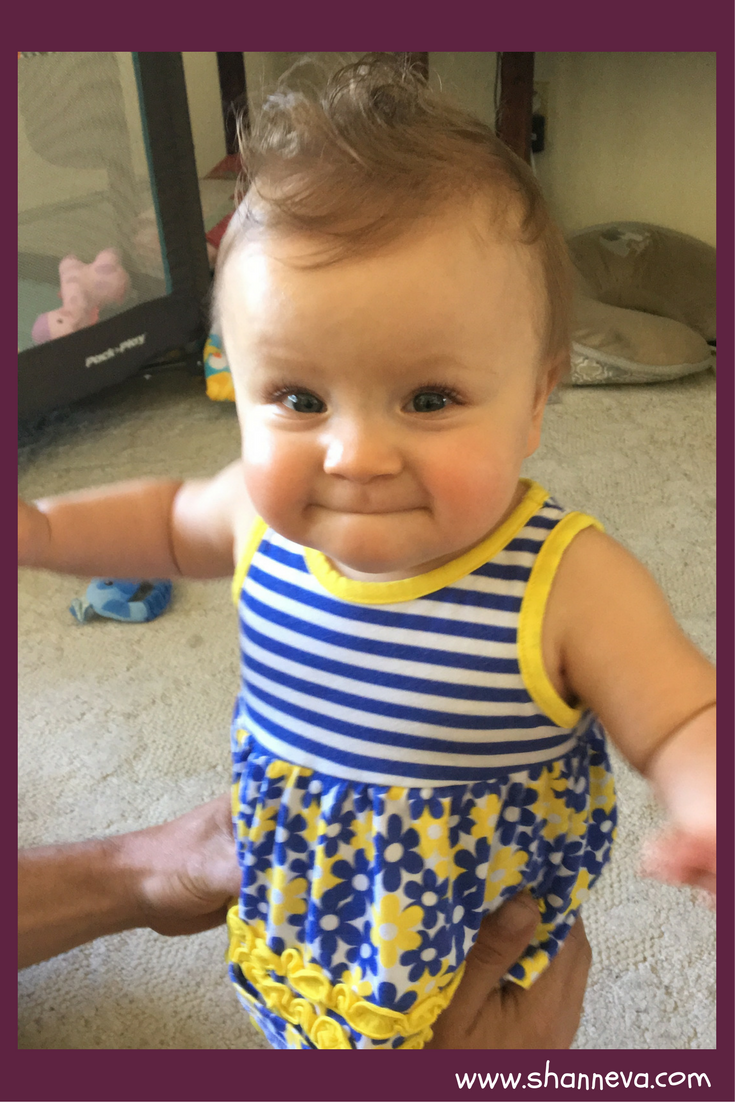 I have helped others going through the same thing. To provide them with hope is so important when it seems that is all you have at times. I have received messages from people about how Elise’s journey has helped them believe in miracles. She is a testimony to modern medicine and answered prayer. We had thousands praying for her.

My advice to other parents is to hang on to the people you love. They will get through the most difficult experience of your life. Always keep hope alive, because your baby needs to feel that from you. Moment by moment, that is all you can do. There are no days, no weeks, just living moment to moment in the NICU.
It takes a strong heart to handle this thing they call the “roller coaster ride” that is the NICU. You will break down, feel like you are losing your mind. Just know all your feelings are normal.
The message is really to pray always, to keep hope alive, and to never give up. Everything is in God’s time. He waited a long time to give us our special miracle. She will always know how proud we are of her, how strong she is, and how much we love her.
Lastly, always remember your little one is stronger than they look, resilient beyond what we think is possible from such a fragile baby. Our babies are our miracles, our journey through life, and we never take them for granted. We know they have survived beyond the odds. They are our micro preemie warriors.

You have been worth every moment spent in the NICU and beyond! While we cannot change the past, we are so thankful we can look toward the future and enjoy every day with you. Thank you God for blessing us with our baby girl! 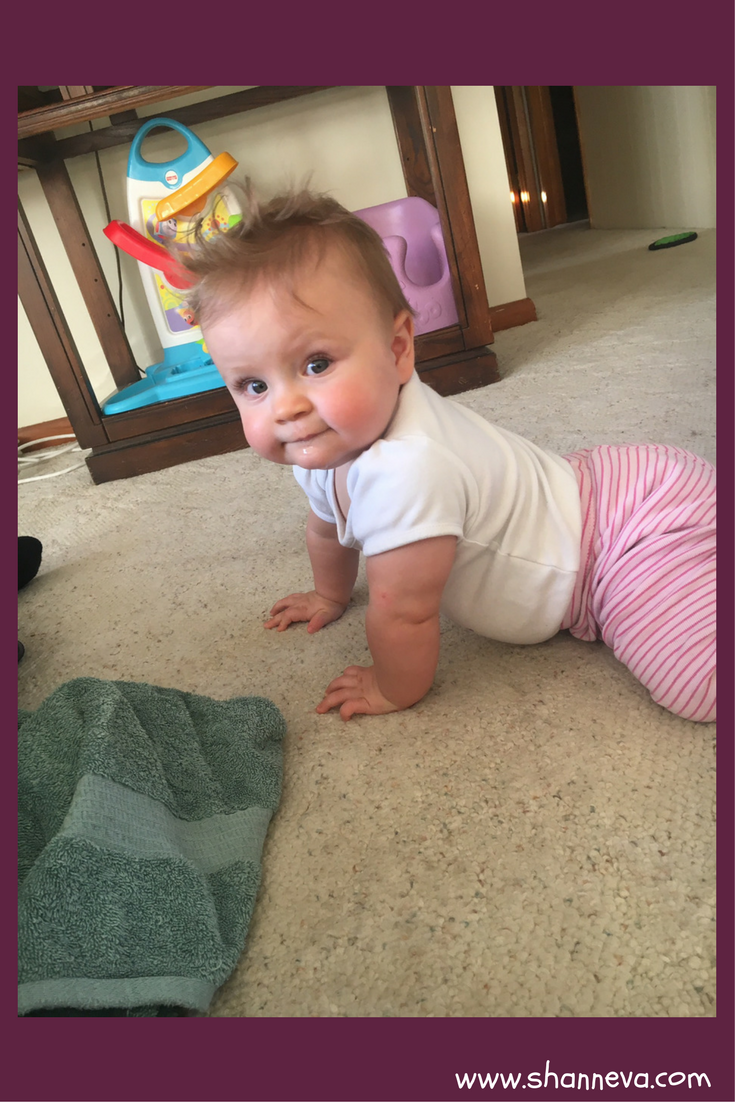 “You never know how strong you are until being strong is the only choice”
Thank you so much to Tessa for sharing Elise and her story of hope with us. Please leave any supportive comments below.