You are here: Home / Blog / Waking is the new Sleeping thru the Night

For the past 3 weeks or so, Big C has been waking several times a night. It’s been for various reasons, but one thing is always the same. I’m exhausted in the morning…and crabby and stressed and unmotivated. OK, so that’s a lot of things, and that’s just me. It’s really impacting the whole family.

Every time he wakes, Little P wakes up too, since they share a room. My husband tries to sleep through it, but sometimes I just can’t get up that third time, so I gently push him out of the bed to go check what’s going on. Mr. B seems to have slept through everything, which is great, since he still has summer school/camp every day.

Let me give you a little background on how we got here. 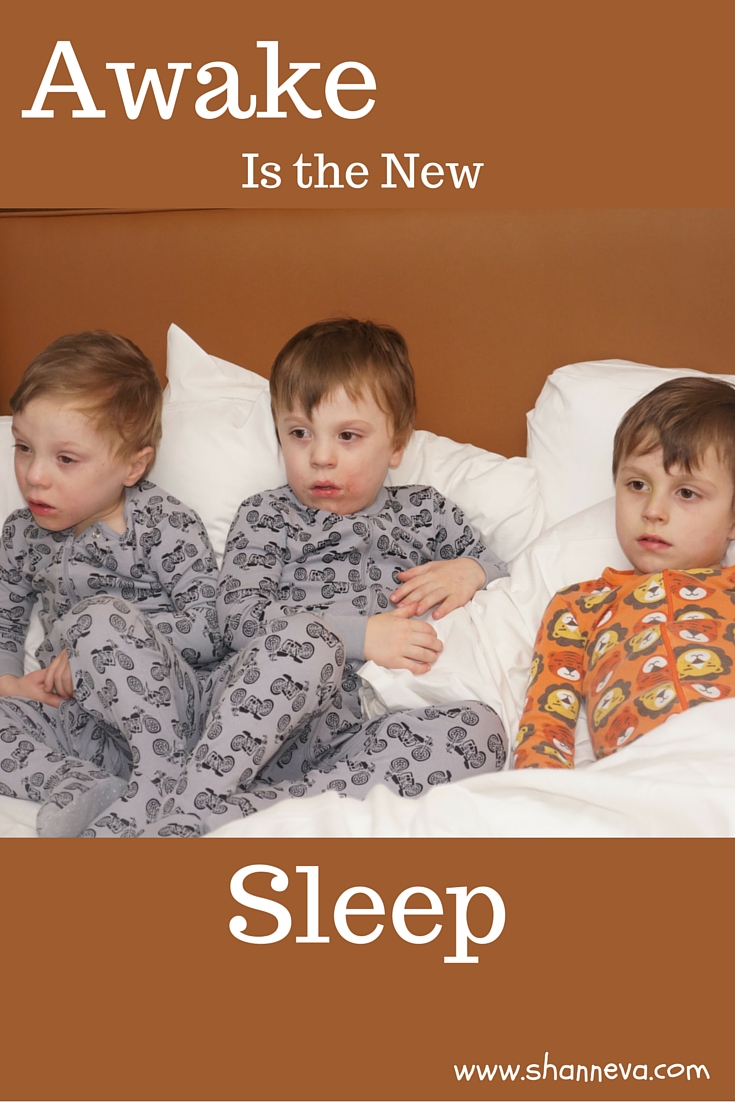 The twins have always been great sleepers. When they were babies, it was bed at 6 pm, and up at 6 am. They slept through the night as soon as we transitioned them to their cribs around 6 months old.

When they transitioned from cribs to toddler beds, we had a few days of craziness, but then it was back to bed at 6:30 pm and up at 6 am.

As the days have gotten longer this summer, they’ve been staying up later, but still getting up at 6 am. Plus, we’ve had a problem with the nighttime routine.

Every night, they gather their toys to sleep with (trains, of course, not stuffed animals,) jump into their beds, I tuck them in, and then I start their music. I also have to pretend to rub cream on their cheeks, but that’s a whole other story. I then let Mr. B turn off the light and shut the door. They also have a baby-proof door knob, so they can’t run around when they wake up in the morning.

Anyways, every once in a while, they would still be awake at the end of the CD, so they yell for me to start it over. Which I do.

A couple of weeks ago, Big C started waking up in the middle of the night requesting it to be turned on again rather loudly. And with crying.

A week ago, Big C decided he is afraid of the dark, so needs the door to remain open, the hall light on, and he now wakes up at least 2 times during the night for the music.

My Own Sleep Issues

I’m sure I’ve had a few nights where I haven’t woken up, but those are few and far between. My anxiety paired with my bladder issues does not make for an ideal sleeping situation. I do take some Melatonin that helps me fall asleep, and most nights after waking to use the bathroom, I fall asleep within 20 minutes or so.

The problem lately is that Big C wakes at different times than I wake, so instead of my usual 1 to 2 times waking up, I’m now up 4 to 6 times a night. It progressively gets harder and harder to get back to sleep.

So, we’ve got to figure this out before I’m not able to function. I’m not even sure that this post is making sense.

None of these thing have worked. At all.

So, we’re going back to square one. We’re moving the beds back into their original position. I’m thinking of adding a comforting story about sleep right before bed.

We’re going to have to go back to lights off and door closed too. I’m not sure how anyone can sleep with all that light coming in. I’m going to be very clear that the music only gets played once, and I’m going to be strong and not go in at every cry. I’ve tried to wait him out many times, but he just keeps crying louder and louder, so to stop him from waking Mr. B, I end up going in. With the door closed, I don’t think that will be a problem.

If you have any suggestions, I would love to hear them! I need my sleep desperately!