A full-term pregnancy is roughly 40 weeks. When a baby is born at 25 weeks, which is about 15 weeks early, they miss an entire trimester of development in the womb. It is a very scary time for everyone involved, and these babies have the odds stacked against them.

My twins were born at 25 weeks, 5 days. I still remember the neonatologist giving us the statistics on survival rates, although I can’t remember what they are. I actually think I blocked them out as he was telling me because it was just too much.

Just like my husband and I, today’s family did not have an experience with a premature birth. Their sweet boy was the first preemie in their family, and he too was born at 25 weeks.

I’m so happy to introduce you to Ephraim, as told by his mom, Sarah. 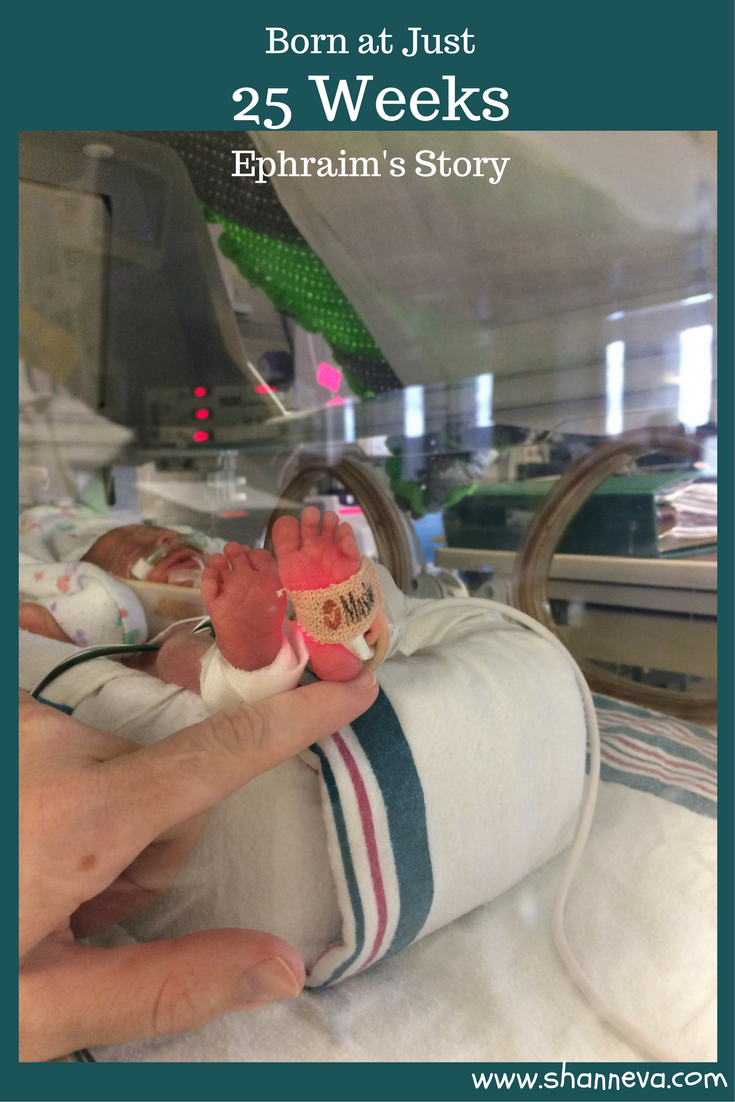 Ephraim was born at 25 weeks 2 days gestation. He weighed 1 lb 11 oz, and was 12.6 in long at birth. He dropped down to 1lb 8 oz, and it took
him about a month to get back up to birth weight. He had to be resuscitated because he did not have a heartbeat when he was born.
(Dad did not tell me this at the time, for good reason.) 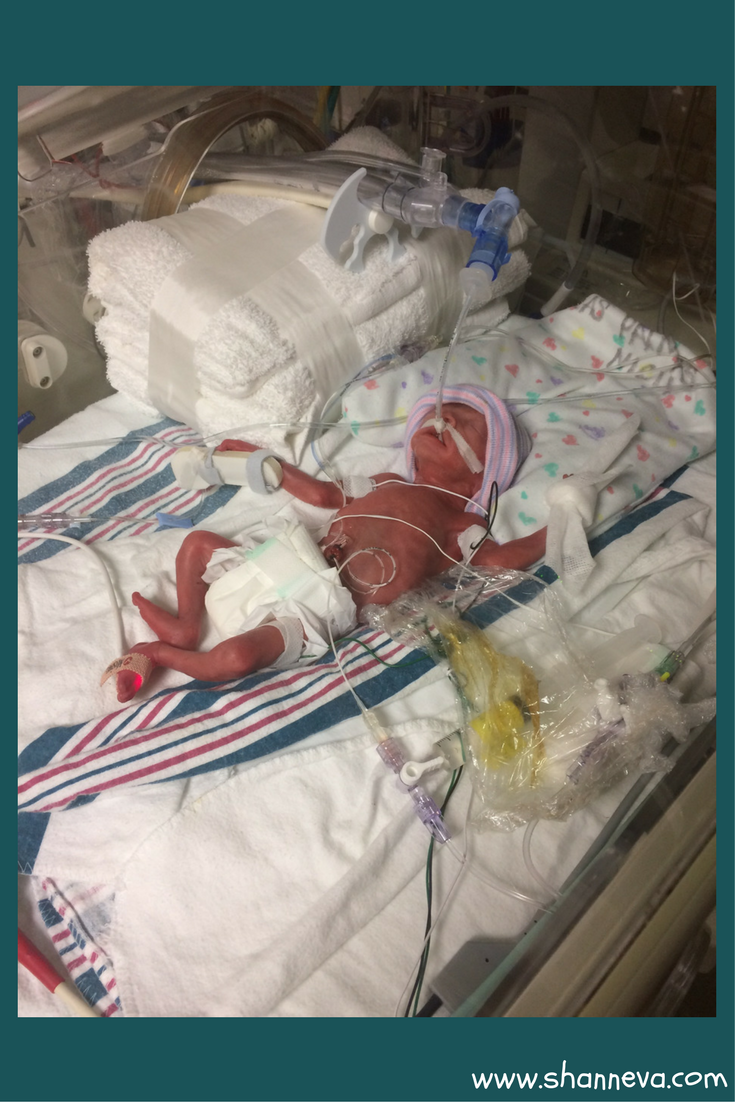 We spent 109 days in the NICU.
The hardest part for me was being patient. I would call, or get there, and there would be no changes that day. We had a lot of those, but I also knew that was a good thing
because it meant that everything was going well.
Out of our entire 109 day stay, our Ephraim only had 1 active infection. He had developed pneumonia from MRSA and another type of bacteria. I was terrified
because MRSA is a type of staph, but he responded very quickly to the antibiotics he was given. He was also moved into isolation for the rest of his stay, which was about 2 months.
Before the MRSA, Ephraim was extubated at about 10 days old. He did well for a week or so but started to decline quickly. He was reintubated and checked for
infection. He had a spinal tap because they thought the infection might be in his cerebral fluid because the other blood cultures were all negative. His little lungs just couldn’t handle working that hard, there was no infection that time.
He was intubated for 56 days, on cpap for 26, vapotherm 15, and wall room air flow for about 5. 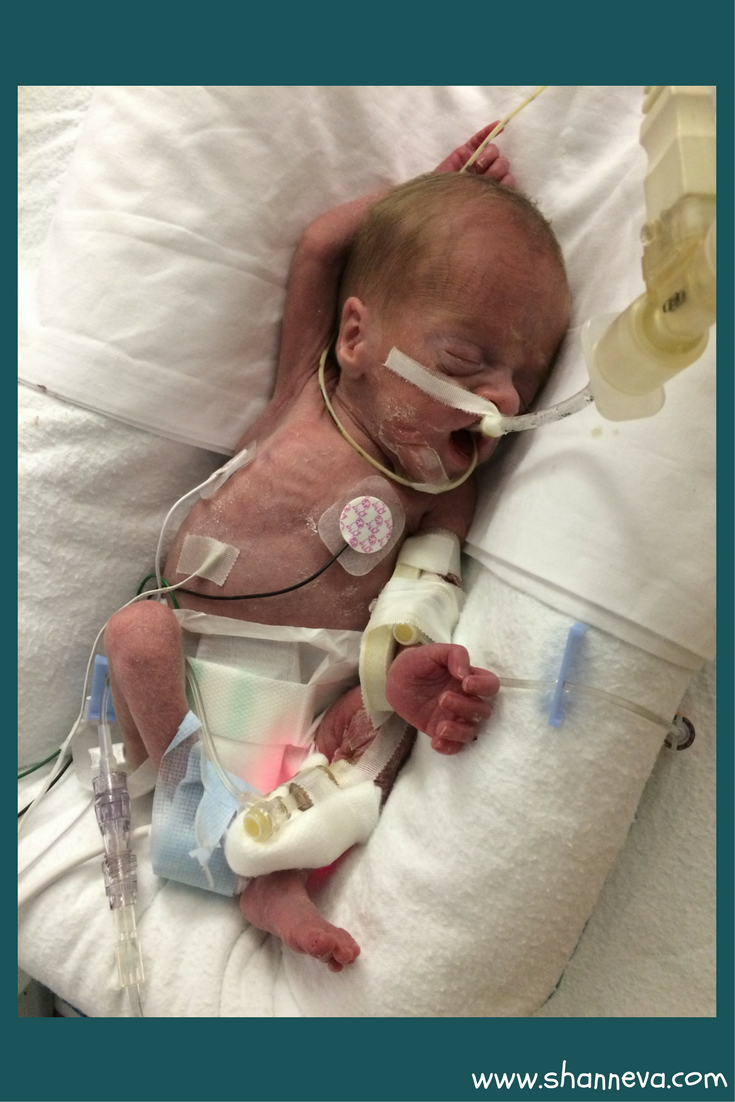 This was not my first pregnancy. I had done all the way to 41 weeks with my daughter, which ended with a c-section (I have a very small
pelvic opening, my daughter was 9lb 13oz!)
I had started bleeding at 21 weeks, and was diagnosed with a marginal
placenta previa. I was in the hospital 3 times for bleeding. It would slow down, but never completely stop, and almost exactly a week later on each occasion I would have a large gush of blood sending me back to the hospital.
The 4th and final time, I was woken up by fluid leaking. This time it was clear with a tinge of pink, and I was having regular
contractions 4-5 minutes apart. I had PPROM and I was in active labor. Turns out my placenta was 50% abrupted. If we had waited another 30 minutes, we would have lost my precious boy. Luckily, I was able to get at least one shot of steroids. I was also put on magnesium, but it did not stop the labor. It slowed it down, long enough to get me to a hospital with a level 3 NICU, but I delivered the same day I went into labor. 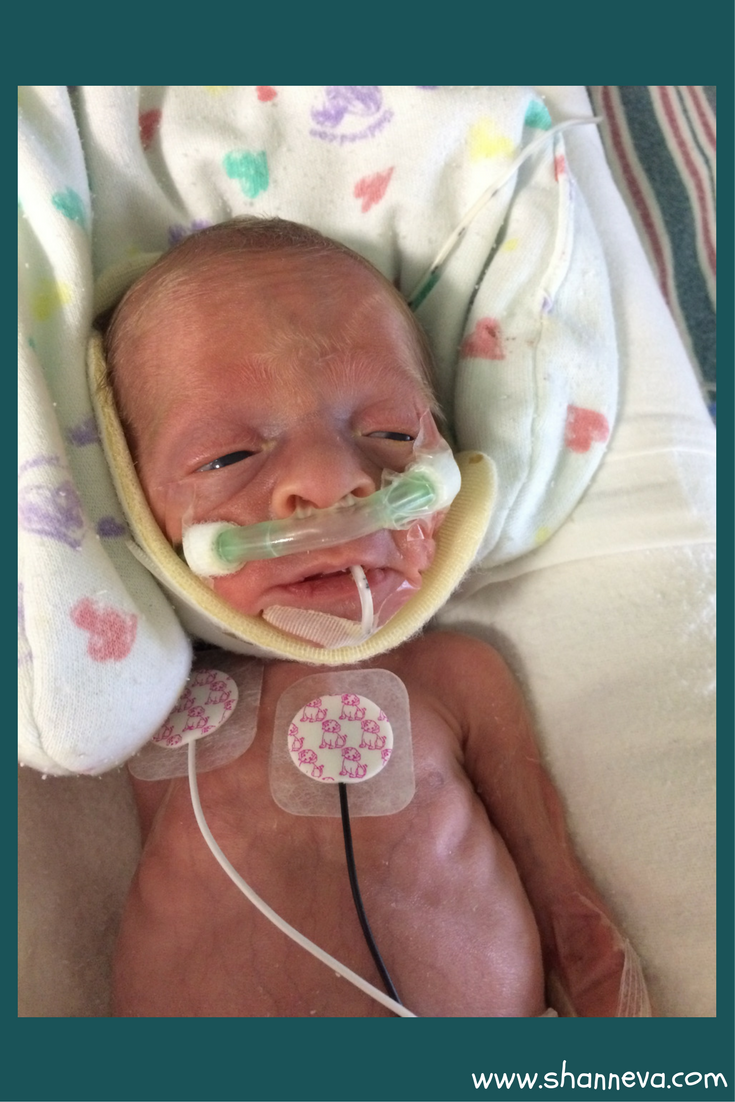 We are doing so well now! We have been home for 4 weeks. Ephraim did not come home on any oxygen! We were told he would because his CLD was
bad enough to require it, but he showed all of his doctors! 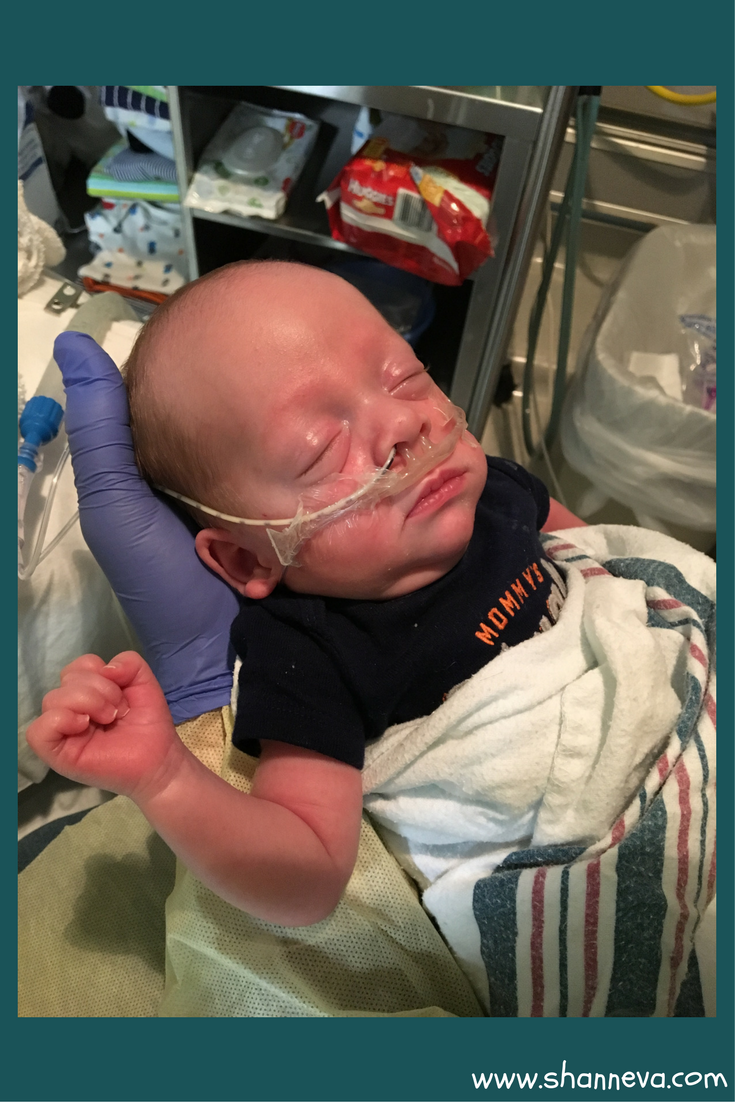 He is on a couple of medications, one being caffeine (which he will outgrow), and a multivitamin. I also fortify my breast milk to 24 calories. 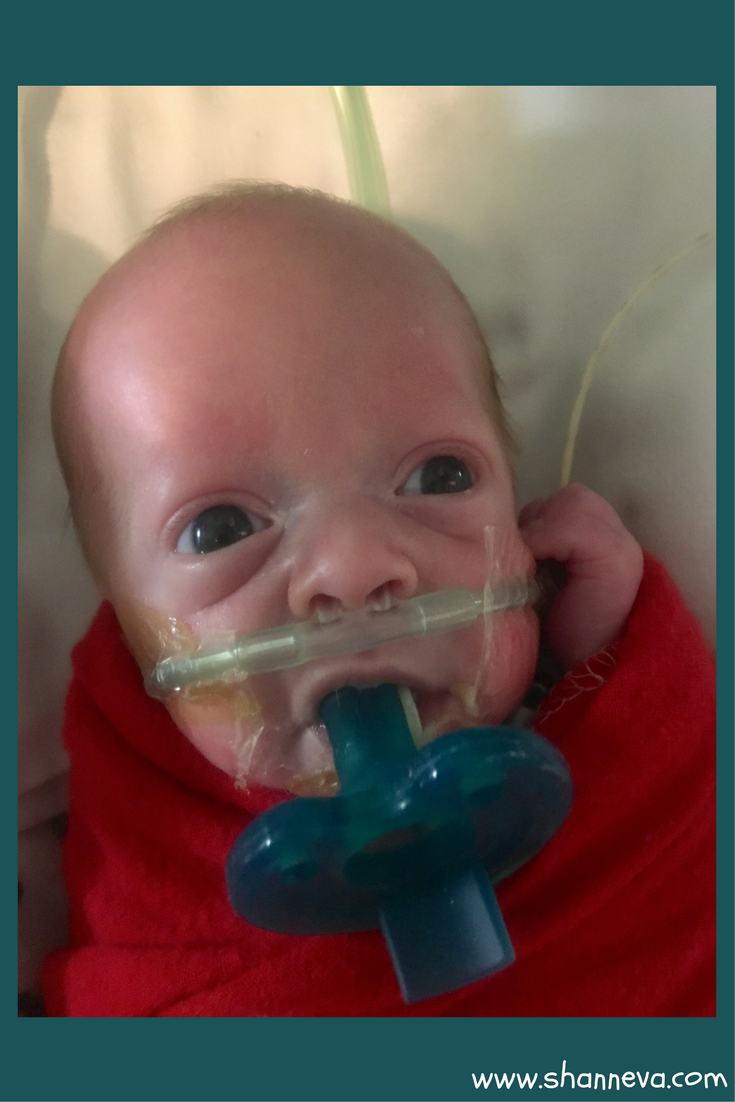 His only issues now are his little vocal chords. He still cannot cry from being intubated for so long, but he grunts and tries to talk. It’s getting
better all the time! 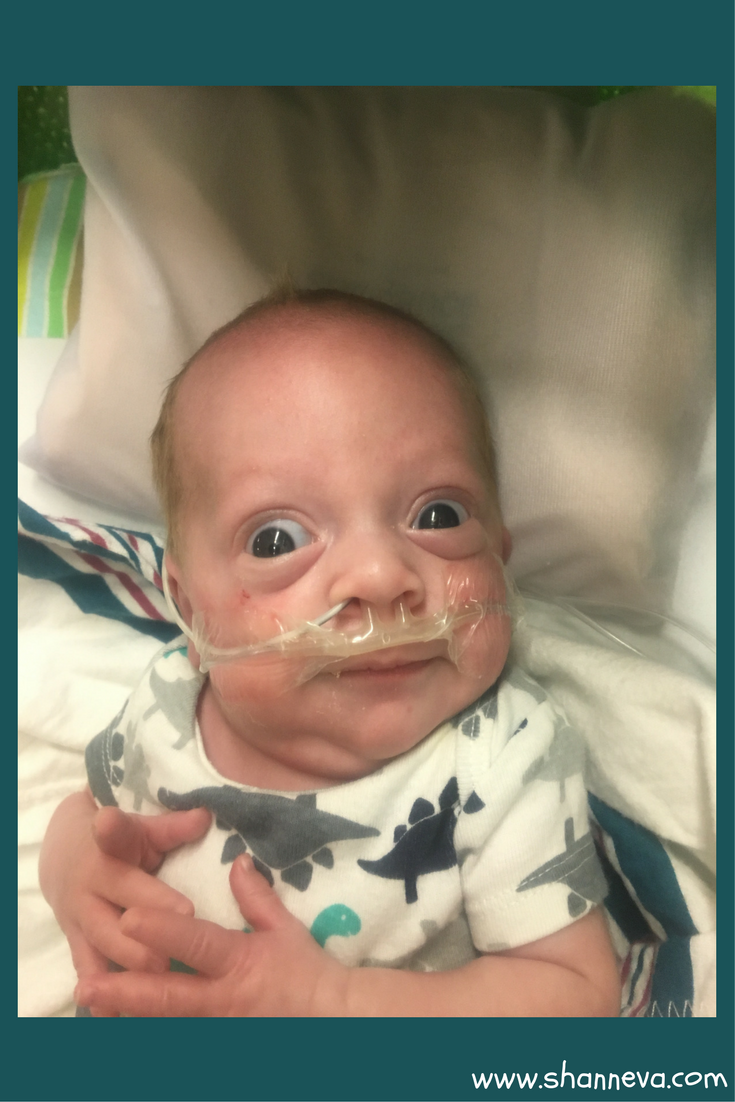 He is starting to smile and really respond to your voice. His doctor cannot believe how good he looks. She is so impressed with him and believes he is hitting all his milestones so far. He will be getting a speech and physical therapy evaluation soon to see if he needs anything. We are amazed by our little miracle boy every day, and have been so blessed in our journey, so far! 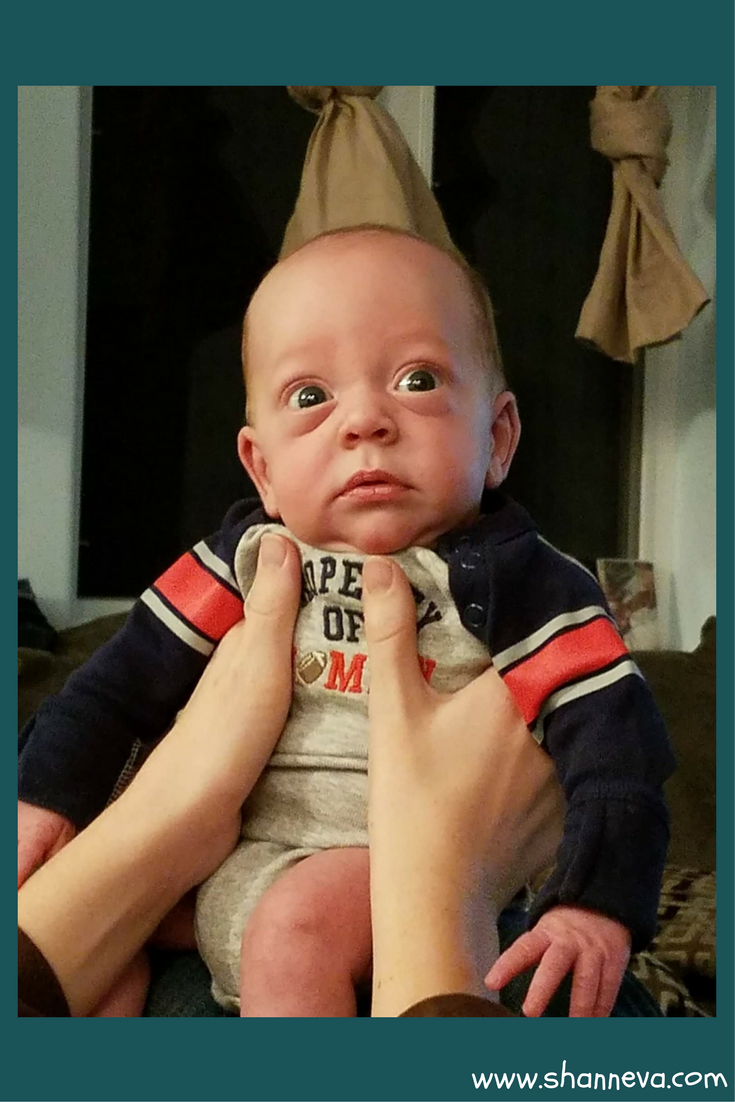 5.What advice would you give to a new preemie family?

Staying centered is SO important. If you get too high on the positives, the negatives are going to send you crashing even harder.
This was the most important thing for me. I could not handle even the
little things at first. The further along we got, the easier and more practiced I became at handling the bad.
The other thing that helped us was asking questions. We wanted to make sure we understood what was happening to our son. We asked so many questions that even the nurses
got sick of us. Ha ha! But, it helped us cope!
I am in a couple of NICU and micro preemie mom groups on Facebook. I find support there, and from my family. My family has been amazing throughout this entire
process. Ephraim is the first preemie like this in our family. 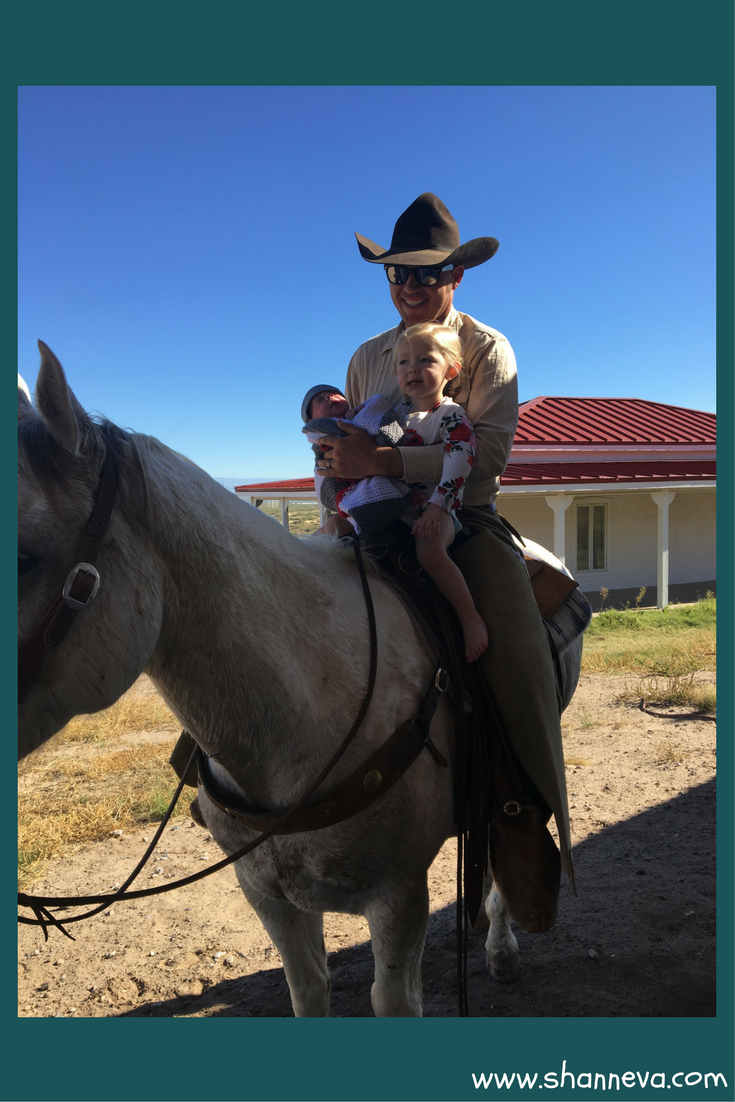 Thank you so much, Sarah, for sharing your strong boy with us.
Please leave any supportive questions or comments below.