You are here: Home / Blog / Birthday Party Place: How to find the Perfect Spot

For the first time EVER, we didn’t have our son’s birthday party at home. He had decided he wanted to invite school friends, and wanted to have it at a place where there were lots of activities. Since we’d never done it before, I wasn’t really sure where to start. So, with a lot of research, I found the perfect birthday party place for him and his friends.

Today, I’m going to share the reasons our birthday party place worked. I’m also going to share some things I learned from the experience to help you decide what to do for your next celebration. 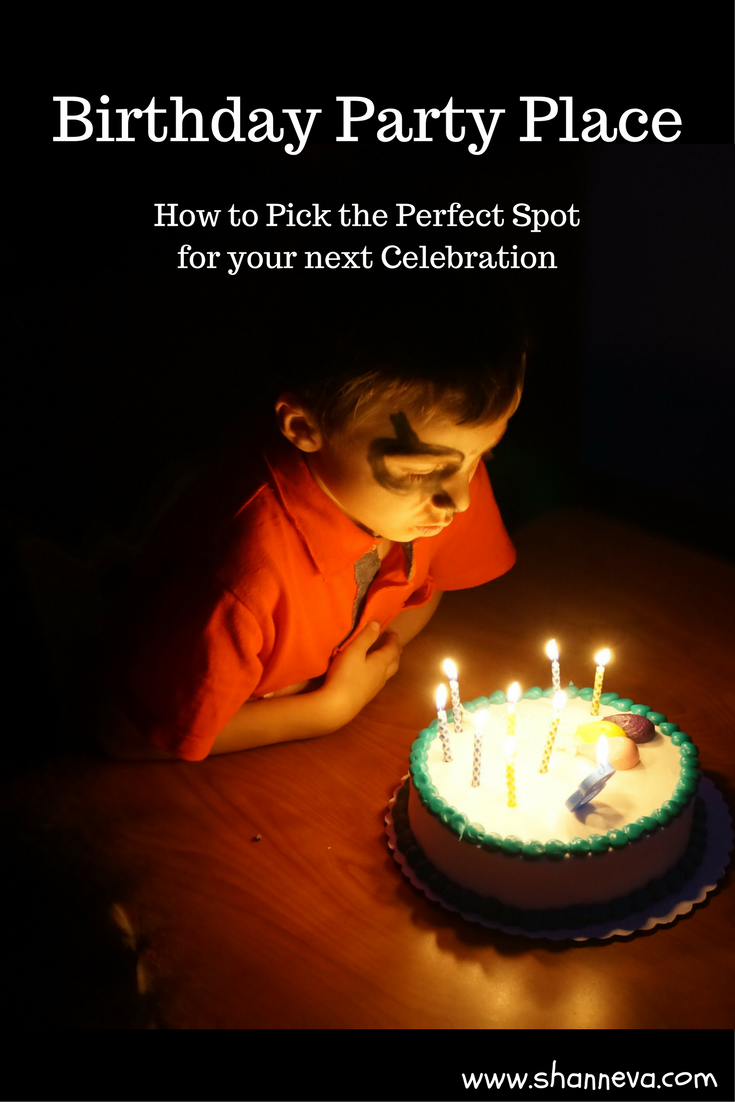 *I received a discount from Stonefire Pizza Co. in exchange for my honest review. All opinions are my own.

How I picked our Birthday Party Place

Mr. B has been to a few birthday parties at party places, but I’ve never really looked into pricing or anything before. So, my first step was to search the Internet for local places that offer party packages. Some were way out of our price range, some were too anxiety inducing (think too many possible injuries,) and some didn’t have enough activities for the kids.

How I narrowed down the possible birthday party place:

I ended up finding a place that had big kid rides like bumper cars and a ninja course, along with a bouncy house and little kid rides, and games for everyone. Their party package included a buffet, and we could bring our own cake. The manager responded to my email right away, and called me to discuss all the details. She was also very responsive to any questions, and her confidence in her staff made me confident in them to show everyone a good time.

When I told Mr. B we would be having his party at StoneFire Pizza Co., he was super excited. He had been their once before with a friend, and had been wanting to go back for a while. He was also excited to invite some school friends.

We couldn’t invite his whole class, as there are 24 students, and that was a little over our budget. So, he picked his friends, and I emailed invitations. He was instructed not to talk about the party at school because we didn’t want anyone to feel bad that they weren’t invited.

Our Experience at StoneFire Pizza Co.

When we arrived, we were introduced to our “Party hosts,” and taken to our private room. Everyone on the invite list just had to tell the front desk whose party they were there for, and would be given a wrist band. They would then be taken to our room.

Everyone was super friendly, helpful, and polite. We were off to a great start!

We had the room for the first 90 minutes. The Party Hosts said that all the adults were free to go eat at the buffet, and they would entertain the children. For the whole 90 minutes!!!!! That was awesome.

The hosts made balloon animals, did face painting, and played games with the kids.

They took them all to the buffet, and made sure everyone stayed together. Even though it’s called StoneFire Pizza, there are tons of other options. There is a salad bar, make your own tacos, a baked potato bar, chicken nuggets, fries, and mac and cheese. There are also dessert options, including cookies, soft serve ice cream, and slushies. Plus, you can get soda, water, or juice.

After eating, they each decorated a pumpkin, got some cotton candy, and watched a magic trick.

Mr. B also got to go into a booth and grab for tickets. The tickets could be redeemed in their prize center, and the other children had chances to win them during the rest of the party. Mr. B did a pretty good job, but the hostess also helped him out, which was awesome.

Then, it was time for cake.

It was perfect timing because just as the sugar kicked in, it was time to go and play in the other room. Each child got a $20 game card to play ticketed games, an hour to play non-ticketed games, like air hockey, and unlimited time to play on the bumper cars, bounce house, rock wall, and frog ride. Plus, they each got to run through the Ninja Warrior Course. I’m just tired thinking about it all again.

There was really rides and games for every age. The twins enjoyed the frog ride, and played a lot of the games with bright colors and spinning wheels.

Mr. B and his friends loved the bumper cars, but the Ninja course was a close second.

Mr. B also loved playing the grabber game, and even won a big, shiny ball.

Once the kids had used up all the money on their card, they could go and redeem what ever tickets they earned (which automatically go back on the card,) in the prize room.

It was then time to round everyone up, grab their stuff, and find their parents. The party hosts had taken all of our stuff to a locked room, and I gave them my ticket to get all of our jackets and the decorated pumpkins.

In addition to taking their pumpkin home and their prizes, each child received a goody bag.

We made sure everyone was accounted for and left safely. Then, our family, along with our friends that had helped watch the kids, headed back to the buffet for some ice cream, cookies, and slushies. We found another room for the kids to play in, with slides and climbing walls.

We seriously had to drag them out to go home because us parents were tired!

Things I learned from our Party

It was so nice to not have to worry about cleaning the house, and then trying to remember where I shoved everything, since that’s my normal cleaning method. I saved tons of time with the lack of preparation needed. I do enjoy shopping and crafting with my birthday party themes, but I really spend a LOT of time on it. With school, work, and life, this really was nice.

I also didn’t have to worry about picking a menu, shopping, or cooking (well heating up – who are we kidding?!)

Plus, I didn’t have to stress out about the weather. Our house is not huge, so we usually have parties outdoors. October is a really crazy month for weather in Wisconsin. The day of the party was rainy and cold, so woo hoo for an indoor space!

Since it was a public space, the only thing that was stressful for me was keeping track of the kids in a public space. During the first 90 minutes, they were in a confined space of the party room, but for the last 90 minutes, they had the run of the place. The place was secure, with guest services being right at the front, and gates to go through, but I’m a mom.

The manager suggested at least 4 to 6 adults, with the 13 kids we were having. We ended up with 6 adults, plus me and my husband, but it was still hard to keep track of every single kid at every single moment once they were out of our private party room. We all took turns doing laps around the games and activities, making sure we had an eye on everyone.

If  the party would have been for the twins, I would have had all the parents stay. Since they were mostly 8-year-olds, I think the number of adults was fine.

But, we came up with an idea to help if you’re in charge of more than one kid:

If you have money in your budget, buy some cheap, bright shirts at a place like Michael’s or Hobby Lobby. If you’re crafty, you could even put a birthday message on them, and give them as favors.

Or, if you don’t want to buy something, tell everyone to wear the birthday kid’s favorite color.

That way, the kids are a little easier to spot.

To Party at Home or Birthday Party Place? 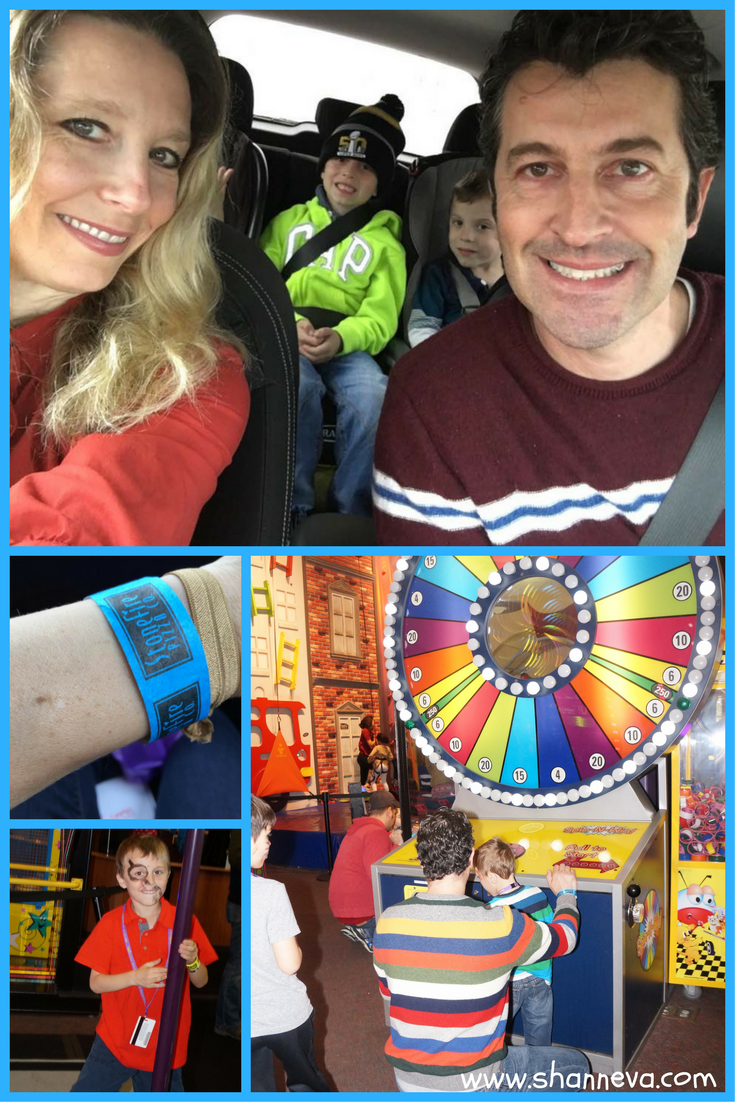 Overall, we had an awesome first time experience with our birthday party place. StoneFire Pizza Co. was a great value, with a private room, a buffet, and tons of entertainment. All the kids had a lot of fun, especially the birthday boy.

If you’re in the Milwaukee/Waukesha area, you can check out all their different party packages HERE. Not only can you have a birthday party, but they have private rooms and a sports bar for the adults. If you mention Shann Eva’s Blog, you can get a 10% discount on your party!

Now, the twins want their birthday party there too!

So, how do you celebrate birthdays?