Boy oh boy. It’s been a rough few weeks. Between me being sick, the twins boycotting naps, and my husband working a lot, I’ve been a little stressed. I’ve also fell behind in my daily tasks, which include writing on the blog, and as you read this week, working out at the gym.

No dolls, no playing dress-up, and no braiding of the hair. Instead, it’s  Thomas, Ninjago, and destroying things.

I thought I would give a little update on my three boys to give you a glimpse into the life of a boy mom, who is also a twin mom, or maybe, just a mom.

Mr. B (which is now how I’ll refer to him instead of  “my oldest”) is growing up way too fast. 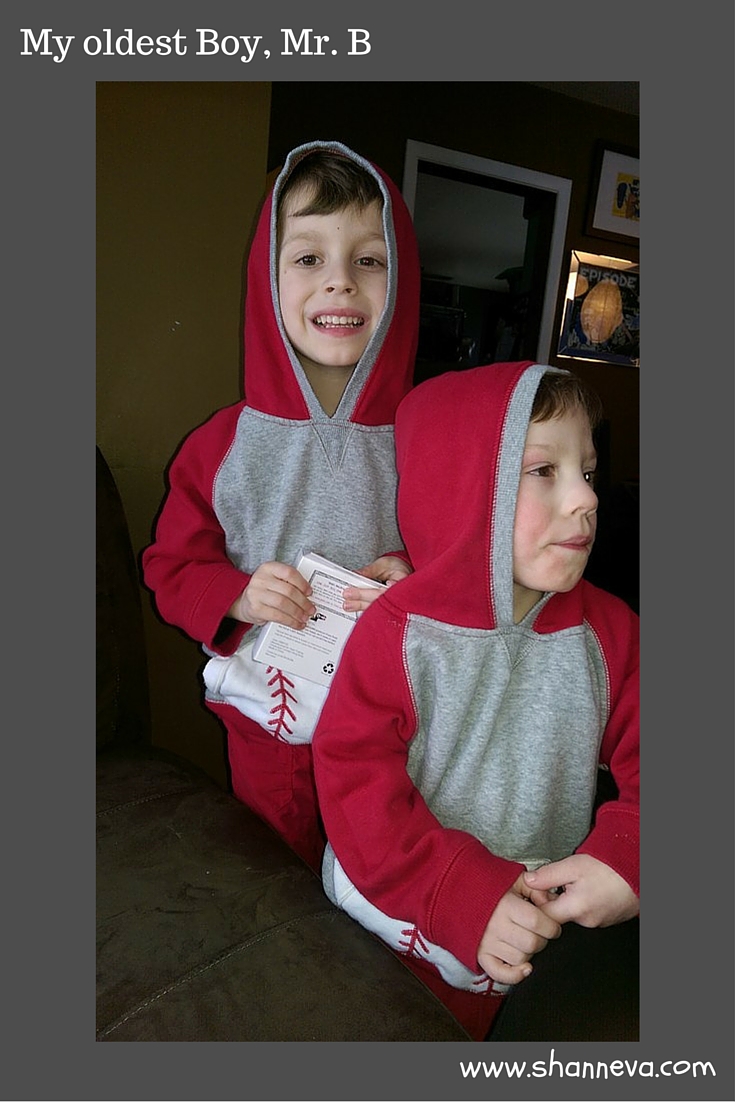 He has discovered the world of computer games, and now there is no turning back. He started on his Leapad, but now has moved onto the computer and is playing Minecraft. I have no idea what the appeal is, but it seems it’s a big hit among the boys in his class at school. He builds things, starts things on fire, and destroys Zombies. All in the game, of course.

As for school, we had his second conference. I don’t know about you, but I don’t remember having conferences in Kindergarten when I was little. Actually, all I remember doing in Kindergarten was taking naps and playing house. Times have definitely changed. He’s learning to read, plays on the IPad, does Math, and lots of science. Last week they even made different kinds of paper!

Overall, we got a good report from his teacher. He seems to be getting more comfortable talking and explaining things in front of others. He still gets frustrated with reading, but I’m hoping it will just click soon. His Dad is really good about having him practice for at least a half hour every night, then reading to him before bed. Plus, there’s the incentive of an amusement park ticket for the summer, if he does so many hours of reading before the end of the month.

The saga with his ears continues. He is going back to the Ear/Nose/Throat Doctor today to find out what we can do about the fluid in his ear. After a number of ear infections in the Fall, he has been stuck with this fluid for several weeks, and the Audiologist says it’s causing hearing loss in his left ear.

As I mentioned, my worst nightmare has come true. The twins have stopped napping consistently.

Our former nap routine consisted of me putting my Little P (as he will now be called) down first, letting him fall asleep, then putting Big C (his new blog name) down. They got their music, a toy, and mom got 2 hours of work done. 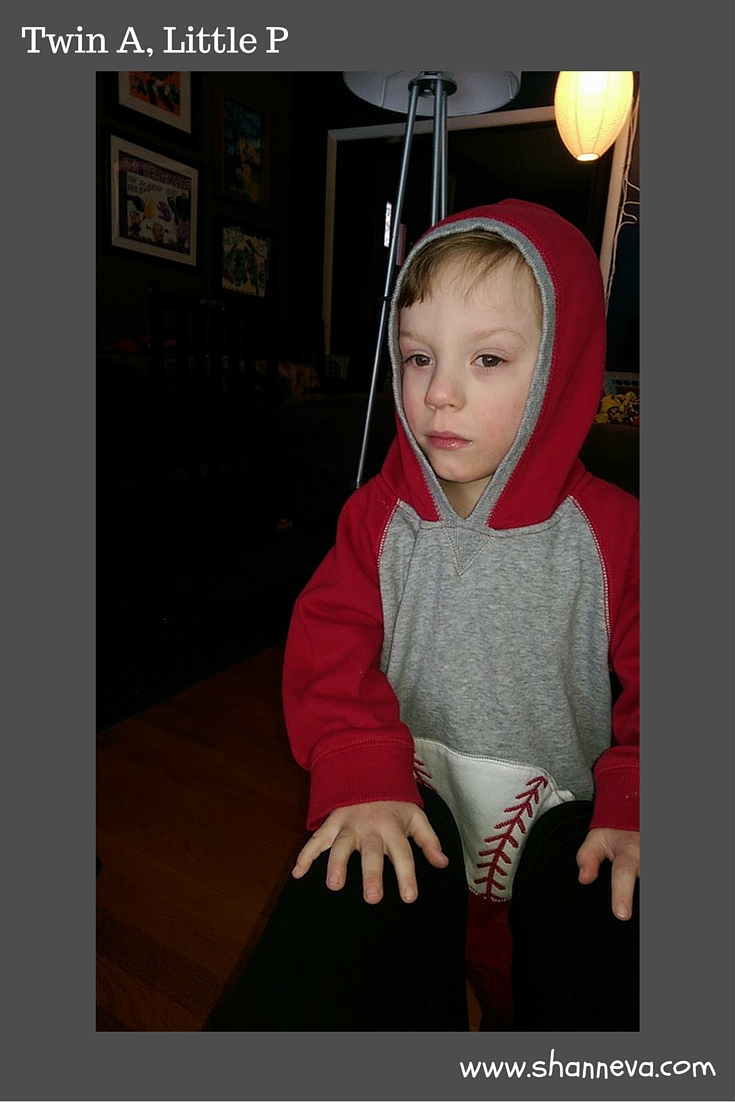 Now, Little P does not go to sleep, but waits patiently for me to come and see if he’s sleeping. After about a half hour, I just give up and put his brother in the room. Chaos ensues, and nobody naps. I don’t work, and I just want to cry.

Yesterday, when I went in, and he wasn’t sleeping, I just brought in a bunch of books with his brother, let them both get in the same bed, and left the light on for them to read and relax. I figured I would get at least a half hour of peace and quiet. Oh no.

About 10 minutes in, there was a huge crash. The only lamp left in their room, had been pulled from the top of the dresser, the shade broken off, and the top of the lamp broken off. They each blamed each other, but there was nothing I could do. I couldn’t send them to their room…they were already there. Instead, I took the broken lamp, their music, and all the books out of the room, and shut the light off. I told them they would have to stay in until they could settle down. Which they didn’t.

By that time, Mr. B was home, so I let them into the living room. Mr. B went to play Minecraft, the twins went to play trains, after I set up a huge track for them. I then went to check on dinner.

Little P had blood dripping from his cheek, popcorn was thrown all over the floor (I forgot about the bowl Mr. B had partially eaten when he got home from school…silly mommy leaving something out) and both twins were screaming and running around.

I’m still not sure if he scratched himself or his brother did it, but I wiped him off, cleaned his wound, and gave him a band-aid.

Luckily, it was then time for dinner. If you can’t tell, I’m being sarcastic. Dinner time is one of the worst times of the day. Tired kids that won’t sit still, don’t want to eat what I’ve made, and just make me want to pull my hair out. But, that’s a whole other blog post. 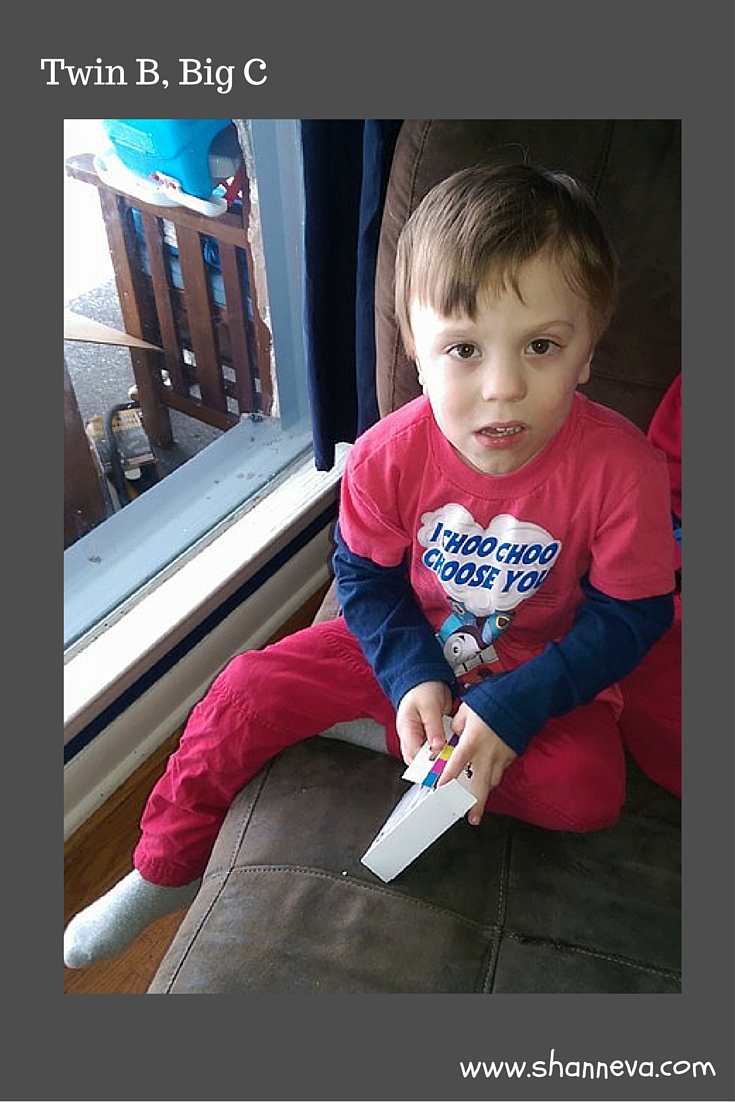 Other than the non-napping, the boys have been exceptionally wild lately. I think they are really testing their boundaries and my patience.

As I was putting Big C in the car from the gym, Little P took off running into the middle of the parking lot.  I left Big C in the car, and took off after him. Just as I reached him, I wiped out on the wet pavement, luckily landing on my booty and elbow, instead of my head (which I did a few years ago.) So, we left the gym with a giant bruise to my body and my mommy ego.

Boys will be Boys?

So, as you can see there have been a few bumps both literally and figuratively lately in my life surrounded by boys. I’m hoping this destructive, wild, boundary pushing stage will end soon, or at least become a little less of any of those. And soon.

Do you have boys? How do you handle their behavior?