Premature birth can come unexpectadly, but often times it comes after a complicated pregnancy. This is so hard, as one highly emotional experience leads to another.

So many different things can lead to a complicated pregnancy. Most of the time, even the doctors don’t know why it happens. It can be hard not to blame yourself, but you did nothing wrong.

My twin pregancy was a very complicated pregnancy. I went to see a high risk specialist once, sometimes twice, a week from week 16 until I delivered at 25 weeks, 5 days.

I then went from staying in the hospital for almost 2 weeks, to my babies being admitted directly into the Neonatal Intensive Care Unit after their birth, where they would stay for the next 3 months. A whole year of hospitals.

All from a complicated pregnancy. 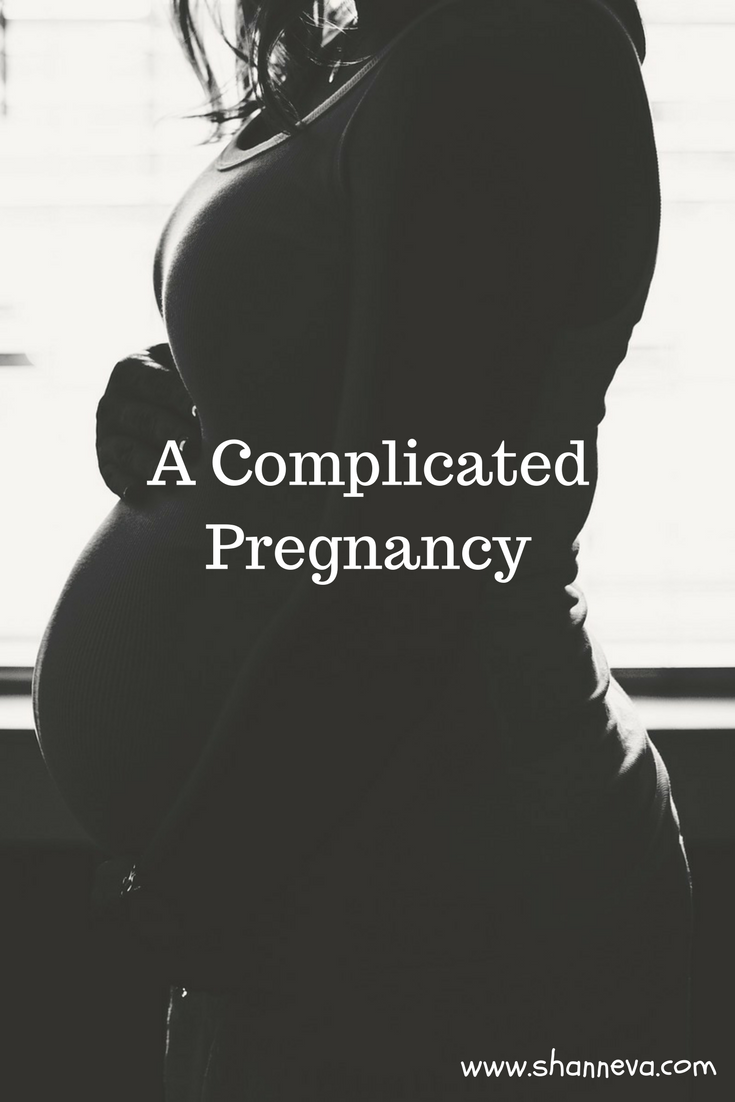 Today’s family knows a lot about having a complicated pregnancy. I’m so happy she decided to share her journey with us.

Please meet Severide, as told by his mom, Daniella.

Severide was born at 28 weeks. He weighed 2 lbs 13 oz and is the surviving twin from vanishing twin syndrome. We lost his twin at approximately 7-8 weeks.

He had a grade one brain bleed on his right side and 2 cysts on the left. Both, thankfully, resolved themselves.

Severide also suffered from multiple bradycardias/apnea spells. He was on caffeine to make his brain more aware and to remember to breath. They constantly upped the dosage, as he would have way too many in a shift. 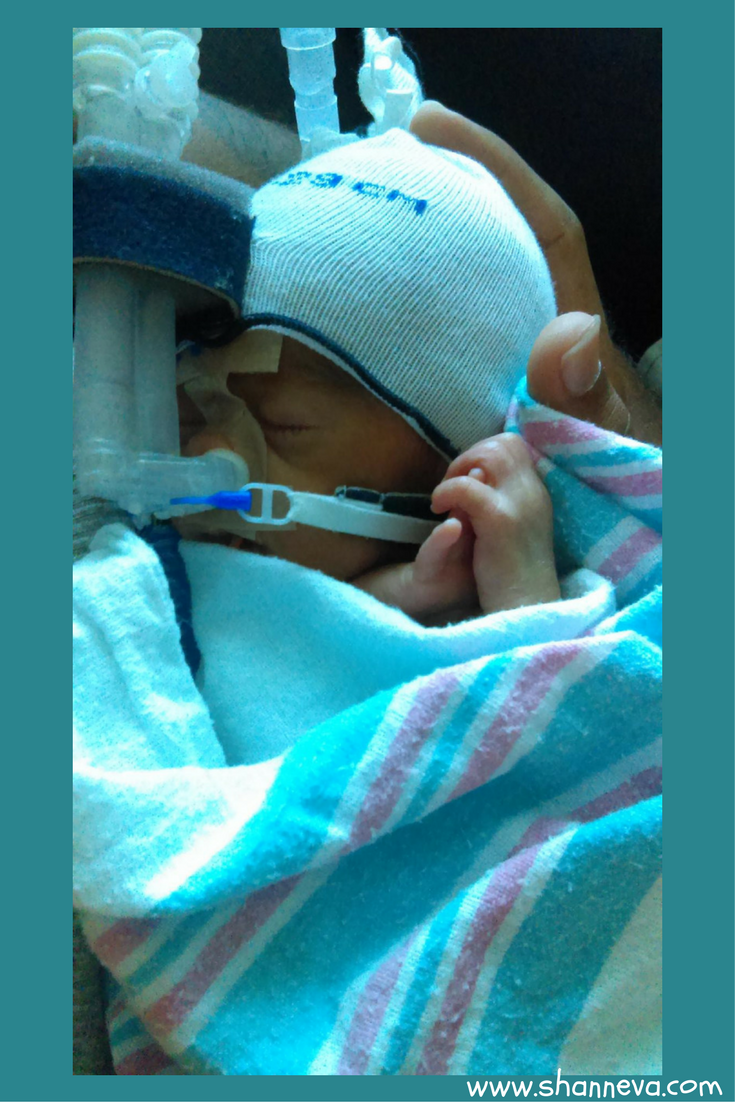 He went through a period of struggling to gain weight. He was on very high calories and would gain 2/3 oz a day. Once he was catching up, they lowered the extra calories. Then, he would stay the same weight for 3-4 days before they upped his calorie intake once again.

Severide also had very bad anemia. They checked his levels every day, and they were very low, but not low to the point of a transfusion, yet.

Severide was up for discharge after a week off of caffeine and taking full feeds by mouth and no signs of jaundice coming back.

The day before discharge (June 1, 2016), his red blood cell count got dangerously low. They administered a blood transfusion, and watched him closely to decide if he was still coming home. He suffered from 2 bradys that night but not severe enough to keep him in the NICU. 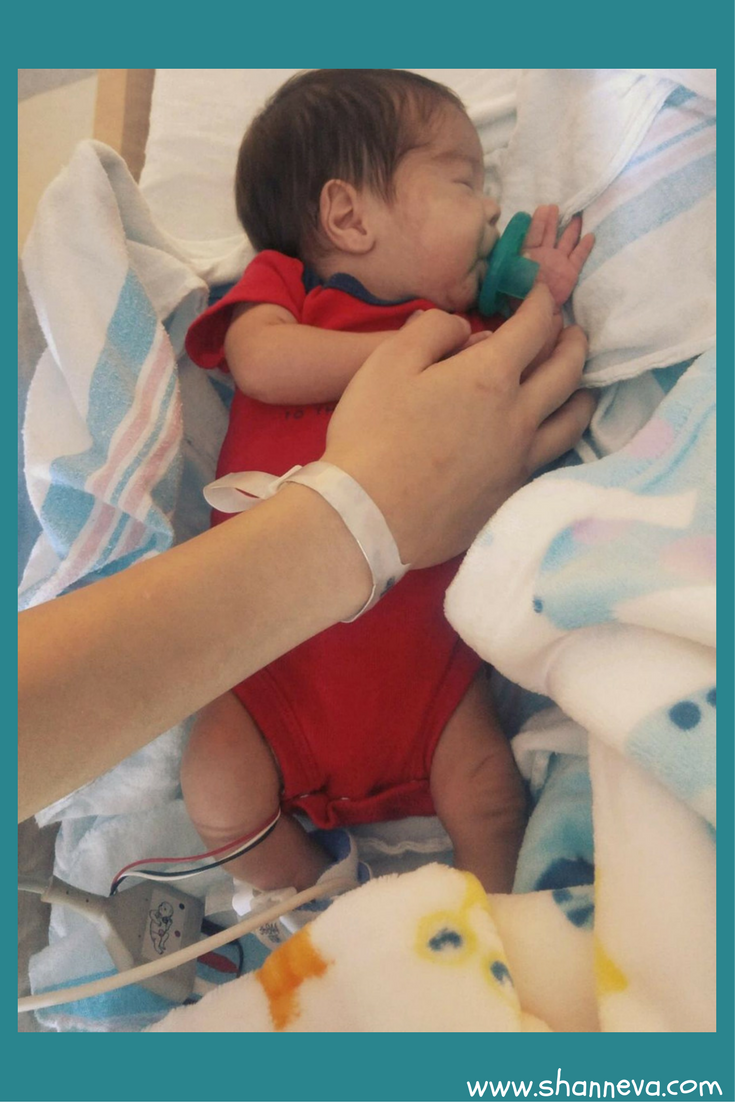 I had a complicated pregnancy from the start. I began to bleed at around 8 weeks. They stated it could be normal, since some women still have a period.

Our first ultrasound at 14 weeks we found out there was another baby, but the only one moving was Severide. He was spinning around in circles enjoying his time.

I was in the hospital 2 times after that for severe abdominal pain. The pain was the same as when I began to bleed. One was 2 weeks after my ultrasound, and they sent me home saying it was round ligament pains. We told them we were worried because we already lost his twin. The attending nurse told us that it doesn’t count because I didn’t miscarry the twin. It was just reabsorbed.

I was then back in hospital with the same thing about a month later. This time they hooked me up to monitors, and asked me if I felt tightening or pains because I was having contractions. They were not severe ones. After some fluids, I was sent home to check with my OB.

I was sent for weekly cervical lens and my cervix was 2.7. So, I was put onto bedrest for a week to see how it would turn out. It stayed the same, so I was taken off of bedrest and was told to resume my daily activities.

At 27 weeks 5 days (April 8, 2016 at 7 pm) my water broke (PPROM). We rushed to labor and delivery. I was given antibiotics and magnesium to stop labor twice. I received 2 steroid shots to help with his lungs. So when he came, he would be able to take a breath.

Finally, I was in my own room Saturday night. Sunday morning I ate some breakfast for the first time since Friday afternoon.

Sunday afternoon, they came in and asked if I felt him moving. They had no movements as they were repositioning the monitors. After no sign of movements, back to labor and delivery I went. They performed two 15 minute movement ultrasounds, and failed both of them. The second ultrasound was administered for an extra 5 minutes and still nothing. Every contraction I had made his heart rate almost stop to the point of barely making it back up.

It was shift change, and the next doctor came in and introduced himself. He said they were going to take him via cesarean section after the women in the next room gave birth. She was already a 6. At this point I’m still on magnesium and completely out of it, so it didn’t phase me like it did my fiancé.

Severide was born at 10:21. I was discharged 5 days later, and diagnosed with PRROM and Incompetent cervix. 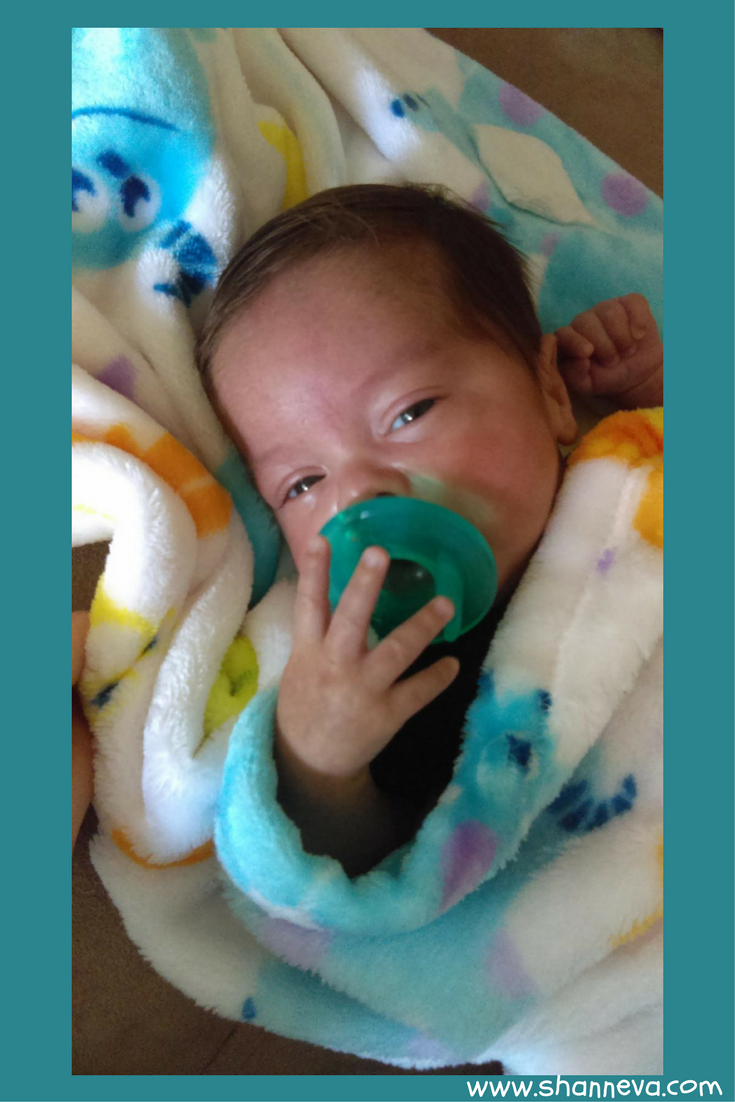 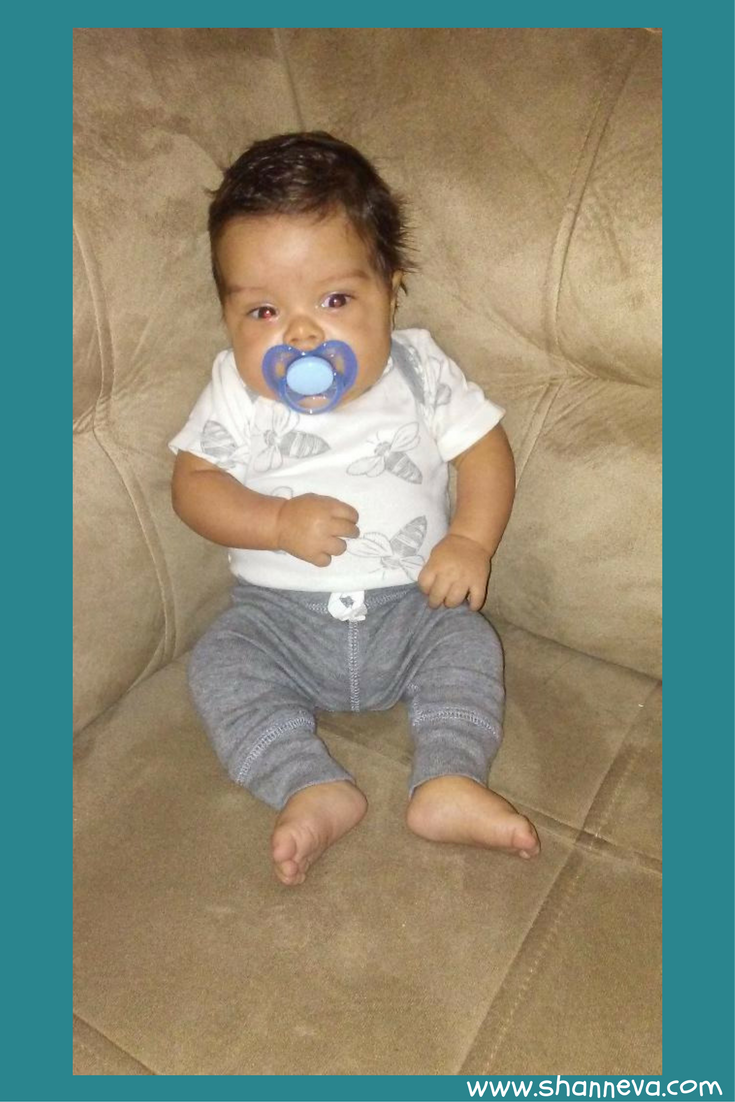 Severide is very adventurous and is also a big brother! (Term 39 weeks born July 26, 2017). Having a preemie first was very nerve-wracking the second time around. I celebrated every week I made and every movement I felt.

Severide is reaching every milestone at his adjusted age, not actual just yet. He has been in early step interventions since February, and it has helped him tremendously. He has started Physical Therapy to help with him walking on the side of his foot. His left foot was very stiff and bent upwards until he was 9 months actual.

Severide will also be starting Speech therapy to help him learn to chew and swallow instead of suck and swallow.

Throughout this journey, I am now going to start school to become a Neonatal Nurse so I can help all the other preemies in need!

The advice I would give another preemie family would be to not lose hope. There will be bad days and good days, but know and understand that the light at the end of the tunnel will always shine. Sometimes, talking with other preemie parents and hearing their stories, whether similar or not, will give you hope as your little one goes through it, regardless of what the doctors say.
It may seem little at the time, but I wish I would have gotten milestone cards and taken pictures when we accomplished them all. You may not know how big they are at the time because of all the other serious problems, but they’re just as big as the rest!
If you don’t know what they mean when you hear all these big words and acronyms, I would ask them to help understand it a bit more. Do your own research on the subject as well. I learned a lot by it. When someone comes to me with questions and concerns, I have been able to pass my knowledge forward.
I honestly believe the best place to go and get some support would be other preemie families. Whether it be within your NICU, or a support group in the hospital, or on social media. Those are the parents that will truly understand you, and understand what you’re going through. They know how important every crucial moment is.
I’ve made some great preemie friends on this journey! They understand me. We have the same thing in common, a preemie miracle! 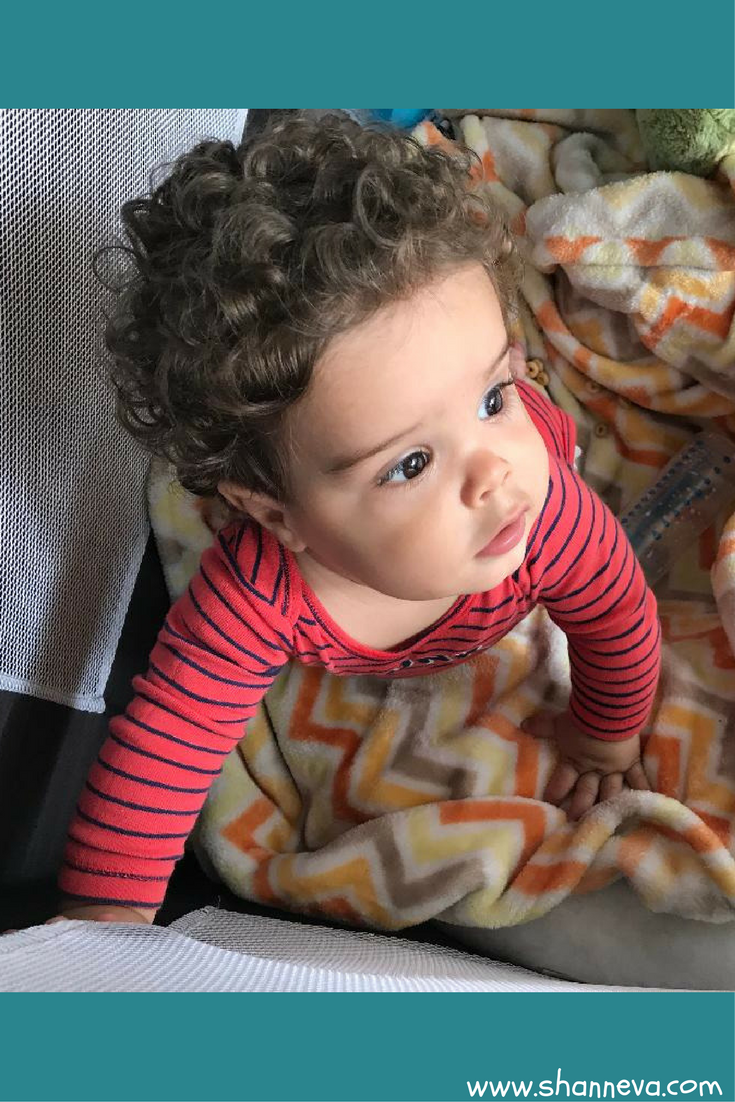 Thank you so much to Daniella for sharing sweet Severide with us. She gave us some great advice.
Please leave any supportive comments or questions below.