Since the twins were born so early, from 18 months until 3 years old, they attended a developmental assessment clinic called Stepping Stones.  They wanted to look at their physical skills, like walking and climbing, as well as their fine motor skills and cognition.

Today, I wanted to go back and share their first visit with you.

About a year and a half ago…

Of course we were running late to our first developmental assessment.  And there was no parking.  Perfect.

I called my husband, who was meeting us there, and had him come get the boys. I then circled and circled and circled some more until I finally found a spot.  Ugh.  Not fun when you are stressed from running late, worried about your babies, and nervous about heading back into the hospital where your babies spent the first 3 months of their lives.

I ran down the hallway, a security guard buzzed me thru the NICU (since he realized this running crazy woman must be the mother of the twins that just came in,) and got to the waiting room where the boys were walking around wide-eyed.  As you know, we don’t get out often, so being let loose in a strange place that has tons of toys was amazing for them.  I must have looked panicked because my husband immediately told me all the toys had been washed down, and the floors too.  I knew we were the first appointment, but as the constant worrier, he knew to ease my mind.

After doing a little paperwork (do your boys say words beginning with b, d, c, and s? Ummm…maybe in their own language?) the Physical Therapist (PT) came in.  She said she liked to watch them play because that’s when she can tell the most.  She thought they were looking good, then the Occupational Therapist (OT) and the Speech Therapist came in.  They were going to take one boy, and the physical therapist would continue in her room with the other.

Not only do we not get out much, but the boys are rarely separated.  Even though they are not in the same cribs, they share a room, so they nap together and go to bed together.  When I put one in his crib, then go grab the other, crying always ensues.  I don’t know if it’s really because they miss each other, but more likely that they don’t want to miss out on the fun that the other is obviously having not being in a crib.  They also eat in high chairs right next to each other, and they play together (not always nicely or even the same thing, but in the same area.) So, this was pretty strange for them. 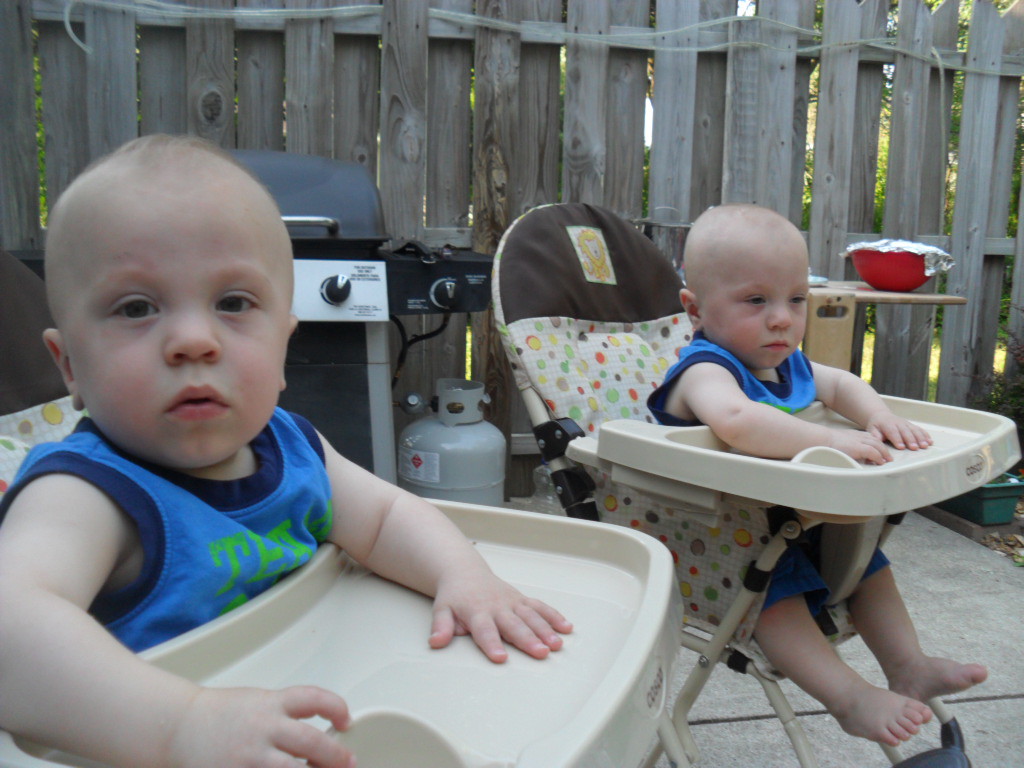 The OT tried to coax my little guy out of the room, but he kept looking back at his brother like, “Hey, come on!” Finally Dad joined in, and he started down the hallway.  My bigger guy immediately started to follow…except the PT room was down a different hallway.  He just kept looking the direction his brother went.  When we finally got him to the room, he kept going to the closed door.

I have to admit, it was pretty emotional.  My boys are not very affectionate towards one another.  They are boys after all.  But, this really made my heart happy to know that they really do have a bond.  I know it will just get stronger as they grow. 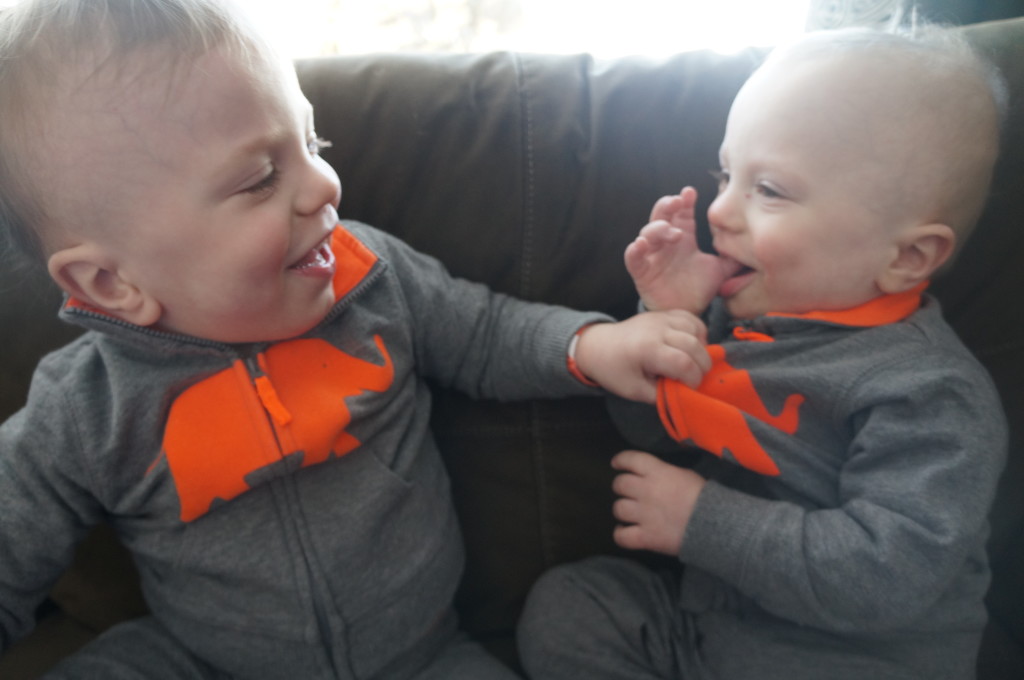 Overall, both boys did good.  No additional therapy needed at this time, and we don’t have to go back to the clinic for another year.  Why am I not jumping up and down screaming with joy from these results?  Well, it’s how they came to those results that just keeps me wondering about the whole process.

As I mentioned, the therapists (physical, occupational, and speech) split the boys up, so they could evaluate them one at a time.  I stayed with my big guy, while my husband went with my little guy.

First, it was time for Physical therapy.  The PT watched as he pushed a big ball around, walked, ran, and played with toys.  She then wanted to see him climb stairs.  Hmmmm.  We live in a ranch, and the only stairs lead to the basement, which are gated off.  So, needless to say, he wasn’t sure what to do with stairs.  He wanted to crawl up them, but she wanted him to walk and hold her hand or the wall to balance.  This did not make him happy.  After a few tries, though, he did get the hang of it.  He did, however, want to either be lifted off the top or jump off.  My little lazy daredevil.

There was then a joyous reunion in the hallway, as my little guy was waiting for my big guy to come out of the room.  They ran around each other, spoke a little “twin” language, then we had to separate them for the next round.

Next, my big guy had OT and speech.  There were four women in the room, the therapists, then a fellow and a student.  They had my son sit in a chair in the middle of the room in front of a table.  To say he was freaked out would have been an understatement.  How would you like 4 strangers staring at you and expecting you to do things you’ve never done all while being judged?  Yeah, me neither.  He is usually the big talker of the two, but he hardly said anything.  I sat next to him on the floor to make him feel a little more comfortable, then the OT and the Student took turns asking him to do things, respond to things, or say things.

They set out 4 items…a comb, a baby doll, a spoon, and a plastic glass.  They then asked him to show them which was the baby.  They asked him to comb the baby’s hair, then use the spoon, and the glass.

Here’s my problem with this part….first, he’s a boy.  We don’t have any “baby” dolls that they play with, so how would he recognize one?  He did point to his own ear when she asked him where the baby’s ear was, which I thought was pretty good.  Luckily, we had been playing with a comb last week, so he did recognize that.  I would like to point out, though, a comb isn’t really a baby toy nor something we would have had around since they hardly have any hair, but I happened to be combing coconut oil thru my other twins’ hair to get rid of cradle cap that has come back.  The medal spoon and clear  plastic cup aren’t anything they are used to either…we use brightly colored baby spoons, bottles, and sippy cups.  He did know how to use them anyways, so Ha!

My point on the whole standardized developmental testing is, while it may be useful to get an overall picture of development, there are many areas in which I don’t think any baby’s whole potential is seen.  If my first full-term child had been tested this way, would he have scored any differently?  Or would he have needed some sort of therapy? I’m not sure.  I do know that he would have been just as freaked out, and probably wouldn’t have said a word.  Now, don’t get me wrong, I am completely in favor of early intervention to help with physical development or if there is a glaring cognition problem that affects a child’s eating or communication methods.  BUT, as we all know, every child develops in their own time and in their own way.  I’m happy to have another set of eyes looking at my babies’ development, but I’m also glad this clinic trusts that I know my babies, and don’t have any concerns. 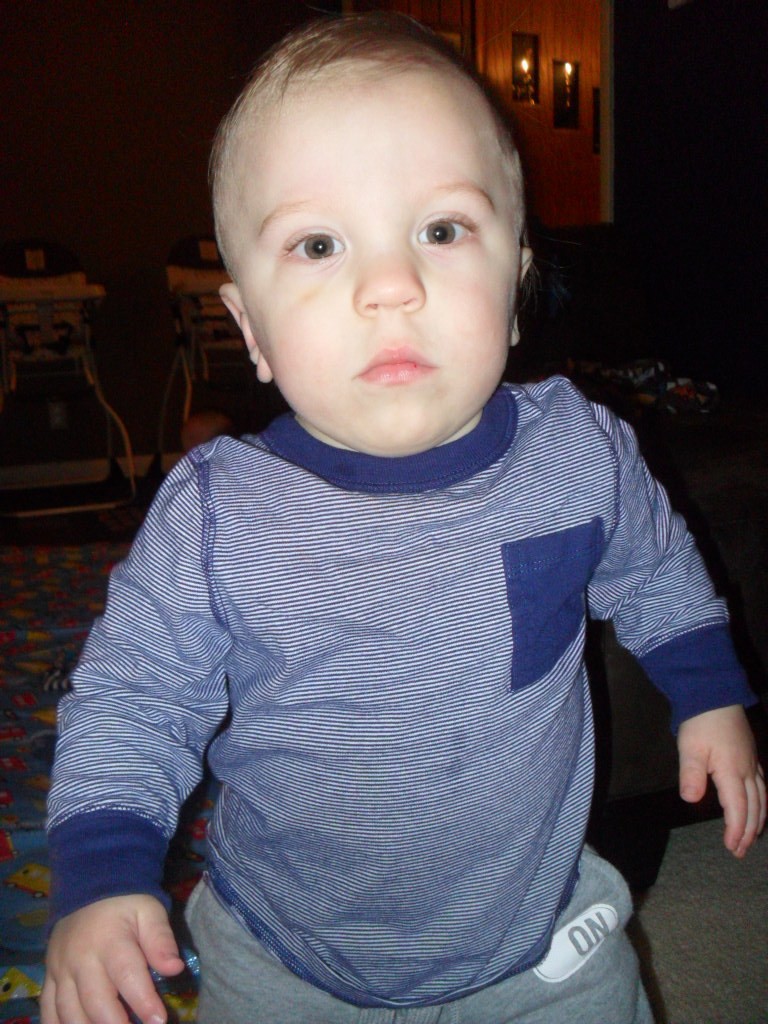 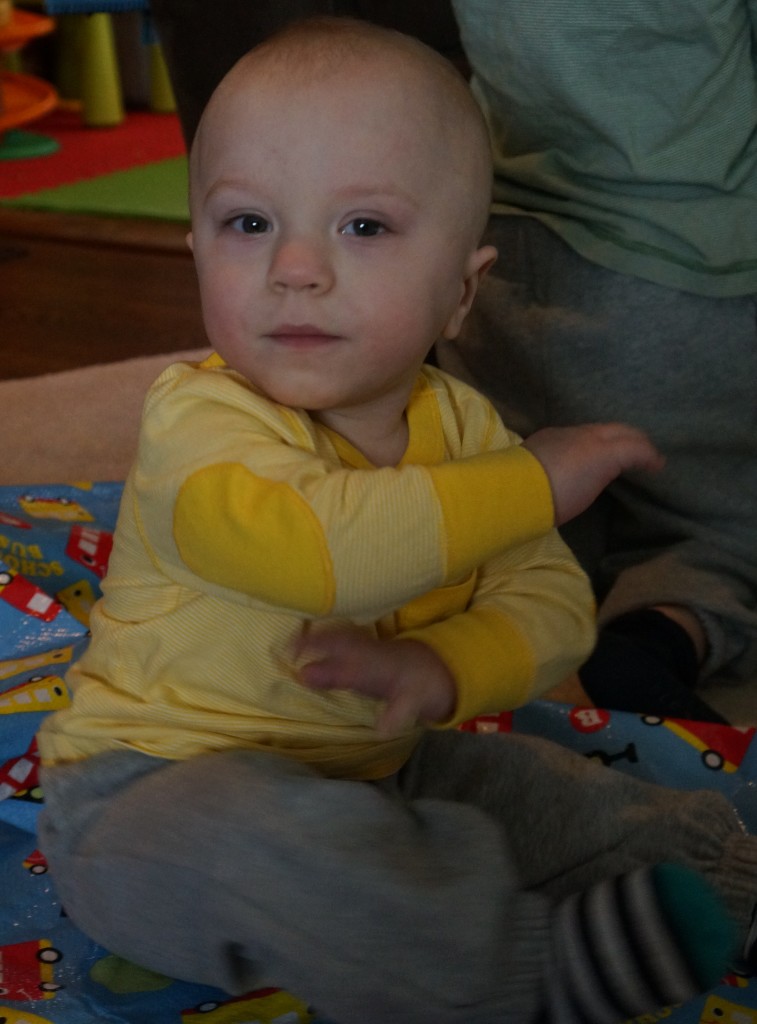 I’ve saved the best news for last.  At the end of the clinic, all of the specialists got together, along with the nurse and Neonatologist (who happened to be the doctor that was their for my babies’ delivery.)  He asked if I had any health concerns, to which I asked, “Is there anything I should be concerned with from their time in the NICU? ”  He said, “No.  There are no lasting effects from their prematurity.  They are doing great.”