Even though we are being careful and socially distancing as much as possible, we had to get out of town. We’ve all been together in the same house since March and were going a little stir crazy. It’s also around this time of year that we take some sort of family vacation. From Vegas and Minneapolis to St. Louis and Chicago, we try to take a family trip right before school starts. So for a sense of normalcy, and to have some much needed fun, we headed to Door County. 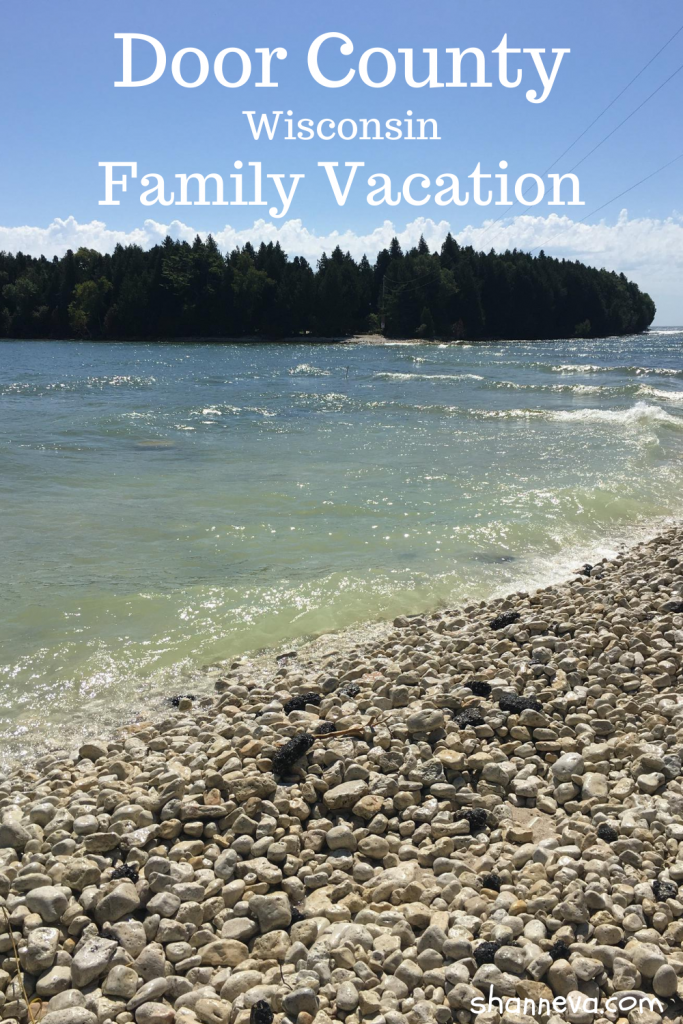 At just about a two hour drive from Milwaukee, Door County is filled with delicious food, adorable boutiques, gorgeous natural wonders, and entertainment for the kids. It’s comprised of a bunch of small cities and town in a Peninsula, surrounded by Lake Michigan near Green Bay, WI. Even though we weren’t able to take advantage of everything, we made the most of our time and stayed safe.

I was definitely a little nervous about traveling during COVID. As I mentioned, we haven’t gone anywhere since March. Yes, my husband has been working, but we haven’t been to a restaurant, and the kids haven’t been inside anyplace. So, I wanted to make sure I did my research to make our trip as safe as possible.

The hotel was the most important part, as that is where we would be spending a significant amount of time. We figured we’d be driving around a lot, so the location in Door County didn’t really matter. I found a place in Sturgeon Bay, which is at the beginning of the peninsula. They had a solid COVID plan in place, including a comprehensive cleaning plan, with social distancing in public areas, including the pool. I also looked for an open outdoor pool and a kitchen in the room.

I also got a lot of recommendations from a friend that had taken a family trip, and looked online to see which places were open and what their policies were.

Then, I stocked up on sanitizer, wipes, and Lysol spray.

When we arrived, as per instruction, just I went in to check us in. They had a partition between me and the clerk, and we were both wearing our masks. Our room was on the first floor, so no need to take an elevator, and there was an outside door close to our room.

The room itself was amazing! Two bedrooms, a dining area, small kitchen, and two full bathrooms. Plus, there was a giant bathtub! 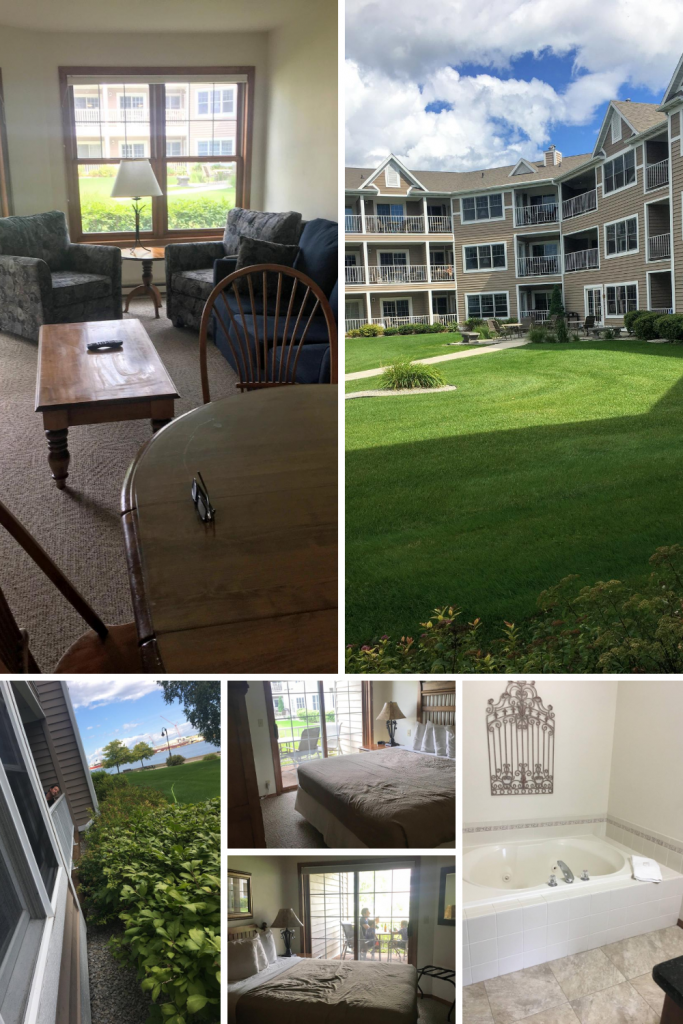 Just so you’re not completely overcome with jealousy, my husband and I did not get a room to ourselves. Instead, we alternated with the boys. My husband got the bigger bed and two of them, that lucky guy. Ha!

Before I got the rest of the family, I wiped down every door handle, light switch, and TV remote. Did I tell you there were three TV’s!!! Plus, I wiped down that giant tub. There were also two balconies overlooking the water. Lysol spray was used on all soft surfaces, including the couch and beds. It was probably overkill, but you can never be so sure in these crazy times.

The hotel had fogged the room, then it was cleaned, and fogged again after housekeeping left. While we were there, we would have no one else come in our room. Instead, there was a laundry basket for dirty towels and to request shampoo, coffee, etc.

Both the indoor and outdoor pools required wristbands, so they could keep track of capacity, which was cut in half. The front desk gave out fresh towels with the wristbands.

We brought lots of snacks and drinks, but knew that we’d be outing out during our vacation. Outside was the preferred option. Of the 5 days we were gone, we only ate inside one restaurant because there was a very long wait for outside and sometimes you have to pick your battles. That restaurant was well spaced, we were near the front door, and two doors opening to the patio were also open.

I always brought Wet Ones for everyone to wipe their hands immediately before eating.

We had some amazing food in Door County! Door County is famous for their fish boils, cherries, and wineries. Since not all of us our fish fans and many boils were cancelled, the first was out. Wineries and kids are also not such a great combo, so cherries were a must.

Andy did try a fish chowder when we ate in Egg Harbor at a place called Shipwrecked Brew Pub. I got a cherry cider (YUM!) and the kids got burgers and fries. They were so excited to color on menus again!

Next, we had pizza at a place called Sonny’s, which was walking distance from our hotel. They served delicious pepperoni pizza with thick crust and a great view of the water. We also had a thin crust pizza a few days later at Wild Tomato, which was recommended by my friend. So good! They have two locations, Fish Creek and Sister Bay, where we ate. 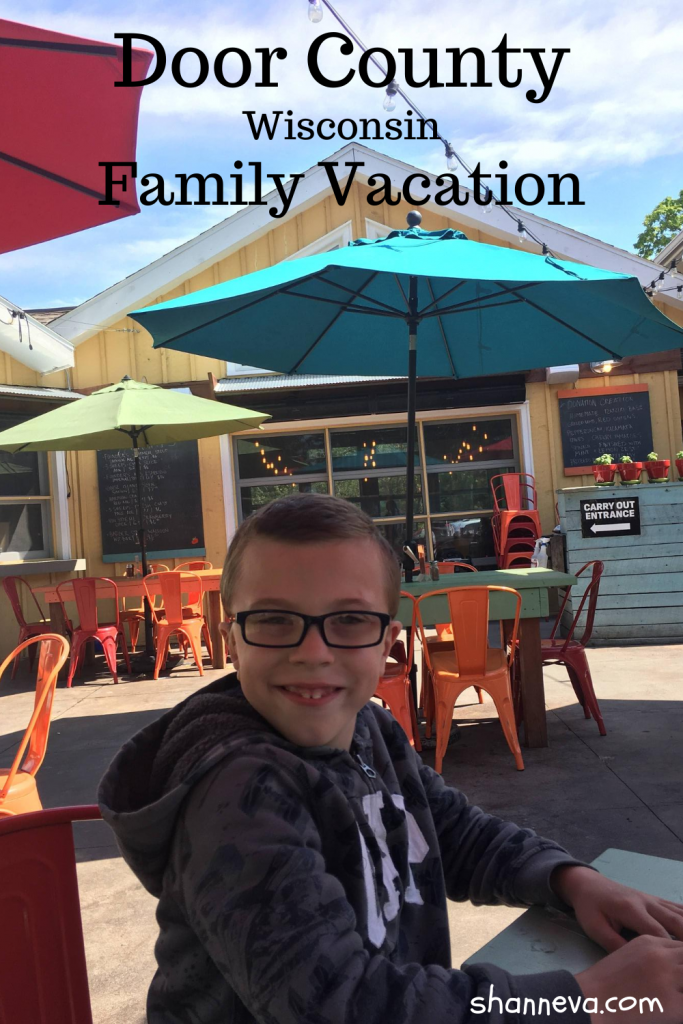 Finally, there was the famous Al Johnson’s Swedish Restaurant. They have actual goats on the roof! We didn’t eat a meal, but instead got Swedish themed drinks on their patio. 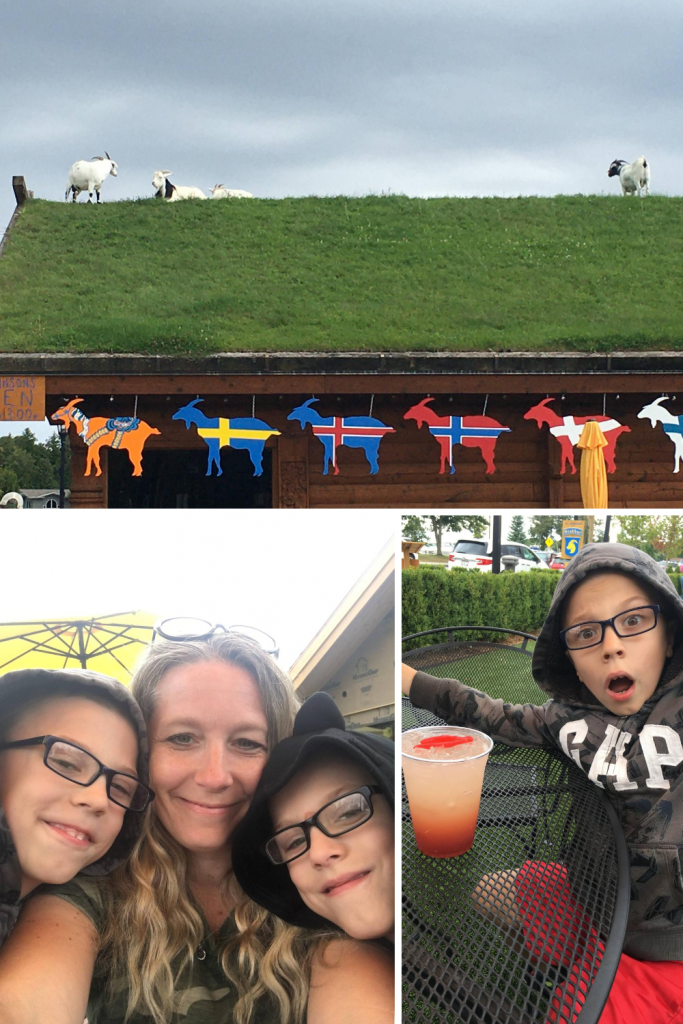 We also ate outside for breakfast in Bailey’s Harbor, got takeout in Fish Creek, and ice cream (and candy) at Door County Candy. You can’t leave Door County without fudge! Bonus points if you remember candy cigarettes. 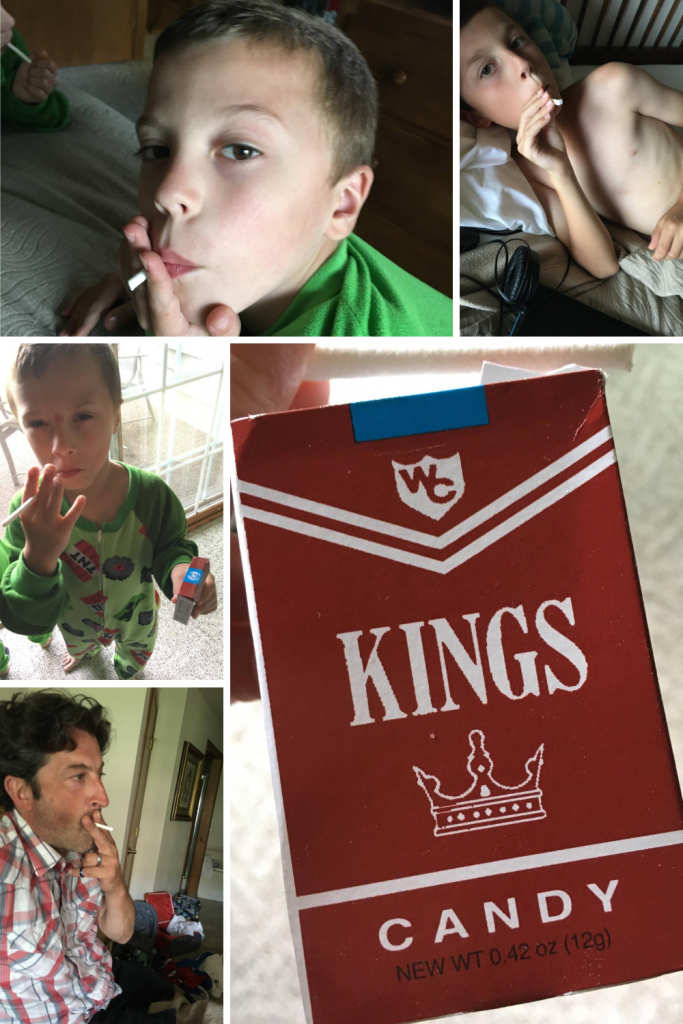 Luckily, we knew the boys were mostly looking forward to swimming at the hotel pool. There are also some beautiful state parks and beaches in Door County. Shopping would have been my choice for entertainment, but with the boys and COVID, I only went in one store for some cherry jam, cherry donuts, and cherry wine.

The hotel pool was really nice and mostly empty. We did go inside to the hot tub, and they had a one family rule.

We got a state park pass, and went into Peninsula State Park. There was a visit to the lighthouse and the beach while we were there. It was a cloudy day, so we thought they would just wade in up to their knees, but you know boys.

Next up, Cana Island Lighthouse. On days with low tide, you can wade out to the island. If there is a higher tide, they have a tractor that will take you out. Unfortunately, the waves were really high, so the Island and lighthouse were closed completely. However, we skipped rocks and played in the sand, so all was not lost.

Finally, we took advantage of a great social distancing sport…mini golf! There were a few tantrums, but also a few holes in one. No score-keeping allowed!

Plus, we hung out on our balconies, watched a couple Brewer’s games (we don’t have cable at home!) and found a sunflower field.

Even though it wasn’t all action packed, it was a much needed break from everyday life. It was great to have a change of scenery, enjoy the beautiful weather, and eat some new, tasty food, while being safe and socially distant. 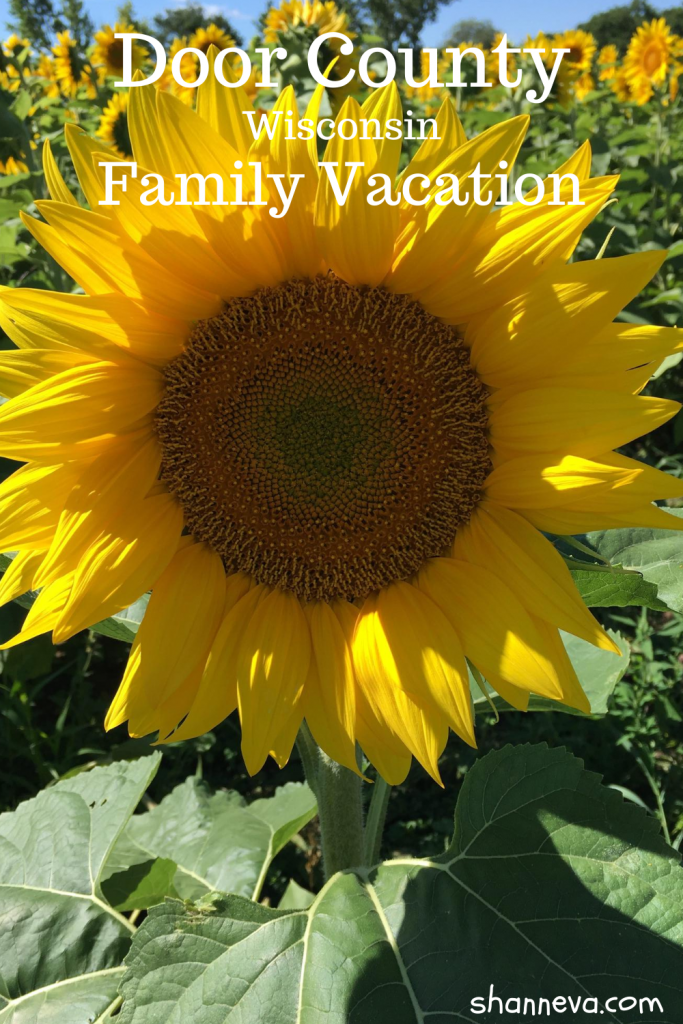 Tell me, have you traveled this summer? Planning any trips soon?