You are here: Home / Blog / The Chicago Adventure, Part 2

It’s finally time for me to share the rest of our Chicago trip with you. If you’ll remember, a few weeks ago, we went on an Adventure to the Shedd Aquarium.

We had so much fun exploring, seeing the special Amphibians Exhibit, and watching the show. We were actually pretty tired by the end of our time there at the Shedd, but we were only in Chicago for one night, so we wanted to make the most of it.

We headed out of the Museum, and straight to Millennium Park. If you’re not familiar with Chicago, it’s a huge park with a tons of art exhibits, a stage for outdoor music, gardens, and a giant silver structure (aka The Bean.) The first part we hit was the giant water fountains that the kids are allowed to run through. 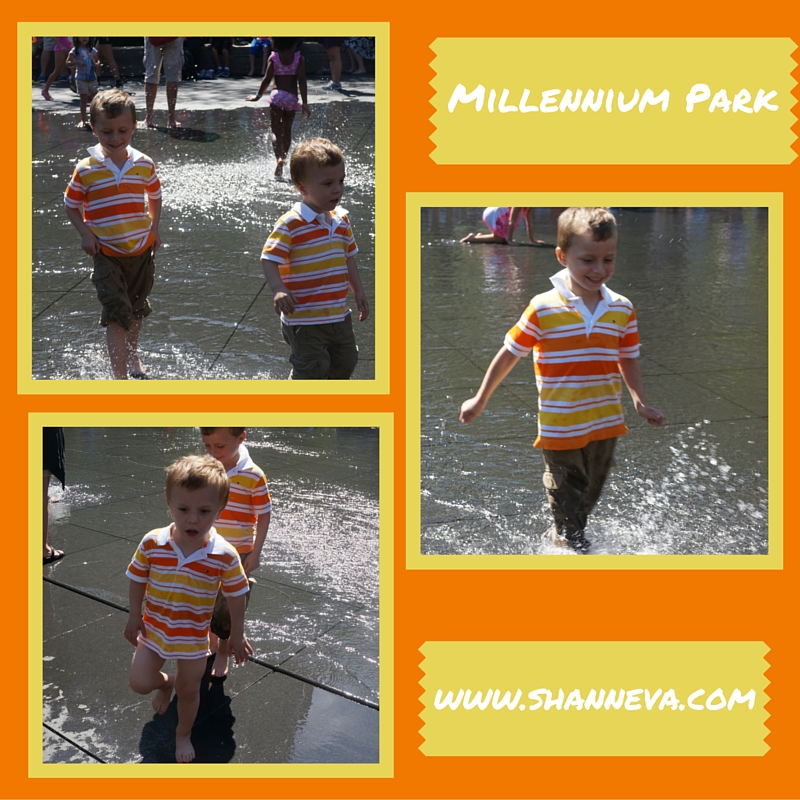 Not only is water coming up through sprinklers in the ground, but there’s two giant walls of water on each side.

The kids had a blast. They took off their shoes, rolled up their pants, and ran around…like all the others of children. Luckily, they were all dressed alike, so we could spot them.

It was really hot and humid, and I almost wanted to go in. Almost.

We then headed up to see “The Bean.” The Bean is a giant silver structure that looks like, well, a Bean.

The Sculpture is actually called Cloud Gate (which I didn’t know until now.) From Wikipedia:  Cloud Gate is a public sculpture by Indian-born British artist Anish Kapoor, that is the centerpiece of AT&T Plaza at Millennium Parkin the Loop community area of Chicago, Illinois.

The kids also had fun with it. They liked touching it, looking at themselves in it, and running around it. 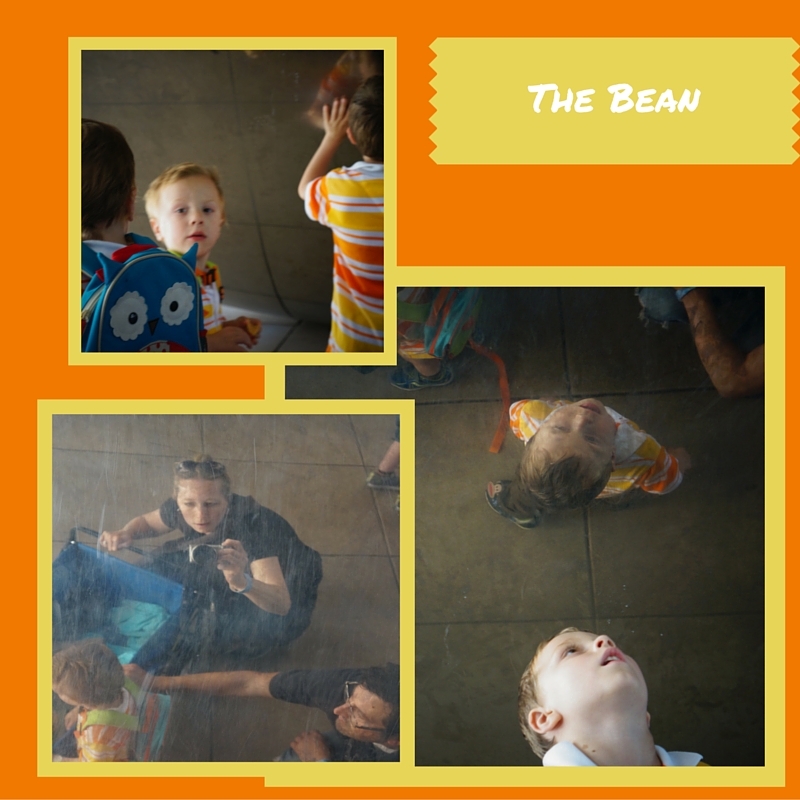 By that time, it was getting late into the afternoon, and everyone was hot and thirsty. We headed back toward our hotel, and stopped to get some lemonade. Luckily, we picked a spot right under the train, so that kept them occupied while we had a little rest. 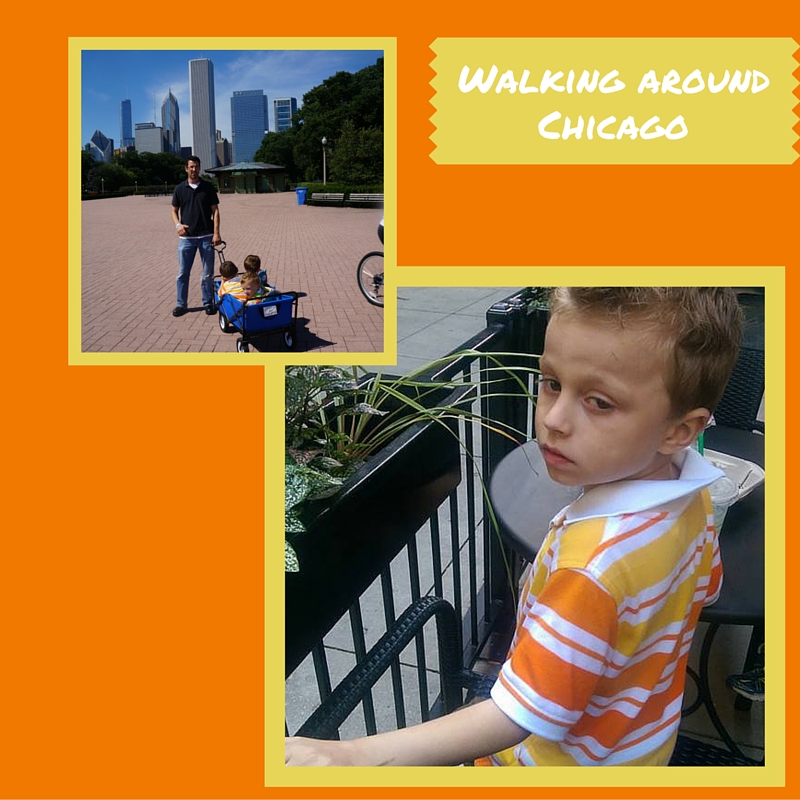 Once at the hotel, I got the kids all changed and into Jammies, propped them up in the bed for a little PBS, and Daddy got ready to do a little work. 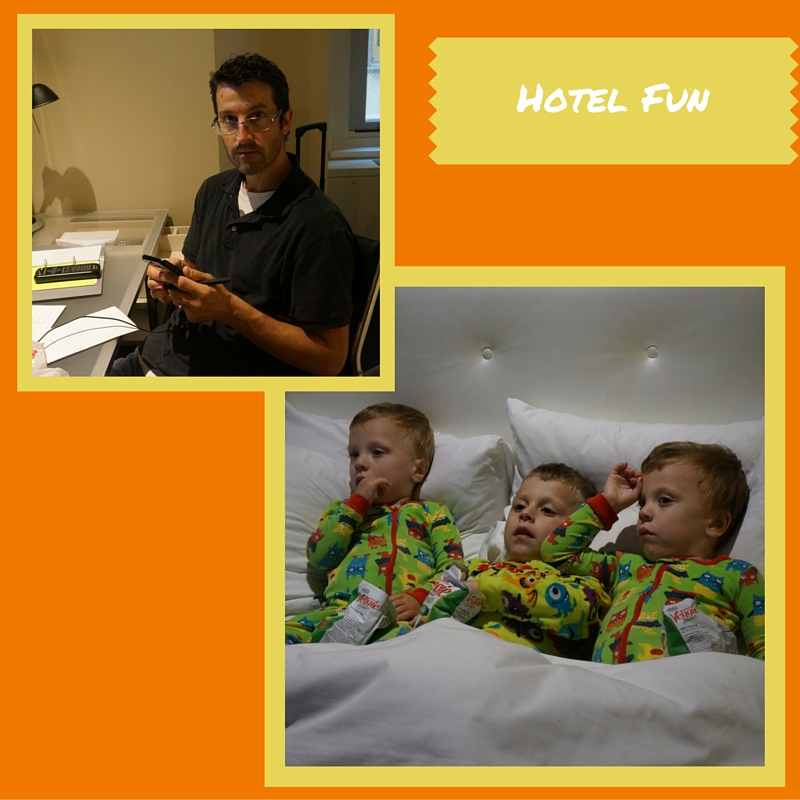 Why isn’t mommy in the picture? Did I forget to mention that Chicago has some of the best shopping and our hotel was located right near one of the best spots?!?!

There are two main areas downtown that are huge shopping destinations. One is Michigan Avenue and the other is State Street. Our hotel happened to be a few blocks from State Street, so after everyone was settled, I went for a little retail therapy.

I also picked up dinner and a few supplies. There’s a Target right downtown!

We all ate, watched some silly game show on TV, then this happened… 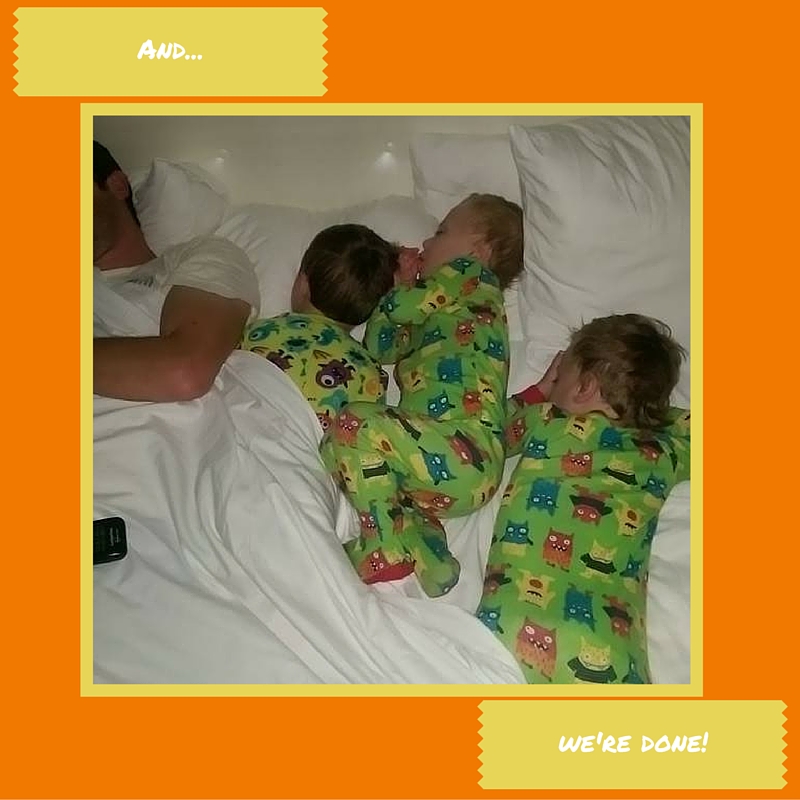 Needless to say, I didn’t get very much sleep and neither did Dad, but the kids all slept great.

They were all up bright and early at 6 am the next morning, so we packed up, and headed out to find breakfast. We ate in a nice outdoor spot where we couldn’t disturb anyone else, then headed to the train station to get home.

We all got seats together on the way home, which was nice…but we were all tired and cranky. Luckily, we got home right in time for nap time….for everyone!

Even though it was a short visit, we really enjoyed our Chicago trip.

Have you been to Chicago? What’s your favorite thing to do while you’re there?