You are here: Home / Blog / Eye Doctor: Should your child be seeing one?

While parents are good about scheduling annual doctor appointments, and even dentist appointments, the eye doctor is sometimes forgotten.

Do children even need to see an eye doctor? Don’t they check their eyes at the regular doctor? Or do that eye chart at school?

The answer definitely depends on the child, family history, and birth circumstances. I’m going to share our experience with the eye doctor and the advice I was given, so you can make your own decision if an eye doctor visit is right for you and your child. You should definitely consult your own doctor or medical professional, as well, since this is only my opinion. 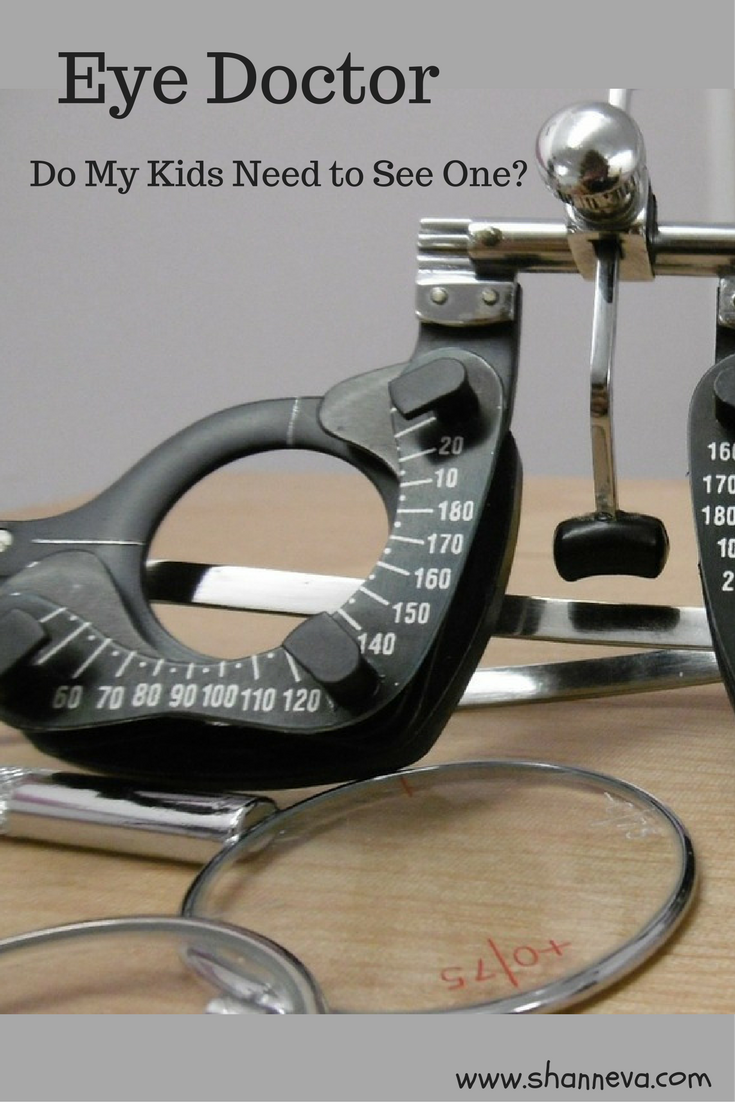 The twins had their annual eye doctor appointment yesterday. They’ve actually been followed by an eye doctor since they were in the NICU, and had to go twice a year for the first two years. The reason behind all these visits is that premature babies can experience eye problems.

One of the biggest problems is ROP, which is Retinopathy of Prematurity. Because preemies are often given oxygen and assistance with breathing, along with their early birth, the blood vessels in their eyes can grow abnormally. It can cause the Retina to detach, which can in turn, cause Blindness. This is actually the reason that Stevie Wonder is blind.

Little P had Stage 3 ROP, which is very advanced, so he had to have laser eye surgery. Big C also had ROP in the beginning stages, but it resolved on its own without surgery. So, both boys needed eye exams.

On the opposite side of the spectrum, Mr. B has never seen an eye doctor. He gets an annual check-up from our family doctor, along with a vision screening at school. I spoke the twins’ eye doctor, and she said that unless I was worried about something in particular, that would be fine for now. If I noticed that he was squinting, rubbing his eyes a lot, or anything else unusual, then I should bring him in for a visit. 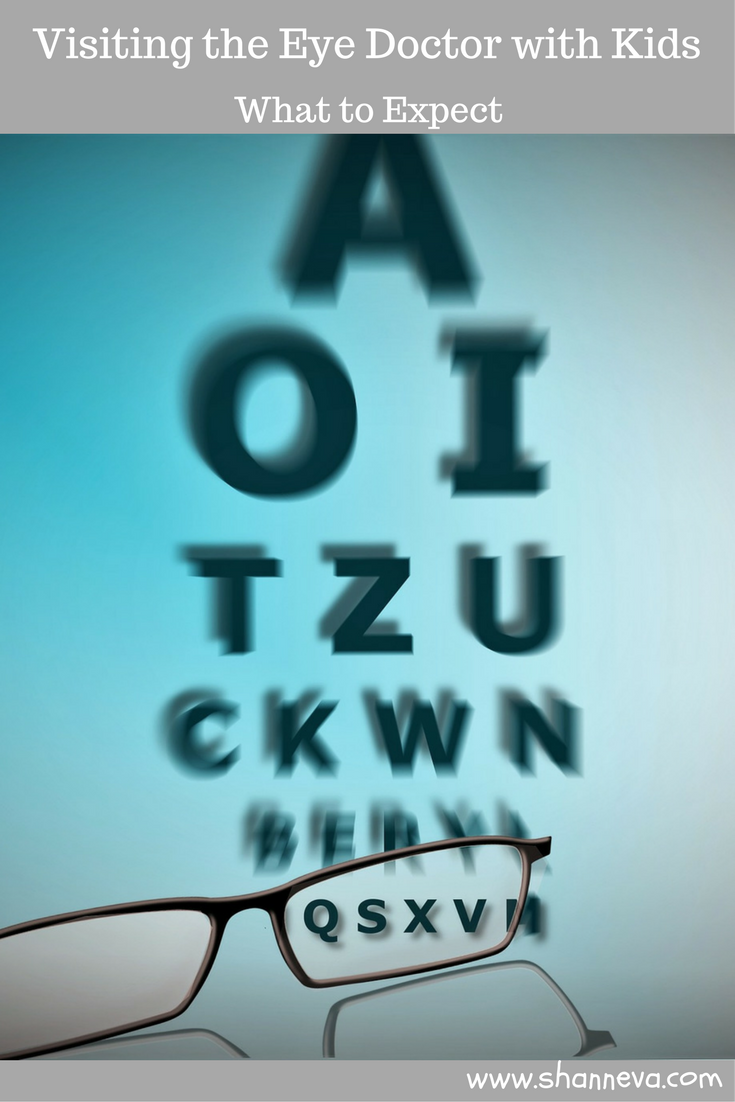 If you have noticed any issues or if your doctor recommends it, I’m going to fill you in on what a typical eye exam would be like for children. We saw a new eye doctor yesterday, so the experience is fresh in my mind. While it wasn’t our first time, it was the first time at a new office with a general eye doctor. We had been seen by a pediatric eye specialist up until now. So, this was more of a “typical” eye doctor visit.

If you don’t have vision insurance, check with the office to see if they offer any type of discounts. Some offer a discount if you pay in cash, for example. Also, if it turns out the eye exam is necessary for a medical reason, such as with the twins, your medical insurance may cover it. I called our insurance company prior to our appointment and found a doctor in network.

Make sure that you are prepared for the amount of time you will spend in the office. Often, the child’s eyes will be dilated, and this can take 20-30 minutes. That is in addition to the exam itself, so you may be at the office for at least an hour or so. Our appointment was at 8 am, and with both kids examined, we were home by 10 am. It was a really efficient office!

One last thing, you may want to prepare your child for what the exam will be like. There is nothing in the exam that will hurt them, although, they may not like the eye drops. The assistant explained to the twins that it feels like someone is splashing water in your eye. With our recent bouts of pink eye, the boys were very familiar with eye drops…and not excited at all!

When we arrived, I filled out a brief health history, and we had a seat. We actually didn’t wait long, and the assistant brought us back.

Before going to the room, we stopped so they could get a scan of each of their eyes.

Since my boys are pretty little, they each took a turn sitting on my lap. They then rested their chin on a small bar, while leaning their forehead on another bar. They had to look into a machine at a picture with each eye, so she could take a scan. Big C was good about sitting still, but I had to hold Little P’s head still.

Next, we headed into the exam room with the assistant.

Each boy took a turn sitting in the exam chair. Little P wanted to sit by himself, while Big C wanted to sit on my lap. Either way was fine for the exam.

It was then time for the eye chart. Since the boys do know their letters, she covered each eye and asked them to name what they could see in the mirror on the opposite wall for nearsightedness. If they wouldn’t have known their letters, they have pictures of objects, like cars, planes, and houses for them to name. She then did the same thing with a small chart she held in her hand to check their farsightedness.

Next, was a test to check for color blindness. She showed them pictures with numbers that were in other colors, and they had to point to the color she asked.

They also looked through special lenses to see what animal jumped out at them. I’m honestly not sure what this tested, but they pointed at all the right animals!

The last thing the assistant did was administer the eye drops. She had another assistant to come in, so the twins could get them at the same time. I held Little P, and my Dad, who was nice enough to accompany us, held Big C. Even though they were dreading the drops, both boys did really well. No screaming or crying!

We then went to the waiting room for their eyes to dilate. The assistant was nice enough to let us walk around the building, and said she would find us when it was time, so off we went to ride the elevator.

About 15 minutes later, the doctor was ready to see us.

She had a different assistant with her to take notes while she did the exam.

This time, both boys wanted to sit on my lap.

She used a very bright light, and had them follow it with their eyes. She also looked through a lense at each eye.

She said both boys were a little nearsighted, which is normal for this age. No glasses needed!

I’ll admit I was a little worried when each boy couldn’t see a few of the smaller letters on the far away test. Not that needing glasses is a bad thing, I just don’t know how I’d keep them on either boy. Or keep the other one from destroying, pulling, pushing them on/off their face.

The eye doctor also said the boys’ eyes both looked healthy, and we wouldn’t need another check for a year. Hooray!

The boys then got to pick out sunglasses. Since their eyes would stay dilated for up to 24 hours (wow!) they would help with the brightness outside on the way home. They also got an eyeball sticker (which glowed in the dark!) and eyeball rings. Their day was made.

Eye exams complete! Since both boys had ROP as preemies, it’s important to get our yearly eye exams. Today, we got a healthy eye report! Hooray! #fightlikeapreemie #nicustrong #healthyeyes #ROP

So, that was it. Pretty painless for both mom and kids (and Grandpa too!)

I hope this gives you a better idea of what happens at the eye doctor for young children, and also helps you decide if you need to make an appointment for your child. Remember, I’m not a doctor, so please consult a medical professional with any questions or concerns.

Have you visited the eye doctor with your children? Did you have a similar experience?