You are here: Home / Blog / Family Pet: Choosing for Our Family

A family pet is a huge decision.

It’s been almost 12 years since we got married, and 11 since we started our family. I brought a cat into our marriage, and Mr. B has been a fish owner for a couple of years, but we got our first family pet this past week. It wasn’t a decision we came to easily or quickly. So, I’m sharing what made our decision and how our family pet ownership is been going so far. 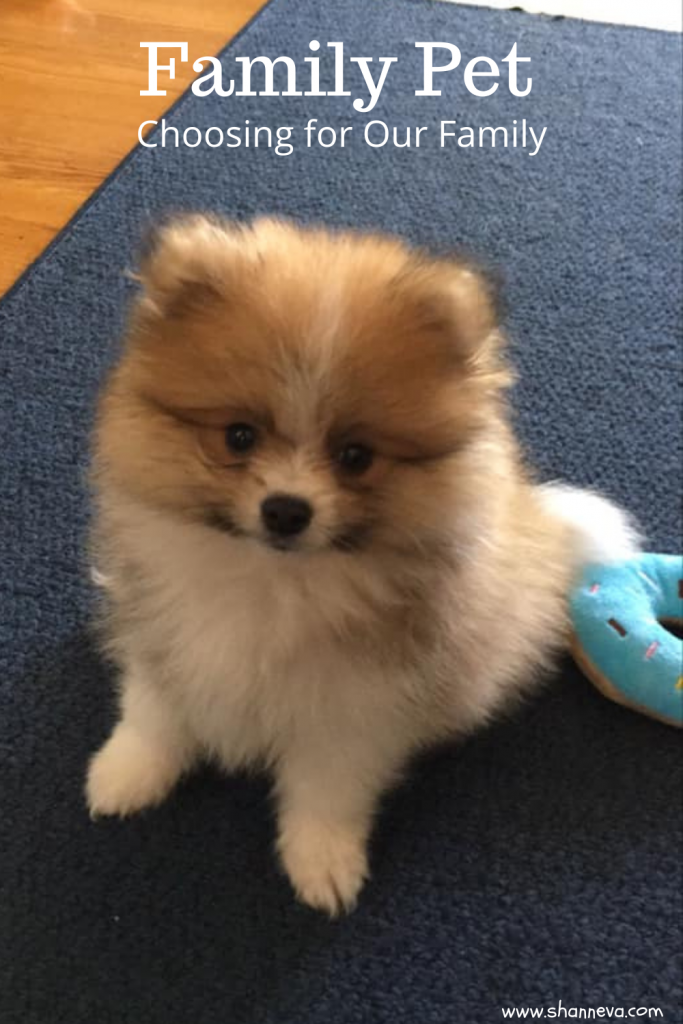 I’ve actually always wanted a dog. When I was growing up, we actually got a beagle for two days, but then took it back to the breeder. My brother and I loved to play with her, but my mom ended up doing all the work. She did not want to do it.

So when I got older, I always thought I’d get a dog. As a single person, I worked, traveled, and lived in apartments not conducive to having one.

We got pregnant after only being married for four months, and babies were enough to keep us very busy. As the boys grew older, Mr. B, especially began to ask for a dog.

For the last year, the requests have gotten more frequent. We’d make him deals about keeping his room clean, but he’d never follow through.

Then, quarantine from COVID hit.

I watched Mr. B struggle with loneliness and it broke my heart. The twins had each other to play with, but Mr. B would cry about missing friends and having someone to play with. The idea of a dog became more real to me.

Now, it was just time to convince my husband.

My husband was of the same mindset as my mom: He did not want to do all (or any) of the work that a dog entails. I knew it would be hard work, but this time I was prepared to do it myself. Plus, Mr. B is almost 11 years old. It’s a great time to learn the responsibility of a pet.

He was also concerned about travel. How could we ever go anywhere again?

Well, in times of Corona, we don’t have any plans to travel soon. By the time we do decide it’s safe to go on a big trip, our family pet will be fully acclimated. It will be easier to decide if we should board, bring with, or have a friend help out.

So, I started working on my husband. I’d drop little hints, and show him some cute puppy pictures. I’m honestly not sure what finally convinced him, but he thought getting Mr. B a puppy for Christmas was a goo idea.

I had other plans.

A good friend of mine posted a picture of her and her mom’s new dogs. They were adorable! I immediately messaged her to find out about them.

She put me in contact with the woman she got them from, but unfortunately, it was too late. She had sold all of her puppies from her latest litter. I got put on the waiting list, and my friend added me to a Facebook page where dogs were often for sale.

I also put in a few applications for adoption from local shelters and watched for foster dogs to become available. It seemed like everyone had the same idea as me, so it was next to impossible to find any dog, let alone a puppy.

My friend encouraged me to message the woman again, and this time her dog just had a litter. There were two boys available! Plus, they would be ready by the end of September/early October. Just in time for Mr. B’s birthday!

I developed a cat allergy after a few years of owning my cat, so I new a cat wasn’t a match for our family. That litter box was the worst for me.

I’m not a big fan of reptiles or rodents, and I don’t really care for Mr. B’s fish. It doesn’t provide any companionship, it’s food stinks, and the tank is a pain to clean.

I figured if we were going to do this family pet, we’d go all the way. Dogs provide companionship and teach responsibility. They may not be easy, but the work would have the rewards of love.

While it didn’t necessarily need to be a puppy, I knew the dog would have to be small.Our house is just big enough for the five of us, so adding a giant furry friend would be too overwhelming. Smaller dogs do not need as much exercise, and even though we are fairly active, not having to go out for mile walks in the freezing Wisconsin weather was appealing.

Finally: Getting the Puppy

After getting pictures of our boy, the breeder told me he would be ready the week of September 21st. It was a two hour drive, so my husband took off that Friday. We planned to surprise the boys when they got home from school. Then, they would have the whole weekend to bond.

Of course, during 2020, nothing goes as planned.

Mr. B came down with a sore throat on Wednesday. I asked the breeder if we could pick up the puppy one day earlier. After taking him to the doctor and getting the diagnosis of just a virus, we planned to instead take him with to get the puppy the next day.

Luckily, he was feeling OK apart from the sore throat. We didn’t tell him where we were going, only we had already planned something while he was supposed to be in school.

When we arrived at the meeting spot, we all walked out of the car together. Mr. B didn’t really understand why he had to come meet some lady, but as soon as he saw her holding some dog food and a traveling case, he got suspicious.

Finally, they met, and we told him this furry guy was all his. 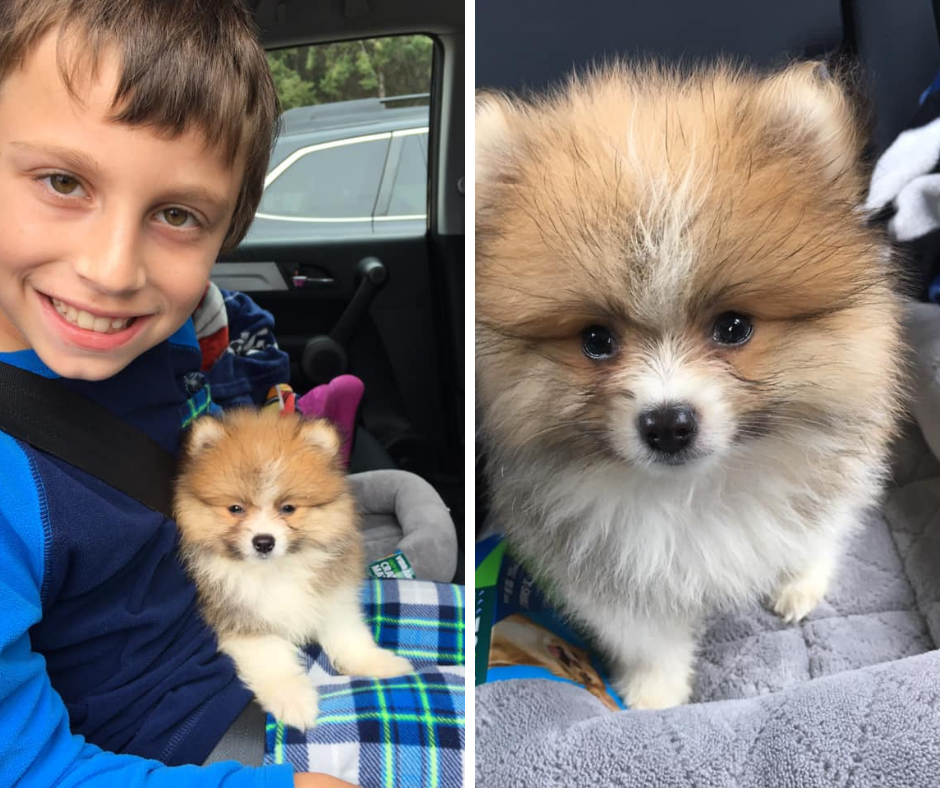 I don’t think he really believed we were keeping him!

Our boy has been home for almost a week. He’s a tiny ball of fur, weighing in at a mere 2lbs. He’s playful, sweet, and affectionate.

It’s definitely been an adjustment, but the boys just love him. Especially Mr. B! They all take turns watching and playing. Mr. B even cleaned up an accident.

I’ve been sleeping on the couch, and they’ve been taking turns on there too. I’m starting to get tired, but I know it won’t last forever. It is still much easier than getting up with a crying baby!

Overall, it’s been a great decision, and we are very smitten with our new guy. 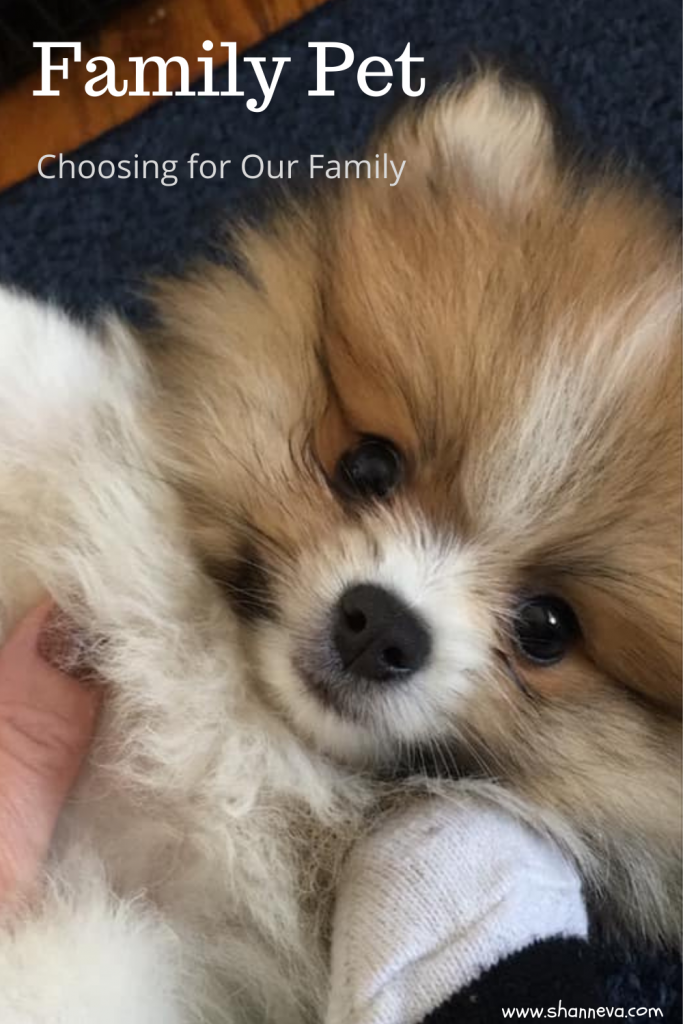 Do you have a family pet?