You are here: Home / Birthdays / Our 3rd NICUversary

Even though August has come to an end, it will always be a special month for us. August 1st and 3rd are particularly special because they are the dates of my boys 3rd “NICUversary.”  What is that crazy made up word you ask?  Well, it’s the anniversary to the dates that my boys came home from the hospital. 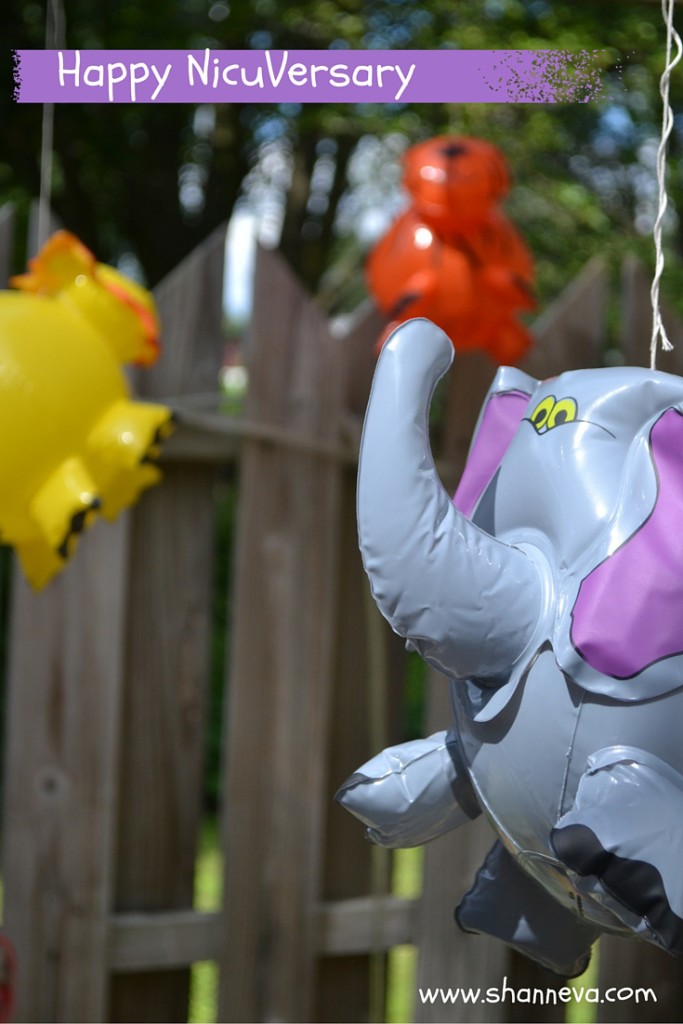 My twins were born at 25 weeks, 5 days, due to Twin to Twin Transfusion Syndrome (TTTS) and Selective Intrauterine Growth Restriction (SIUGR,) both which are conditions/problems with the placenta during a twin pregnancy. To explain these conditions in very simple terms, since my boys are identical, they shared a placenta in the womb. Their share was very unequal, and my smaller twin only had about 10%. Also, the blood vessels connecting them in the placenta did not function correctly, again upsetting the balance of the nutrients they were receiving.

When my smaller twin ran out of nutrition and was going into heart failure, it was time to deliver. Luckily, I had been in the hospital since 24 weeks for constant monitoring. The twins only weighed 1 lb 7 oz and 2 lbs 2 oz at birth, and were very sick, so they had a long journey ahead of them in the Neonatal Intensive Care Unit (NICU.) My bigger guy stayed in the NICU for 91 days, and my little guys was in for 93 days.  It was a long three months, filled with many ups and downs. It really took a physical and mental toll on our entire family. But, we survived! And it’s been 3 years with no re-admittance into the hospital!

To celebrate this year, we’ve decided to take the boys on a special trip.  The first year, however, we threw a big party, and called it their NICUversary party.  I’m going to take you back, and share that special day.

We’re decided to throw a big celebration for the twins to make up for the small first birthday party they had.  I was too nervous to have a lot of people over to celebrate, since their first birthday was right out of cold/flu season at the beginning of May (May 4th to be exact.) Since the twins weren’t really supposed to be born until August, the NICUversary party would be the perfect idea. This way, not only would we celebrate them being 1 years old, but we would also celebrate them being out of the hospital for ONE WHOLE YEAR.

In addition to celebrating, we finally got to catch up with all of our friends!  A lot of the people at the party hadn’t even met the twins yet!  We haven’t been hiding them or anything, but with their prematurity and the severity of cold/flu season, we’ve been keeping them pretty isolated.  Up until now, most of their excursions have consisted of doctor visits or a quick trip to Grandma’s house.  We did take them out to a neighborhood party for the 4th of July, but other than that, this was the most people they’ve seen at one time.

It was a Zoo themed party and I did most of the planning/work myself.  I made collages with their pictures, a “Zoo” sign, and got animal print balloons, streamers, and even a rug.  I also found some super cute zoo animal beach balls to hang from our tree.  The party was from 2pm to 4pm, so I made cupcakes, cookies (well, grandma made them, but I decorated!) and assorted snacks. 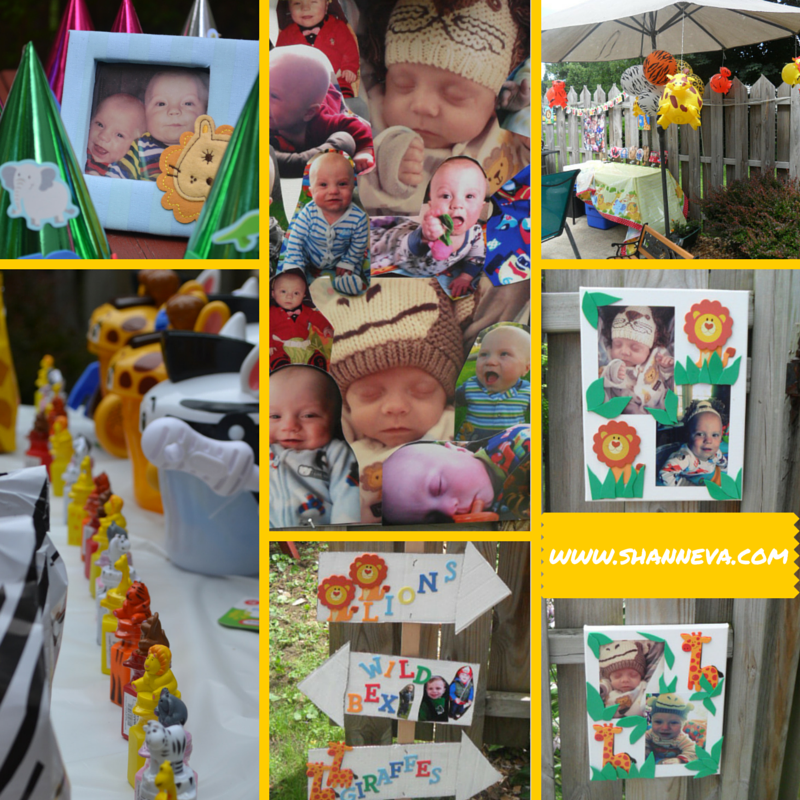 My mom also helped me make a healthy cake for the twins to dig into themselves.  It was banana bread made with whole wheat flour, applesauce instead of oil, and frosted with cinnamon cream cheese.  They seemed to enjoy it!  I don’t think I’ve ever seen my little guy eat so much in one sitting. 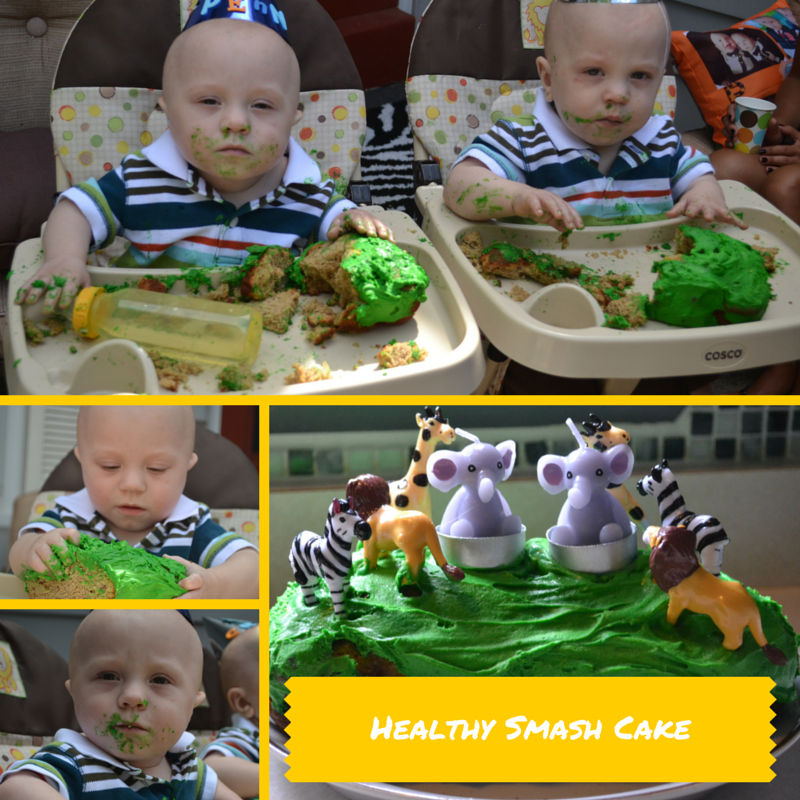 I also found really cute zebra and giraffe sand buckets to give the kids as party favors, along with animal bubbles. 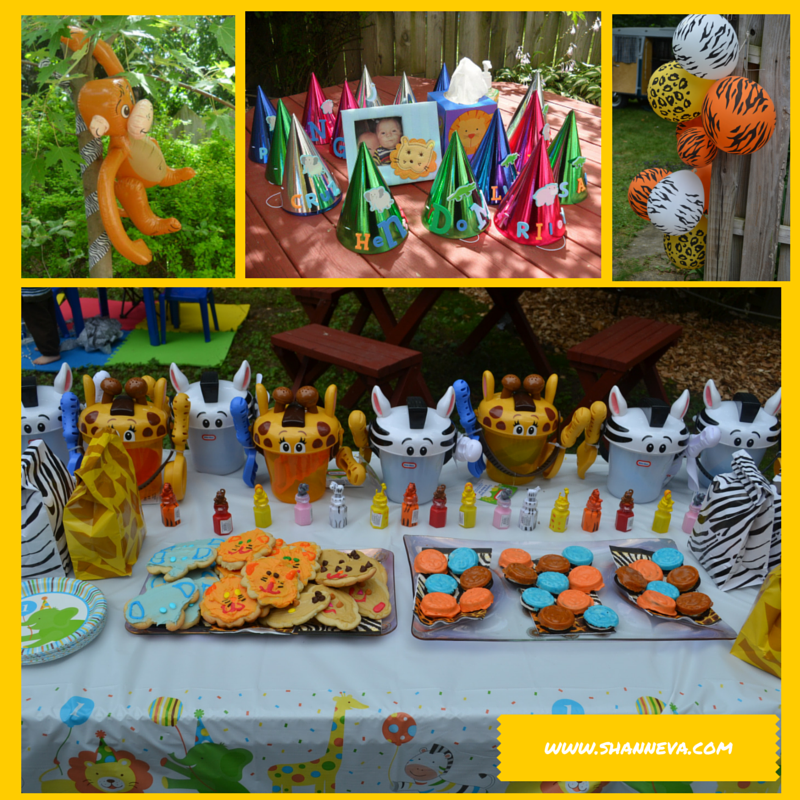 I have to admit that I really enjoyed the planning and decorating.  Maybe when the twins are older, I can try out a little party planning business.  I will NOT, however, be making any of the food for those parties.  Shopping and decorating = FUN  Baking and decorating cupcakes = Big Mess.  I can save money  and find unique decorations like nobody’s business, but baking and making food, not so much.  At least I know my limits!

If you’re interested in any of the products I used, here are the Amazon affiliate links. Just click-through the picture to get to the product. No additional charge to you…just a few pennies for my piggy bank, if you decide to purchase.

The party was just the right amount of time, and I think everyone had a good time.  The twins didn’t cry or fuss at all, and really liked watching all the people.  We had invited many of the people who were really supportive both during my pregnancy and during the twins NICU stay.  It was a really rough patch in our life, and to find people who can stick through that with you is pretty amazing.  We even had one of our primary NICU nurses come to the party.  She was still able to tell the twins apart!

We didn’t open presents at the party because it was such a short time, and we wanted to spend it visiting with everyone.  It actually worked out really well because it gave us something to look forward to on Sunday.  Everyone was really generous and thoughtful, and many of the cards brought tears to my eyes.  We have some really special friends that stuck with us through a very difficult time.

We look forward to celebrating their NICUversary every year, even if it’s not with a huge party like this.