After hitting Bay Beach and meeting Thomas the Train, we decided to make one more stop before heading home.  We decided to stop and stay in Sheboygan, WI.  It was on the way, and then we’d only have about an hour drive home the next day.

My husband grew up in Sheboygan, so he already had some ideas in mind for activities.  I’d been there once before, but it was 6 years ago.  I was pregnant with our oldest, and we went to the John Michael Kohler Art Museum.  It was a beautiful museum, but I wasn’t feeling so hot, so that’s all we got to see. 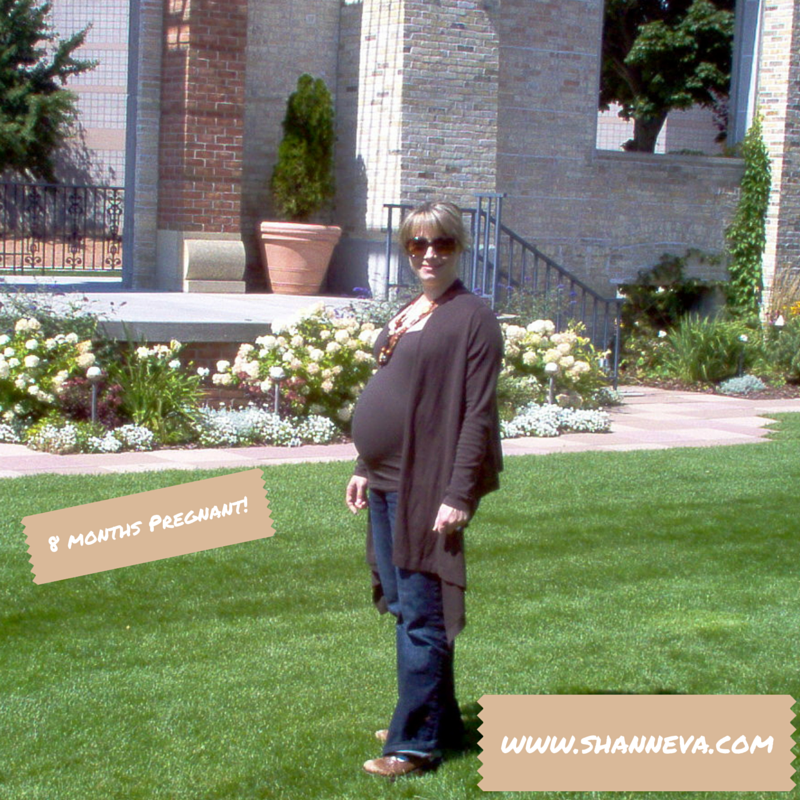 This trip, we were going to go eat, go check-in to our hotel, walk along the waterfront, eat again, and visit the beach.  We also planned to drive through my husband’s old neighborhood to show the boys where he grew up. Most of it went according to plan.  With our boys, you never know.

Sheboygan is really a beautiful city.  It’s located right on Lake Michigan.  It took us less than an hour to get there from Green Bay, WI, which is 55 miles North, and Milwaukee,WI is just another hour South.

We found a restaurant right on the Harbor, so we got a table outside.  While waiting for our food, the boys were able to walk along the boardwalk, and I just got to relax for a second.  It was wonderful.

Our food came, the boys ate a little, drank a lot of lemonade, then we were ready to get to the hotel. 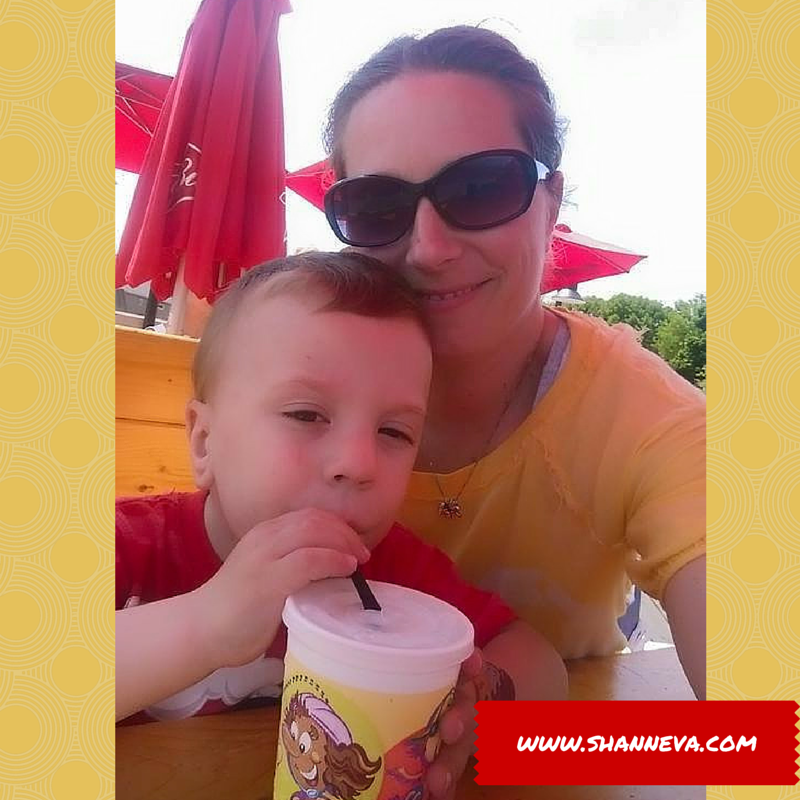 The waitress also mentioned an ice cream parlor along the boardwalk, so after dropping off our stuff and checking out the room, we headed to get ice cream.

The shop was really cute.  It was like an old-fashioned soda shop, complete with a train running on a track near the ceiling. The boys were pretty excited to get some ice cream…until they saw the giant Lollipops. Of course, this was after we already got them ice cream.  Oh well.  It’s vacation, right? 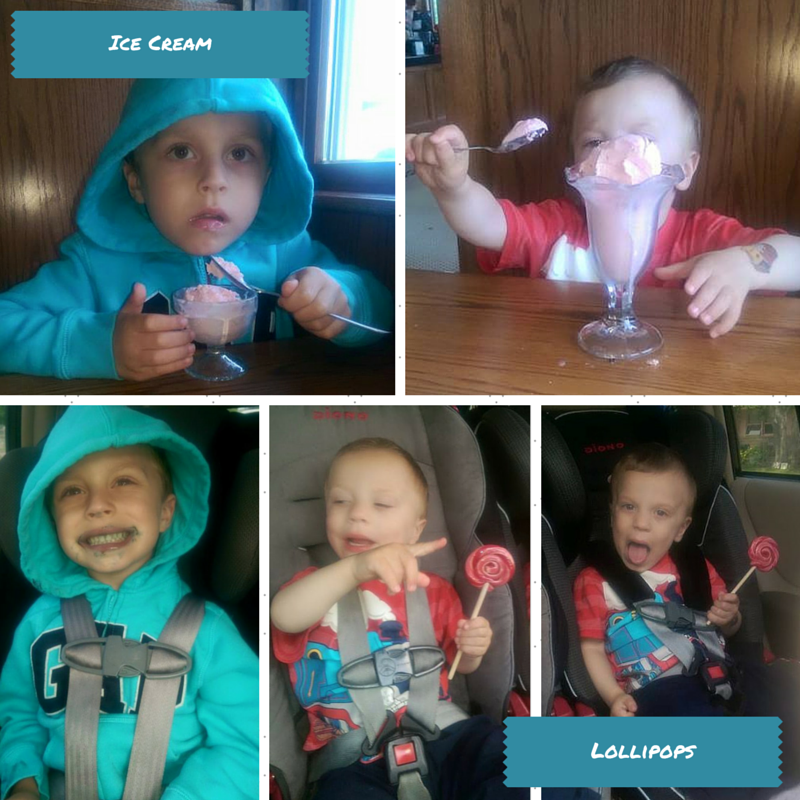 So, I caved to the screaming, and we piled in the car with Lollipops.  We then took a drive to see where my husband grew up.  We got to see his old house, his elementary school, and there was even a tree swing he remembered.

The kids finished their lollipops and were so sticky, we had to clean up.  We then took out the wagon, and once again walked along the boardwalk and peer.  It was such a beautiful day.

By the time we finished, it was time to eat again.  My husband called an old high school friend to meet us for dinner, but the combination of no naps and a lot of sugar did not bode well.  Needless to say, I spent most of the dinner out in the car with a screaming twin.

Early to bed for everyone!

The next morning, we took advantage of the free continental breakfast at our hotel, then headed to Kohler-Andrea State Park.  We ended up buying a season pass for the State Parks because we figured it would give us a good excuse to visit another one soon.  Plus, a season pass for a resident is only $25. 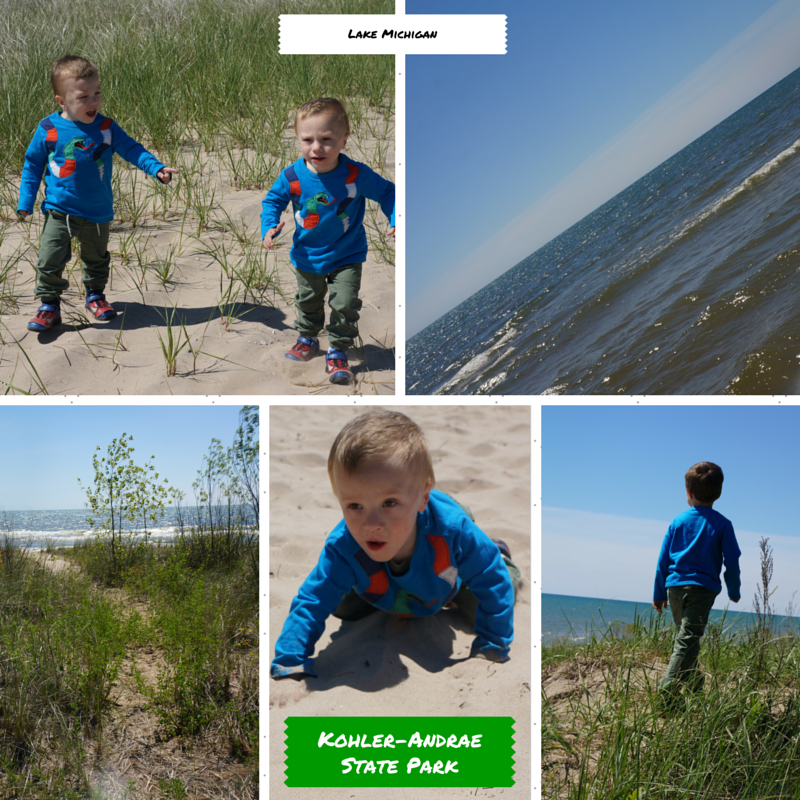 It was really beautiful. There are two beaches, plus trees surrounding everything.  There were sand dunes for the kids to climb…and jump off of.  Plus, when we first arrived, we had the whole beach to ourselves.

And yes, we are wearing long sleeves.  In the end of June.  It’s Wisconsin, after all. 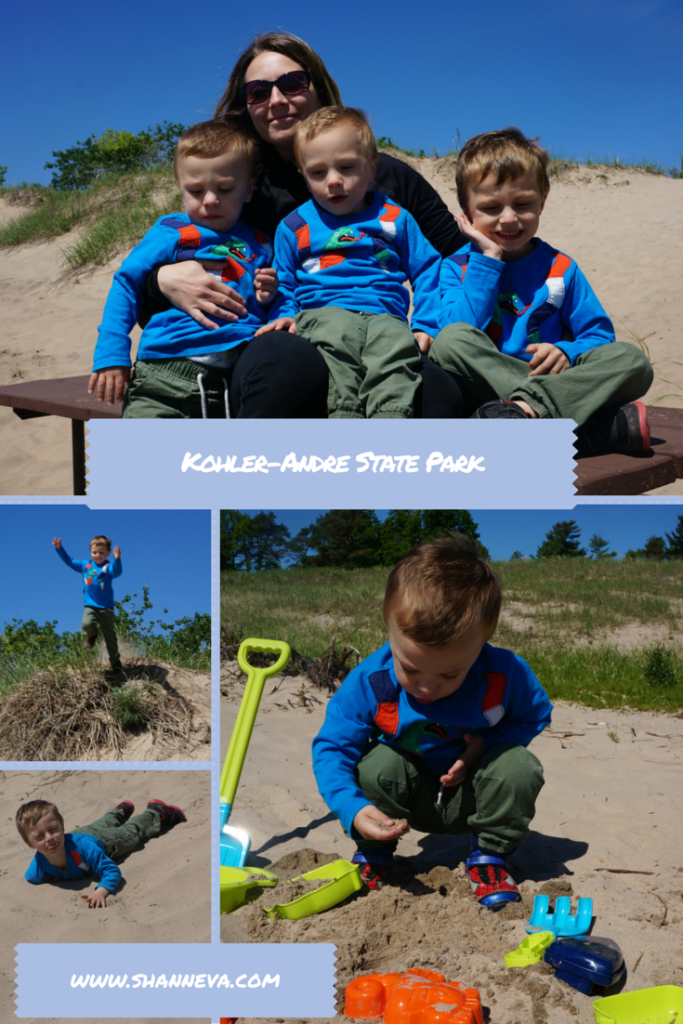 It was too cold to go in the water, plus the tide was very high.  We had a lot of fun just digging in the sand, and running around.  Into the park a little ways near the campgrounds, there was a playground.  The kids got to run, slide, and burn off some energy before we decided to head home.

Full of sand and great memories, we really had a fun road trip!