You are here: Home / Blog / Separate Classrooms, Pros and Cons for our twins

It was a hard decision, but we decided on separate classrooms for the twins this year. Even though it is only preschool, it’s still their first time in a classroom-type setting. We wanted them to have the best experience, and we also wanted to prepare them for kindergarten.

Everyone seems to have an opinion when it comes to what to do with twins for school, but this was our decision. It may not be right for everyone or every set of twins, but I’ve put together a list of pros and cons from our experience so far. I’m hoping it will help other families, and also help us make a decision for kindergarten next year. 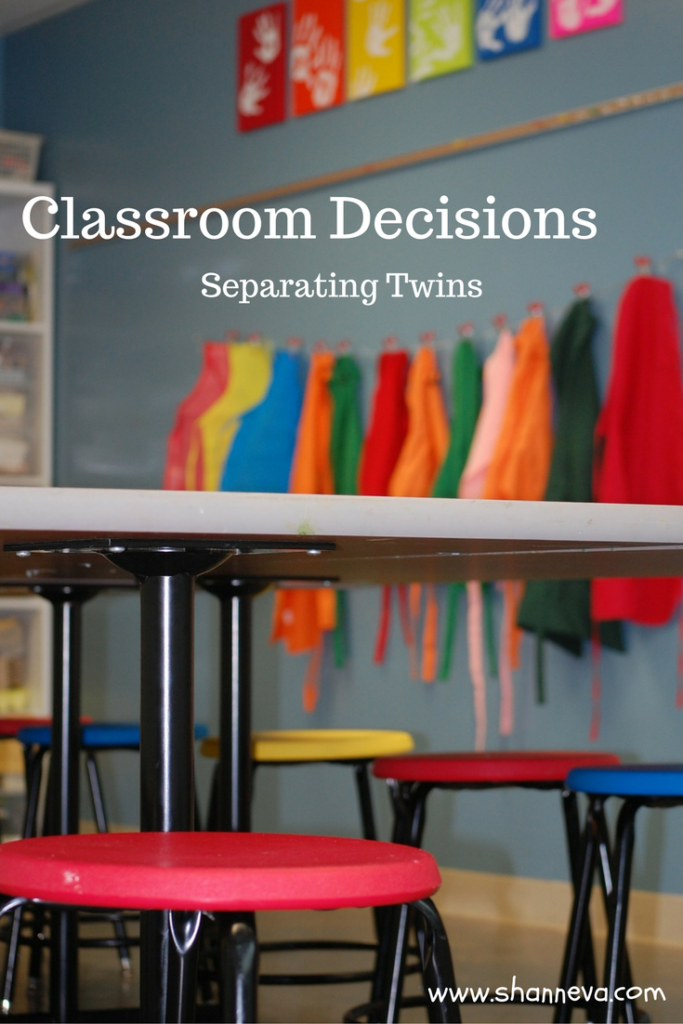 So, how did we come to the decision to put the twins in separate classrooms?

Well, we talked about it a lot. We also asked the twins what they would like to do. One wanted to be in his own, and one wanted to be with the entire family. Sorry, kid. That’s not happening. But, it was a cute answer.

We finally decided on separate classrooms for 2 reasons.

The first reason is that Big C is more dominant. Every time we’re reading a story or I ask a question, he always answers. He doesn’t let Little P take a turn. I know that waiting your turn and raising your hand before speaking is something they will eventually learn in school, but it’s not something they entirely understand yet.

The second reason is they are always together. They sleep in the same room, they play together at home, they go to childcare at the gym together, they eat together, watch the same shows…you can see where this is going. They’ve never been apart for more than an hour or two since the NICU. I’ve taken one to the store with me on a very rare occasion, and I also took one to the Urgent Care alone, but that’s about it.

We wanted to give them a chance to be by themselves and see what it’s like. Let them make their own friends, explore and play on their own, and have a few different experiences. Preschool is only a couple of times a week, so if they don’t like it, they can spend every other second of the week together.

So far, the twins have been loving preschool and their teachers. Here’s all the good stuff that has happened so far:

There are a few things that came up that we didn’t really think about before separating them. They are not all necessarily bad, but it gives us something to think about for next year.

Things to Think About

We have had some tough days, though. The first couple days, especially, they got very upset when they didn’t each make the same art project. One also got a birthday treat that the other didn’t get. He did share with his brother, though! Progress!

The other big obstacle was the field trip. Only one classroom was going, so I made the decision to not let Little P go with his class. I thought that might be too hard for them to understand why one went and the other didn’t.

Instead, he stayed with his brother’s class that day…which they also really liked. The kids in the class were a little confused. One even commented that there were 2 Big C’s in class! Kids are so funny.

So, will they stay in separate classes for kindergarten? We’ll see. There is a lot more “homework,” field trips, and activities that might be hard if they are separated. Plus, kindergarten is a full day, and I don’t know if they want to be apart that long every day.

For now, we’ll keep plugging along, and see how they feel in a couple of months. I’m really glad we tried the separation, no matter what we decide next.