You are here: Home / Activities and Lessons / Tumbling with Toddlers

Last Spring, I was so excited to sign the twins up for some summer activities. They didn’t do any formal activities in the Winter because I was still scared of the Flu and RSV. While getting sick is not a huge factor to a lot of parents when signing their kids up for activities, Preemie moms (or maybe just me,) still get really worried that something will send their kids back to the hospital.

After talking with my parents (you need one parent per child, so I would need help) we decided on Swimming Lessons and Tumbling Lessons.  I just want to point out that it’s hard for us parents of multiples to take classes unless we have help. Most toddler classes require one adult per child. I’m very lucky that we had our babysitter help during swimming, along with my parents, who also helped with the tumbling.

I completely understand why an adult is needed, but it can really prevent parents of multiples from doing these kinds of things. I’m not sure what the solution is, but I’m going to keep thinking on it.

Anyways, we had an awesome time in Swimming (which you can read about HERE,) in July, then it was time for Tumbling at the gym at the beginning of August. 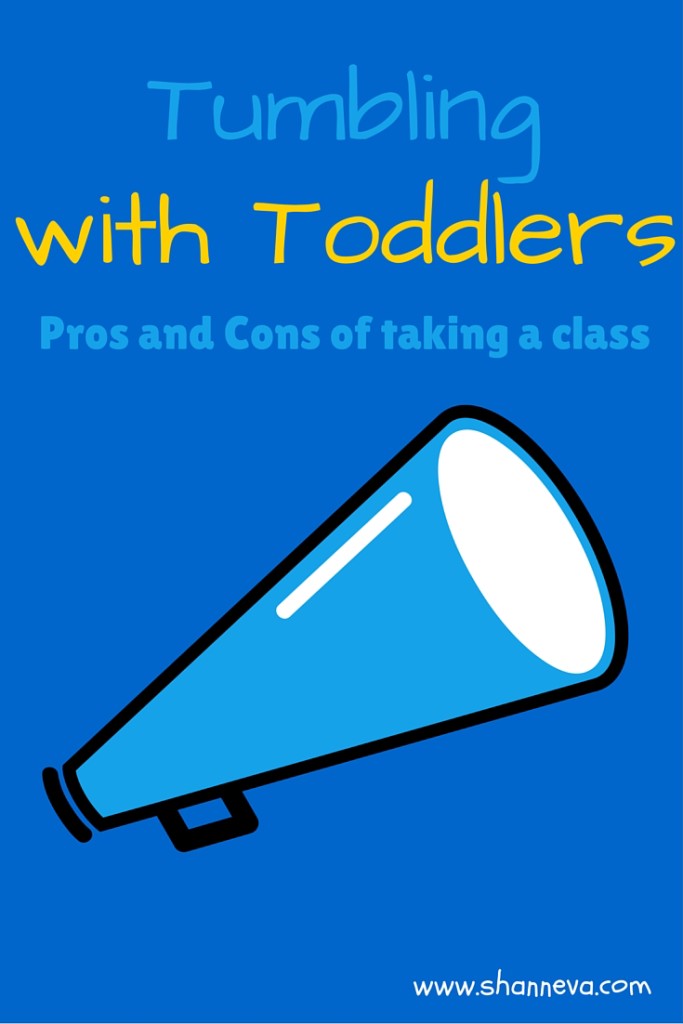 Both lessons were through our Park and Recreation Department, but we had very different experiences with each.

Swimming was wonderful. Our teacher was engaging, we sang songs, played in the water, learned some skills, and the twins got very comfortable in the water.

Tumbling was not my favorite. Actually, I was very, VERY happy when it was over last Friday. Not all of it was bad, so let me start with the good things about taking my twin toddlers to tumbling. 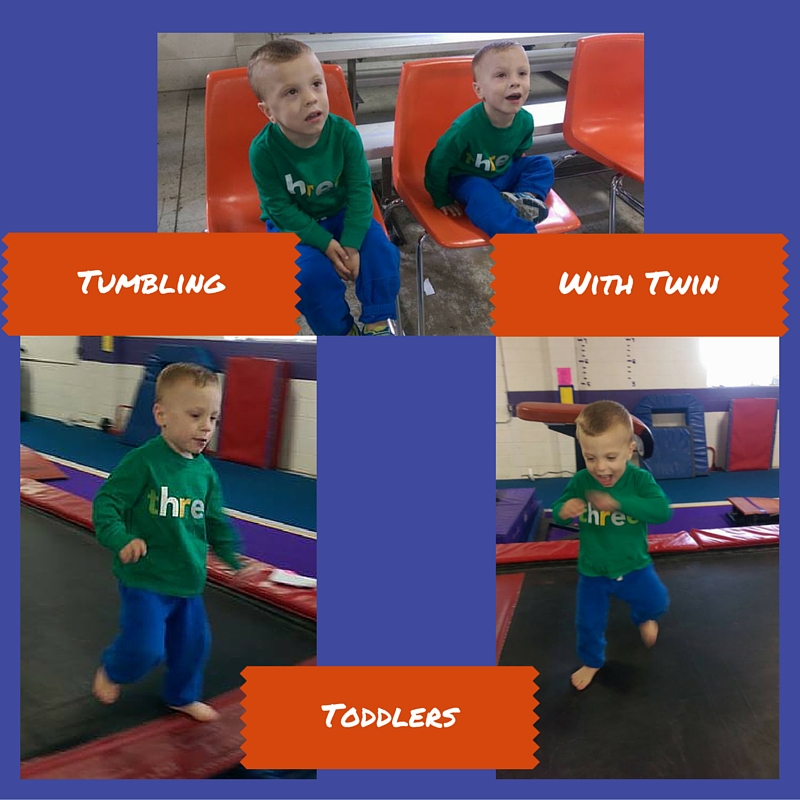 #1 For the most part THEY enjoyed it.

The first day we had some crying because I made the mistake of taking them to the playroom first. The lessons took place at a gymnastics studio that I wasn’t familiar with, so we got there early. We checked out the whole place, then I thought we would kill time by playing for a few minutes. All I have to say is there was ONE train to play with and TWO toddlers. Yet, the whole class, they still wanted to go back and fight over it the whole time.

After that, we ignored the playroom completely, and they seemed to have fun most of the time in class. They weren’t doing what they were supposed to be doing, but they were having fun. I’ll get to explaining that in a minute.

#2 We got out of the house and got some exercise

And I’m saying all of us got exercise! Between lifting them up while bouncing on the trampoline, to chasing them off the big kids mat, to running in circles with them, we all got a workout. It didn’t lead to great eating and naps like swimming, but I know they got some energy out.

#3 They conquered their fear of Trampolines

Really, it was only my big guy that was afraid of trampolines before the class. Now, they run and jump on them like old pros. No fear at all. 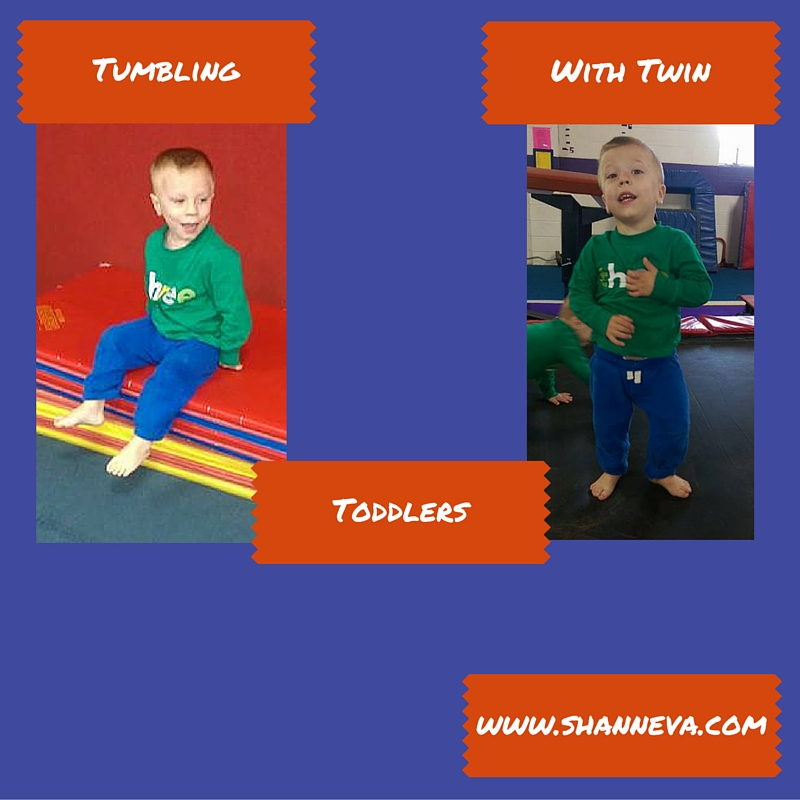 Now, before I get to the not so good stuff, I would like to say a couple of things.

First, my oldest son also took a class right after the twins, and loved it. He learned a ton, listened really well to the teacher, and wants to take lessons again next summer.

Second, I had a really different idea of what kind of class I was signing them up for. When I thought back to the tumbling classes I used to take when I was little, we were in the gym of a high school. We learned somersaults, played with a parachute, and did really simple stuff. I figured this class would be similar to their swimming in that we’d sing songs, do simple skills, and just get them used to being in a class setting. That was not exactly what happened.

Here are the reasons we will NOT be taking another tumbling class like this one next summer…or any other time.

Cons of our Tumbling Class

The class took place in an actual gymnasium that holds classes and has a gymnastics team. The Park and Recreation Department had some sort of deal so our classes were taken there and taught by their staff.

I’m not sure if all gyms are like this (yes, I’m sure they are not,) but it smelled terrible when we walked in.

Obviously, all the gymnasts must take off their shoes and socks to do all their activities, but the smell was overwhelming. It was apparent not much cleaning went on there…if at all. There was dust all over the place…and not just chalk dust from the gymnasts hands. Actual dust dust.

Basically, I had to wipe down everyone and strip their clothes everyday after class. My laundry is still piled up from the last two weeks. Ugh.

The first person I met when we got to the gym rubbed me the wrong way. I didn’t know where to go or what to do, and told him I was there for the Park and Rec class. He very rudely said, “Well, there are tons of classes that happen at the same time. What class?”

Listen, I realize you may be busy and we are not a priority since we’re not training for the Olympics, but you should really at least be pleasant when greeting new students. I later found out this man was also the owner.

Our actual teacher was nice enough, but she didn’t really seem interested in being there. She had three of her own children wandering around, and most of the time she made her older two girls demonstrate the activities, while she was busy talking to someone or just standing around. Every once in a while, she would throw out a “good job,” just so we knew she was still there.

On two of the days of the class we had a substitute teacher. She was a young college student, and she was wonderful. She paid attention to the twins, she participated in all activities, and made things fun. For example, when they started on the trampoline she drew them each a star with chalk with their initial for them to jump on. They loved it. If only we could have had her teach the whole time.

Each class we started on the long, runway-type trampoline. The twins like bouncing on it, and even better was running down it and jumping onto the big squishy mat at the end. All of those things would have been perfectly fine. However, she wanted them to jump certain ways…knees to your chest, legs apart and together, drop down to your bottom and jump up.

Hmmmm. Maybe other three-year-olds are better at following these kind of instructions, but mine just wanted to run and bounce. And that’s all that they did.

After that went on for about 20 minutes, we moved to a room with different stations set up.

We all sat on the floor and “stretched” first. This part was actually OK because it was geared towards toddlers. They pretended we were making cupcakes or pizza while stretching out legs.

Then, it was time for the stations. The teacher went around and described what they should do at each one.

She would then just stand in the middle, and we were supposed to instruct our children on what to do. Sometimes, she would send one of her girls to help spot them. Terrific.

I wanted to remind her every day that they are three, and that I am not a gymnastics teacher, but by that point I just didn’t have the energy. I could totally understand these complicated activities if we were training to be on a gymnastics team, but we were there for fun.

#4 The Lack of Social Interaction

On the first day, there was one other little boy. He never came back.

I’m guessing either his mom felt the same way I did about some of the things I mentioned or else my twins scared her. I’ve told you about their screaming, right? Well, when things weren’t going their way in the class, they screamed. Or ran. Or ran and screamed.

I tried my hardest to quiet them down and to corral them into the place we were supposed to be. That’s all I have to say about that.

Anyways, I was hoping that even if the activities weren’t the best, at least we would meet other kids and interact with others. Unfortunately, that didn’t happen since there wasn’t anyone else in our class.

Overall, even though it wasn’t the best experience, I’m still glad we did it. We all learned a lot, even if it wasn’t what we were supposed to be learning. For example, I learned we need to work on our listening skills. I also need to work on my reading skills, so I will know what I’m getting into next time I sign up for a class.

Also, I learned that we are not going to be on a gymnastics team anytime soon. Or ever.