You are here: Home / Blog / An Accident and Everything that comes After

Yesterday started off as a typical Wednesday. The morning rush to get dressed, eat, and out the door for summer school. I even packed up my car with some things to return and drop off while the kids were occupied. Everything was going smoothly, until it wasn’t. An accident. 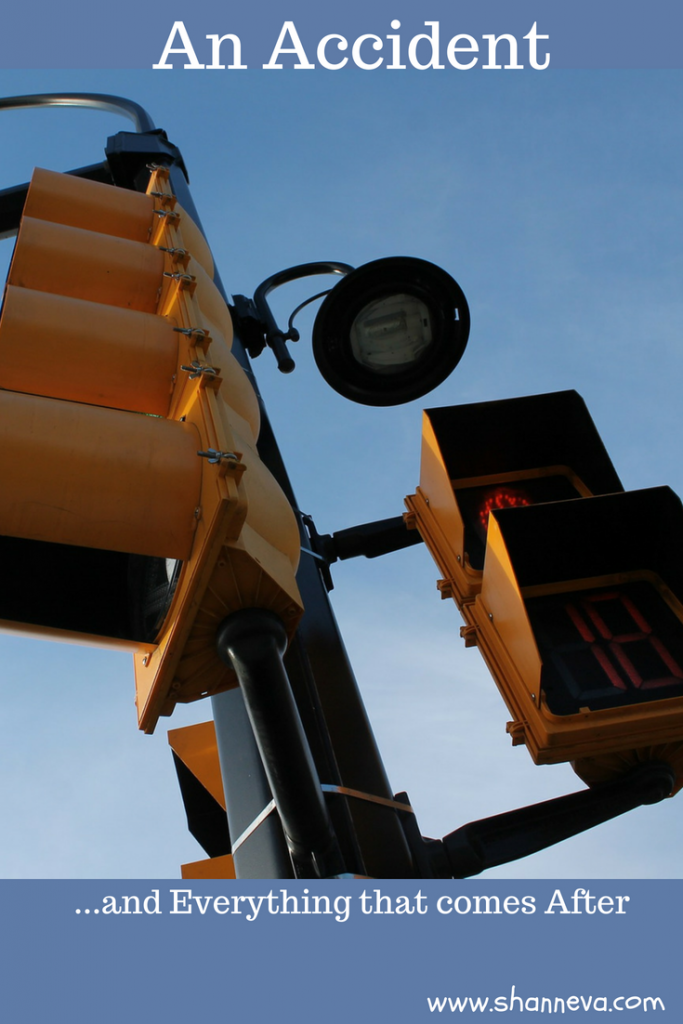 After dropping the kids off, I followed the traffic pattern that had been set by the school. I sat in my car, a couple of cars back, waiting to make a left-hand turn at the intersection. All of a sudden, out of the corner of my eye, I saw a black car coming at me.

Then, a loud crash, glass everywhere, and complete shock.

I had been hit along my driver’s side with a great amount of force.

I didn’t know what to do, so I just sat there. The people driving the car got out and asked if I was OK. Another man stopped to see if I was OK.

I really wasn’t sure. It was hard to process what just happened. There was glass on my lap, in my ear, in my hair. The door was pushed in, and my side airbag went off. It was just so loud. Everything seemed to happen so fast, yet go in slow motion.

So, I just sat there, not knowing what to do, who to call, or if I really was OK.

At that moment, I decided to just call 911. I explained what happened, as the tears were falling, and they said that someone was already on their way.

Luckily, someone had called a police officer, or one had been driving by, I’m not sure, but he came to my window at that moment. He told me not to move, and that other help would be there soon.

I just remember seeing the other driver’s face, and how concerned they were. They just kept asking if I was OK. I wanted to say yes, but I didn’t really think that was true. My body felt OK, but I was scared. I didn’t feel OK. I felt completely shaken.

I asked the officer if I could call my husband, and he said I could. I’m not sure why I even asked, but I just felt like I needed permission to do anything.

The paramedics came, and asked me if I was hurt. My head hurt a little, as did my ear and my arm, but I thought I could move. They had me crawl out the passenger side, covering the seat so I wouldn’t get anymore glass embedded in my skin. I went onto their gurney, and they rolled me into the ambulance, so they could assess me.

He didn’t feel any broken ribs, but my arm had a burn and my head hurt, so he recommended they take me to the hospital. The impact of the car looked very severe, so it was better to be safe and check for any internal bleeding. I called my husband again, and he followed us there.

They brought me straight into a room, but glass was falling everywhere, so they had me get up and get undressed. I brushed off as best I could, they changed the sheet, and then they took my vitals. A couple of scans and X-rays were ordered.

By this time, I had also called my parents, and they came too. It was good to be surrounded by my family, but I hated seeing the pain and worry on their faces.

Luckily, all scans and X-rays came back normal. They warned that things could change, so be on the lookout for any signs of concussion. I would also be very sore for the next few days.

While I was very lucky I wasn’t seriously hurt, I was more thankful that my boys weren’t with me. The whole back seat behind me was destroyed. I can’t even think about what might have happened if someone had been in that car seat.

I think I’m still in shock, and I know I’m still not OK. I keep crying, and the accident plays on a loop in my head. I just don’t understand why it had to happen.

I know it’s “normal” after an accident to be shaken/anxious/upset, but it still sucks. Everything about it sucks.

Don’t get me wrong. I know I’m lucky that nothing serious happened to me, and I am very thankful for my health, but there are still so many other things to deal with now that we weren’t prepared for.

My car is a complete wreck, so we only have one working car. I know cars are a luxury, but we relied on ours. I work part-time, and my husband drives his car for a living (he’s in real estate.)

Luckily, the dance studio is on a short break since the Showcase, but the rest of life hasn’t stopped. Now, my husband has to drive the boys to summer school, and my parents have to pick them up. We have to arrange for rides to activities and rearrange appointments.

I can’t just run to the grocery store, even though we’re out everything. It’s all the little things that I took for granted, like going to the gym or meeting friend for book club, that have to be cancelled because of one accident.

And all my stuff that was in my car. I actually don’t even know where my car is because they moved it again. I know it’s just “stuff” but I still want to get it back.

Although, I don’t want to get in a car right now or think about driving again. It especially sucks that the accident happened near their school because I will have to see that spot all the time.

Plus, there are all the monetary concerns.

We were saving for things to improve the house, for a vacation this Fall, and trying to build some actual savings. Now, I feel like we have to start over.

Even though we’re hoping their insurance will cover a lot of the cost, it won’t cover nearly enough. I got taken to a hospital out of our Insurance Network, so I can’t wait for those bills. I can’t imagine they will be able to fix my car, so we will have to buy a new (well, used) one. We weren’t prepared to buy a car at all.

Everyone tells me to just rest and take it easy right now, but that’s something that is hard for me. I can’t stop worrying or stop my emotions right now.

I know my anxiety plays a huge part in that, but it’s not something that is easy for everyone to understand.  So, I just ask you to be patient with me right now.

If I don’t return your calls or texts right now, please forgive me. I’m just in a fragile place.

If I didn’t tell you about the accident, and you’re reading about it here for the first time, I’m sorry about that too. I’m just on the verge of tears all the time right now, and it was easiest just to get it out here like this.

I guess my whole point is that everyone deals with trauma different, and this is my way.