At the beginning of my twin pregnancy, I read a lot about bed rest. It’s a pretty common occurrence in twin pregnancies, and honestly, it didn’t seem to bad to me. Unfortunately, I didn’t realize the full gravity of everything that would lead to bed rest.

Bed rest isn’t simply laying on the couch or in bed just for the fun of it, or just because you are uncomfortable. It is something that is prescribed by a doctor when there aren’t many options to help save your baby and pregnancy.

For me, I had no other options. I wasn’t a candidate for surgery, even though one of my twins was not getting enough blood flow or growing at the same rate as his brother. They weren’t sure if one or both of my babies would survive, but there was nothing they could do to help them. The only advice was drinking lots of fluids, eating a ton of protein, and getting as much bed rest as possible.

They were hoping the bed rest would increase the blood flow to my babies, and lower my blood pressure, which was on the higher side. I took their advice very seriously, and tried to eat, drink, and rest as much as possible.

While bed rest doesn’t sound bad, it is very uncomfortable when you are pregnant. It is also very hard to do when you have a toddler. Bed rest also gave me a lot of time to think, which wasn’t a good thing either.

When I reached viability at 24 weeks, they moved me to the hospital for bed rest and constant monitoring. This was even harder, since it mean physical separation from my son and my family. Sure, they could visit, but it wasn’t the same as being with them all the time at home. I felt like I was missing critical time with my son, and the guilt was terrible. 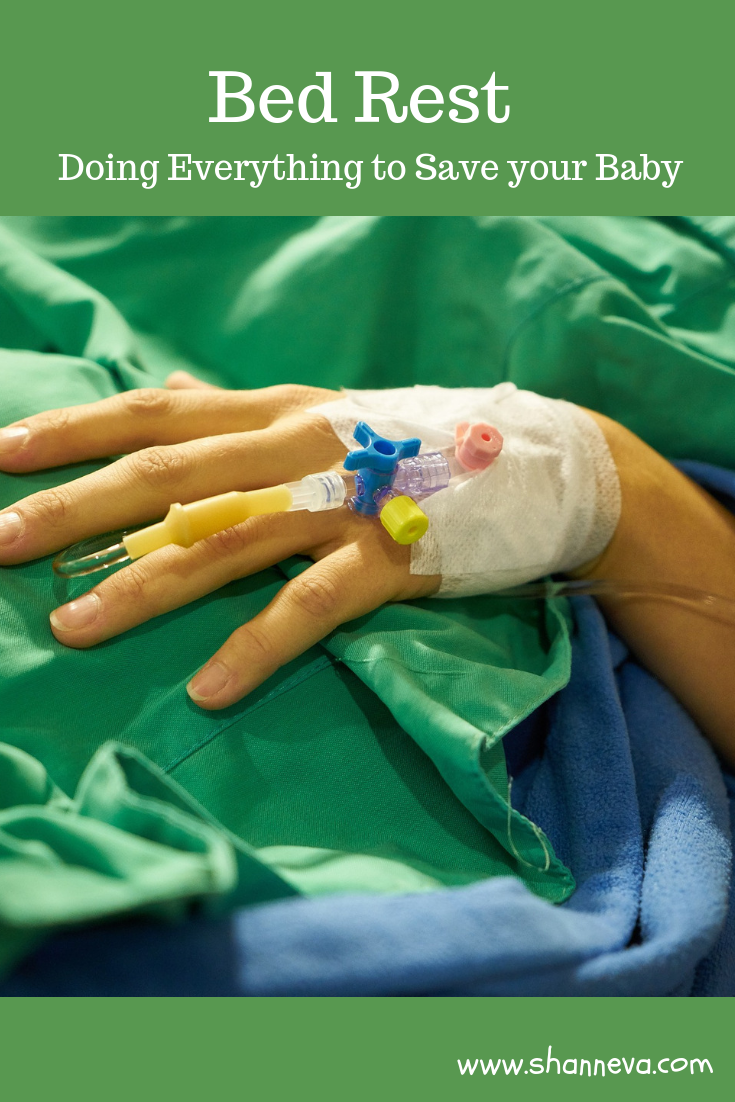 Unfortunately, I didn’t make it very long on hospital bed rest. After a little over a week, my sweet boys were born at 25 weeks, 5 days.

Today’s mother, Olivia, on the other hand, had a long journey on bed rest. I’m honored to share her journey, along with her sweet boy’s continued fight in the NICU. 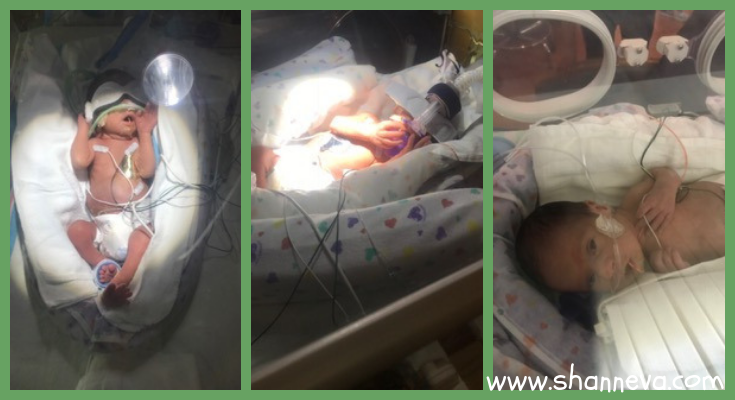 He is currently going on his 4th week in the NICU, and there’s been no discussion as to when he’ll be coming home.

His biggest milestone was when they took his breathing tube out two days after he was born because he was breathing over it. We were ecstatic because we were told by several professionals that his lungs would be underdeveloped, and we should terminate him.

The Neonatologist says his lungs are good, and he isn’t concerned. They started him on my breast milk 2 days in, and he’s been gaining weight steadily. I just recently was able to nurse for the first time.

He is on caffeine to help his breathing and just got off the cpap. Sebastian is now 5 lbs.

He’s had several setbacks where he was put back on high flow oxygen and the cpap. His little lungs were working to hard when they removed the cpap and high flow.

The NICU roller coaster can be a rough ride. 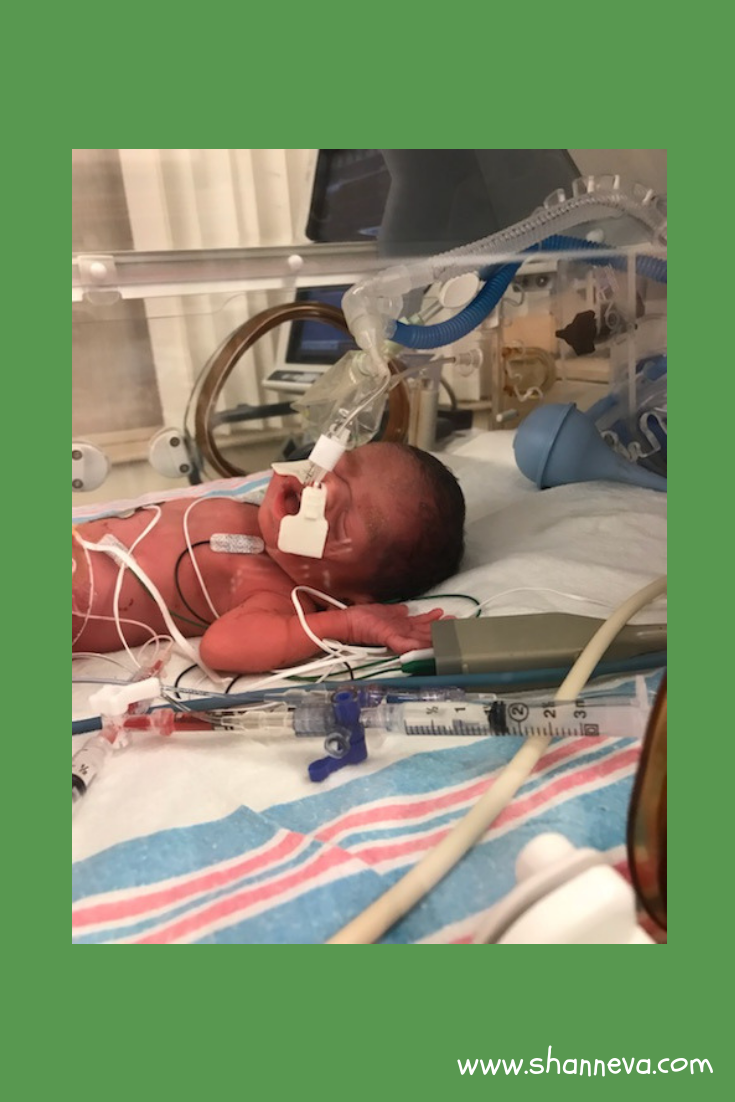 No, I have two other boys who went to full term with no complications at all.

I am healthy and never thought I would experience a high risk pregnancy.

We were given a 35% survival rate and were told to terminate multiple times. I couldn’t understand why I was being told to end his life, while also being told that his heart rate was strong and my pregnancy hormones were high. It did not make sense that after 2 weeks from when my water broke to being diagnosed with Pprom my body hadn’t gone into labor.

But, the specialist was insisted that he would not make it.

He also informed me I had placenta previa. Once I had a follow-up appointment with my OBGYN and we told him our plans to NOT terminate, we were finally given encouragement that he could make it.

I was put on bed rest indefinitely.

Almost 5 weeks into bed rest at 22 weeks 6 days, I started bleeding, it was light bleeding. I was scared and went into labor and delivery they didn’t even bother doing an ultrasound once they found out I was not at viability. They discharged me saying to come back if the bleeding becomes heavy.

I went home and the next morning the bleeding became heavy. I went back and this time they did ultrasound, measuring of my uterus, monitoring and blood test. He still had a strong heart and my cervix was not dilating. There was no hemorrhaging.

Again, the doctor came in and said he was willing to induce me. He had no encouragement what’s so ever and said I was at risk of infection and sent in a Neonatologist to talk to us.

The Neonatologist gave us statistics, and we still refused to terminate. I told him I’m one week away from steroid shots, I want to try. He left and when the doctor came back in he had a whole different attitude and was somewhat encouraging that I should let nature takes its place. He told me to come back in one week and he would admit me to the hospital at 24 weeks and I would stay until my son was born.

Hospital bed rest was hard. On the first day, I was given Magnesium Sulfate, steroids and loaded with antibiotics. The Magnesium Sulfate was terrible. It made me extremely hot and gave me chills. But my son needed it, it would help prevent brain bleeds and help his nervous system. I was prevented from getting up for 2 days.

After finishing my 48 dosage, I was able to use the bathroom and shower. The first two weeks were easy for me. Then I started to bleed heavy again and was monitored for 2 days unable to get off my bed. I had started to contract but they went away within a couple of hours. This episode caused anxiety attacks. I was ready to go home and I cried a lot. I started feeling trapped in my room, and I was convinced that if I had a C Section I would not make it.

I lasted one day shy of 6 weeks before my body went into labor at 29 weeks 5 days. I was given Mag again and steroids for a rescue booster. The Mag was worse this time around because it was mixed with contractions. My nurse kept telling me I was not contracting because the monitor was not picking them up. She said the Mag relaxes the cervix. I was given a device to track the contractions.

Finally, I couldn’t take the Mag any longer and they lowered the dosage from 2 to 1. My nurse was finally done for the day and my night nurse came in.  I was glad because I was sick and tired of being told I was not contracting. My night nurse was someone I had developed a relationship with, and I was happy to see her. Because we lowered the Mag it was no longer heavily relaxing my cervix and the monitor started picking up my contractions.

They went from minor period cramps to about a pain rate of a 7. She checked me and I was dilated to a 4 and a half. She notified the doctor, and because my son had been breech for the last two weeks, he said we would do the C-Section now. He checked one last time with an ultrasound and he was still breech, and I was taken to the surgery room.

I was scared. I had been having panic attacks over having a C-Section and right after my spinal tap, I freaked out from the loss of feeling to my legs and tried to jump off the table. I was given something to calm me down and it worked. I laid there as they performed the surgery and spoke with my husband about random things. My upper body was shaking because I was so cold.

Finally, I heard a faint cry. I almost missed it. My son was finally born, and I wasn’t even shown him. The NICU wasted no time, they accessed him and gave him a breathing tube. My husband cut the umbilical cord, and then he was taken to the NICU. 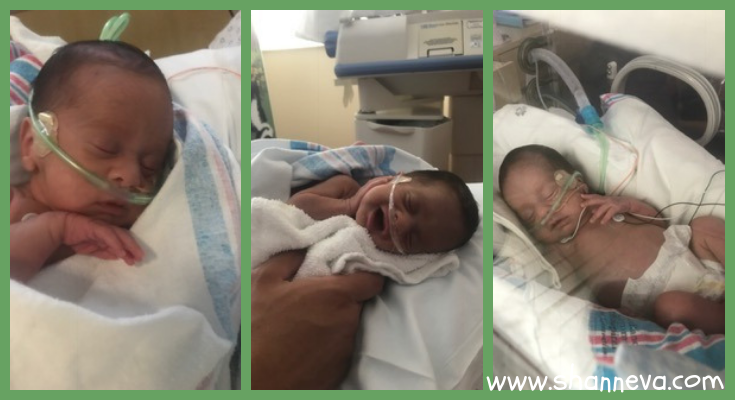 Sometimes these professionals are so discouraging and their bedside manner is nonexistent when delivering bad news. Just know that they aren’t always right. I couldn’t live with myself and knew I would always think of the ‘what if’ I would not have listened and tried to save his life.

Our babies are viable as long as their heart is still beating.  Pprom is not always a death sentence. I went 13 weeks before my body went into labor.

It is possible with complete bed rest.