You are here: Home / Blog / Pediatric Surgery: How to Prepare Your Family

When your child is hurt or has a medical problem, it is every parents worst nightmare. Pediatric surgery is not something anyone wants for their child, yet it is often necessary.

This, unfortunately, is our reality right now. 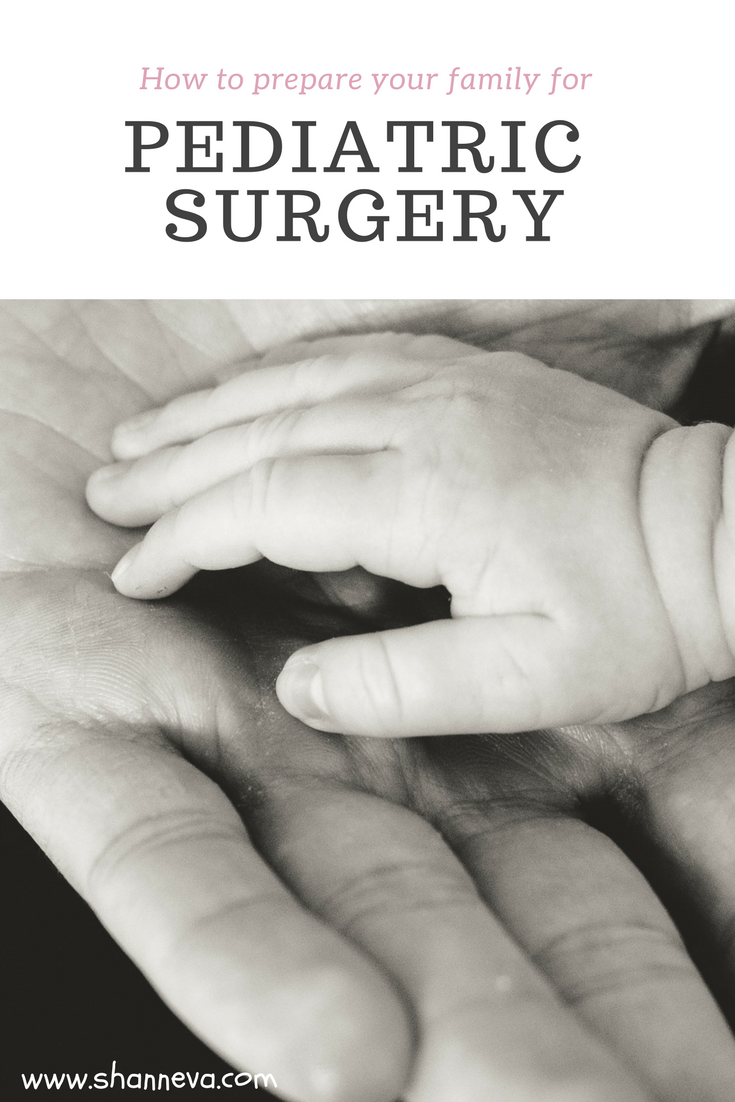 Little P goes in for pediatric surgery this Thursday, and I’m a nervous wreck.

It will be his first pediatric surgery since being in the NICU. It will also be the first time he is put under anesthesia since then.

I’m not sure which part I’m more scared about.

Obviously, this pediatric surgery mostly effects Little P, but it will also impact our entire family.

Little P is having Orchiopexy, which is surgery for undescended testicles. He is also getting circumcised, as he was too little to have it done in the NICU. In addition, they will be performing a sedated MRI. He has a sacral dimple, which could indicate a tethered spinal cord. While he doesn’t have any other symptoms right now, if he has problems in the future, it’s good to know that this could be the underlying cause.

Even though it sounds like a lot, the doctors (and every website I’ve checked!) say it’s a pretty common procedure. It is also outpatient surgery, so as long as it is done early enough in the day, I’m hoping we can go home.

We’re traveling about an hour away, so I want to make sure he’s really OK before we head home.

Being worried about your child before surgery is completely normal. It’s hard to see your child have to go through a medical procedure and be in pain.

If you’ve never had a child in the hospital, the unknown can be very scary.

If your child has been in the hospital before, a new surgery or hospital stay may bring up past emotions and trauma.

For me, this surgery is bringing me back to our time in the NICU.

I remember those early days when we didn’t know if our boys would survive. I remember the tears and the prayers when each boy had to have surgery.

I’m not sure how I’m going to handle seeing my sweet boy in a hospital gown and in a hospital bed. I won’t even let myself think about the actual procedure or sedation yet.

In fact, as a coping mechanism, I’ve been putting everything about this procedure off. I only called to schedule his pre-op appointment last week. I haven’t looked through the paperwork or made any travel plans.

I’m protecting myself as much as I can, so that I can be strong for my baby.

I should also mention that I suffer from anxiety, so situations like this are a lot for me to handle.

But, this isn’t about me. It’s about my child, and for him, I can do anything.

How to Help Your Child

So, how do you  help your child when you are the one that is terrified?

Well, as hard as it is for me to do, I’m not going to let him see my fear. I’m going to hold in the tears until he is back in that operating room. I’m keeping my mind busy with other things until the very last-minute, and keeping our routines the same, as much as possible.

Honestly, Little P doesn’t exactly understand what is going on. I’ve tried to explain it to him a little bit, but he’s mostly just excited that he gets to miss school, and will get to watch movies when he’s all done.

I did order a few books from Amazon (Affiliate links included*) which I hope will help both him and his brother understand a little better.

*If you click-through the pictures above, you will be taken to Amazon to purchase through my Affiliate link. There is no additional cost to you.

And speaking of his twin brother…

How to Help Your Family

I think he is having the hardest time of all.

The hospital suggested that we don’t bring other children along. We need to be able to focus on helping Little P through the procedure, and not worry about entertaining or calming down anyone else.

When I explained to Big C that he would be staying home with Mr. B, Grandma, and Grandpa he got very teary. I’m not sure if it’s because he’s been having separation anxiety lately, or if it’s because he’s worried about his brother. I don’t really think he understands what is happening to his brother, but he does understand that he won’t be with him.

Actually, they have hardly ever been separated. They’ve only spent one night apart, and that was when Big C came home first from the NICU. Every night before and since, they’ve shared a room.

Ugh. Until I wrote that, I didn’t realize how hard this is really going to be.

Again, I have to be strong, and do what I think is best. For now, I have been avoiding talking about the surgery with them.

This isn’t to say I won’t talk about it before we leave, but I don’t think giving them extra time to think about it does anyone any good.

They are only 5, and luckily, they can be distracted easily.

Even though I’m trying not to think about the actual surgery, I am preparing for it. I’m making each boy a special blanket, so they will have something to snuggle with, whether they are at home or in the hospital.

I’m going to get some new movies, coloring books, and special snacks for recovery. We will need to keep Little P from being too active, and also don’t want to upset his tummy after having anesthesia and surgery.

We are so lucky that family can stay with both Mr. B and Big C at our house. I think that will be comforting.

I’m going to try to keep them in their normal routine of going to school, but also be flexible if we see they just can’t handle it.

I’m also going to ask the twins’ teacher if they might want to make cards for Little P. If not at school, I’ll have Big C and Mr. B make him one at home.

I think it will help them feel like they are doing something to help cheer him up and recover.

Am I forgetting anything? Have you experienced a surgery with your child? Was there anything that was helpful to them? Or to you?

Any thoughts, prayers, and good vibes are appreciated! I will post an update after surgery on Thursday.