You are here: Home / Blog / Sedated MRI for your Child: Preparation and Procedure

For a NICU mom, it really is. After breathing tubes and ventilators as a newborn, putting my child to sleep for any procedure is hard. So, when the doctors told me that he needed a sedated MRI, I freaked out a bit.

In all reality, this is a routine procedure. However, there are always risks with any type of medical intervention, and especially, sedation.

So, for a mommy that already worries about everything, this just added a big pile of stress to her shoulders. Plus, the results would help determine if another surgery was needed for Mr. P.

The stakes were pretty high. 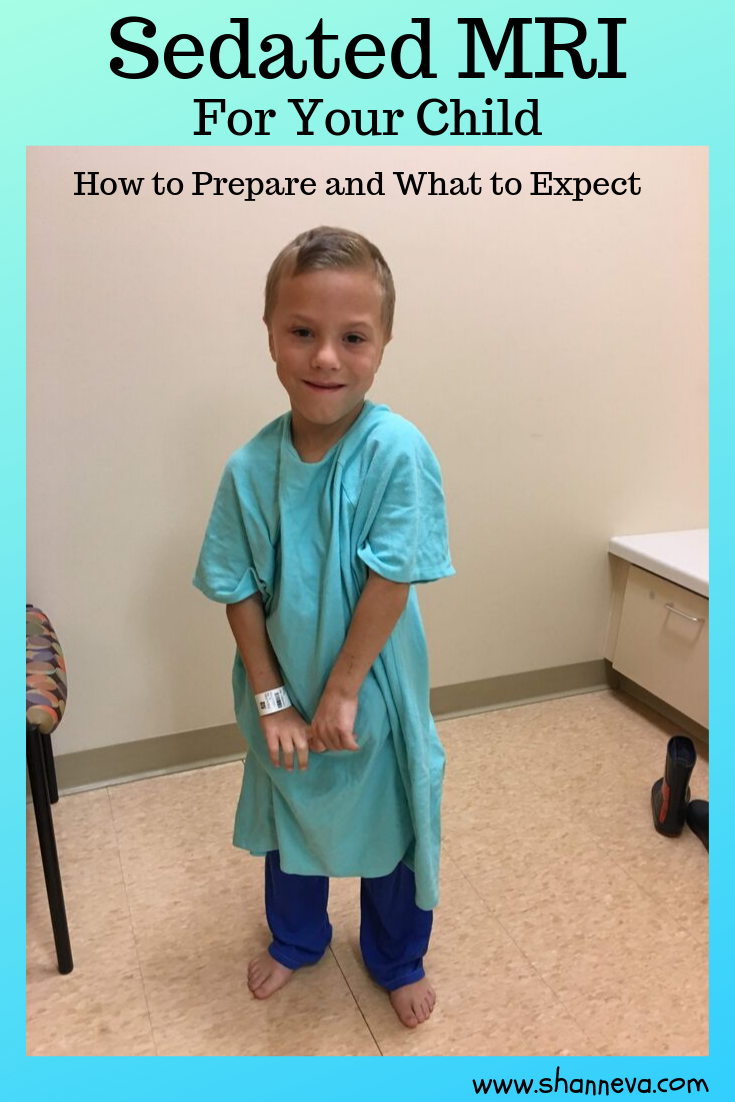 The Reasons Behind Sedation

As an adult, an MRI is just like any other scan or X-ray. There is no need for sedation because you can sit still and listen to directions.

As a child, this can be difficult. An MRI takes a long time (our procedure was to take about 45 minutes to an hour) and requires lots of stillness. Also, going inside the machine itself can be scary for a child. Plus, it’s very loud. So, often, they sedate a child in order to get the images they need. It makes it easier on the technician, as well as the child. No one wants it to take longer than it has to.

How to Prepare for a Sedated MRI

After meeting with our Neurologist, it was determined that she needed more information to see what was going on with Mr. P’s spine. She wanted to see if anything was pulling it down or if it was tethered at any point. We had a sedated MRI when he had his first surgery, but since we were at a new hospital (thank you insurance!) she wanted a new MRI to see specific areas.

So, a nurse from the scheduling department gave me a call. She asked if my son could sit still for at least 45 minutes. I honestly wasn’t sure. At his age, she said most kids are given sedation, so I took her advice, and scheduled the procedure that way.

Since there would be eating and drinking restrictions for the sedation, I wanted to schedule it for early in the morning. The nurse reminded me that nothing else should be planned for that day. You never know how someone will respond to anesthesia.

Luckily, Mr. P isn’t a big eater, so I wasn’t really worried. We did let the boys all stay up a little later the night before to watch a movie. We gave them popcorn, and I tried to get Mr. P to eat a few more snacks, so he wouldn’t be hungry in the morning. I reminded him not to eat or drink in the morning when he got up.

Talking about the Procedure

After scheduling, another nurse from the actual clinic called. She walked me through what was going to happen. They would give Mr. P some medication through an IV to relax him, and then they would sedate him in the procedure room. They would not be intubating him (giving him a breathing tube) which was a relief to me.

She also asked me some questions. “Large tonsils” were indicated in his chart. She asked if they had been removed, but they had not. He doesn’t snore, and they haven’t cause problems yet, so his primary care doctor was just watching them.

When the doctor ordered the sedated MRI, Mr. P was there. However, it didn’t mean he understood what was going to happen.

So, a few days before, I tried to explain again. I used simple terms, but I’m still not sure that he really got it. He did, however, remember the sedation from his surgery, and was not excited to be “dizzy” when he woke up. I felt really bad, but I knew it had to be done.

We also tried to explain what was going to happen to his brothers. This forced me to calm down, and also they would be my second line of defense when it came to remembering about the no food in the morning.

As with any hospital procedure, it’s best to only take the child that is the patient. It’s hard for siblings to not want any of the parent’s attention, and the parent really needs to focus on just that one child.

So, my husband took time off of work, and the grandparents were on standby.

On the morning of the procedure, I got up extra early to make sure Mr. P didn’t eat or drink anything. Of course, it was the one day he actually slept in!

So, I got him up (without even waking up his twin brother!) and got him ready to go. I let him stay in his pajamas, and just slipped on some rain boots to make changing at the hospital easier.

We checked in at the clinic, got in a hospital gown, and first made our way to X-ray. In addition to an MRI of his spine, the neurologist wanted an X-ray to check for any curvature.

One thing I did forget was socks. Since he was in footie pajamas, he didn’t have any on. Luckily, the nurse found some for him, but that was one thing I would recommend bringing. Fuzzy socks are comforting!

Mr. P did great by listening to the technician and standing still. He even got a prize. 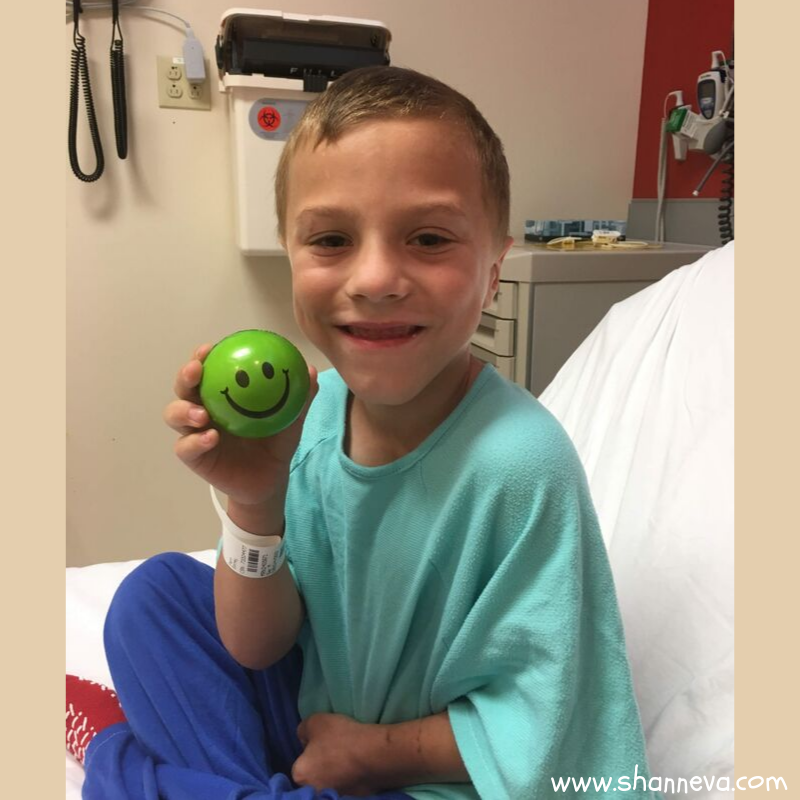 Once we got to our room, the nurse explained everything again. They took Mr. P’s vitals, and then the anesthesiologist came in. He looked in Mr. P’s throat and had him say “Aahhh” a few times.

He then left, but came back after a few minutes.

Unfortunately, it was not good news.

Mr. P’s tonsils were too big.

At the remote clinic we were at, they did not have any type of breathing tube equipment. As the doctor explained, when someone is sedated, everything relaxes. Since Mr. P’s tonsils were so big, they were afraid they would relax and block too much of his airway. Without any way to get him additional oxygen, if it should dip too low, the procedure would be unsafe.

So, we needed to go the main campus of the hospital. Ugh.

Luckily, they found an opening that afternoon. Unluckily, that meant no solid food for Mr. P for another 6 hours!

So, we headed home, and had to rethink our day.

My husband went to work for a bit, and Grandpa was up for watching Mr. P’s brothers. He brought all three boys slushies, which they were pretty excited about. I didn’t realize that was OK to have, but the nurse had actually given me the idea.

The slushies were definitely a treat to have at 10 am, so it kept them occupied, and Mr. P’s mind off other food. The time home went surprisingly fast, and before I knew it, we were off to the main hospital.

I gave myself extra time because a bigger hospital meant longer time to park and find the location once inside. It also meant another hospital gown, but this time I had the fuzzy socks!

We only had to wait a few minutes once Mr. P changed and then off to his room.

The nurse was amazing!

She asked Mr. P all the questions, like his name, and talked to him about what was going to happen. After that, she asked me if we had considered doing the MRI without sedation.

Um, for about a second, but I didn’t think he would be able to hold still that long.

She explained that he could watch a movie, and that if he was moving too much, they could always stop and sedate him then. It couldn’t hurt to try.

Yes! I loved that idea. No sedation meant less worrying for me. Plus, no recovery time, and no dizzy feeling that Mr. P was dreading.

Now, why didn’t they think of this at the first clinic???

So, we hit the bathroom, picked out a movie (Despicable Me 2,) and the nurse walked Mr. P to the machine. I stayed in the room, just in case they needed to sedate him. They would first come tell me.

I was close enough that I could hear everything that was happening. The MRI machine is super loud, but the technician would talk through a microphone, so that Mr. P could hear her. She would tell him what was happening and when he could move a bit.

After about 10 minutes, the nurse came back and said he was great. She said I could go walk around, but I decided to just stay put and read.

The scan ended up taking about 40 minutes and Mr. P made it through the whole thing! No sedation necessary!!!!

He got a prize, cookies, and a soda. He dressed and we went home right away!

So, even though we didn’t end up with a sedated MRI, I hope the preparation information was helpful. Since Mr. P did have sedation with his surgery, I can tell you a little about recovery.

After an MRI, unlike surgery, there won’t be any pain. Your child may feel different, but Mr. P was very sleepy and dizzy. He could barely keep his eyes open, but the nurse wanted him fully awake before we could leave.

We gave him a popsicle and Ipad to try to wake him. The doctor came in and explained the surgery, and then the nurse had him walk around the room a few times. Once he was able to do that, with assistance from me, we were able to go home. I sat in the backseat with him, and it was OK to let him sleep on the way home. He wasn’t able to walk by himself because he was still pretty out of it, and then we got him to bed.

This time, as I mentioned, there was no recovery, since he hadn’t taken any medication. It was really great that he could eat and drink anything. After sedation, it’s important to go very slow, since the child may feel sick too.

I think the biggest thing I learned from our sedated MRI experience was that your child can really surprise you. Who knew that my wiggly, squirmy child would be able to sit still for almost an hour? I also didn’t think my whiny little guy would be so great all day without really eating.

Even though I tried to hide it, I think he knew I was pretty stressed and worried. His behavior and actions were so helpful and brave.

I should have known that my NICU warrior could do anything! 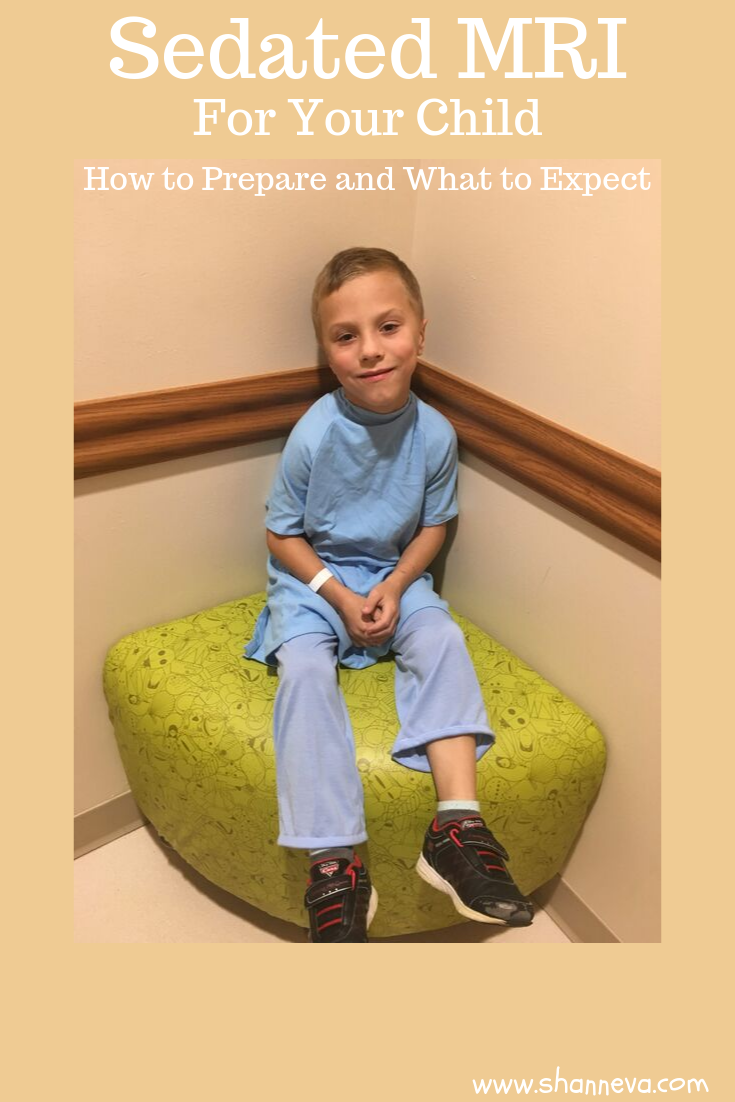