Thank you so much to everyone that stopped by to wish my son a Happy Birthday yesterday. I think he had a lot of fun! They really made it a special day at school, and then went we went for dinner after.

I’ll have a full recap tomorrow, but today, I wanted to share the snacks from his Star Wars party. 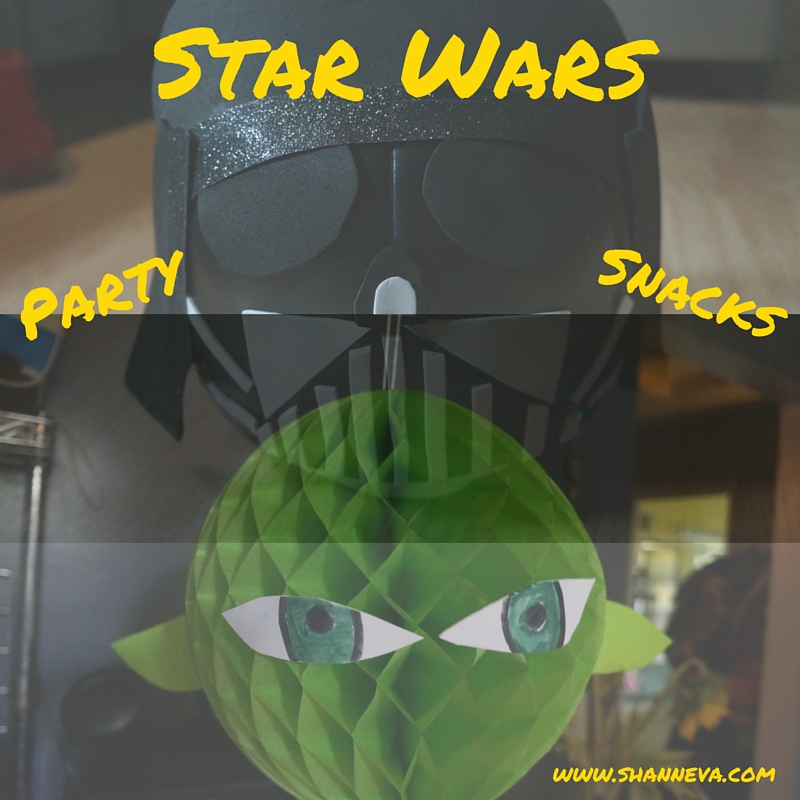 Notice, I said snacks. I purposely planned the party from 2 pm to 4 pm so that we could avoid a huge meal. Not only does it cut down on costs of the party, but it also cuts down on the stress for me, who is not that skilled in the kitchen.

Me and my husband came up with a list of food we thought would work, then we brainstormed on what we could call each item to give it a Star Wars feel. I then hopped on Pinterest, and found a lot of the same ideas.

Here was our menu, along with the names we gave everything. I wrote out the labels, but you could certainly print them on your computer. I also used stickers from a Star Wars Lego Sticker Book to jazz them up.

Let’s start with the drinks… 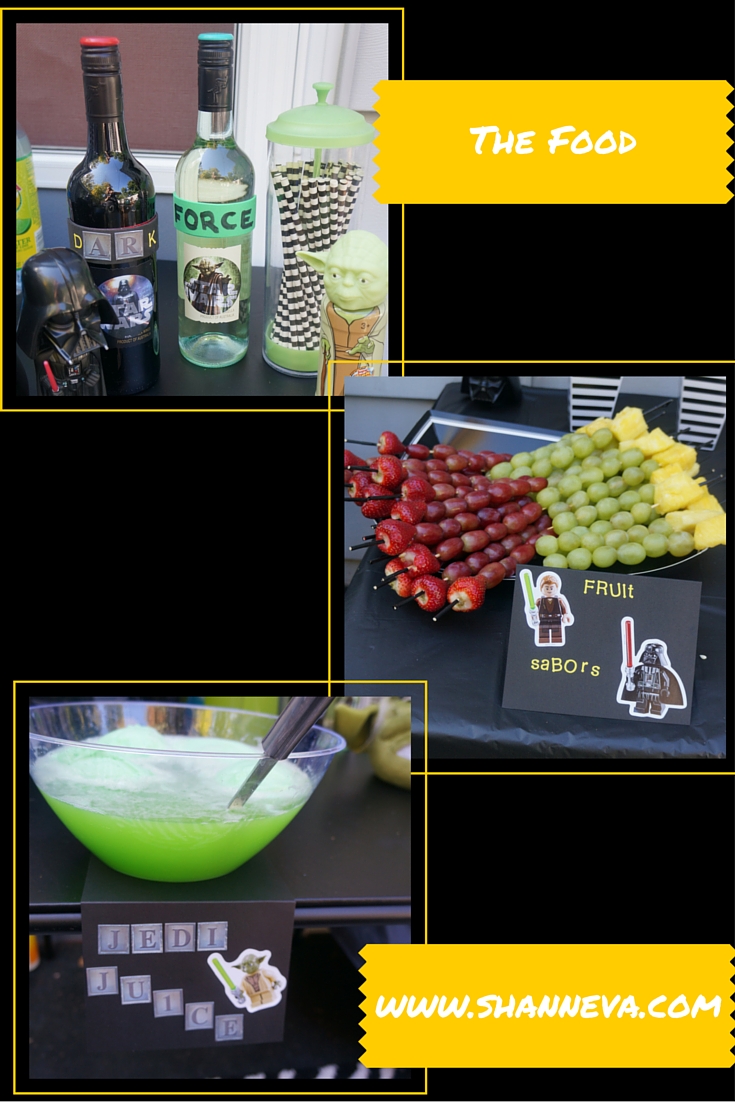 Over on our beverage table, we had both Red (The Dark Side) wine and White (the Force) wine. I also made Jedi Juice for the kids. It was Green Hawaiian Punch, 7-up, and lime sherbet. I also had a pitcher of Limeade and Green Hawaiian Punch, for the kids that don’t like “spicy” (fizzy) drinks, which are my kids. We also had a bottle of Vodka and Tonic Water for the adults. I think the Vodka would have been pretty good in the Jedi Juice too.

Right next to the beverages, were our Fruit Sabors. I saw a version with just grapes a couple of times on Pinterest, but I wanted to add something. So, I made half with a strawberry at the bottom and red grapes (again, representing the Dark side,) and the Force side had pineapple at the bottom with green grapes on the top. I used wooden skewers, and put black tape at the bottom to make them look more like the light sabors.

Next, some more snacks… 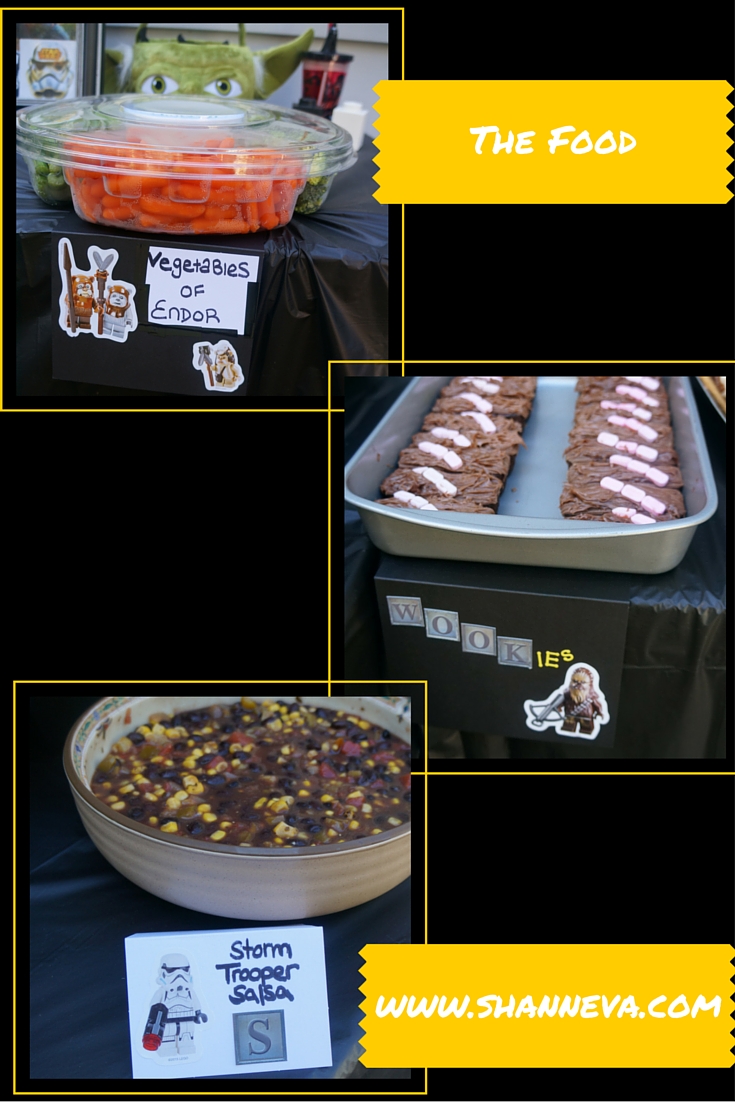 We had a veggie tray, which I named the Vegetables of Endor, complete with Ewok stickers. I also made Storm Trooper Salsa, which was a mild salsa combined with smoky canned corn, and seasoned black beans. Finally, there were Wookies, which were really Hostess Zingers covered with a little more frosting, and Pez candy as Chewbacca’s belt.

Here’s a look at the entire table: 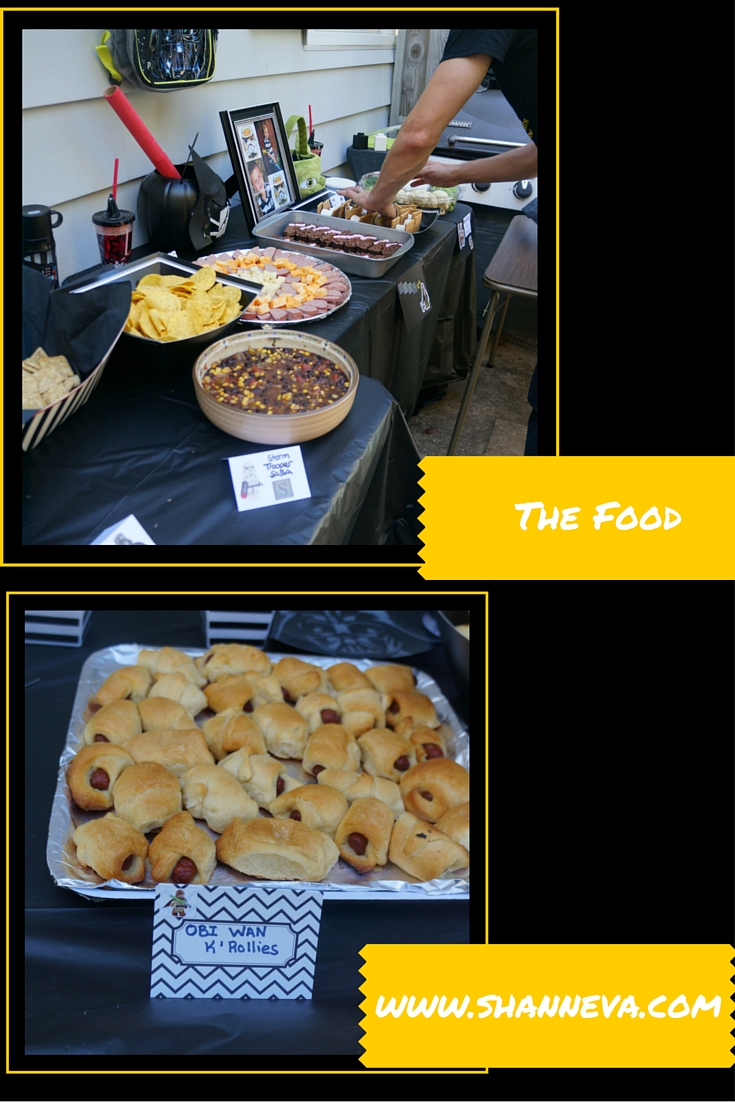 You can see that we also had a platter of meats and cheeses that we named the Death Star Deli Tray, and right in front are the Obi Wan K’Rollies, which are Lil Smokies wrapped in Crescent Rolls. You can’t really see them, and somehow I missed a picture, but my husband made TIE Fighters that we also found a couple of places on Pinterest. They were Graham Crackers with Marshmallow stuck between. We used a dark chocolate peanut butter spread to keep them together.

In addition to all the snack food, we then had Cake (you can read the story about how we almost didn’t have cake HERE.) We also had a Pinata, so the kids had candy too. Butter cream frosting plus candy equals time to go home with your parents everyone! Sorry Moms and Dads!

Actually, all the kids were really well-behaved, and I think everyone had a great time. I actually didn’t have to stress much, and could enjoy myself too, which was nice.

I’d like to share a little more about the party decorations and gift bags, but I’ll save it for another post. We’ve had a full couple days, and I’m exhausted.

Can you believe it’s already the middle of October? What fun things have you done this month? I’ll be doing a mid-month goal check-in soon. Plus, I’m going to share how we’re doing on our Fall Bucket List. Do you have a Fall Bucket List? Do you have your costume picked out for Halloween yet?