You are here: Home / Blog / The Tooth Fairy Makes Her First Appearance

We’ve been waiting for this day to come for a long, long time. Mr. B has FINALLY lost his first tooth!!!! And with that, the Tooth Fairy also made her first appearance this week! I’m so excited to share all about this milestone and more on this edition of First Fridays.

Mr. B is going to be 8-years-old on his next birthday and in the second grade, so I think he may be one of the last of his friends to lose a tooth. I was actually getting a little concerned, so I even asked the dentist about it at his last appointment. She assured me his teeth were there in his x-rays, but it didn’t look like he would be losing them any time soon because his adult teeth were pretty far down still. That was about 3 months ago.

In all fairness, he did get his teeth very late as a baby. He was well over a year before he had any…and no hair either! So, I guess late to get teeth, late to lose them? Also, late to worry about adult cavities and braces, so I’ll take that as a win.

Last week, Mr. B came up to me one afternoon super excited. He told me he thought he had a loose tooth. I couldn’t believe it, so I had to feel it for myself. It was really loose!!!

It wasn’t quite ready to come out, but he kept playing with it and pushing it with his tongue. It stayed in all day, and most of the next. Then, it was dinnertime. I don’t even think we were eating anything too hard, but all of a sudden, Mr. B exclaimed, “Hey! Is my tooth still there?”

In a panic we searched all around. He thought he might have swallowed it, and I could see the tears starting to come. Then, I also saw the tooth! It was just on the floor near where he was eating.

We took it and put it in a plastic bag, and Mr. B put it under his pillow. 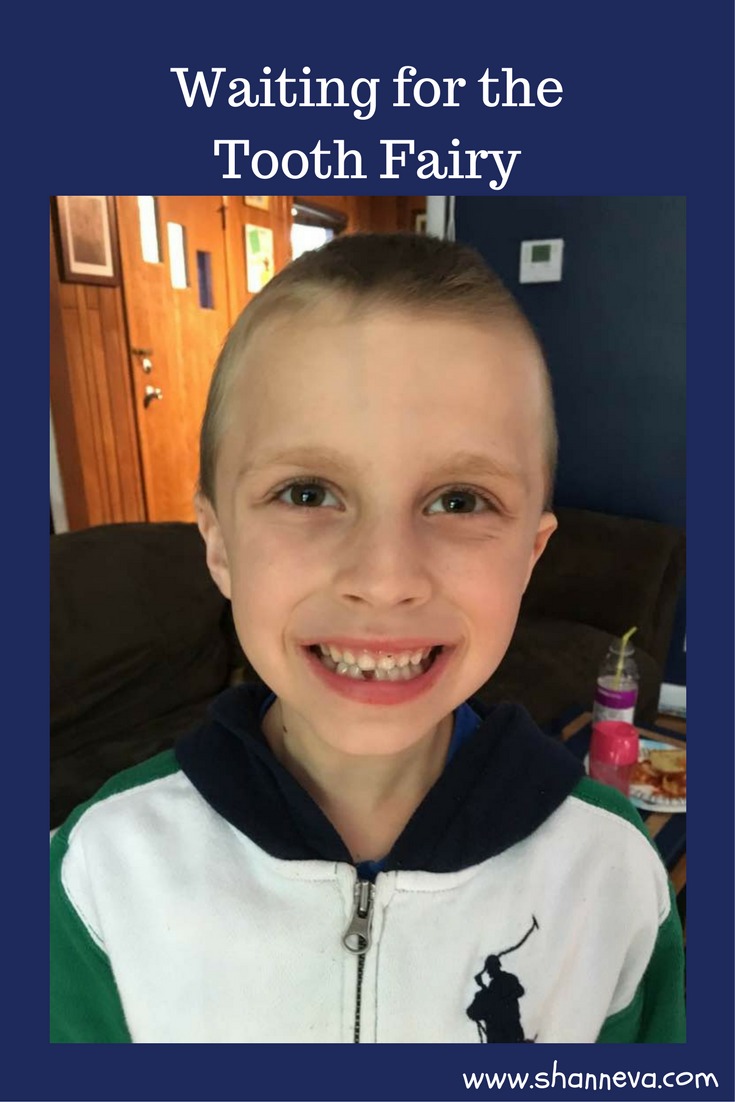 I was a little concerned with how the Tooth Fairy would manage to sneak it out and leave some money, but luckily, Mr. B is a very sound sleeper.

We also discussed what exactly Mr. B was expecting from the Tooth Fairy. He was wondering how many “dollars” he would get, and I reminded him that when we were young we only got a quarter. So, I think we managed his expectations, and he wasn’t too disappointed when he only received one dollar. I also reminded him that he has a LOT of teeth to go.

All week he’s been coming up to me say, “Hey Mom. Did you know I lost my tooth?!” with his big toothless grin. I think he’s still pretty happy about it.

If you don’t want to sneak under…or rather make the Tooth Fairy sneak under your child’s pillow, there are some really cute ideas for places to put your child’s tooth. There’s this cute box, this adorable pillow, and this awesome holder that glows in the dark.  I think we’ll be getting Mr. B the glow in the dark one for next time. I think we’ve got at least a year before his brothers lose any!

There’s also a great book, which helps explain why kid’s all get different amounts of money from the Tooth Fairy. Luckily, we had read it already, and had the talk about what to expect.

We wanted to do something to commemorate this milestone. So, we decided we would take Mr. B somewhere to celebrate. This would be a “brothers free” experience, so we could focus on him and how grown up he’s becoming.

Luckily, we had the perfect event.

We decided to take Mr. B to Summerfest. It’s an awesome festival at Milwaukee’s Lakefront filled with music, food, shopping, and great people-watching. While most people think of it as an event for adults, there’s also a lot to do with kids.

It can be very crowded, so I made sure Mr. B was dressed in a bright color to be easily spotted. I also pointed out Security and Summerfest volunteers, in case he got lost, he would know who was safe to go to. 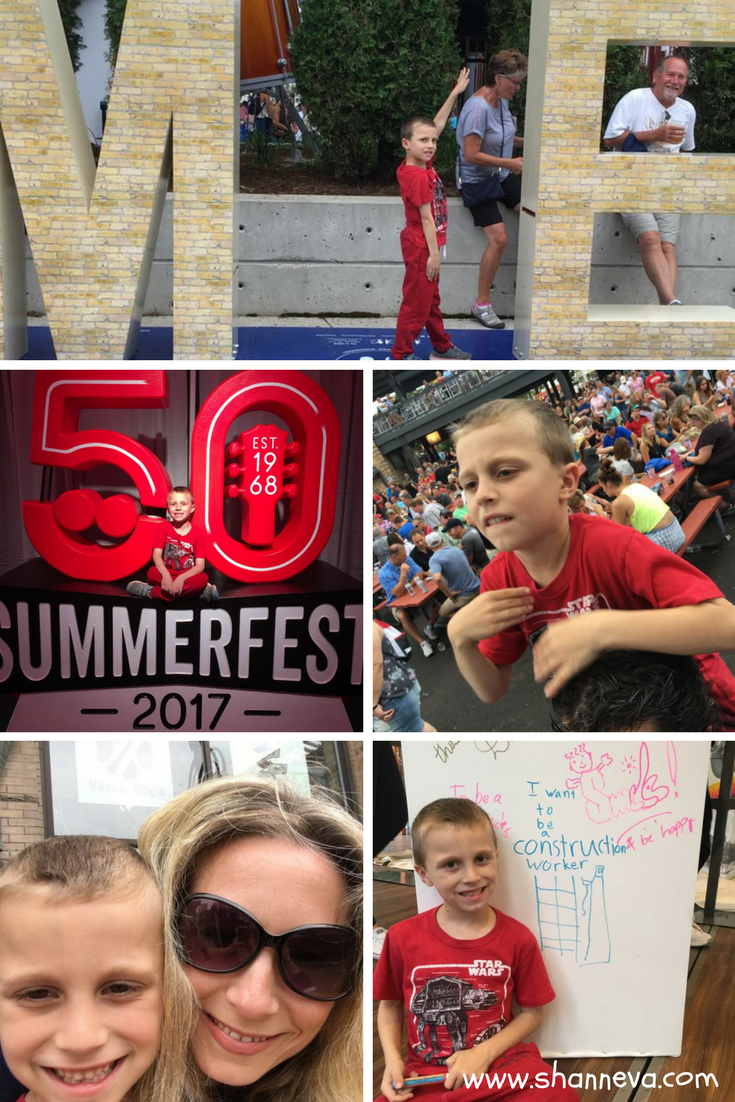 We ate a ton, walked a LOT, and enjoyed some music. We also went through the exhibit that shows all about Summerfest, since the Fest is celebrating its 50th year . Mr. B and my husband rode the sky glider twice, Mr. B did a few art projects at a kid’s exhibit, and we took a ton of pictures. We also ate dessert before we finally headed home. 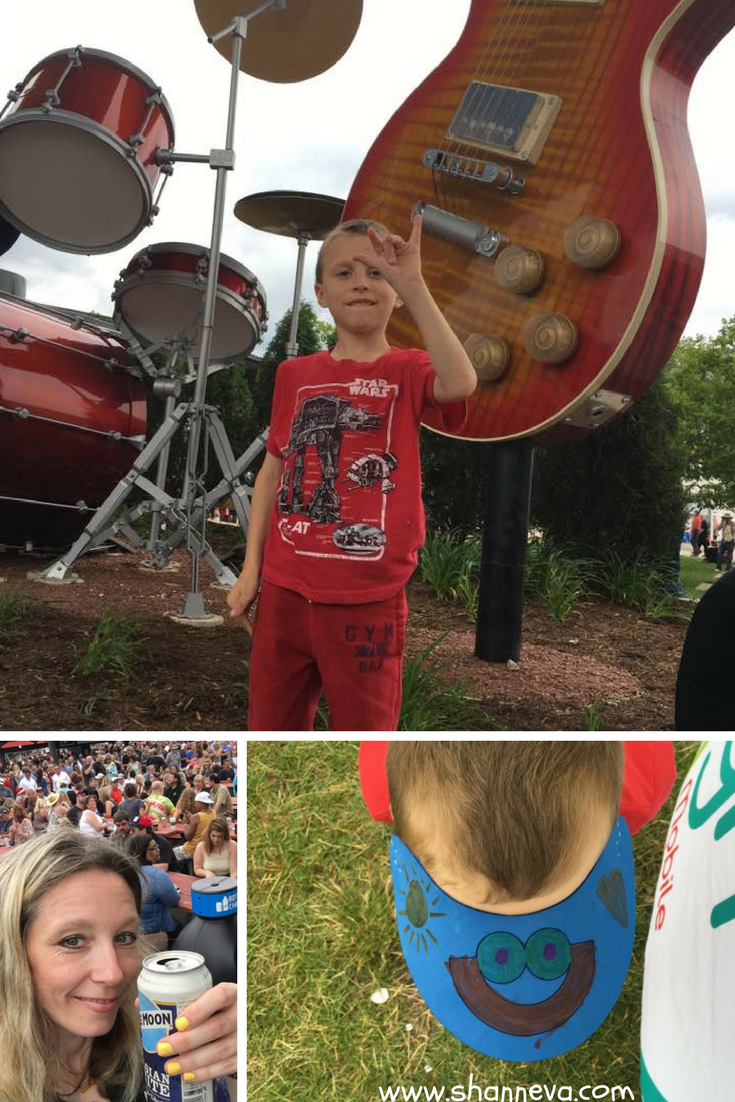 It was a really fun time, and a great way to make Mr. B feel special.

Losing a first tooth and taking his first trip to Summerfest were pretty exciting firsts this week! What summer fun did you have? What do you do to make your little one’s Tooth Fairy visit more fun? Let me know in the comments!