You are here: Home / Blog / Twice a Preemie Parent

Today’s Mom, Rachel, experienced a premature birth twice. While today’s post focuses mainly on her first daughter, I am still in awe of her strength and courage to go through the journey twice.  Of course, we would all do anything for our children, but as you will see, Rachel is truly a special mom, advocating and fighting for her children. 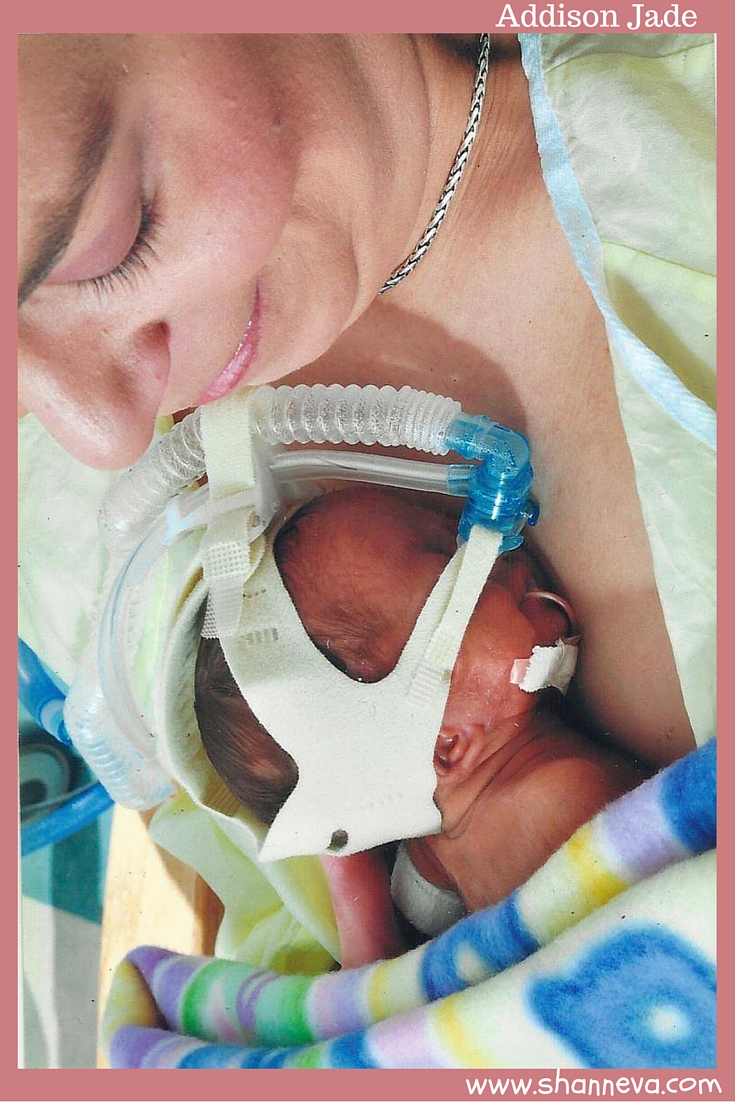 Addison decided to make her presence at 24 wks. 1lb9oz. It was around 7 pm, on 11/29/09. She came vaginally at around 7 minutes or so after
getting to hospital. My water had broken on the way. Once they had her stable, she was taken by helicopter to St John’s NICU in Springfield. It is about
45 minutes away from home. We did get to briefly see her before they transported her. 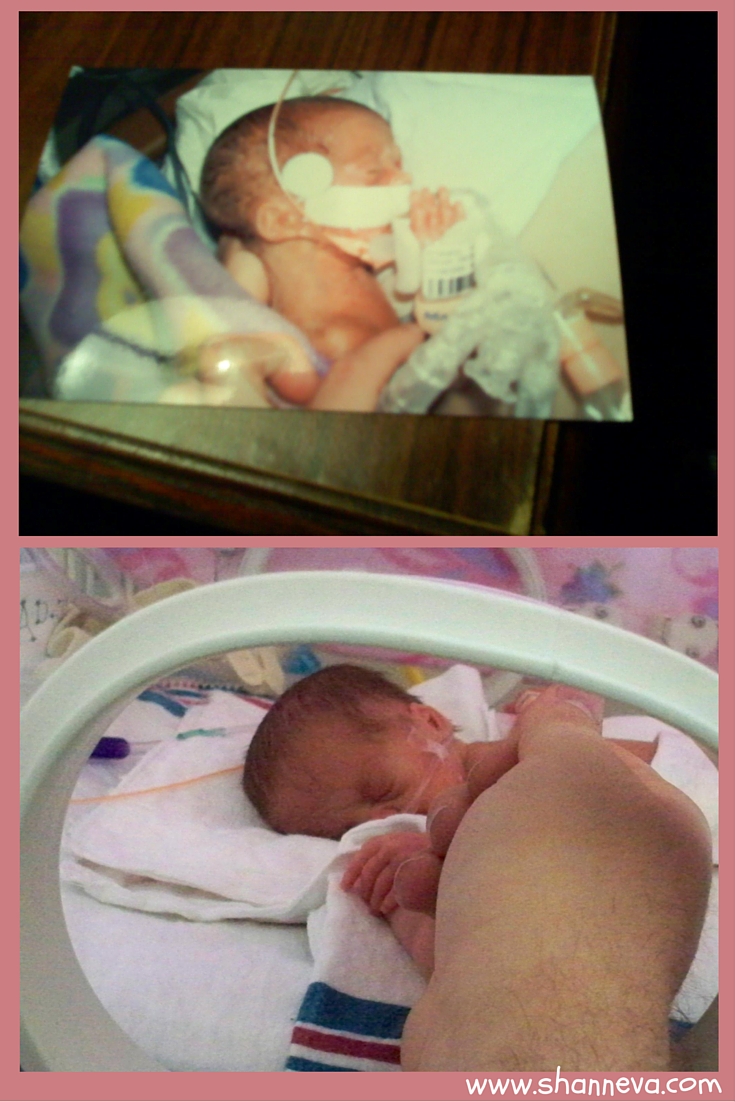 2.How long were you in the NICU? What was the hardest part?

We didn’t know at the time but we had a very long journey ahead. 100+days in the NICU. It would end up being about a week after her original due date in mid March. One of the hardest parts was not being able to hold her for a couple of months till she was strong enough to handle the Kangaroo Care (what skin-to-skin contact is called.) Also the back and forth while maintaining your personal life. We were 45 minutes away. We would take turns going so someone would be there at least some point during the day. I was scared all the time with it being so up and down. We met with the NICU team the next day as I was stuck in the hospital for myself that first night. We finally got released 1 pm the next day, and travelled up there as soon as we could. When
meeting with the head doctor we were told the grim outlook for our daughter. She had suffered a grade 2 bleed that night.

My mother, God bless her, went up there for us and stayed with her that first night, and knew when she had it. We were told what possibilities may face her but we’d have to get through that first couple days and the next few weeks and go from there. She was of course on Oxygen for a long time
and ended up coming home on it as well for a little while longer. She had a PDA open that they talked about doing surgery on. We were at the end of
one rotation of doctors and the next one decided to give her a little more time. Thank goodness to because ended up closing on its own. We just
really didn’t want her having surgery if she didn’t need it.

She continued to fight and grow and eat. Sundays were always a bad day for her. A few times I know she had to have help getting out of her spells. She was followed by physical therapy and ophthalmology, as she had ROP stage 1, I believe. That ended up being her first surgery and went very well, as now were only followed once or twice a year.

The first ultrasound we had with her we were told I had what they call a bicornuate uterus. Our doctor wasn’t or didn’t seem very concerned with
it at the time. Other than that, we went through the pregnancy fine until the day I delivered. I didn’t know I was in labor probably most of
the afternoon. We were supposed to be having Thanksgiving dinner and I was trying to hold off going to hospital. After awhile I couldn’t eat dinner
didn’t really feel well so went to lay down. I ended up throwing up, and decided we better go now. Luckily we did, as my water broke on the way to the
hospital. I was so scared we were going to lose her.

I knew it was way too early, and I knew the outlook would probably not be great. So after finally getting to hospital and getting through ER (once they realized I was only 24 wks and my water broke they rushed me upstairs to OB.) 7 minutes later she was here. She came so fast it was scary. When we had met with the NICU team and were discussing delivery one
had mentioned incompetent cervix. Turns out,  with our second child, I did have that. 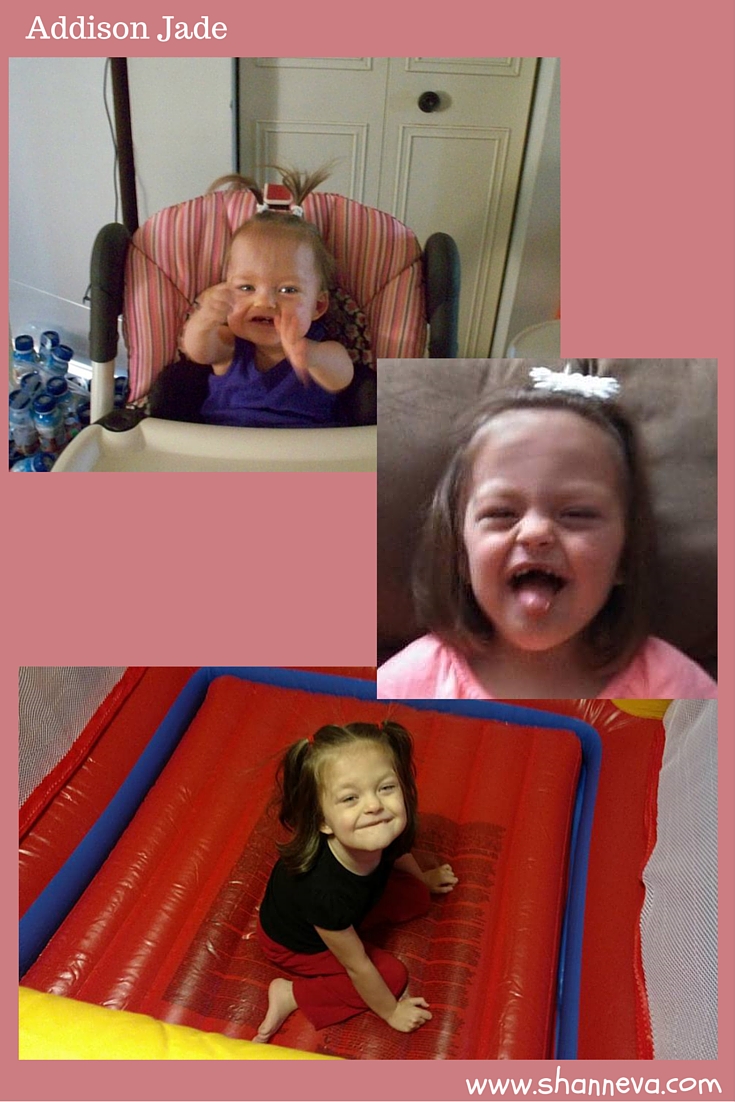 Addison is now a happy fairly healthy 6-year-old. She is mainstreamed for Kindergarten with a 1:1 aide. She does have diagnosis of
22q.11.2 deletion/DiGeorge, Cerebral Palsy, and speech delay (we think apraxia.) Addison doesn’t speak in words but her personality is very vibrant. We have a communication device (accent 1000 and IPAD.) She is starting to communicate that way better.

She stands a lot better with furniture or assistance, but doesn’t walk on her own. She is what we call our loosey goose. Upper strength is good, but lower is not.
We could not imagine our world without her. She came home on Oxygen for about another 3-4 months after nicu stay. We started EI therapy (physical therapy/occupational therapy/developmental therapy and speech.)

At age 3, she started school mainly for therapy needs. It was the scariest thing as we had only let grandparents or family
be around her. Addison had one hospital stay for pneumonia shortly after school probably because of immune system still not being caught up.
Otherwise minor colds/runny nose is about what we deal with through winter season. She started Hippotherapy last summer. And, she was in her first
special needs dance class as well. We used to do the Radio-thon
in November for our NICU now we are part of Dance-A-thon usually in spring. So we happily support CMN hopitals.

As far as for me? I’ve recovered for the most part. I still carry guilt and love for our NICU. They will forever be a major part of our
lives as Addison would not be here without them. We could never repay them. While the future is unknown, we will continue to advocate and do what
we can to make sure she has the best life possible. Addison really just wants to be a normal 6 yr old. I long to hear her voice and have a conversation with her or just know what she really wants or needs. I am starting to dabble into writing our story. Not sure what will come of it, if it will just be a keepsake for our kids, or publish it one day.

We ended up having another short NICU stay with our son Wyatt. He came at 31 weeks (3 lb 1 oz.) So we got to have a mini reunion with the NICU staff and
Addison got to go back and meet her little brother and some of the nurses. Not sure what she remembers of that time. I still stay in contact
some of the nurses. He only had a 30 day stay with minimal issues. He has had some once coming home but we continue to push forward and deal with
whatever comes our way. 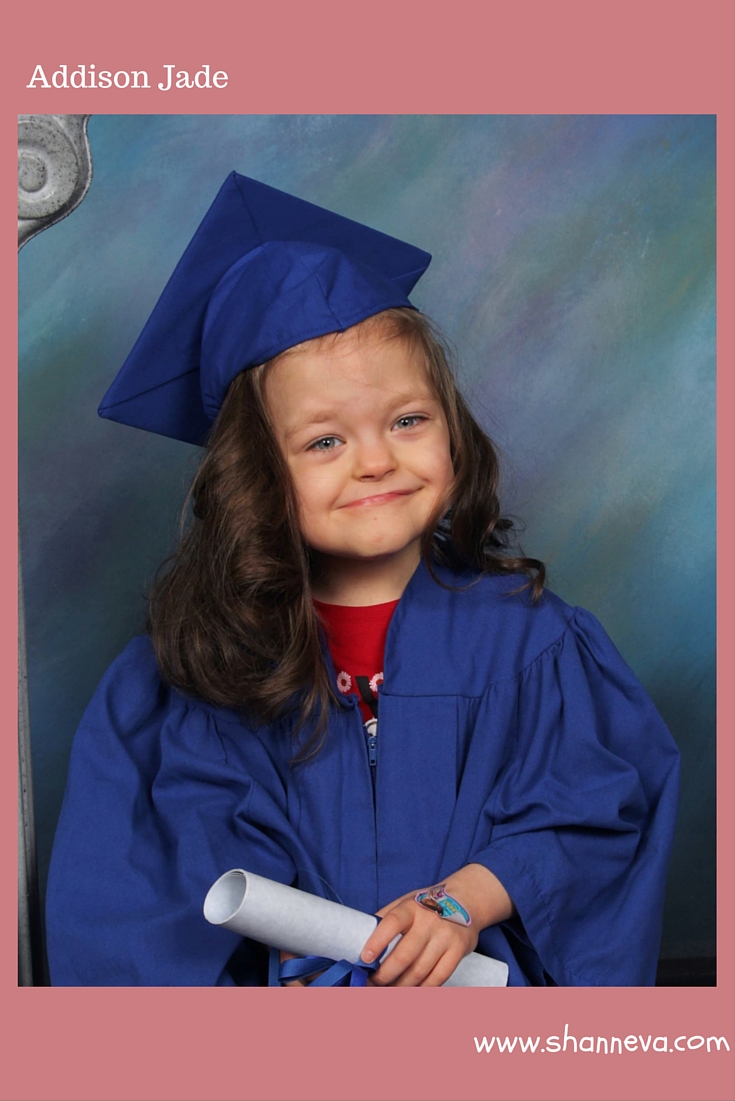 5.What advice would I give to a new preemie parent?

Take help when needed or ask for it. Don’t hold onto the guilt you may consume. Ask questions and learn the lingo. Keep a journal and take pictures. Read, talk, and hold your baby as much as you can. You will learn to advocate for them. Keep records. Fight for your baby. Do the best you can, and take care of yourself and time for yourself. Breathe! It will get
better and easier. Get into a support group but know that every baby is different. Do research but know what lies ahead for you and your baby. These babies are fighters and are resilient. Impossible is Nothing! Have faith and believe miracles happen.

Such great advice from Rachel. Also, such great strength shown by both Rachel and Addison. A preemie parent really is strong, but a preemie parent twice, could really be even harder on a person. I can tell that it only made Rachel stronger, and an even bigger advocate for both her children. I am looking forward to keeping up on the progress of this family.

Please leave any comments or words of support below.