You are here: Home / Blog / Vacation Regression: It’s Real and It Sucks!

What the heck is vacation regression? You know that struggle you’ve been having getting your kids back into a routine after winter break?  The “I don’t want to go to school” whines, the meltdowns and tantrums, the missed buses, and mishaps that happen when you go back to “real” life after the holidays?

Well, if you don’t, I’m going to tell you all about it today. The struggle over here is real, and vacation regression is in full-effect.

There’s been whining, there’s been crying, and there have been tantrums. Instead of each day getting easier, it seems that it gets a little worse. I’m going to explain why, and how I’m trying to fix it. 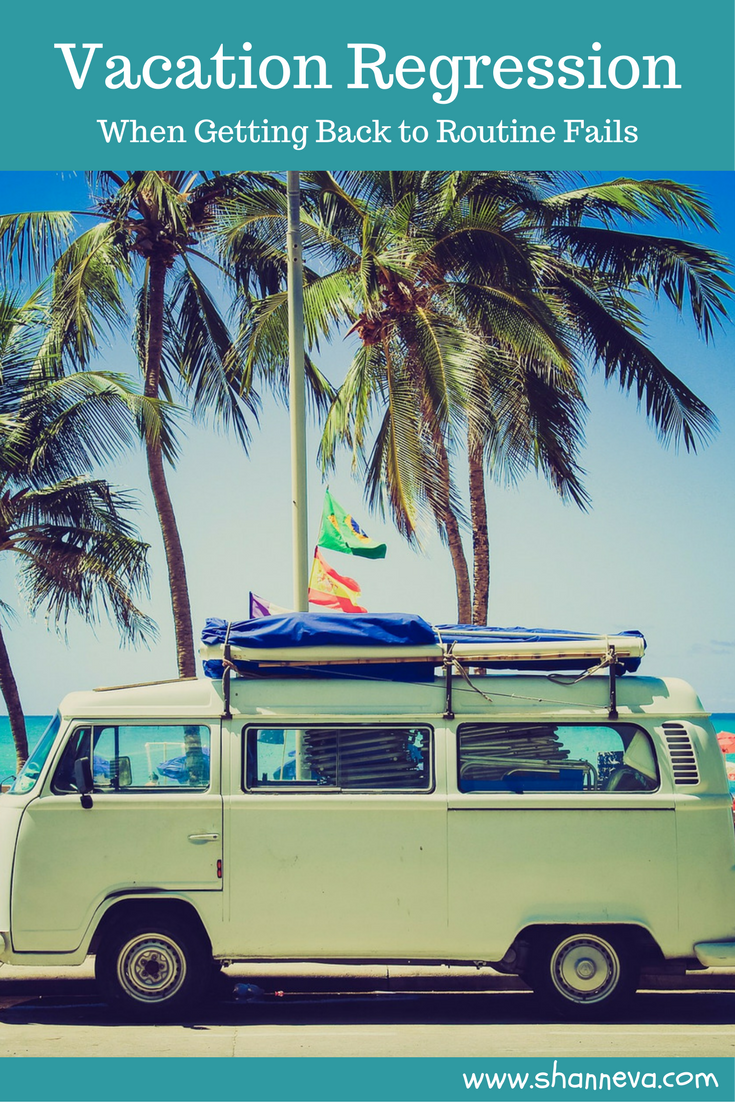 This year, we had a pretty short Christmas break. Since the holiday fell on a Monday, with New Year’s also falling on a Monday, the kids only had a little over a week off. For me, it was plenty of time.

Them? Not so much.

The whining about going back to school started around Friday of last week.

The boys were all sick of their new toys, sick of each other, and sick of being cooped up in the house. It’s record low temperatures in Wisconsin, so it’s not much fun to venture outside, but it also makes you go a little stir crazy.

I was so sick of the arguing and fighting, that I said I was happy that school started again soon.

Little P didn’t realize he was going back to school ever again, Mr. B thought he had a lot longer break like last year, and Big C just whined because his brothers were doing it.

Now, I was really glad they were going back!

But, I tried to distract them. We took a trip to the mall, Mr. B got to stay at his Grandma’s house for the night, and I tried to get them excited about New Year’s Eve.

All seemed to settle down.

After staying up late for New Year’s Eve, it was hard to get everyone to go to sleep at a reasonable time the night before school. I really think one extra day of vacation might have worked in our favor for that part.

So, even though they were in bed on time, no one actually went to sleep early. I heard talking, playing, and general nonsense until way too late.

And when we stay up late? We, of course, get up super early.

However, even though they were cranky and hard to motivate, I still got everyone to eat, get dressed, and on the bus with relatively few problems. Surprisingly, Big C was a little teary getting on the bus saying that he would miss me. (I thought it Little P would be the problem!) I just hugged him, and put him on the bus before he had time to even think about it.

That first day, I didn’t get any emails or calls from teachers, and everyone got off the bus smiling. They had snacks, told me a little about school, and watched a little TV to relax.

Not so bad after all, right? Wrong.

Little did I know, vacation regression was about to get worse.

How it started to unravel

Again, bedtime was a nightmare. Talking and playing went on for way too long. Threats were made, doors were closed, and finally all was quiet.

It started with Mr. C getting upset as I was getting on his coat.

He then decided his tummy hurt, and had to go to the bathroom. This, of course, is when the bus decided to come.

I ordered Mr. B to run to the bus and tell the driver to wait. Little P didn’t want to leave without his brother, but I could see this bathroom situation wasn’t going to end anytime soon.

I sent him to the bus, and he kept looking back in confusion. Luckily, he got on, and then it pulled away.

A little wrench in my plans to workout, but no big deal. I would just wait for Big C to go, and drop him off.

He started crying and worrying that he would have an accident at school. This happened once early in the school year when his tummy hurt, so he was afraid it would happen again.

He did go to the bathroom (twice,) so I assured him it would be OK. I also told him that he had extra clothes just in case, and that everyone has accidents sometimes.

It was go time.

I wanted to get to school before Little P freaked out and noticed his brother wasn’t there.

Still worrying about an accident, Big C started crying about how much he was going to miss me. I could feel the anxiety all coming back in him.

So, I just kept assuring him it would be fine, he would see me soon, and any accidents would be OK. I was firm about him going to school, though.

I walked him in, and he just kept saying he would miss me. We got to his locker, put his stuff away, and then the tears started coming. So, I walked him inside, and told his teacher why we were late. I also said hi to Little P, who was starting to tear up because his brother was crying.

His teacher tried to distract him by asking him to show me where he sat on the carpet.

It was full on meltdown mode by this point, but I walked him to the rug, and sat as the rest of the class sang good morning to me.

I then had to rip myself away from him, kiss Little P, and get the heck out of there.

The guilt was overwhelming, but I knew if I didn’t leave then, I would just end up taking him with me. That wouldn’t have been good for anyone.

Again, coming home was fine. Everyone was happy, hungry, and chatty. (I had also emailed the teacher as soon as I left, and she sent an update saying they were fine at school.)

But, again, bedtime was not fun, plus the twins woke up around 2 am, and wanted in our bed.

I got them settled, and then, of course, couldn’t sleep. They also managed to wake up big brother, but he, luckily, went back to sleep.

So, cranky mom, another teary/anxious Big C, and 2 other sleepy boys made for another hectic morning.

As we were getting on coats, the bus arrived.

Again, I sent Mr. B to the bus, and then Little P.

Only now, he wasn’t having it. He was not getting on without his brother.

I sent Big C out, but he was crying and refused to move from the front porch. So, in my pajamas, I ran and got my boots, grabbed both of their hands, and raced to the bus before it could leave without them.

I had to physically lift a hysterical child onto the bus steps and push him up. I gave him one last hug, and told him he needed to sit down.

I then raced inside, and had a good cry myself.

So, it’s finally Friday, and while I didn’t have to lift Big C into the bus today, he was still crying when he got on. He also managed to finally shake Mr. B, and he brokedown crying and saying he would miss me. Little P just wanted everyone to stop crying.

I tried deep breaths, talked them through how much fun their day would be, and told them I would miss them too. I even resorted to bribery of Happy Meals for dinner if they would stop crying.

But, they all are at school now, and even though my heart hurts, I know it’s for the best. If I gave in and let them stay home, how would we ever beat this vacation regression? How will we ever get back to the routine?

Even though it’s the weekend, I am planning on early bedtimes for all three. They need sleep, and lots of it.

I’m also going to try to spend as much quality time with them as I can. Maybe I can get them so sick of me they’ll be begging to go to school?

Probably not, but at this point, I’m going to try everything.

Since I have anxiety myself, I know it’s just going to take time for Big C. Anxiety seems to come in waves for me, and it appears that’s how it works for him too. So, we just have to wait it out, and I need to be as patient as I can.

I’m also going to try to find an activity for Spring Break, so this doesn’t happen again. If we can keep somewhat of a routine together, maybe it won’t be such a shock to their little systems.

I truly can’t take another round of vacation regression.

Are you having vacation regression in your household? How do you handle it when your kids don’t want to go to school? Any and all suggestions welcome!