You are here: Home / Blog / Blame is not the answer, Scarlett’s Story

When you experience a premature birth, it’s so hard not to blame yourself, as the mother. Mothers are supposed to be able to protect their children from anything, even before they are born. Sometimes, though, you just can’t. It is not in your power, and it is a really hard situation to be in.

I always second guessed everything I did during my pregnancy, and wondered if anything I’d done would have made a difference. Should I have rested more? Made healthier food choices? The questions were endless.

Even though I did blame myself during my pregnancy, and for a long time after, I now realize it wasn’t my fault. It wasn’t even my body’s fault. It’s just something that happened, and there is no reason why it happened to me or to any other mother who has a premature birth.

No matter what the condition or outcome of your pregnancy, you are not to blame.

Today’s mother, Courtney, also went through this journey of blame and acceptance. Please read about her and her sweet baby, Scarlett.

Our little angel’s name is Scarlett Elizabeth. She was born at 27+1 weeks, weighing 930 grams, or 2 pounds exactly. The day she was born started out with me going to work, followed by my 6 month check up. I left the doctor’s office with a note to go on sick leave due to high blood pressure and an immediate request to have a stress test at the hospital I was to give birth at. Within 5 hours, I was on a magnesium drip with a blood pressure reading of 220/115. I didn’t feel any symptoms of high blood pressure, and ,in fact, I felt 100% fine. Just bloated. I was transferred to a level 3+ hospital in downtown Toronto.

At first, the high risk doctor said I would be able to go another 48 hours to make sure the steroid injections worked at making her lungs grow. I was in line to get 4 shots. They did an ultrasound and it was determined that she had to come out now. After that it was a fluster of commotion. I saw doctor after doctor, who all had a very important part in her success. I was so scared. I hadn’t had this happen with my first….and I just kept thinking what did I do wrong to make this happen? The doctors didn’t know at first why this happened. 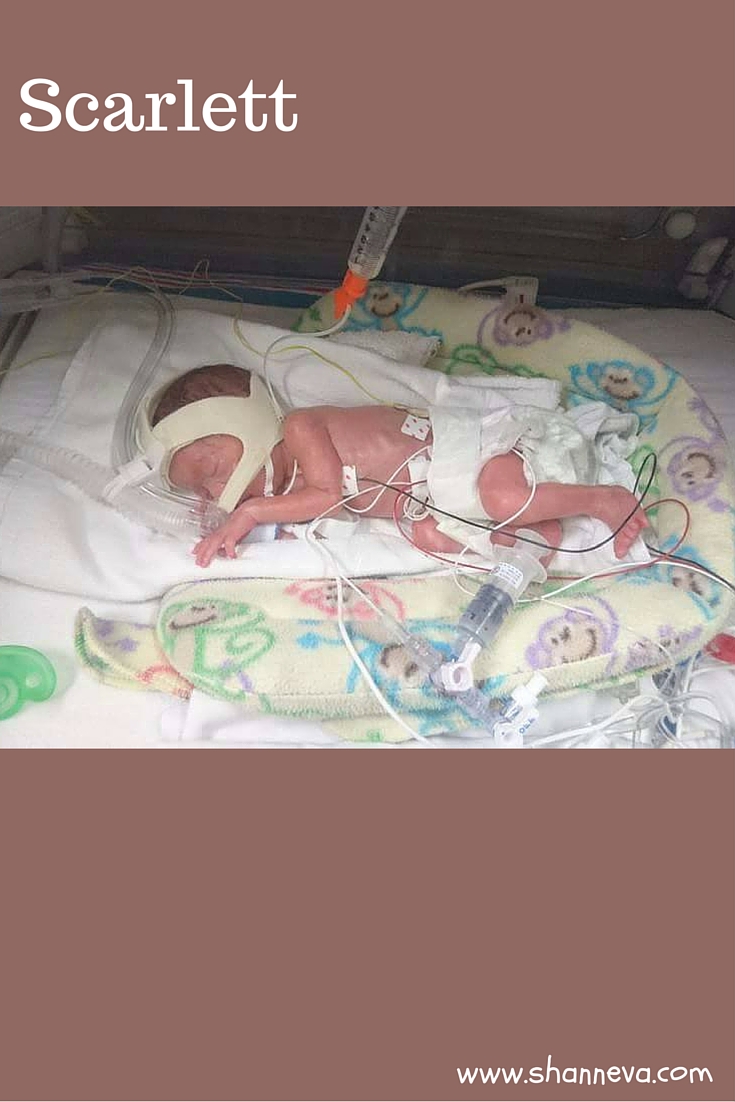 When Scarlett came out, she cried right away. That was such a relief! We were warned that oxygen was a certain part of our future, and in total for her whole stay in the NICU, she was on it for 12 hours. She was on a high flow cocktail to keep her lungs open so they wouldn’t touch….and she very frequently would get her teeny tiny fingers into her tubes and pull them out.

While in the hospital, Scarlett’s blood sugar was so low that she was on a sugar cocktail until it mellowed out. They had to add fortifier to my breast milk.

Our stay began on February 2nd, 2016, and we spent 63 days in the NICU. In order to keep my composure during this time, I shut myself down. The only thing that mattered was Scarlett and my husband and son. I wouldn’t consider it Postpartum Depression (I never had thoughts or feelings about harming anyone,) but I couldn’t focus on anything but them, and her in particular. The NICU is a tough ride. When you take a step forward, like coming off her mask for 30 minutes at a time, and then all of a sudden she starts to suffer from breathing spells, you can’t help but feel defeated. It made it hard.

One of the hardest parts was making time for our 5-year-old son. We had to commute at least 3 hours every day just to see her, so my parents helped a lot with our son. When he finally got to hold her, he exploded in smiles and that made the long days that much more worth it. 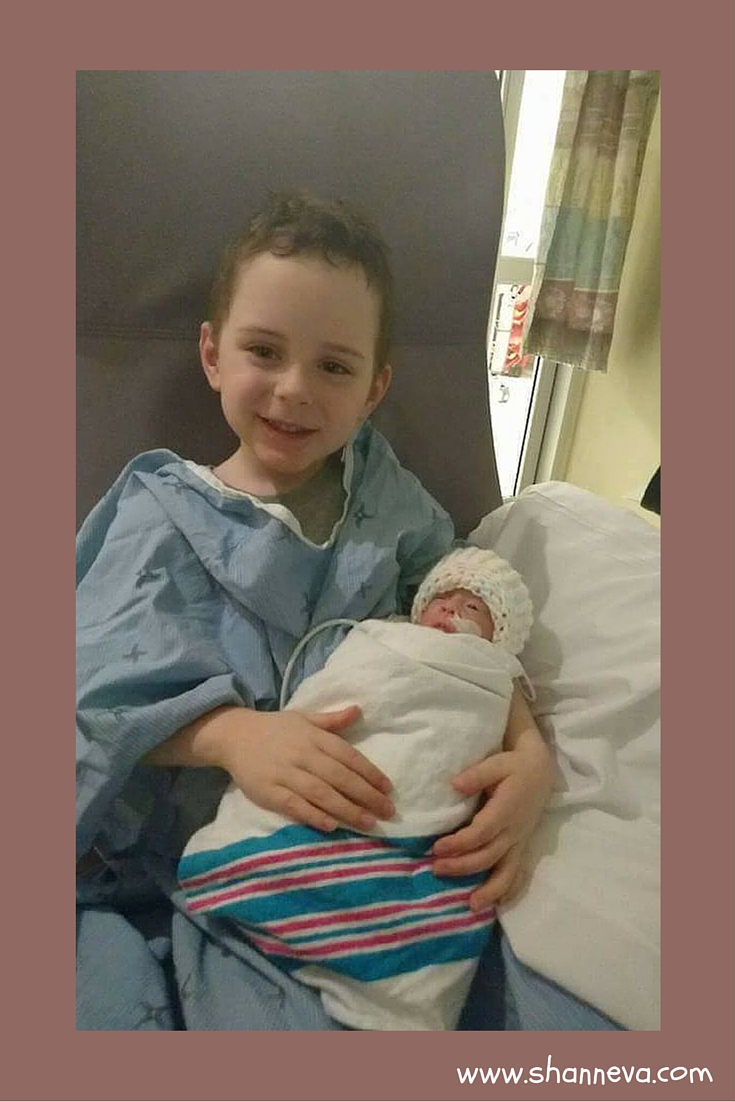 After a while the doctors were able to pinpoint what went wrong. Apparently, her placenta was releasing toxins into my body which elevated my blood pressure. The preeclampsia was just a natural progression for me. The swelling was so bad the nurses couldn’t find my veins anymore.

Scarlett was released on April 4th at 36 weeks gestation. We had been transferred to a lower level hospital 3 weeks prior, and it was to learn how to feed and grow. Within 6 days of being there, she was drinking 60 mls every other feed from a bottle, and she powered through learning how to feed each feed like that. Since she’s been home, she has thrived. At 6 months old (3 months corrected,) she is 15 pounds and doing really well at tummy time. She’s trying to crawl so much, and she can shimmy herself around in a circle. She’s smiling and laughing, and it’s like the first 3 months never happened. 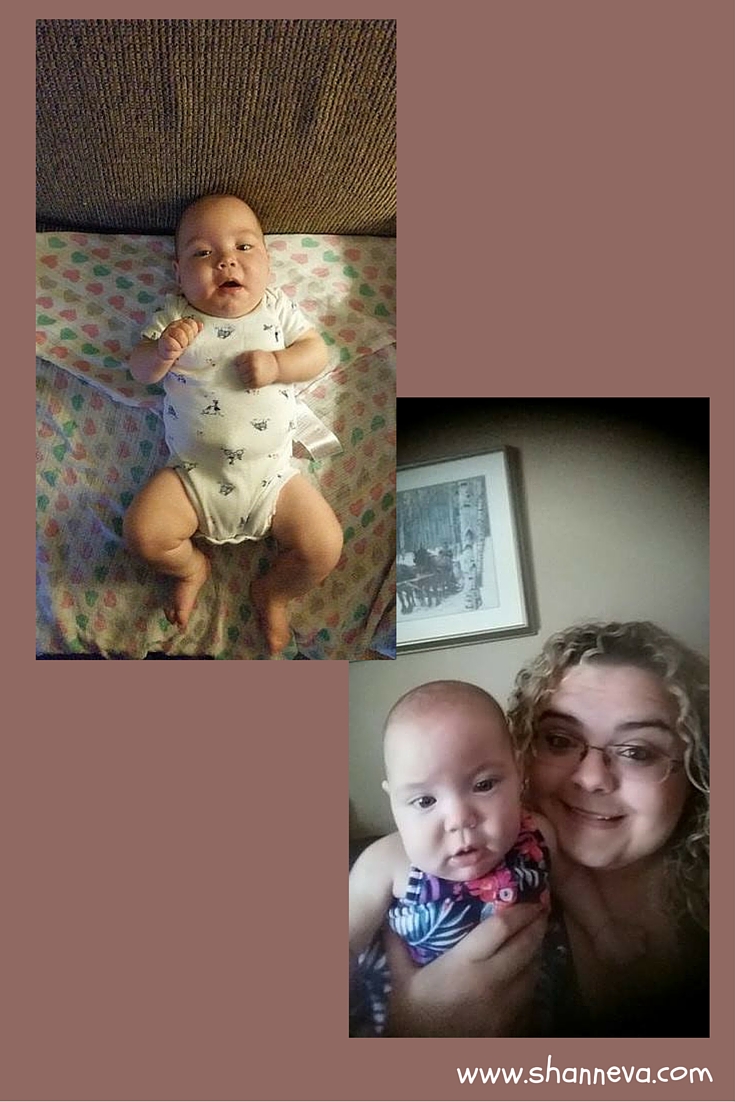 5. What advice do you have for new Preemie Parents?

The main advice I have for new preemie parents is trust the nurses. You’re going to get frustrated, and you’re going to get angry at why the nurses won’t let you hold them or change something about their care. But trust me, that doesn’t help anybody. The nurses and doctors are there to help your little one succeed and grow, and you will go home eventually.  Until you go, your routine will be all messed up. But it will happen.

The other advice is DON’T BLAME YOURSELF. There are situations that are not in your control and most times can not be prevented. If you can’t make it one day, it’s okay. The nurses are there and will answer your one phone call or 10 phone calls. This time will pass, and you will have your little one at home with you soon.

Thank you so much to Courtney for sharing beautiful Scarlett with us. She offers some great advice to all of us NICU moms out there. Please leave her and her family supportive comments below.