While I usually introduce you to a preemie every Monday, today’s post is a little different. Not every baby that experiences the NICU is a preemie, but it doesn’t make the journey any less difficult. No matter what gestation, a baby in the NICU is very sick or is having a serious problem. Today, you will meet a sweet girl who survived Gastroschisis .

Gastroschisis is a very serious condition, and surgery is needed right after birth. Any type of surgery on a newborn carries great risks, so you can imagine the fear a family must go through when they find out their baby is affected by this. 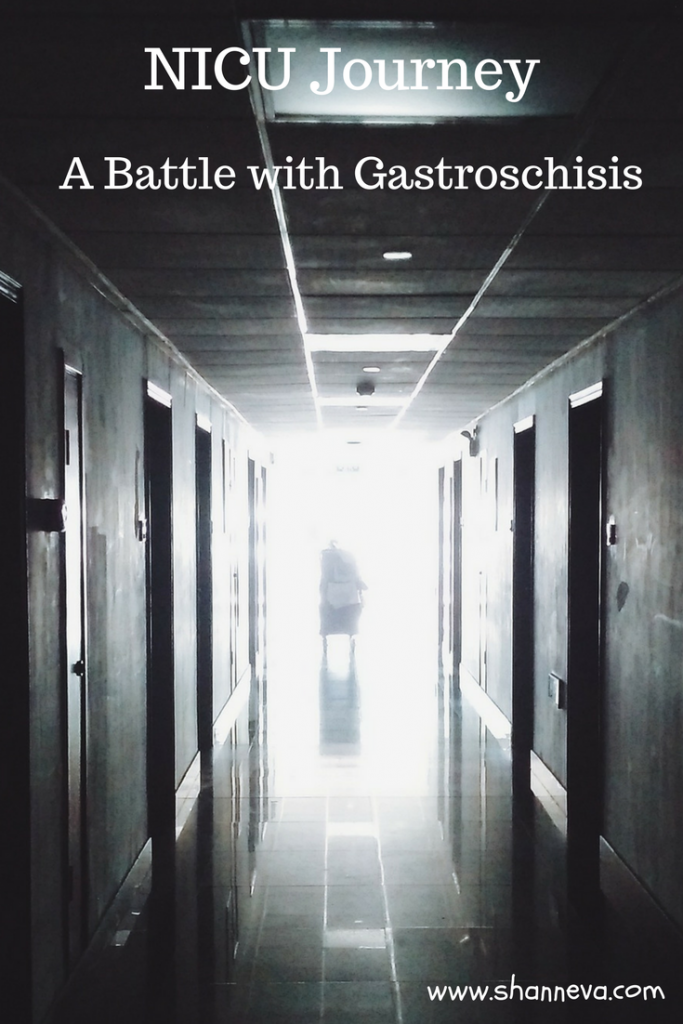 I’m so honored to be sharing Aubree Jean’s story with you today, as told by her mom, Shauna.

Aubree Jean was born at 36 Weeks 3 days and weighed 4 pounds 9 ounces. Crazily enough, although small, she was one of the biggest babies in her nursery.

However, Aubree was born with a condition called Gastroschisis. What this means is that’s Aubree’s “insides” were on the outside of her body.

Although learning about this condition early on in our pregnancy, my husband and I were terrified each time we had an ultrasound. We were never sure if it was going to be a good day or a bad day for our daughter. You see, if her bowel were to have any dilation or twists or lack of circulation, we would have serious problems that could lead to very early delivery or worse.

We knew that we had to make it as far along as we could for Aubree to survive and for her to have a successful surgery.

On August 5th, we had to go to the hospital for a non stress test (which had reached 2x a week by this point) and sadly Aubree failed the test, and we were admitted to the hospital that day. However, doctors wanted me to receive steroid shots over the next 48 hours in order to boost Aubree’s lung development and to have a full surgical staff on duty.

Thankfully, after some sweet talking to our little girl, she perked up, and we were able to wait the nerve wrecking 48 hour period.

August 7th, 2017 at 9:10am she was born, and almost immediately went to surgery to have her bowel placed. We were fortunate enough that we got to see her face and my husband was able to take a quick picture of her and then the NICU and surgical team were off.

Prior to her surgery, the pediatric surgeon came into the recovery room with us to discuss the possible outcome. He had said she was very small and told us that all of her bowel, part of her liver, stomach and bladder were all outside of the body and she was going to possibly need a silo and have multiple surgeries to have everything placed back where it needed to go.

After what seemed like forever (less than 2 hours), Aubree’s surgeon came in and told us the most amazing news. He was able to put everything back in place in ONE surgery!

Our NICU stay was 33 days long.

During that time the hardest part was to watch her struggle to get her stomach to digest the bile that our bodies produce. She had what is called a replogle placed down her throat into her stomach to suck the bile out until her stomach could do it on its own. This part is where it got tricky because it was literally a roller coaster of a ride and a “trial and error” so to say.

Aubree had the replogle removed and put back three times, and every time I cried and cried and cried. To watch her not be able to do something that we all do so easily broke my heart.

Finally, her surgeon had said “let’s let her prove herself” and the third time the replogle was taken out was the last time it was taken out. She all of a sudden had a switch go off in her mind that said she was tired of being in the hospital, and she wanted to go home with her mommy and daddy. 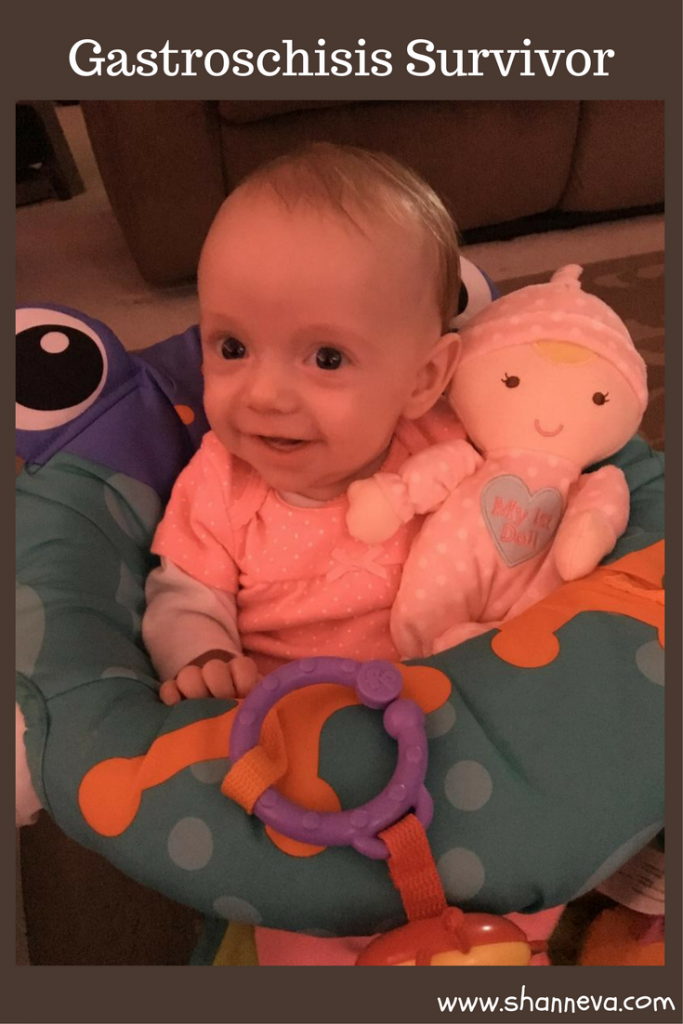 3.Do you know what caused Aubree’s condition?

This was my first pregnancy, and both my husband and I’s first child. I am in my late 20’s, I work out, I’m healthy, I eat right, I felt like I did it all “the right way.”  Yet, Aubree still had gastroschisis and sadly, there really is no conclusive evidence that says what causes this condition.

Researchers say it is more commonly found in young (teenage to early 20’s) women, African-American women and drug and alcohol abusers… and I was none of these. They also have tried to say that possibly the medicine Zofran, which is used for nausea, can cause this. However, again, that didn’t apply to me.

Aubree is doing amazing now. She is 3 1/2 months old and by looking at her, you would never even know anything was wrong. She eats, poops, giggles and smiles just like any other baby, and is one of the most pleasant little girls I’ve ever encountered.

This affected our family tremendously, as it grew the three of us so much closer than I ever thought possible. My husband and I worked together to do everything we could to encourage and be there for our daughter. We were there all day, every day, until Aubree was ready to come home.

Thankfully, our families helped us along the way as well. Something this stressful can be difficult to overcome, but we did it and we came out stronger than ever.

As far as we know now, there are no more follow-up appointments for her gastroschisis. She eats great and is gaining weight like she should be. She is even off of the preemie scale now and is on the normal percentile height and weight scales.

5. What advice would you give to a new NICU family?

The best advice I would give to a NICU family is prayer and to be there as much as you can without burning yourself out.

Also, take the help when people offer, take the meals, the visits, the hugs, the phone calls. Your friends and family are there to support you while you care for and support your beautiful child.

If there was any question I could’ve asked prior to our NICU stay it would have been, “How do you make it through the journey and be strong for your child when you are struggling to be strong yourself?” A NICU nurse once told me on a day I was struggling… “yes, your baby is here for a reason, she’s a preemie and she had this condition and for some reason the lord wanted her to arrive sooner than expected BUT you get to watch this miracle he created grow in front of your very eyes.” At that moment for some reason it all got a little better and the NICU stay wasn’t so unbearable. I had to accept the fact that she needed to be there in order to survive and she would come home when she was ready.

For anyone going through this similar situation the Avery’s Angels Foundation is a great place to connect with people who have been through it. It also gives you information on the condition and helps you as a parent understand your journey as well.

Thank you so much to Shauna for sharing sweet Aubree with us. Please leave any supportive comments or questions below.