You are here: Home / Blog / Health and Development Updates

It has been a busy, messy, busy, tiring, long week and a half. And it’s not over by a long shot. Since I told you about our Preschool Problems, I wanted to share some development updates. I also have a health update for my oldest. 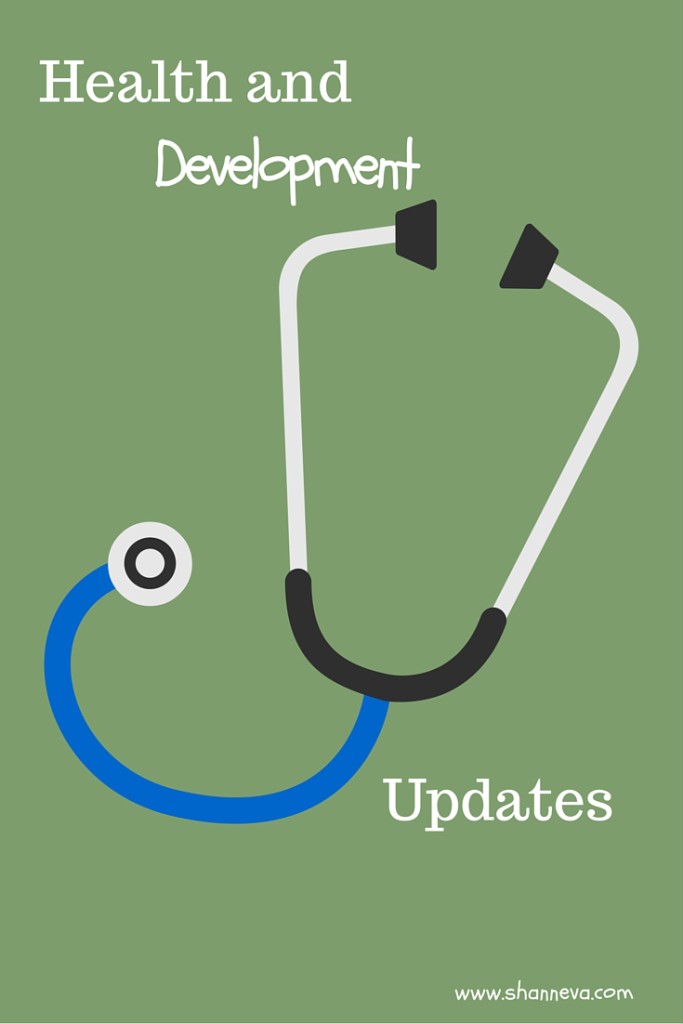 First, I thought I’d start out with development updates for the twins.

As you know, we met with a speech therapist a couple of weeks ago. If you missed that post, you can read about our visit HERE. Last week Friday, we met with the rest of the development team, which included an Occupational therapist, a Physical therapist, and a behavior specialist. I filled out forms for both boys, then left them to play with the three professionals.

The Good News: They listened, they tried to do everything that was asked of them, and are on track for mostly everything. Hooray! (Although, where are those sweet, listeners at home?)

The Bad News: Where do we go from here? There was some concern over fine motor skills, but they are unable to offer any services unless they need more than one therapy. There was another Speech therapist there, and she agreed that we can re-check in a few months, but she thought they sounded fine.

They recommended they go to a preschool that emphasizes play rather than academics, which I am all for. However, we still have the hurdle of potty training to get over before that can happen. So, we are in a bit of a holding pattern.

My oldest has been having ear trouble for a while. It started with a string of ear infections, followed by a failed hearing test at school. His regular doctor referred us to an ENT (Ear Nose and Throat Specialist,) in December. He saw fluid in his ear, but no infection, so he wanted to wait and see before putting in tubes. He also had us set up an appointment with an audiologist.

He hasn’t had another ear infection since that appointment, so we went to the audiologist last week to make sure his hearing is OK. It wasn’t.

The fluid is still there, and he has hearing loss in his left ear because of it. She wants us to go back to the ENT for a follow-up. Appointment made.

In the meantime, and totally unrelated, he woke me in the middle of the night on Monday. He had thrown up all over his bed. Yuck.

I cleaned him up, changed him, and put him in our bed. After about a half hour, he realized he wasn’t done and didn’t quite make it into the bucket I brought in. So, I wiped up the bed, nudged my husband, who had his ear plugs in, and told him we were headed to the couch. And not to roll to my side of the bed.

By the morning, he said he felt fine and wanted to go to school. I figured it was something he ate.

He did fine all day, but didn’t really eat much when he got home. He did drink a LOT of water. Too fast. Luckily, this time he gave me warning and made it to the garbage can I had lined up just in case. The rest of the night was spent on the couch, he slept through the night, and felt fine again the next morning. His appetite wasn’t completely back, however, when he told me he ate a cupcake at school, I knew he was completely fine.

I’ve almost caught up with the laundry, started the online auction (come bid HERE) and have been prepping to teach my first dance class. Mommy will need a hot shower, glass of wine and a few chocolates on Sunday.

How’s your week been?