You are here: Home / Blog / School Decisions for Twins: What Preschool Taught Us

School decisions are hard for any parent. No matter what choices you make, you want to do what’s best for your children. You want them to have the best learning experience in the right environment. When it comes to twins, those school decisions also include choosing to keep them in the same classroom or separating them.

How do you decide? How do you know what’s best for your twins? 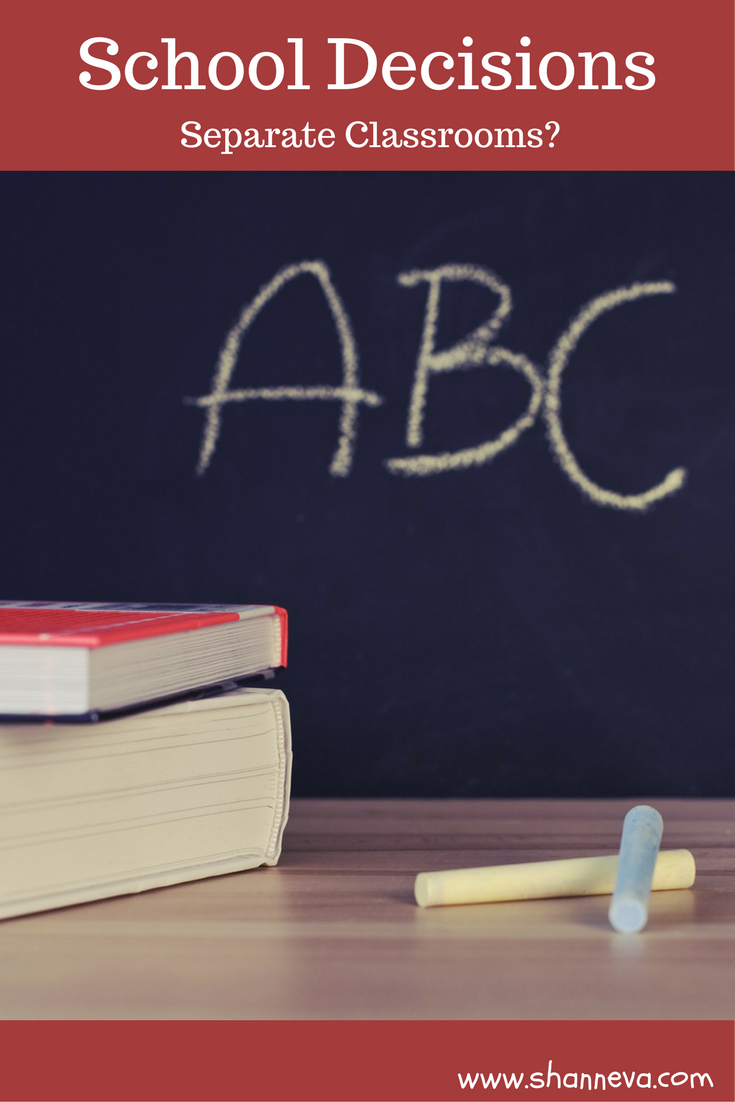 With any parenting decision, there’s always an element of trial and error. Do any of us really know what we’re doing? Well, I certainly will admit that I don’t. Every day I make decisions and hope for the best. Sometimes things turn out great, and sometimes I make mistakes.

Luckily, kids are pretty resilient. They can adapt to many different situations, and are very forgiving when we make mistakes.

Going into school for the first time, we debated what we should do for our boys. We made what we thought was the best decision at the time when it came to preschool, and it has informed our decisions about kindergarten.

When it came to preschool last year, we decided on separate classrooms for the boys. There were many reasons behind this decision:

So, did it work? Was it the best decision for our boys? Yes and no. We learned a lot, and overall, they had a good experience.

Here are the good things that came out of separating the twins for preschool:

And the challenges from separating them:

The Biggest Lesson from our School Decisions

While the boys were well-behaved in separate classrooms, they really missed each other. They also were not as comfortable or as excited as when they would go to activities together.

At their teacher conference, we learned something very concerning. Big C was very quiet, and Little P didn’t talk. At all.

I looked at their teachers in disbelief. Were we talking about the same twins? My boys who I have to tell to be quiet about 50 times a day because they are so loud or talking instead of sleeping?

Little P’s teacher said that he was a great listener, did everything she asked, but would not talk. He would sometimes go up and whisper to her, but otherwise, he would just smile and nod. She also said he was very “easy-going” and never got upset. Even if someone took his toys.

At home, Little P is a screamer. If he gets frustrated, you will know it. I’ve never heard him whisper. I thought he only had one volume…LOUD.

Big C’s teacher said that he was just very quiet, and didn’t say anything unless asked.

At home, this is definitely not the case. Seriously, neither of them stop talking unless they are sleeping or really into watching a train show. I really couldn’t believe it, and we had to get to the bottom of what was happening.

While we were in the conference, the boys were playing in the basement with the head of the school. She also knew they were both quiet in class, so she asked them why. They were both very talkative and engaged with her.

Awe. My heart just sank. What had we done by separating them?

To make sure that was all it really was, we also had them evaluated by a Speech Pathologist, Behavior Specialist, Physical Therapist, and Occupational Therapist through their school district. They did qualify for services because they have trouble with a few sounds, but the Speech Pathologist didn’t think his lack of communicating in school was the result of any underlying behavioral issue. He spoke with her when they were one-on-one, and with all of the specialists.

So, from that point, even though we kept them in their separate classrooms, the teachers let them go into each others’ classrooms every once in a while. They played outside together sometimes, and went in for storytime at other times.

If Little P seemed upset about going to school in the morning, we told him that he could start off in Big C’s classroom. The school was really great about making accommodations.

It was at this point that they also started speech therapy, physical therapy, and occupational therapy through the school district and got an IEP, Individual Education Plan. They did all therapy together…and loved it. 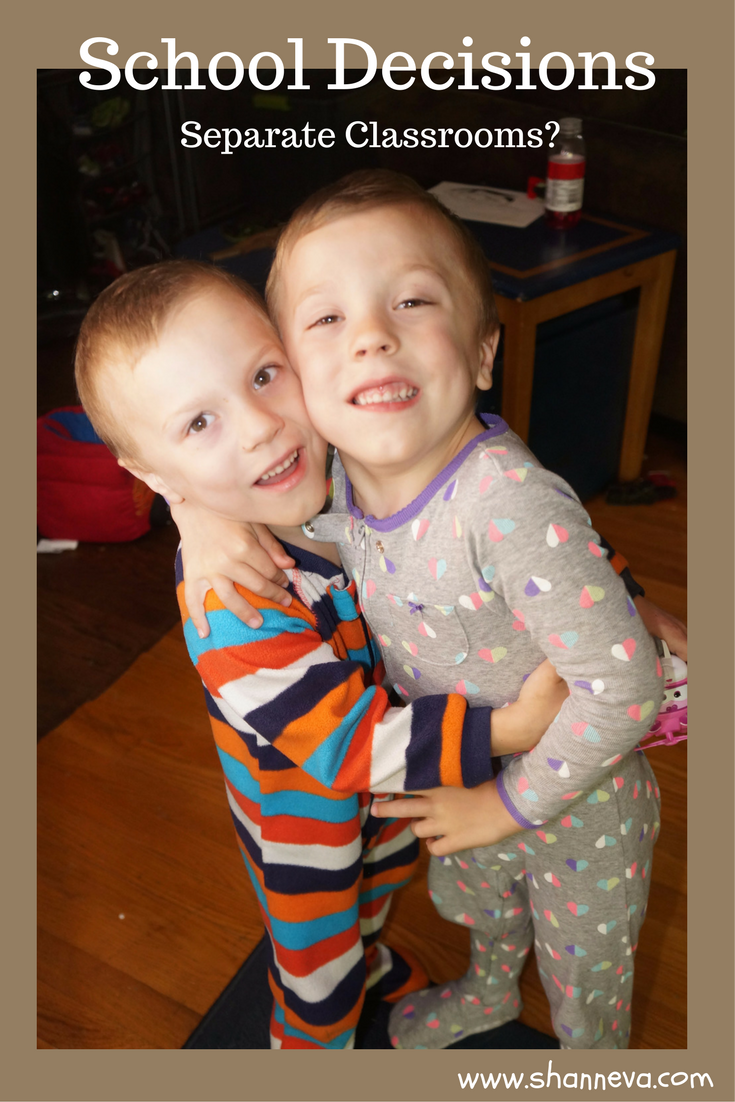 While I’m glad we separated them, their happiness and comfort is my main concern for this next milestone.

It will be a big change going to summer school every day, since they were only in preschool twice a week for a few hours. If being together makes this transition easier, I’m all for it. I want them to be happy and excited about going to school, not scared or sad.

I’m no longer afraid about Big C taking over for Little P. I think they are able to be more like themselves when they are together because that’s what they are used to. They may fight or compete with each other, but they might do that with other students too. It’s kindergarten, and we can’t expect them to be perfect all the time. Or even most of the time.

I don’t feel the need to push them outside of their comfort zone at 5-years-old.

While putting them in the same classroom for summer and kindergarten is the right choice right now, it may not be the case the following year. I will be checking in with their teachers, and also letting their behavior guide any future school decisions. I also want them to have a say in what happens as they get older.

They definitely have the opportunity to be on their own at our school. Each grade in our school has 4 or 5 sections.

Because our school is very large, they will have chances to be separated within the classroom. If their teacher chooses to separate them in the classroom, that’s totally OK. I think they’ll still be comforted having their brother in the same room. They often play by themselves while in the same room at home.

I’m very glad that we separated them early and found out how they reacted. While it was challenging, I think it was good to have that separation, since they had never experienced it before. It was a great learning experience for all of us.

Man, this parenting stuff is hard.

So, how about you? What has been your biggest parenting challenge lately? If you have twins, what has worked best for them when it comes to school decisions? I’d love to hear your thoughts in the comments below.