As a parent, you question your judgement constantly. Well, at least I do. How do you know when you’re making the right decision? What if you don’t? How will this impact my kids? My family? All of these questions have been on repeat in my mind since we started discussing the twins repeating kindergarten.

It wasn’t a decision we came to lightly, and it wasn’t without support. So, let me walk you through our process on how we made our final decision. 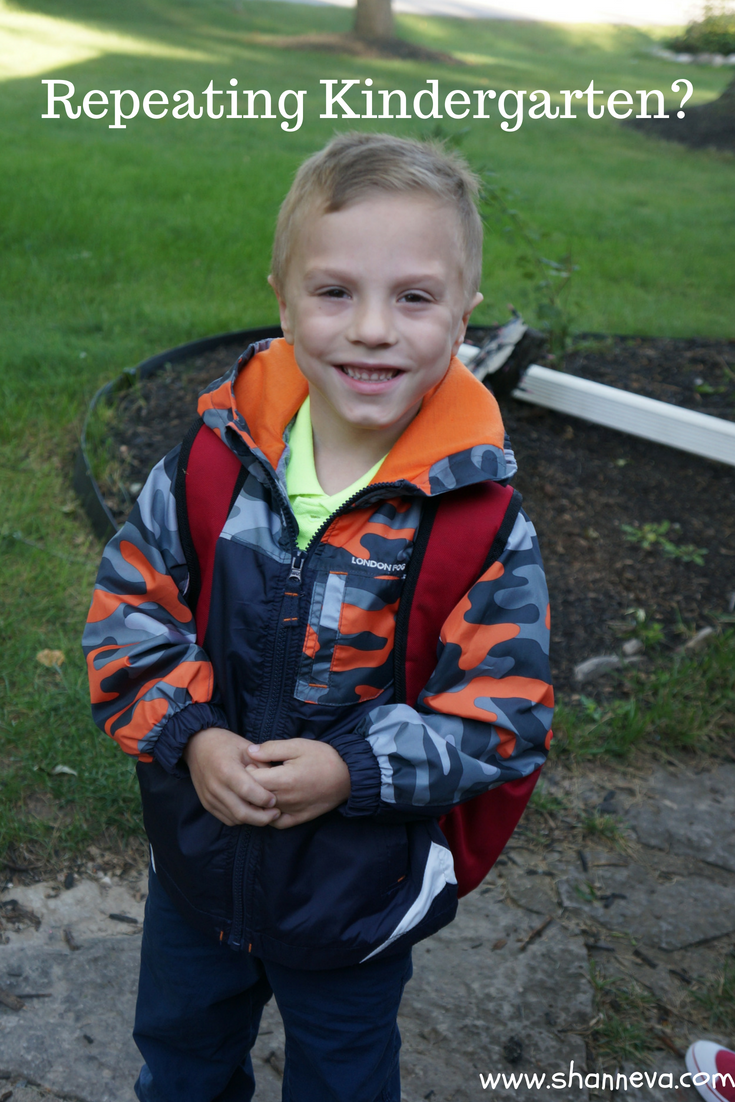 Research and school decisions for the twins have been happening for the last two years. It’s been stressful and challenging, but I think we’ve finally made it to the right place.

I’ve read articles, joined discussion groups, talked to teachers, administrators, and counselors. School is not something I take lightly because it is just so important. Not only are the twins learning academic skills that they need in life, but they are also learning the social skills that are so critical to their happiness.

In many of the articles I read, retention, or repeating a grade, was not looked upon with much support. They gave statistics and numbers about how it didn’t set the children up for success later in their academic careers.

However, every person that I’ve talked to in real life has never regretted their decision to have their child repeat a grade. This is especially true at the kindergarten level.

It was a really tough decision to send them to kindergarten in the first place last year.  If they had been born when they were supposed to, they would have August birthdays. We would have almost definitely held them back.

But, they were born in May.

There are differing thoughts on adjusted versus actual age in the preemie world, but most doctors believe kids have caught up by the time they are three years old. The twins’ doctor felt as if they were caught up and developing with their actual age.

They had done a preschool program, and they had received speech/OT/PT services through the school district.  We then put them in a kindergarten readiness program for the summer. If they did well, we were going to go ahead and send them. If not, we were going to do another year of preschool or something else.

By the end of the 6 week program, they were doing great. Their teacher told us they were keeping up with their classmates, and there weren’t any major issues.

I’m not going to lie. It would have been a huge financial burden to send them to another year of preschool. Our district does not have a free program, and 4K for two children is expensive. While I wish money wasn’t a factor in our decision, we did have to consider how it would affect the whole family, as well.

So, off to kindergarten it was.

There weren’t any major problems at the beginning of the school year. The twins seemed to enjoy school, although they would come home completely exhausted and cranky. It was a rough transition to full days of school, but I figured that was a common occurrence.

Their teacher was amazing, and kept me in the loop on everything that was happening.

By the time of the first teacher conference, the twins seemed to be doing OK. They were still getting speech, physical, and occupational therapy. We also had an IEP, Individual Education Plan, in place for both of them. This allowed us and their teachers to make special accommodations for the help that they needed. Both boys still had sounds they couldn’t produce, had weak core muscles, and needed more strength and dexterity in their hands and fingers.

They seemed to be keeping pace academically, but Little P was still very quiet in class.

Then, things changed. The novelty wore off, and they realized this was part of their every day life. They were no longer excited to go to school everyday, but wanted to stay home. There were messages about tears at school.

First, it was my Little P. He was frustrated with things he couldn’t do, and couldn’t (or wouldn’t) communicate what was wrong. He got so upset at one point, he held his breath and almost fainted.

It would be small things, like not being able to open his water bottle, not being able to zip his jacket, or having to sit in a special seat because he was so small. He hated being different or asking for help.

Then, after Christmas break, it was Big C. Being home for a week seemed to trigger his separation anxiety. He didn’t want to get on the bus in the morning, and would start crying. When I would volunteer in art class, he would get teary when I left.

He was constantly afraid I wouldn’t come to volunteer time at school, or he would get lost from his brother during the day.

We had meetings and emails.

They made Little P a chart that he could just point to, so they could figure out what was wrong, if he was crying and wouldn’t talk.

As for school work, it was still OK. They enjoyed being read to, and also liked to figure out reading. They were making improvements in Math, but we never were able to do homework when they got home at the end of the day. They were too worn out.

As it neared the end of the school year, and their annual IEP meeting, I began to get really nervous.

How could they move on to first grade when they couldn’t emotionally handle kindergarten?

While they liked the kids in their class, and talked about them, they didn’t really form relationships. We didn’t have play-dates. They were too emotional and wild when they got home from school to even think about having anyone else over.

I wanted them to love going to school, not fear it. I wanted to set them up for success, not frustration.

I went to their IEP meeting armed with facts and reasons why they should repeat kindergarten. I was ready for a fight, as I had heard our district doesn’t normally allow retention. I just couldn’t picture my babies moving to first grade when they had so much they needed to work on in kindergarten.

We went through all of their IEP first, covering their Speech therapy needs, continued Occupational therapy needs, and their improvement in Physical Therapy.

Then, it was time for the big decision.

To my surprise and relief, there was no fight. There was support from their kindergarten teacher, from the school administrator, and school psychologist. They all agreed it was a special circumstance, and we needed to do whatever we could to help them succeed.

They didn’t want to see my boys struggle. Pushing them forward would be a mistake. 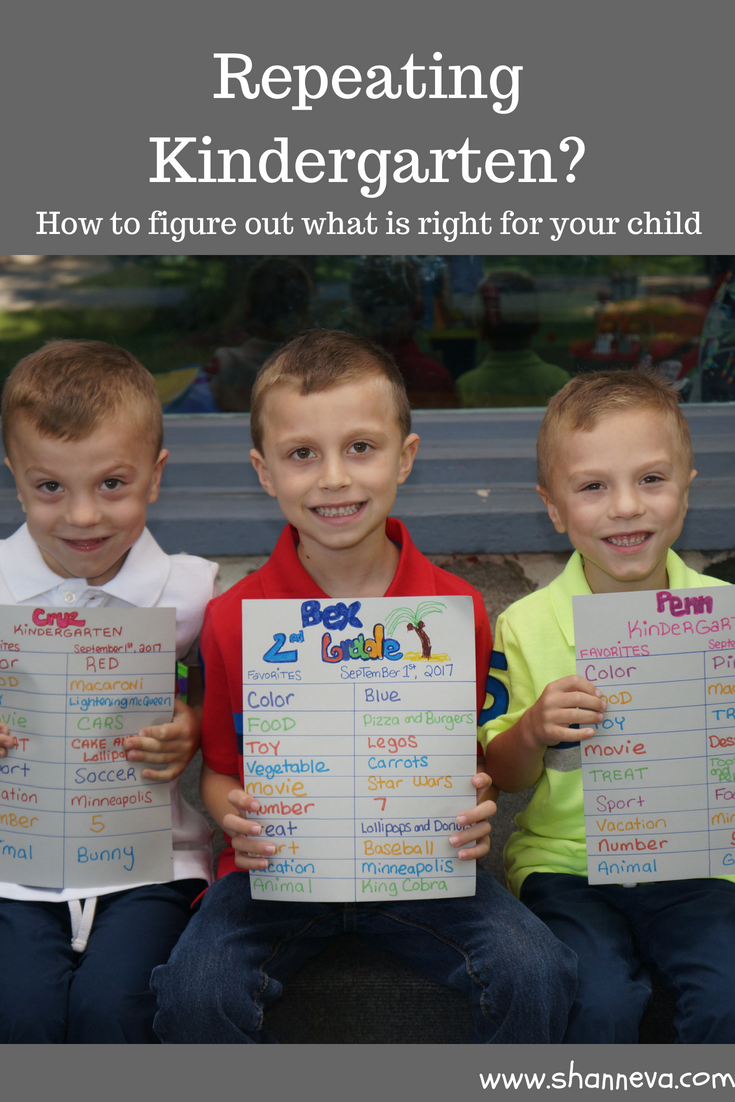 So, here we are. School starts in about a week. We are actually meeting their new teacher today.

I’m still nervous, but I know we made the right decision. I do not regret putting them in kindergarten because they learned and grew so much. While they struggled a lot, they also made progress. If they would have done another year of preschool, I’m not sure they would have been prepared for kindergarten this year. I think it’s going to be really good for them. They will have more of an academic background, so they can concentrate on the emotional aspects and relationships.

I also learned a lot, including that I need to trust my mommy instincts.