You are here: Home / Blog / The Secret of the Nap and Bedtime routines

Oh, the nap. How I love thee. I don’t want to jinx myself, but I think I’ve finally cracked the napping puzzle.

In case you don’t remember, ever since the twins transitioned into toddler beds, nap time has been sheer torture.  It usually ends up with some yelling, screaming, and lots of crying.  The crying is mostly from me.  I am not ready for them to give up their nap, and they really are not ready either.  If they don’t take a nap, they are super cranky in the hours that lead up to bedtime.  This leads to super cranky mommy, and a dad that wishes he’d stayed at work.

So, this is the plan I’ve been following for the last week with about a 90% success rate. 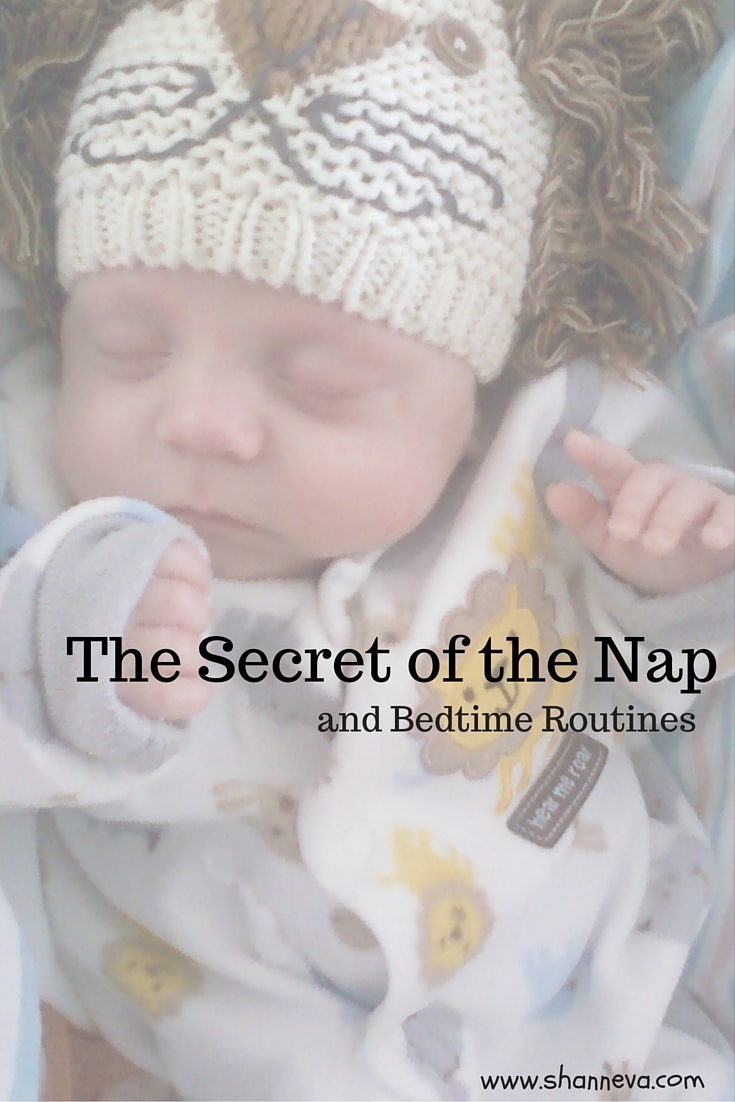 After lunch, I change my little guy’s diaper, and put him in his bed.  He’s usually pretty good, and doesn’t fight me, when he goes in alone.  I leave him in his room by himself for a good 10 minutes, so he gets nice and sleepy.

In the meantime, my oldest and big guy are watching a little TV.  I then change big guy’s diaper, and start telling him it’s nap time.  I either let him play with his trains (without his brother stealing any) or just let him sit in my lap and watch with his brother.  After 10 minutes, I go and take him to the room.

By this time, little guy is too sleepy to jump out of his bed and bug his brother.  This was the main problem before.  He would get out, run and jump in his brother’s bed or steal his toys and blankets.  Big guy doesn’t get out of his bed often, so I do our night-time routine (more on this later,) and he goes to sleep.

Aaaah.  Peace and quiet for about an hour.  It’s not as long as they used to nap in their cribs, but I’ll take it.  About once a week I can also get my oldest to lay down, so mommy may or may not take a nap too.  Otherwise, I can finally get some work done because my oldest usually plays Legos or watches one of his shows.  Or I can eat lunch without sharing.

Now, about that bedtime routine…I think we’ve created a bit of a situation here.  It all started when I bought them this moon*:

It super cool.  It comes with a remote, and goes through the phases of the moon.  You can even program it.  However, the boys just like it as a Full Moon.  All. The. Time.

So, turning the full moon on is step one.  Step two, is turning the Hello Kitty* on.  This:

And the third step is turning the Turtle* on.  This:

After all the night lights are on, it is time to brush teeth.  Then, we must put cream on their faces.  (The cream started because they have chapped cheeks from this beautiful, dry Wisconsin winter.)

And finally it’s time for the super annoying music. I’ve tried to change the CD a number of times, but they always seem to want the same one.

If your toddlers don’t have a favorite yet, I highly recommend starting with either of these instead.

Here is the problem.

These night lights only stay on for about 20 minutes.  My little guy doesn’t really care if they go off, BUT the big guy goes ballistic if they turn off before he falls asleep.  And by ballistic, I mean he screams for MOON or KITTY or TURTLE at the top of his lungs and cries and carries on until someone comes in  to turn them on.  By that time, he is also in need of a tissue because he has “notty nose” from crying, then needs his “creamy” re-applied.

Also, the CD eventually runs out too. Can you guess what happens if someone is still awake and there is no music?!

This is the situation.  We’ve created a bedtime monster.  But at least we have a routine?

Do you have a routine for Bedtime? Or nap time? Tell me your secrets!

*These are the actual products we use, love, and fight over.  If you would like to purchase, simply click on the picture, and it will take you through my affiliate link for Amazon.  If you purchase through my link, I do receive some compensation. Like pennies. But still, thank you.