You are here: Home / Blog / Spinning Class; My first time for “Try it Tuesday”

I may be way late to the party, but I’ve never taken a spinning class before.

Don’t get me wrong, I love taking classes at the gym. Boot camp, weight lifting, Zumba, and Barre class are just a few of my favorites. But a spinning class? I’ve always been a little intimidated to try it. The dark room, the thought of biking for an entire class, and those uncomfortable bike seats. Plus, I wasn’t really sure if I’d get a full body workout.

My normal Monday class is on a bit of a break, since the teacher just had a baby, so I was looking for a new class to try. A friend, who I take several classes with, suggested I try the spinning class. She said she got a great workout, was super sweaty by the end, and the instructor is great.

What did I have to lose? 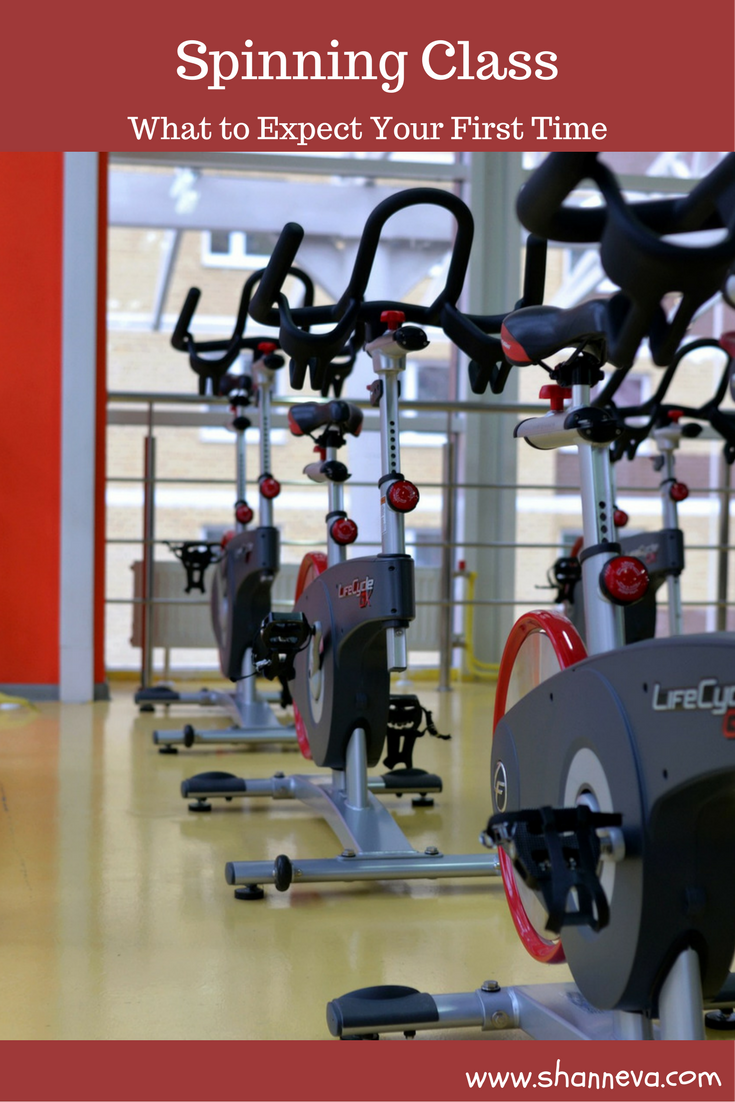 You don’t need any specific equipment for a spin class, although they do make special shoes if it’s something you do a lot. My friend suggested a towel and a water bottle, so that’s all I brought with me. I just wore my normal workout outfit of black pants and a tank top.

I also made sure to arrive 15 minutes early. The spin classroom isn’t very big, so it fills up fast. Also, I had to figure out how the bike worked.

My friend introduced me to the teacher, who was very nice and helpful. She had me stand next to the bike, and then adjust the seat until it was about at my hip height. I then got on the bike and made sure that I had a little bend in my knee when the pedal was all the way to the bottom. She then tightened the straps around my feet and made sure to tell me that I want to press down with my heels and up with your toes when pedalling. That way you’re really pushing with your whole foot. If you push with your toes, your calves are going to really be sore.

Also, there are times when you will be standing up pedaling. You need to make sure you are standing up straight…unless you are doing a set where you lean forward, and then straight back up.

The bike that you use isn’t just a normal stationary bike that you see in the rest of the gym. Not only do the pedals have straps around the whole front of your foot, but the display in the middle of the handle bars is different too. It has a little lever at the bottom, which you adjust as the instructor shouts out numbers. This is the resistance that makes it easier/harder to pedal. It also displays the RPM’s (Revolutions Per Minute of the wheels,) the distance, and your heart rate (if you attach a monitor.)

What Happens During Class

I don’t know about you, but I thought it was just going to be pedaling the bike while the instructor shouted to go faster and faster.

It was so much more…and so much better!

The class started with a warm-up song. Not only did we pedal our feet, but we did arm stretches, and upper body stretches.

The instructor then explained what we would be doing during the class. Now, this may be completely different in each spin class, but this is how ours went. Each song was a different type of workout:

So, what did I think of spinning class? Was it as scary as I thought it would be?

I was still a little nervous as I sat on the bike at the beginning of class. I was worried I wouldn’t be able to switch levels and keep up with what the instructor was saying. However, I didn’t really feel self-conscious because everyone was pretty focused on their own bikes and workout.

I was able to change levels just fine, but it took me a little bit to get the hang of keeping the RPM’s where the instructor wanted them to be. I think it’s probably something you get the feel for as you do it more often. You will know how fast you need to pedal to hit that certain number.

Standing up on the bike was a little tricky at first, but that also improved during the class.

I did notice the “regulars” were able to move their arms (one at a time) while standing, and also pedaled most of the time without holding the handle bars. That is something I’ll have to work up to.

Overall, I would definitely take another spinning class. It was a great workout, it was something different, and the class went by really fast.

How about you? Do you spin? What other exercise classes do you take? What would you like me to try next for next Tuesday?