You are here: Home / SIUGR / Growth Restriction in Single and Multiple Pregnancies

Intrauterine growth restriction (IUGR) refers to a condition in which an unborn baby is smaller than it should be because it is not growing at a normal rate inside the womb.

The cause intrauterine growth restriction isn’t always known. It can be due to conditions of the placenta, the umbilical cord, or even the mother’s health, like pregnancy induced hypertension (high blood pressure.) When a baby isn’t growing as it should, the only treatment is constant monitoring. There is no way to help a baby grow at a faster rate inside the womb, so early delivery may be the only option.

I think the scariest thing about IUGR/SIUGR is the uncertainty. Doctors can never predict when the baby will run out of placenta and stop growing. The waiting, hoping, and praying can be so difficult. You want to do what is best for your baby, but you’re not sure what that is.

Today, you will meet a Mom that had to face that uncertainty twice. She went through both IUGR and SIUGR. Her strength and her children’s strength is inspiring, and will bring hope to others going through a similar situation. 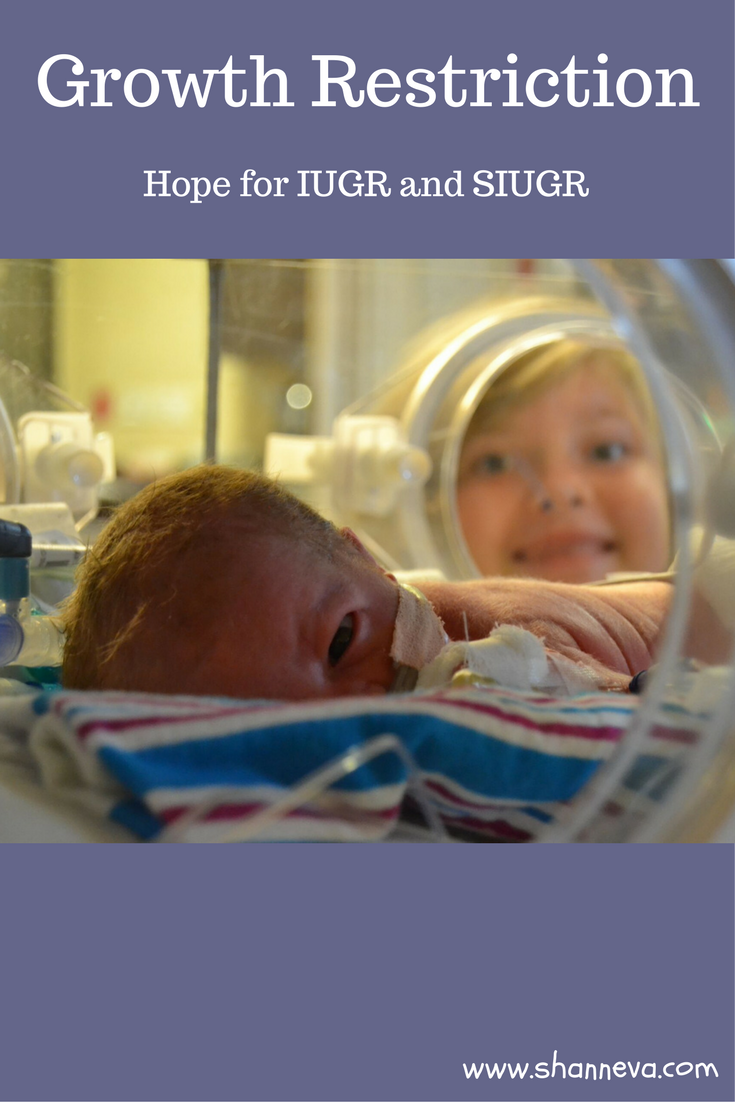 Please meet Audrey, James, Graham, and Henry as told by their mom, Marty. 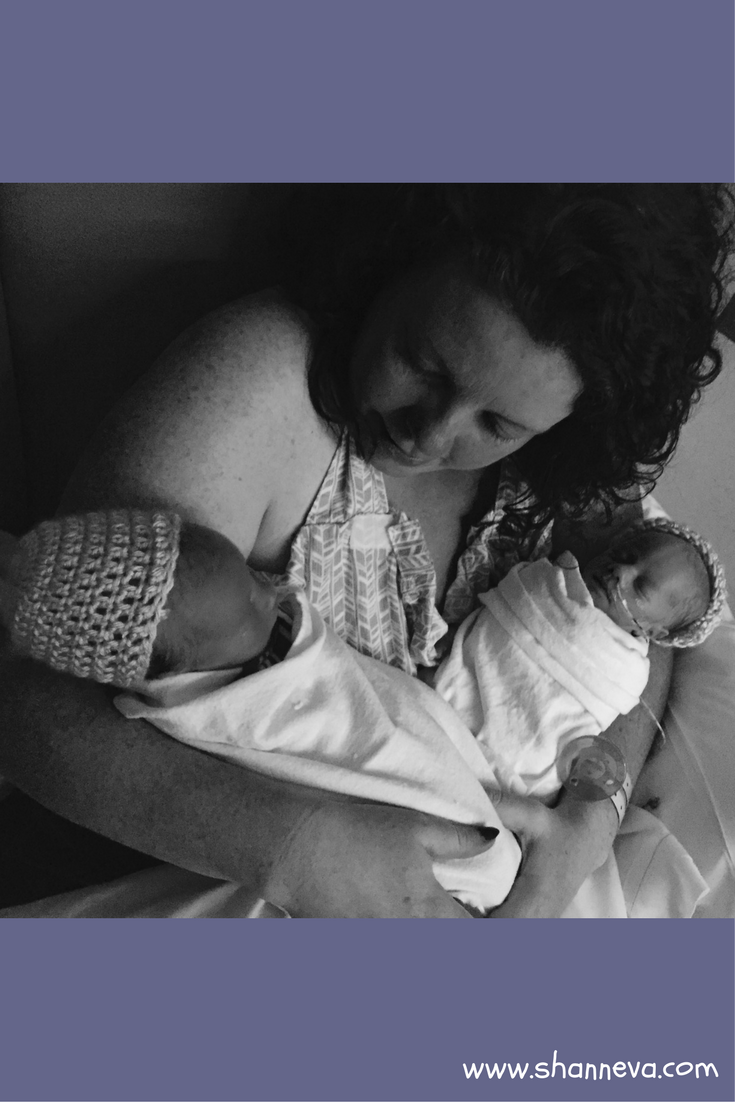 2. Do you know what caused your premature births?

With my first pregnancy, Audrey, I felt good and was never uncomfortable and didn’t understand why most women thought pregnancy was so hard. That was until I was diagnosed with intrauterine growth restriction (IUGR).

At 31 weeks, I was measuring small and so my doctor ordered an ultrasound for two weeks later. At 33 weeks, they estimated she was about the size of a 28 weeker and put me in the hospital for monitoring. They did not know why she was so small and we opted not to have an amnio done since we were so far along in the pregnancy.

After five days, I was sent home and followed up with BPPs every three days.

At 35 weeks, there was virtually no more fluid left, so our tiny little girl was born. She was small but perfect. She did not need oxygen, but just needed to learn to feed, maintain her temperature, and get up to 4 lbs. After a 13 day NICU stay, we got to bring her home and now she is a beautiful, smart nine-year old. After delivery, the doctor realized the placenta had attached near a fibroid, which was most likely what impacted the blood flow, leading to IUGR. 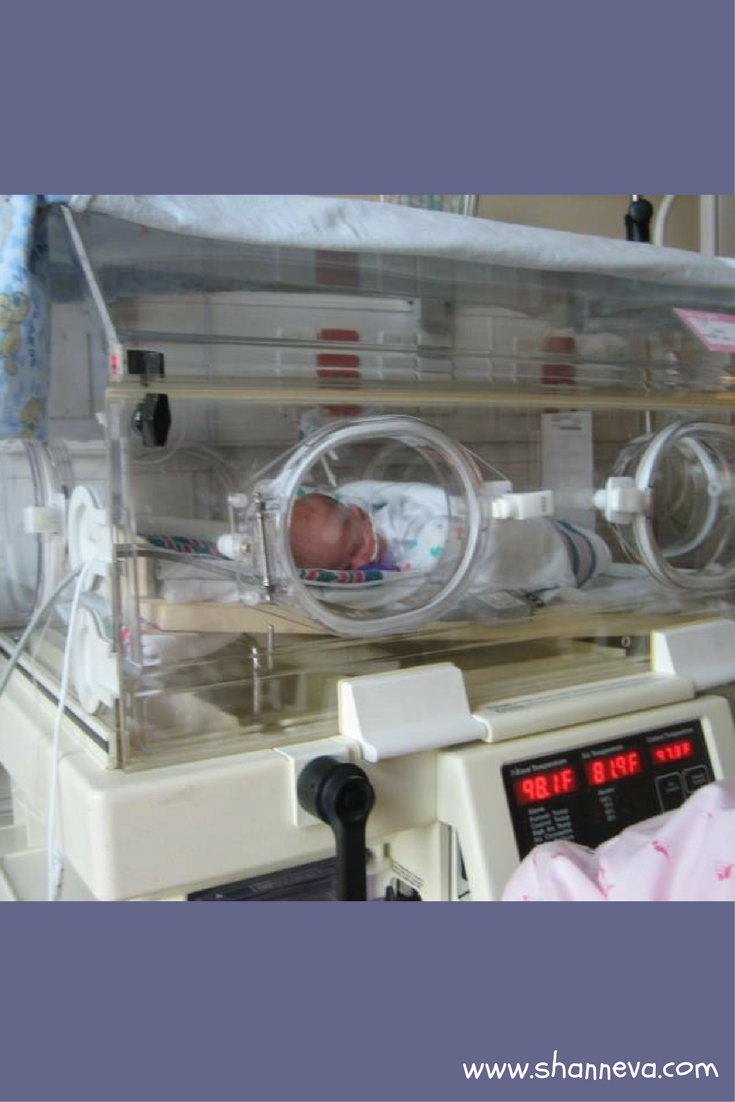 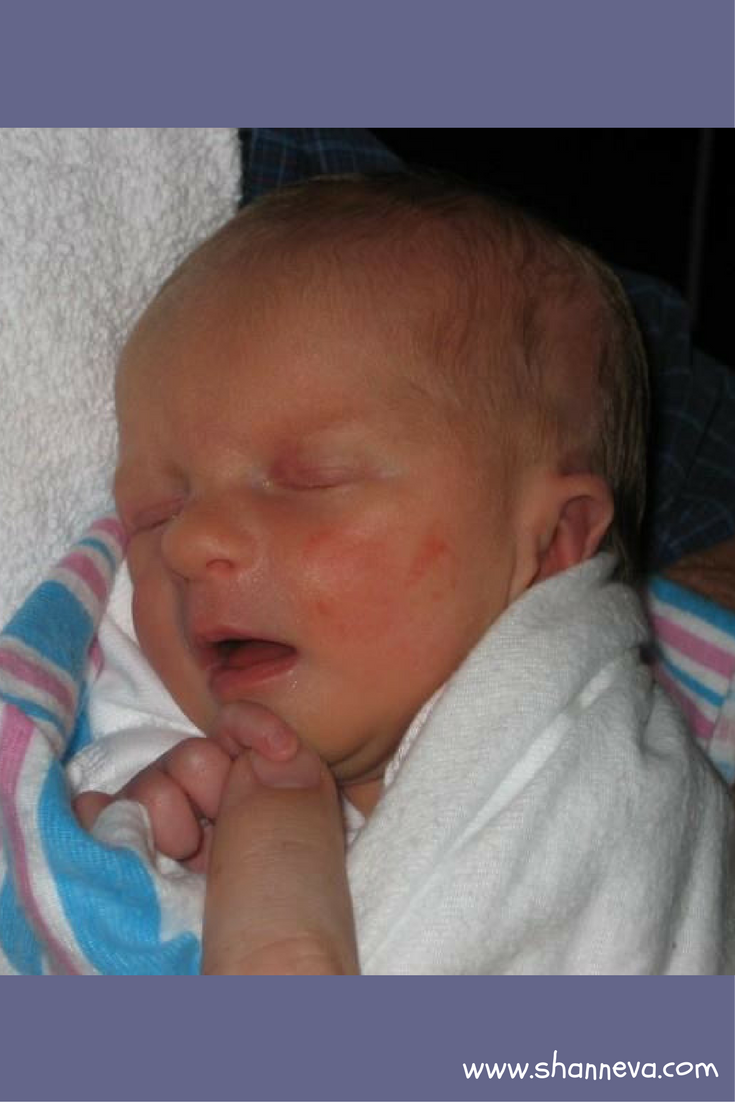 My second pregnancy was uneventful, except this time I was very uncomfortable. Fortunately the doctor’s answer to that was always, “congratulations you are pregnant with a normal sized baby”. James is now a happy, healthy six-year-old.

We thought our family was complete with Audrey and James, and we were surprised to find out I was pregnant again in 2015. To make it a double surprise, at the first ultrasound we were told it was identical twins! At that appointment, our very savvy ultrasound tech noticed a size difference between the two babies, even at only 12 weeks. My doctor immediately sent us to a maternal fetal medicine (MFM) specialist who initially diagnosed us with twin to twin transfusion syndrome (TTTS). We were devastated. Going from the surprise pregnancy to the shock of twins to news that we may lose one or both babies was devastating.

At this point we had stage 1 TTTS, and if it progressed to stage 3, we would be sent for intrauterine surgery to help improve the babies’ chances of survival. Between 15 and 19 weeks, we had bi-weekly MFM appointments and a were on standby to head out-of-town for surgery at any moment.

Then by 20 weeks the fluid levels normalized so instead of TTTS, the diagnosis was selective intrauterine growth restriction (SIUGR), the same general condition we had with Audrey, but “selective” because it was only affecting one twin. We had mixed feelings about this change. While it was a “better” situation to be in because we would not face the risks of surgery, the outcomes were statistically similar to having TTTS and the laser surgery (80% chance of both babies surviving and 90% chance of the larger baby surviving).

So, every week we had blood flow studies done and the results were mixed from week to week. At one point, the hospital we were consulting with suggested we consider selective reduction in order to give the larger twin a better chance of survival. We knew that was not an option for us and chose to continue with expectant management. Our goal was to make it to 28 weeks, since that was the earliest they would consider delivering. The doctors were not going to put the larger baby’s long-term health at risk in order to save the smaller baby.

The weeks of waiting were gut wrenching, and I felt like we were on an episode of “Private Practice”. While all of our friends and family knew we were expecting twins, very few knew the extent of the issues we faced. In addition to the smaller baby’s cord inserted at the far edge of the placenta, he also had a two vessel cord (three vessels is normal), so this was another challenge he faced in getting the proper blood flow he needed to survive.

We made it to 28 weeks, so set our next goal at 30. We still had ups and downs along the way, but after making it to 28 weeks, I viewed every day from that point forward as icing on the cake.

Finally,at 33 weeks, it was clear the smaller twin was no longer growing. It was time for them to be born. 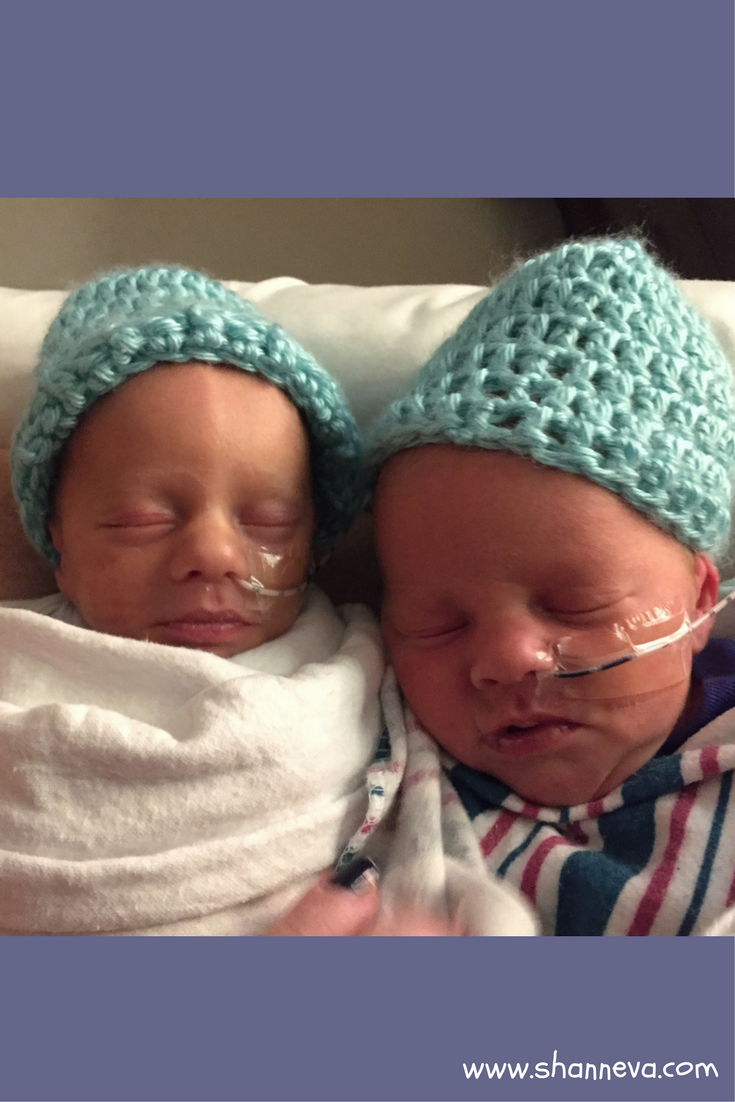 3. How long were your NICU stays?

We have spent a combined 37 days in the NICU (61 counting the twins separately). These are long, emotionally exhausting days, especially if you have older kids at home. We were fortunate that all of our NICU babies were by and large healthy. The twins both needed oxygen and CPAP for several days, then eventually transitioned to open bassinets once they could regulate their temperatures. The twins each had multiple episodes of bradycardias (drop in their heart rate) and were sent home on apnea monitors.

The hardest part of our NICU journey was leaving at the end of each day. Waiting out in front of the hospital watching all of the other moms go home with a baby in their arms was excruciating. But I just reminded myself that my babies were where they needed to be at that moment. When it was our time to leave, I would be the proudest mom out there. And then our turn came, and I was able to be the one out there taking my babies home.

4. How are you and your children doing today?

Today, all babies are doing great.

The twins were on apnea monitors for four months after coming home. Both suffered from bad reflux. But given the challenges and odds we faced during the pregnancy, to have our babies home was such a blessing. I know not all outcomes end up like ours, and there are many angel babies out there. Hopefully, medical advancements in preemie care will continue to improve so not only will the care for these tiny babies get better, but we will also know more about why prematurity occurs. 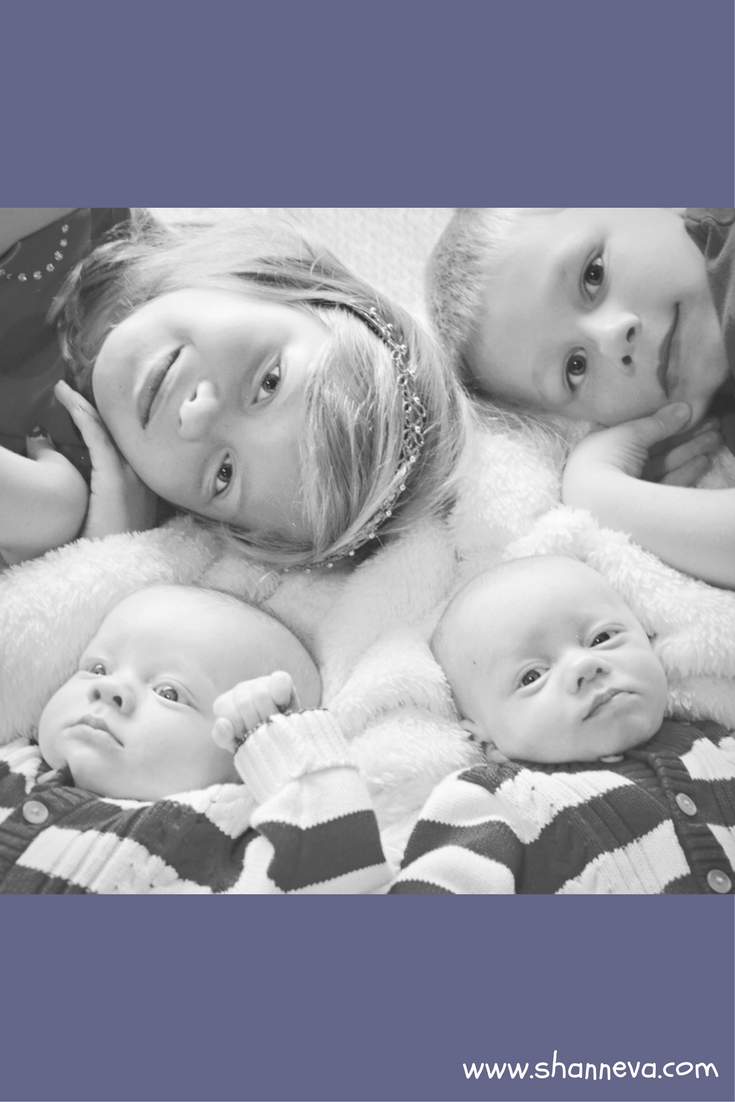 5. What advice do you have for other preemie parents?

I approached each NICU day like it was my job. I kept a journal of the babies’ weights each day, when they ate and how much, and any other milestones to be celebrated since that meant we were one step closer to going home. 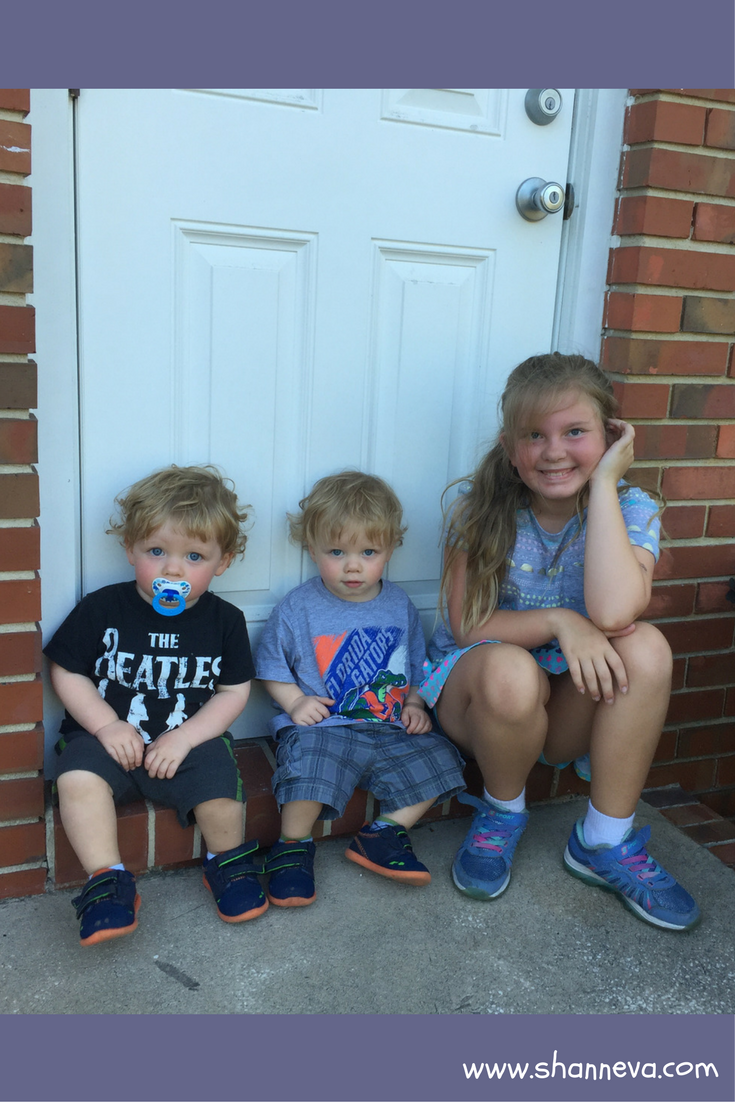 My advice to NICU mom’s and dads would be to take things one day at a time (or one hour or minute). Whatever helps get you through. Be sure to talk to the nurses and listen to their tips and advice. You may decide to take some and leave some, but always listen. Even though I already had two kids, I still learned a lot from the NICU nurses. They are angels on earth who have one of the hardest jobs out there.

Also, find other NICU parents to talk to, either through friends, in the same hospital, Facebook groups, etc. No one understands what it is like to have a baby in the NICU unless you have been there before.

Thank you so much to Marty for sharing her beautiful family with us. Not only does their story bring hope to other families, but she also shares some great advice for surviving the NICU.

Please leave any questions or supportive comments below.