As a family, we try to take a road trip or a small vacation each summer. Last year, we hit Minneapolis, and the year before that, it was Vegas.  This year we decided to stay in our home state of Wisconsin. With my accident, and with a bigger trip planned for Fall, we wanted to save money and just do something close to home. So, we took a couple of days off to hit Little Amerrika and House on the Rock. 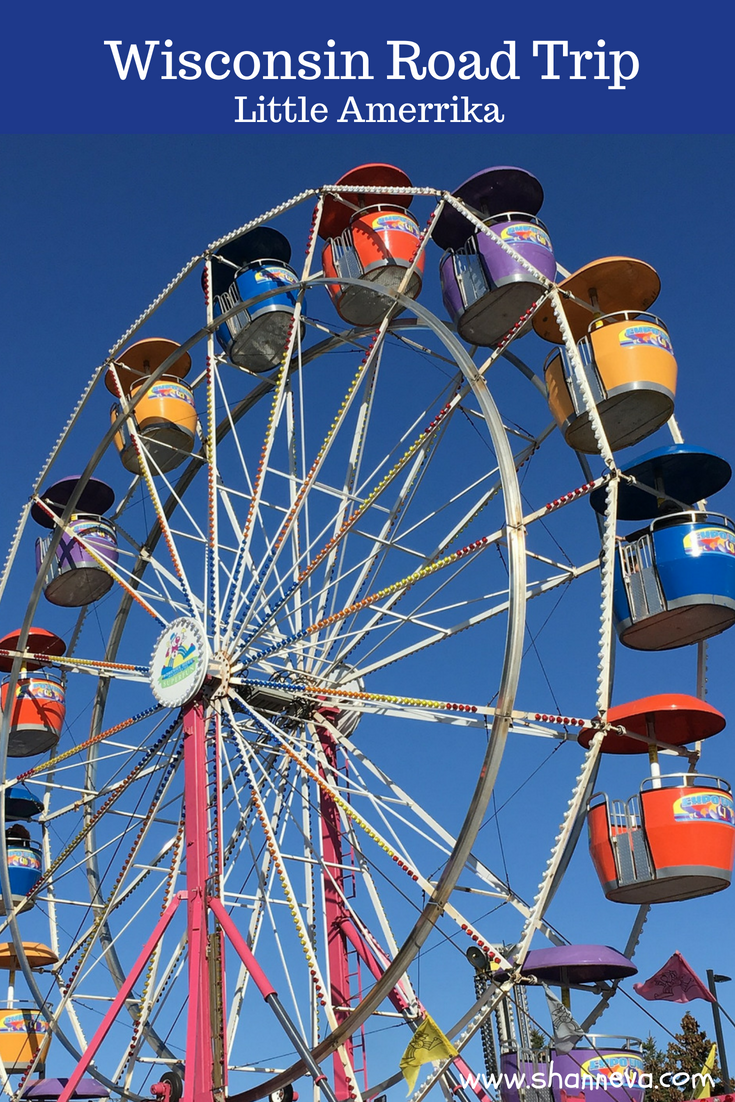 Little Amerrika is an amusement park in a small city called Marshall, Wisconsin. There’s really not much else in the immediate area, so we decided to stay in Madison, which is only about a 30 minute drive.

We originally planned to do our trip in reverse order, with House on the Rock on Sunday, and Little Amerrika on Monday. I thought an amusement park would be less crowded on a Monday, however, I’d been watching the weather forecast all week. Thunderstorms were predicted. Since the park closes during bad weather, we decided to change our plans around.

We left late on Saturday to spend the night in Madison. That way, we could relax and take our time in the morning, since the park doesn’t open until noon. With our original plans, we were going to stay near House on the rock the first night, but since that changed, I also changed all of our hotel reservations for Madison. I would have liked to stay at the same place the whole time, but the original hotel was too expensive on a Saturday night. So, I used Priceline and found a much cheaper option.

Little Amerrika is perfect for young kids, since the rides are fairly small. It’s also great for families because it is really inexpensive, and you can often find deals on tickets. I purchased our wristbands (which gives you unlimited rides) on Groupon earlier in the summer.

After sleeping in (that’s 7 am for our kids!) and hitting up IHOP for some pancakes, we relaxed in our room for a while. 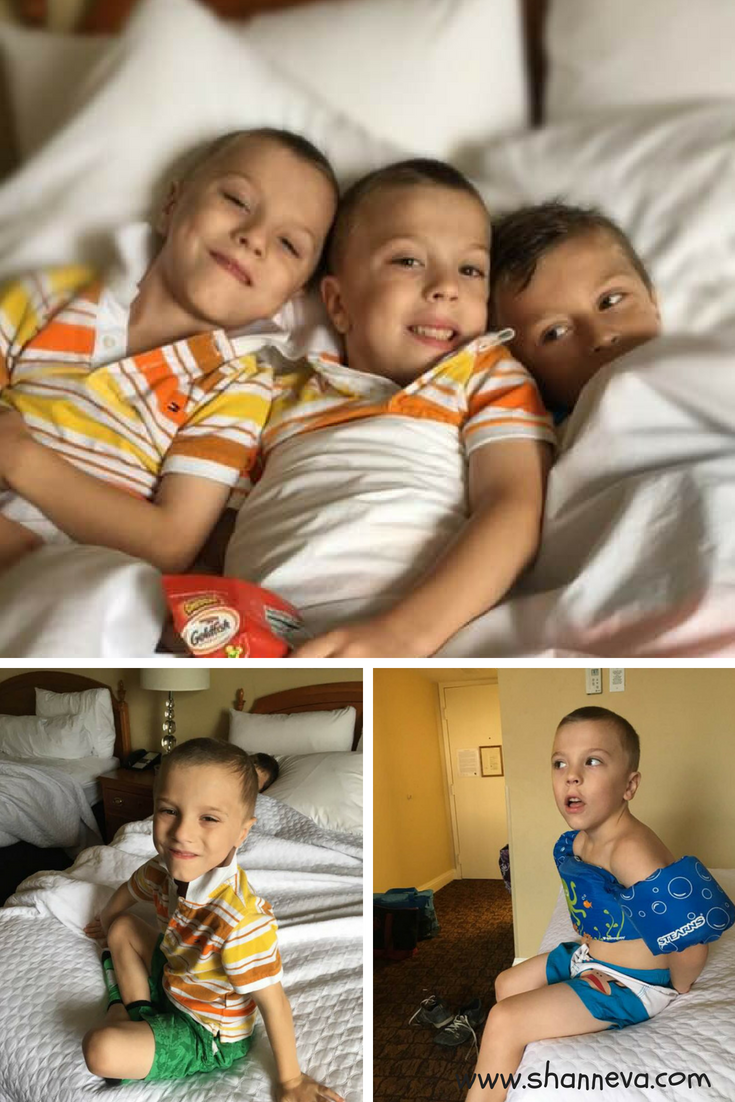 Then, it was time to sunscreen up and head to the park. The boys were mostly excited, although a little afraid the rides might be too scary. All three have recently taken on my of rides and motion.

It was sunny and hot, which was awesome. When we arrived, it didn’t seem very crowded either.

We got there a few minutes before the park opened, waited in line behind one family, and then got our wristbands.

First up, a look around the park.

There were a number of rides for the twins, plus they were super excited about riding the train. It had set times that it left the station, and we had a half hour free, so we split up. Andy took Mr. B on the big roller coasters, while I took the twins on some smaller rides. 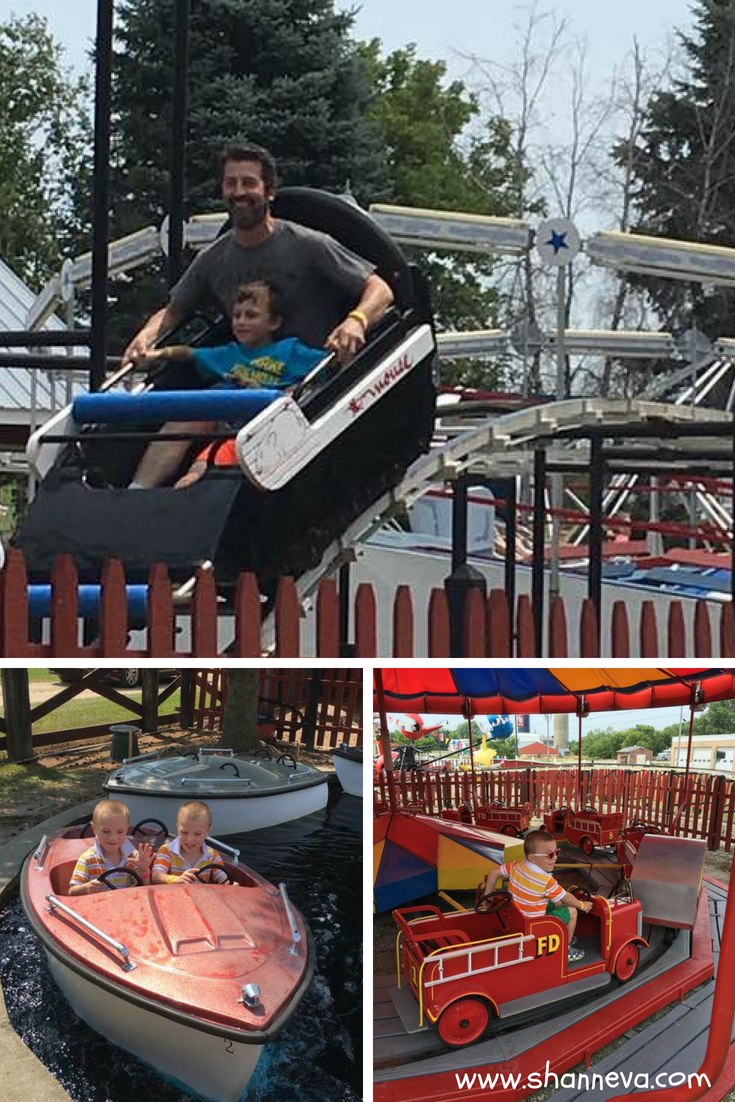 We then got some drinks and headed for a train ride.

The twins loved it, and it was a nice break from the sun. It went in a big loop, and took about 30 minutes. We got to see some animals on the surrounding farms, and we even saw 2 zebras? I’m not sure how or why there were zebras in Wisconsin, but they were really cool to see.

After we left the train, it was time for a few more rides, and then lunch.

Lunch was standard amusement park food, like burgers and nuggets, but also not too expensive.

Then, back to the rides. We did bumper cars as entire family, then split up again with kiddie rides for the twins, and big stuff for Mr. B and Dad. Plus, I took Mr. B on the giant ferris wheel, since my husband doesn’t like heights too much.

I have to say, the most memorable part of the day for me was their “fun” house. It looked like a creepy old house from the outside, and I double checked with each boy to make sure they really wanted to go in. They all were insistent, and wanted to be scared.

And scared they were.

There really wasn’t much to it, except it was complete blackness. I had a twin on each side, and couldn’t see anything at all. Both twins were screaming the entire time. I was laughing hysterically. Between them pushing me, and not being able to even see my hand in front of my face, the whole situation was just ridiculous. I seriously had tears streaming down my cheeks from laughing so hard.

On the bright side, the twins never want to go to a haunted house or fun house at a carnival again. Hee hee. 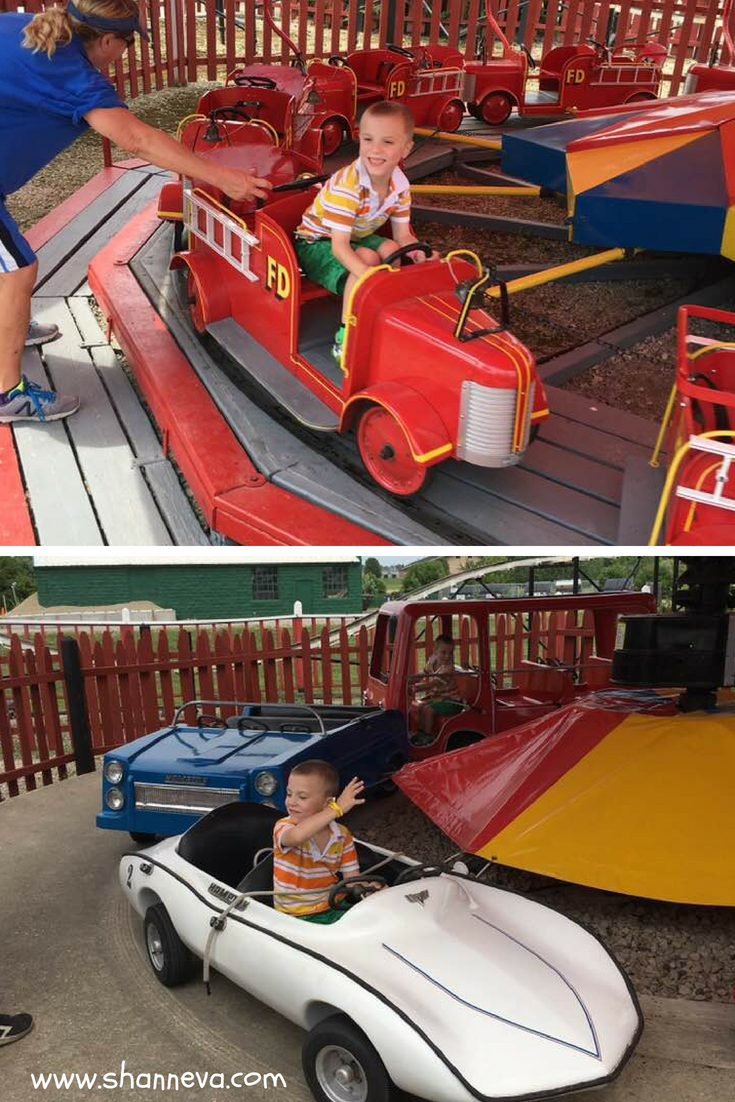 The park is only open for 5 hours each day during the summer. We thought it might not be enough time, but it was perfect. It was such a hot day, we were all exhausted.

So, we headed to our new hotel, had a swim, and grabbed dinner.

Luckily, our room was a suite, so we had plenty of room.

Unluckily, someone used the bathroom right away and clogged the toilet. Although, to be honest, I don’t think the plumbing was very good to begin with.

With about an inch of standing water in the bathroom, the maintenance man just looked at me with disgust, and the manager found us a new room.

Time to rest up for our next adventure….stay tuned.