Being a NICU nurse must be extremely hard, yet very rewarding. Watching them care for my twins, I gained so much respect and admiration for each and every one.

Not only does a NICU nurse care for the most delicate, fragile babies, but they also care for the parents of those babies. They are the people who are responsible for explaining what the doctors mean, that take every frantic phone call and calm them down, and just listen.

Each of my boys had a primary care nurse, and I relied on them so much. I know I cried to them, asked questions of them, and counted on them to take care of my babies when I couldn’t be there.

They are truly heroes to me.

Today I share not only the journey of an amazing micro preemie and her family, but also of a NICU nurse, her mom.

I’m so honored to introduce you to Blakelee, as told by her mom, Tessa. 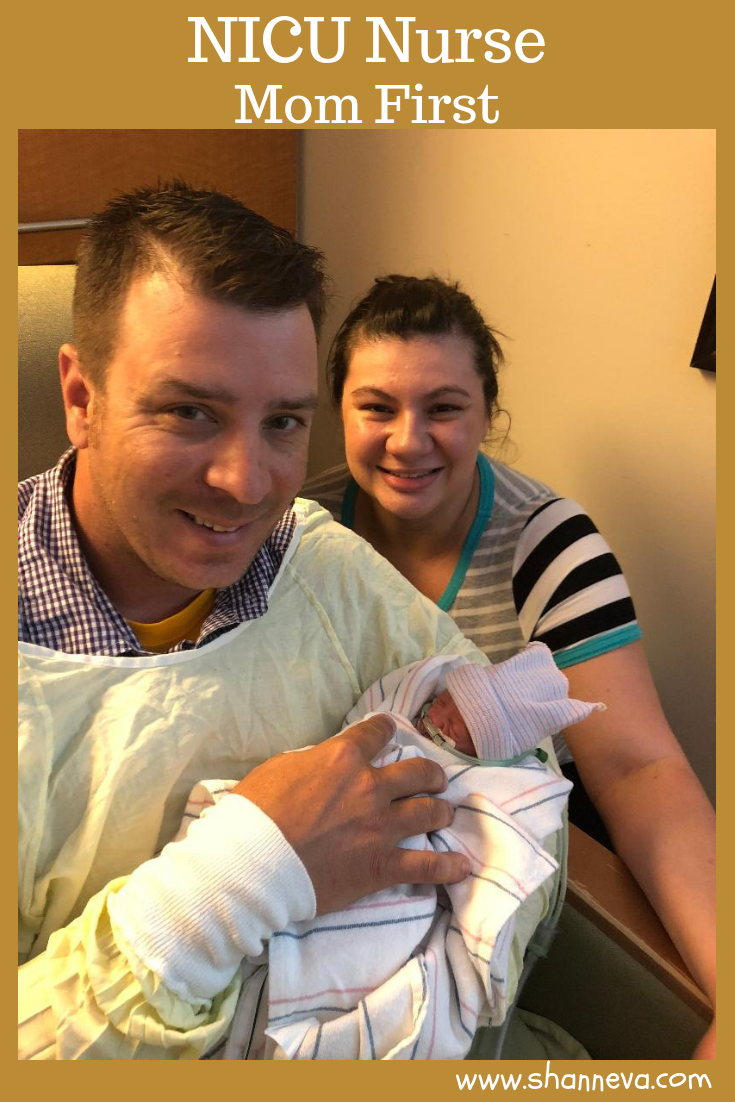 Blakelee Ryanne was born on September 26th at 20:35, weighing 1 lb 14 ounces. She was thirteen and a half inches long. 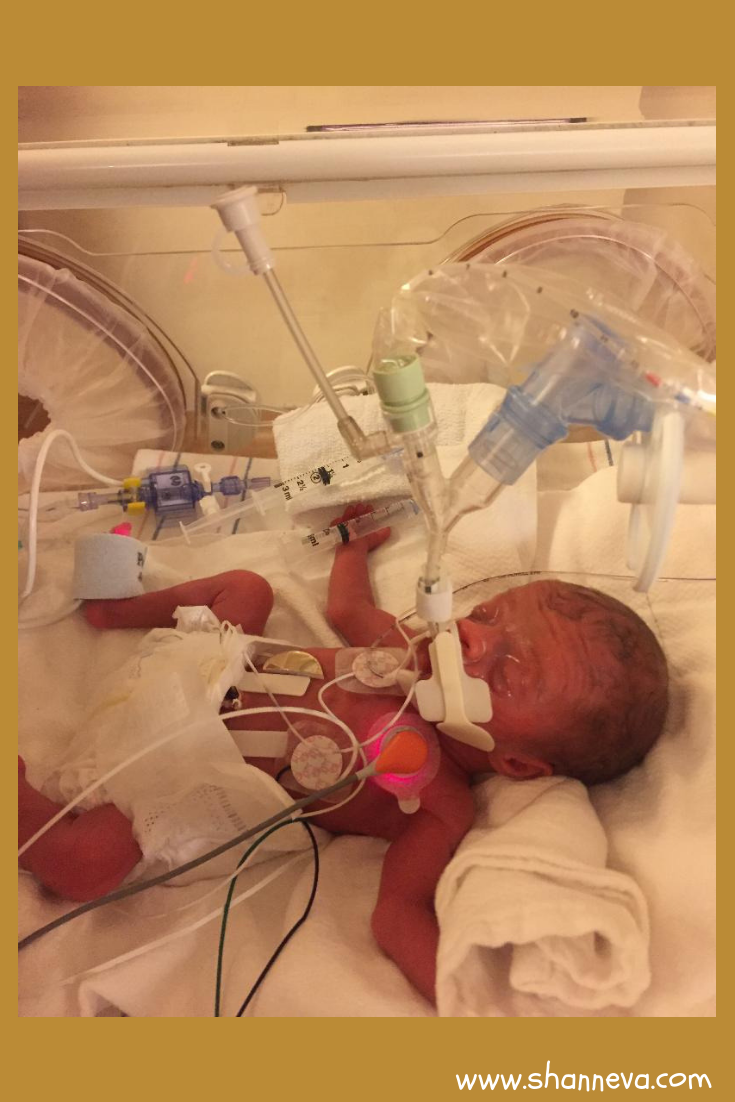 Today, we have been in the NICU for 32 days! Our due date was December 26th, so we plan to be there until then.

I also am a NICU nurse, so the hardest part for me is knowing every little thing that can go wrong and exactly how critical every moment is to her future development. I’m a control freak and it’s hard for me to let go of being a NICU nurse and to actually be a mom.

Blakelee spent a week on the HFOV before being extubated to bipap.

She is currently not on any respiratory support!!

I’m blessed to say that all three of her head ultrasounds have been negative for any signs of hemorrhages. She does have a small choroid plexus cyst on the left side. My sassy girl just made three pounds today!! We are so proud of what she’s accomplished so far!! We cannot wait until she is healthy enough to come home. Her big sister is ready for Santa Clause to bring her home!! 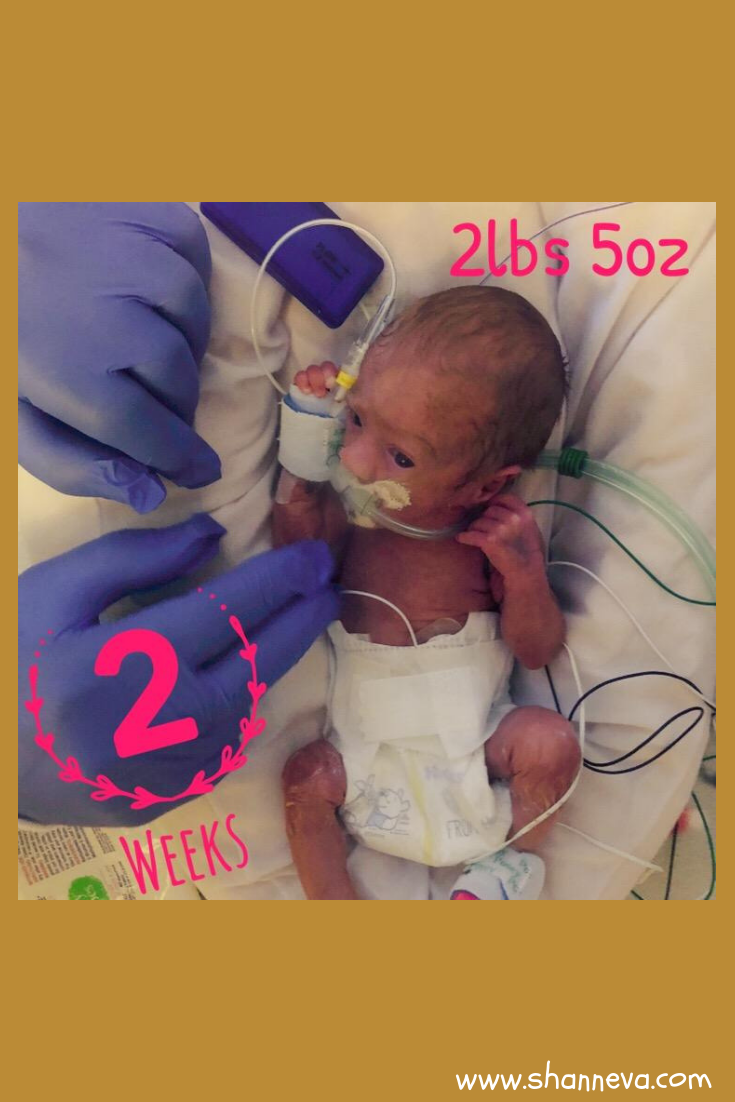 I am thirty-four years old, and this is my first pregnancy. I did not think that I would be able to get pregnant without surgical intervention. Severe endometriosis caused scarring to my Fallopian tubes, which caused them to be blocked on one side.

I found out I was pregnant at 6 weeks and was terrified that it could possibly be a tubal pregnancy, but my ultrasound came back good. Sister (I have a three-year-old step-daughter) had a strong heartbeat even at 6 weeks. My progesterone was extremely low, so I had to take progesterone until 12 weeks. One physician even told me to only be “cautiously optimistic” due to how low my levels were.

I also have hypothyroidism so I was receiving lab work every three weeks. We doubled my current medication, and even added a second medication to keep my levels where they needed to be.

I started swelling early on in pregnancy. I was wearing compression stockings to make it through work, so I knew that preeclampsia was gonna be something I might face.

At 23-24 weeks, my coworkers became extremely worried about my swelling. My blood pressures were high, but not drastically.

I was first admitted at 24 weeks for elevated blood pressures and did a 24 hour urine which my protein elevated. 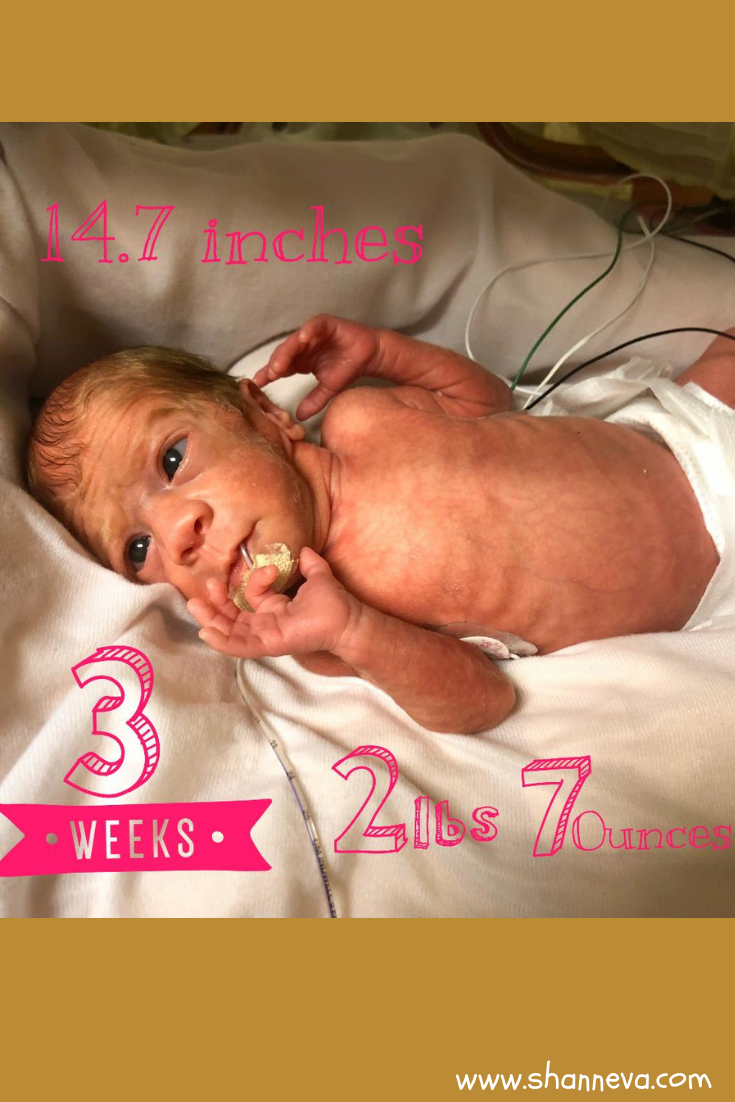 Five days later, I was admitted again, and my protein had tripled. That bought me another admission and bed rest. We started magnesium for 72 hours, and I got steroids at that point in hopes of heading home. About twelve hours after stopping the magnesium, I went into severe pulmonary edema. I could not breathe without oxygen support.

I have never been so scared in my life.

Six doses of Lasix were given to me over the next five days, and I put out an excessive amount of fluid. Even though my X-ray looked clearer, I still had trouble breathing.

I was started on blood pressure medication that Monday. That following Wednesday, I saw the specialist again, and she said if I required lasix or oxygen again that we would have to take her. I was 26 weeks and absolutely terrified.

My oxygen kept dropping, so I didn’t sleep at all that night. I have never prayed so much in my life.

I ended up making it one more week to the day before my liver enzymes tripled and my platelets began dropping. It was HELLP Syndrome, and I delivered at 27 weeks.

Two days passed before I got to see my baby girl. Her dad Face-Timed me and took lots of pictures, but my heart still hurt that I couldn’t be there.

I stayed in the hospital for five days after I delivered. I ended up having to add a third dose of medication on the day I was discharged and added a second medication shortly afterwards. We ended up doubling the second medication. The first medication that I was on three times a day causes bradycardia in infants. This is especially worrisome in a micro preemie. We had to stop giving her my milk and give her donor milk until I was able to wean off the medication. This hurt my heart so bad. I felt defeated and that the one thing I was able to do for her was hurting her.

Thankfully she is back on my milk and growing fast!! 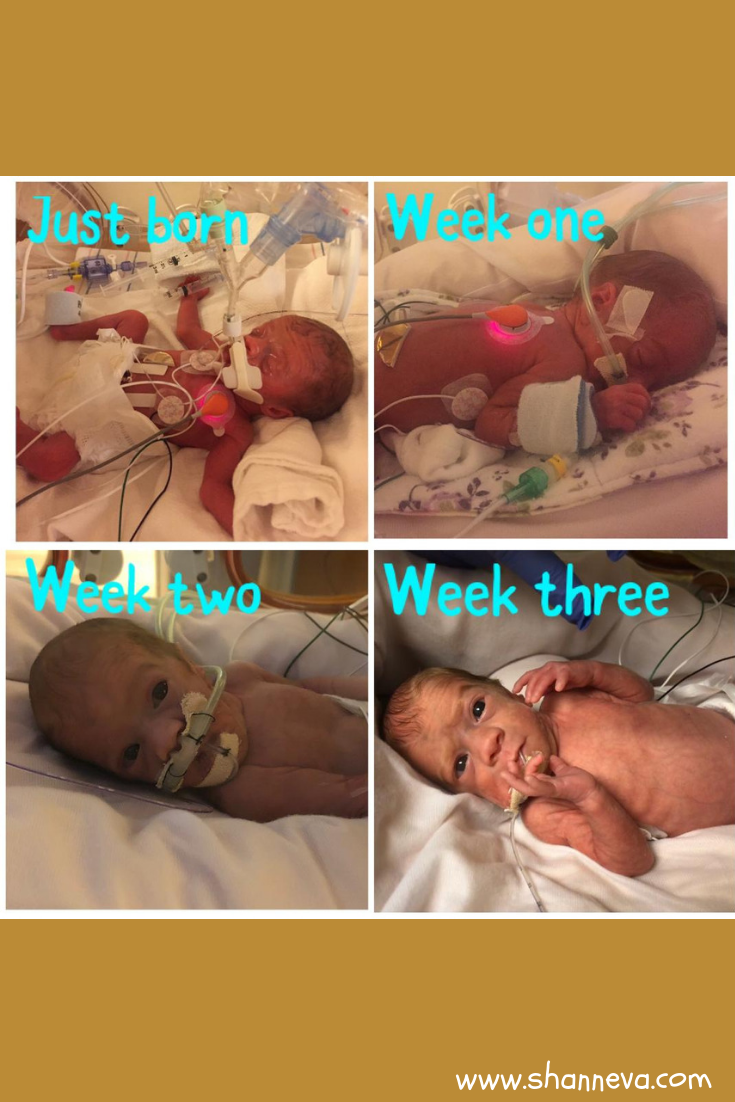 Blakelee is doing amazing, but we aren’t telling her that just yet!

Her doctors and nurses are in awe of how well she is doing. This has been a very emotional journey for her father and I. Thankfully we have each other to lean on for support when one of us gets down.

I am currently still on one blood pressure medication, and I’m still seeing my OB every two weeks. It has been a long road for both of us.

She told me that I’ve given her lots of grey hairs during this pregnancy!

I wish I had started a journal of her time in the NICU so I could look back on it. I’m only now thinking about it at one month old. I may still do it!

My advice to new Preemie families is to ask as many questions as you can and stay informed. 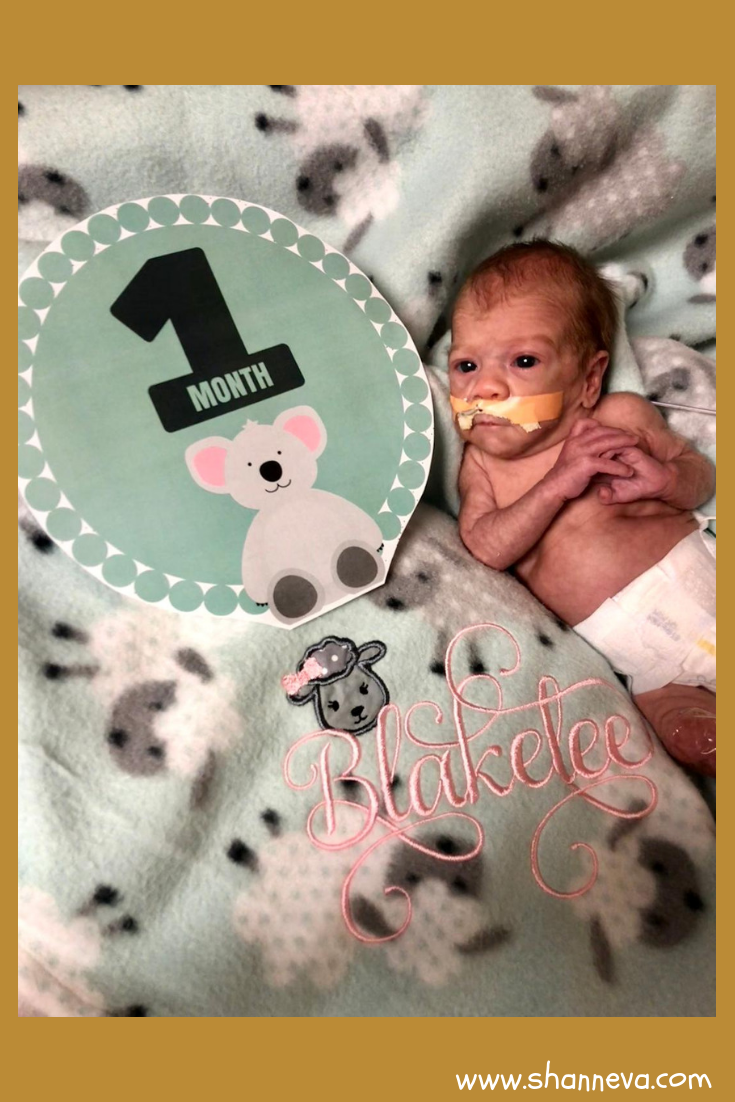 Thank you so much to Tessa for sharing sweet Blakelee with us. Also, thank you to Tessa for the amazing work she does as a NICU nurse, and to each and every NICU nurse out there. We love and appreciate you all!

Please leave any supportive questions or comments below.