You are here: Home / Blog / Practice Makes Progress and Other Life Lessons

You’ve probably heard the phrase “practice makes perfect” through the course of your life. However, perfection is pretty hard, if not impossible to attain. So, instead of setting myself and my family up for failure, we’re going with a new phrase around here: Practice makes progress! 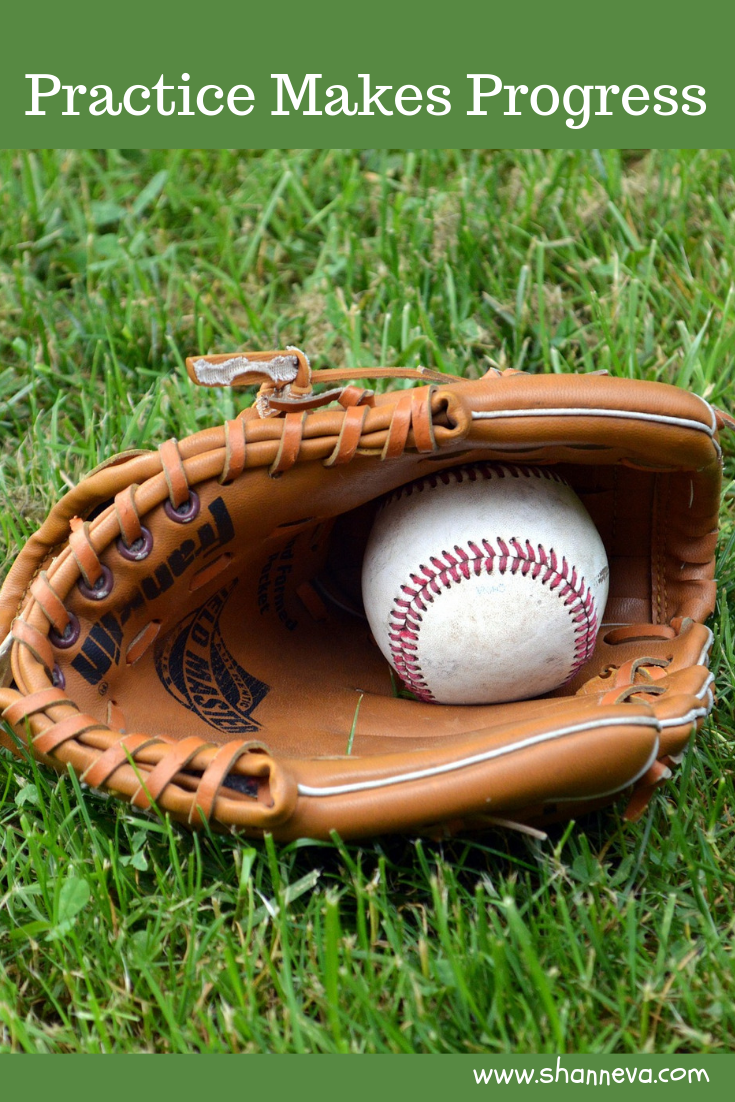 There has been a lot of practice going on around here lately, and I wanted to take some time to share a life update for our family. I’m so proud of the progress that we’re all making. Even though there are setbacks and challenges, celebrating the wins is important.

Today, I’ll share some updates about the boys, and later this week, I’ll let you know what me and my husband are up to. After reading, I hope you’ll share some of your wins and progress with me in the comments below.

Mr. B has been practicing a lot lately. He joined the running team at school, continues to play soccer with his team from the Fall, and has just started baseball with the Park and Recreation department. He’s been doing such a great job, and has made a great deal of progress.

Last Spring was his first time on a sports team. He joined our local soccer club after only a brief introduction class. It was definitely a learning experience for him. Not only did he have to learn the basics and rules of soccer, but he had to learn to work on a team. He really enjoyed running around, playing with his friends, and he worked hard.

This is now Mr. B’s third season on a soccer team, and he is looking great. He’s more comfortable on the field, he goes after the ball, and his stamina is unbelievable. He plays defense and finally realizes just how important it is for the team.

He also had his first baseball practice last week. Even though it was cold and the field was wet, he didn’t complain. He made some great catches, hit quite a few balls, and his arm is looking strong. I think it’s going to be a great baseball season.

This summer, he’s going to try golf and tennis for the first time. My husband is hoping he has some natural talent for golf, so he can become his caddy one day.

Not only is Mr. B involved in sports, but he’s also still in Scouts, he has signed up for band next year, and he finds plenty of time to create amazing Lego structures. He enjoys virtual building with Minecraft on the computer, making paper boats and airplanes, and drawing comics.

Plus, he’s finally becoming a reader! I caught him reading on his own this past weekend, and it made me so happy. No more bugging him to do his reading homework all the time. That is huge.

Mr. B also still loves everything to do with ancient Egypt, all things Star Wars, playing make believe in the front yard, and camping in the VW bus with Dad.

He’s lost seven teeth, loves hot showers as much as his mom, and is finally getting an appetite. It used to be a struggle to get him to eat, and now he finishes his entire plate and asks for more. Cheeseburgers and pizza are favorites.

I can’t believe he will be a fourth grader next year!

Just like their big brother, the twins have been making so many improvements. This year in Kindergarten has been amazing for them. It really is like night and day from last year.

I don’t have to fight with them or wipe back tears before the bus comes. They both love their teachers and have made great friends.

Both are reading above their level, printing neatly, and doing great with math.

Plus, they graduated from their IEPs!!!!

If you’re not familiar, an IEP is an Individualized Education Plan. Both boys needed extra help with speech and motor skills.

Mr. C actually graduated toward the middle of the year, and Mr. P just graduated a couple weeks ago. He had one sound he was working on, and it suddenly just clicked. He also had more trouble with fine motor, like zipping up his coat, but I’m happy to report he can do it all on his own now!

Somehow cars and trains are no longer in the regular playing rotation. I’m hoping they find love for them again, since we have about a million of each.

Also, the twins want to play soccer in the Fall. This will be their first time in an organized sport, so wish us luck. 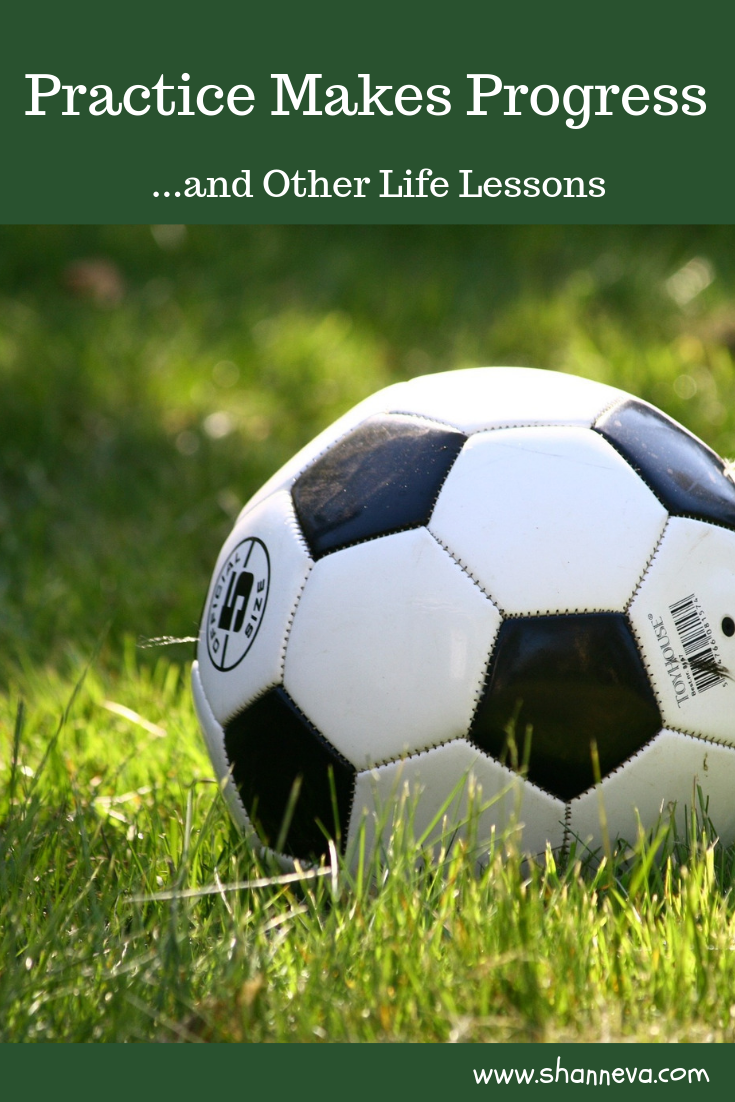 The challenges the twins have faced this Spring have been mainly health issues.

About 3 weeks ago, the twins had their wellness visit. They were both healthy, and are both growing along their own curves. Mr. C is average in weight and height, while Mr. P is hovering around the 3% mark. He’s always been low for both, but he continues to grow and is proportional with a good BMI, so the doctor is not concerned.

He does not eat as much as his twin brother, and sometimes we struggle with him being a picky eater.

Mr. P also failed his hearing exam. The doctor examined his ears, and there was fluid in both, which they concluded was the issue. He had this same problem last winter, and it resolved by summer.

Both boys are in need of their annual eye exam, as it’s important since they both had ROP as preemies. Mr. P also needs to be seen by a Neurosurgeon. He has a sacral dimple, and had an MRI when he was sedated for his surgery last year. His spinal cord appears to end earlier than it should, so the doctor wants a specialist to look at his films and evaluate him. On the plus side, he does not appear to have any physical symptoms, like trouble walking or bending, that are concerning.

Those appointments will take place in June, so I’ll keep you updated.

Unfortunately, Mr. P picked something up at the doctor. When he came home from school the next day, he had a fever.

I kept him home, and the fever went down with Tylenol, but the next day he was still feeling bad. He slept most of the afternoon, so I decided to take him back to the doctor.

His ear was still filled with fluid, but the doctor didn’t think it looked infected. He thought it was just a virus that had to run its course.

So, he stayed home one more day, and then seemed to feel better and the fever was gone.

The boys had their Spring music concert and did great. I could actually see them singing this year! Mr. C read a couple sentences on the microphone at the beginning. 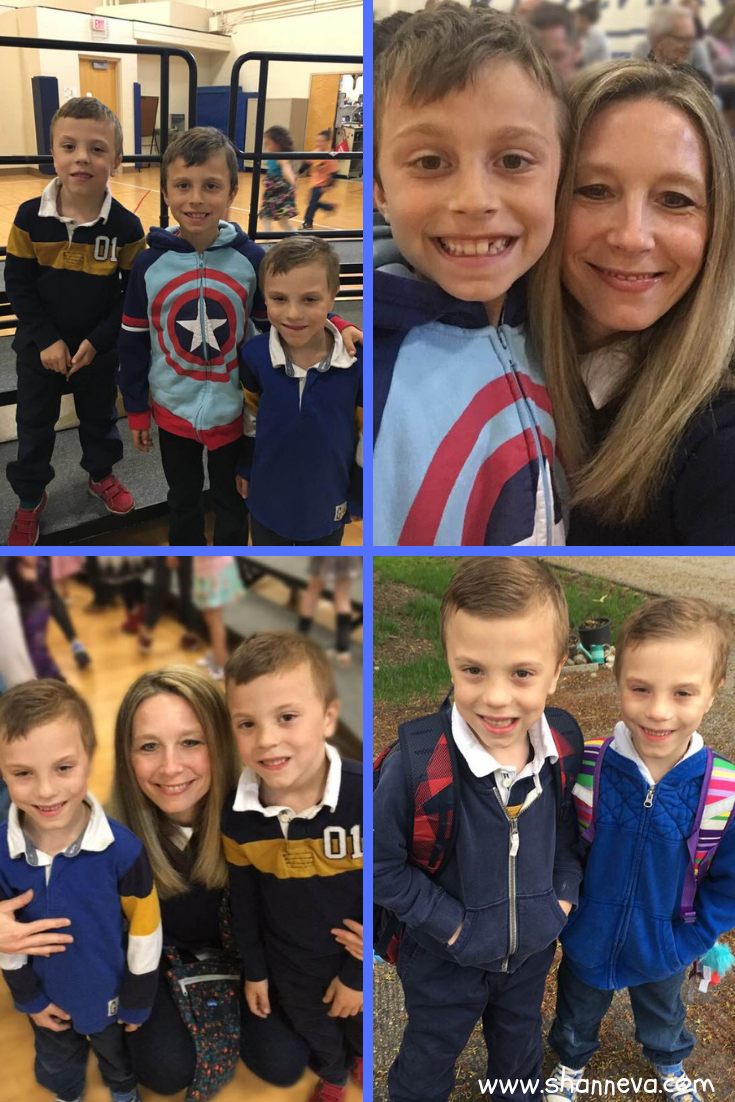 Mr. P cried after the concert because he said he was going to miss me. Turns out, I think he was still feeling bad. Later that night, his fever spiked again. This time is went to 103.1.

None of the boys ever had a fever that high before, so I called the doctor. She assured me that as long as it went down with alternating Tylenol and Advil, it wasn’t dangerous. It did, thank goodness. However, the next day, he complained of ear pain, so the doctor prescribed antibiotics.

With that, his fever was gone for good, and he was back to his normal self.

His appetite was worse than usual, and he did not want to go back to school.

Luckily, once he was back after that first day, he got into the routine again. He’s also back to his normal eating.

Even though the boys aren’t perfect, they always try hard, and aren’t afraid to fall down or make a mistake. I am so proud of all three of them. The progress each has made in just one year is so encouraging. I can’t wait to see how they continue to grow and change.