You are here: Home / Blog / Health Reset: When Life Gets in the Way

I was super excited about 2019. I set my goals for the month, and even came up with a word of the year. I was ready to take on new challenges and ready for a health reset. Eating less and moving more were at the top of the agenda. Life, however, had other plans for me and our family.

The boys headed back to school on the Wednesday, January 2nd, and I was eager to get back to routine. I got back to the gym, bought some healthy food options, and was ready to get my 10,000 steps in each day. I even started my yoga challenge.

One day later, and the health reset had to be put on hold. 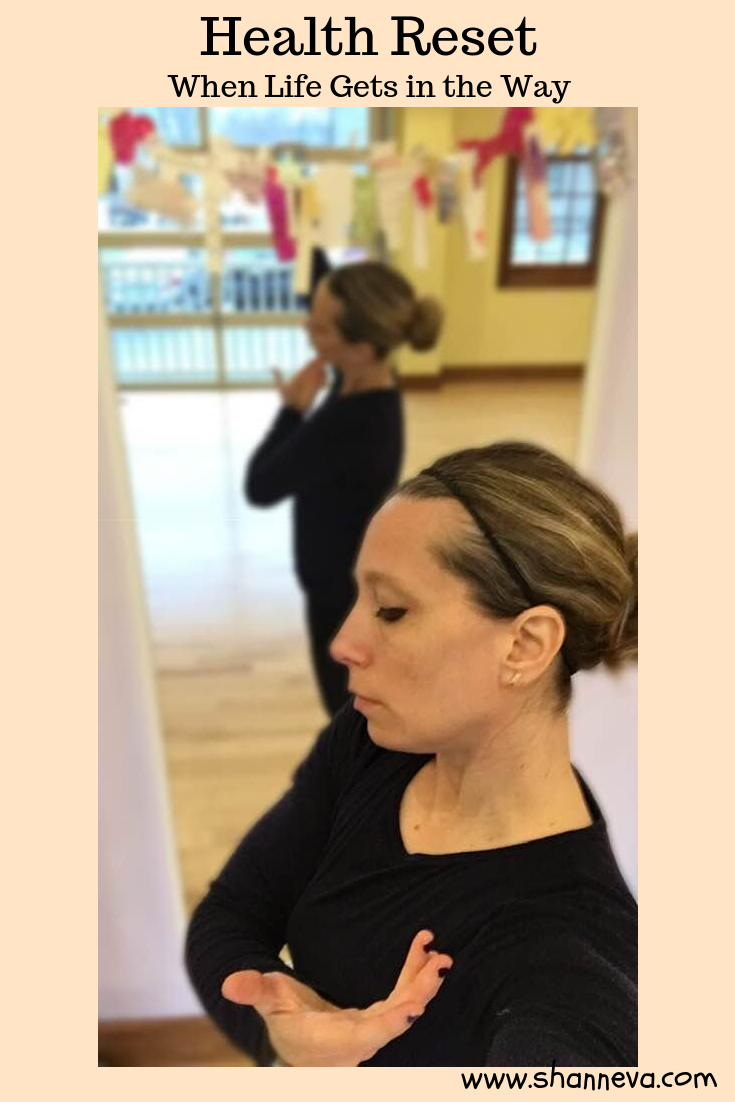 Day one was a success, but the second day back to school wasn’t so good. Mr. C woke up and said he felt yucky. He didn’t have a fever, and said nothing hurt. He didn’t eat much for breakfast, but said he wanted to try to go to school. His twin brother may have put a little pressure on the situation by tearing up when he thought he might have to go without his partner in crime.

So, I walked the boys to the bus, but made sure to tell Mr. C that if he felt sick, he should tell his teacher. I then went to workout, making sure to keep my phone with me. I got home and prepared to do some writing, when the call came.

“You need to come get your son. He vomited.”

Ugh. Never the call any mom wants to get.

I picked up my poor, sick boy, and made him comfortable in the living room. I set him up on a little pull-out couch we’ve had since the boys were little, with a plastic bucket, water, and saltine crackers close by. He only had a low-grade fever, but I kept checking the rest of the day.

I realized the kiss he gave me before he got on the bus that morning had been a giant mistake. Too late for me, but I could still save everyone else.

I striped his bed, wiped down remotes, handles, and light switches. I took all sippy cups and ran them through the dishwasher.

As soon as his brother’s got home, I tried to keep them separate, but I wasn’t sure where Mr. C had picked up the germs, so they could have already been infected. Only time would tell.

Friday night, Mr P said his tummy hurt, and I was starting to feel achy. By Saturday morning, Mr P was crying because he felt bad, and I felt like I had been hit by a truck.

I found someone to cover my dance classes, I set up both boys on the living room floor, and we all laid low the rest of the day. So much for moving more.

Not only did I feel physically bad, but I was so upset. I was really worried, as I always do when the boys get sick. So, my anxiety was pretty high.

I was also sad that I had to miss my MKE Mom’s party, and my husband’s holiday work party.

At least I wouldn’t be screwing up the eating part of my health reset by indulging in lots of food and drink. That was the only bright side I could come up with, but it didn’t make me feel any better.

By Monday morning, I was feeling OK, and headed back to work. I let the twins stay home for one more day, just to be safe. Luckily, my dad came to babysit.

The fighting that happened the rest of the afternoon let me know they were feeling much better, and Tuesday morning I was celebrating an empty house once again.

Instead of the gym, I took a walk/jog outside to get some sunshine, and my health reset was back on.

Wednesday morning, Mr. B was crying. He said he felt dizzy. Sure enough, he had a 101.5 degree fever.  Mr. P also said he didn’t feel good, and had a low-grade fever again.

So, in order to get Mr. C to even go to school, I called my Dad over and drove him to school. I told him how proud I was that he was brave enough to go to school without both of his brothers.

Then, I took care of my sick boys, and found new doctors for our whole family, since we changed insurance starting January 1.

Not my idea of fun, but hey, it was one of my monthly goals!

Between phone calls back and forth, running to check on the boys, and fetching them food/drink/blankets, I still was able to get my steps in. Again, bright side, right?

However, I made another mistake. I let both boys sleep in my bed for naps, forgetting that Mr. P still had a lingering cold.

Guess how mommy felt the next day?

Beside congestion and a cough for me, Mr. B still had no appetite, but his fever broke. Mr. P didn’t have a fever, but said his tummy hurt. So, again, two kiddos stayed home with me.

This time I had to bribe Mr. C with a special treat (after Christmas clearance toys for the win!) to go to school all by himself. He even agreed to take the bus.

The three of us all laid around until I had to work, and Grandpa once again came and saved the day.

Friday, everyone was healthy and ready for school. Well, Mr. P wasn’t, but without any symptoms of ANYTHING, he was going.

I had no energy, so no workouts for me. Well, unless you consider laundry a workout because I did a ton of that.

Over the weekend, we went back to our normally scheduled programming, still with less appetites (the boys) and a lot of congestion and coughing (me).

It was hard to see my boys so sick and disappointed that we missed out on things,  but I’m still looking for the good.

I will be working on eating better and moving more, and I want the boys to eat a healthier. I also want to include some supplements into their diets.

I do not want to go through that much sickness again!

So, how do you keep your family healthy during the cold/flu season? What are your favorite things to boost the immune system?